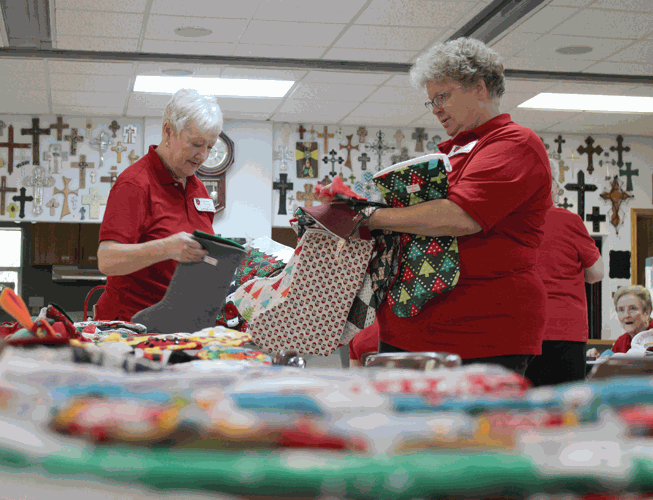 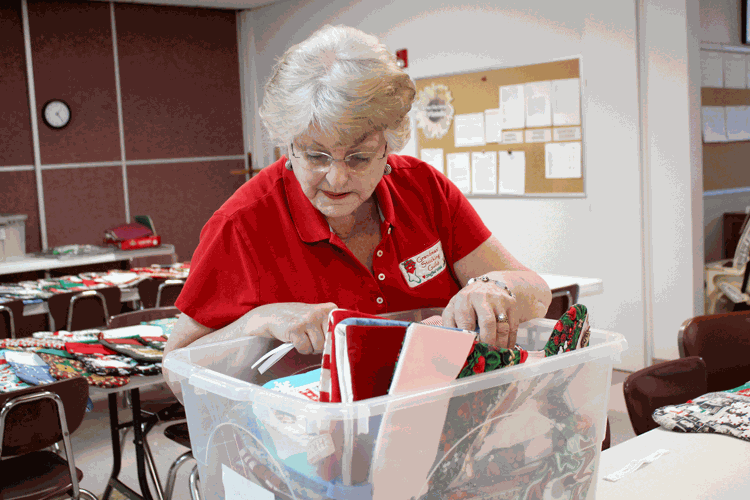 They are the ladies of Grandmas’ Stocking Guild.

The members of the guild responsible for bringing joy to children on Christmas have been assembling and decorating stockings since 2014 — a nonstop endeavor for the team.

The group, currently made up of about 80 individuals, mostly seniors, started by making 60 stockings for the children at New Life Children’s Center in Canyon Lake.

Fast forward to 2022 and they’re making them by the hundreds.

Now covering over 10 organizations and children’s homes spanning eight counties, the guild gets to work as soon as the holiday season wraps.

The group meets every year starting in January, and throughout the year conduct workshops where they create kits for volunteers and guild members to assemble and decorate at home.

Each stocking is made with care using donated fabric and, once constructed, are embellished with buttons, cutouts, bells and ribbon to form a one-of-a-kind design that makes the child receiving it feel truly special.

“I think of the joy they’re going to have on Christmas morning when they see (the stockings),” said Sandy Thomas, the guild’s president.

Before selecting the stockings for each child they are displayed in September for people to admire the craftsmanship and uniqueness of every stocking — each sewn with a label inside that reads: “Made with Love by Grandma.”

“That’s intentional so that they know there is some grandmother out there who loves them,” Thomas said.

“The name is so important,” Thomas said. “It may be the only thing they own that is personalized.”

Hundreds of stockings organized by theme lined the tables inside Grace Lutheran Church in San Marcos on pinning day — each one handmade for the children who’ve never received one — a number steadily growing every year.

“All children need love and every child needs love,” Thomas said. “I’ve always had a love for children and that’s just so close to my heart. We only have one grandchild, but I think of all of these as going to my grandkids — I think of them as my grandkids receiving a gift of love.”

By Thomas’ definition she has over 1,000 grandchildren this year.

Last year they had over 900 children from newborns to 18-year-olds to create stockings for.

The anonymous gratitude and joy the stockings provide to children who’ve experienced trauma is priceless for Joyce Eriksson.

“These kids are so thrilled with (the stockings),” Eriksson said. “They put it on the ends of their beds, they put it on their lockers, sometimes they sleep with them all year long — they just never want to give them up.”

While stuffing stockings with love is enjoyable in more ways than one, keeping up with the demand has been difficult for the group that’s in constant need of more surrogate grandmas.

“We’d like to be able to keep it going because … we’re getting older and tired and it’s hard to do,” Eriksson said.

Whether donating time by sewing stockings at home, fashioning supply kits or donating fabric, there are several ways to support the guild.

Those considering joining the guild, donating or to learn more about Grandmas’ Stocking Guild visit grandmasstockingguild.org.