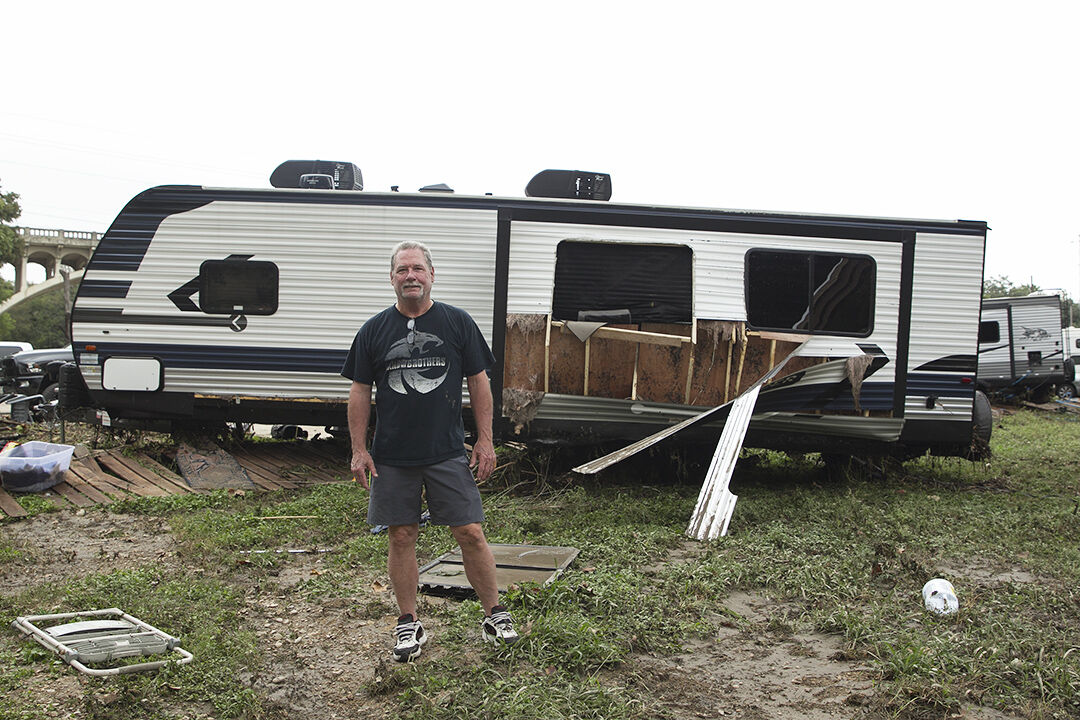 Donnie Long stands in front of his RV at the River Ranch RV Resort Thursday, Oct. 14, 2021 in New Braunfels. Flooding overnight from the Guadalupe River flipped his RV over on its side and caused damage throughout the park. 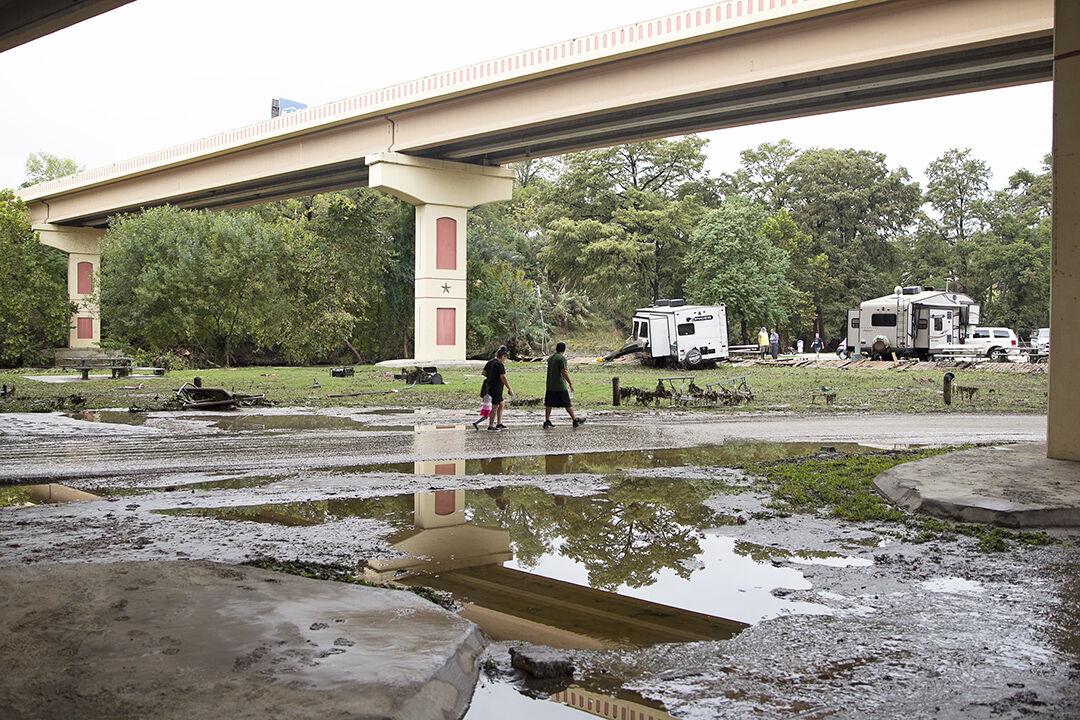 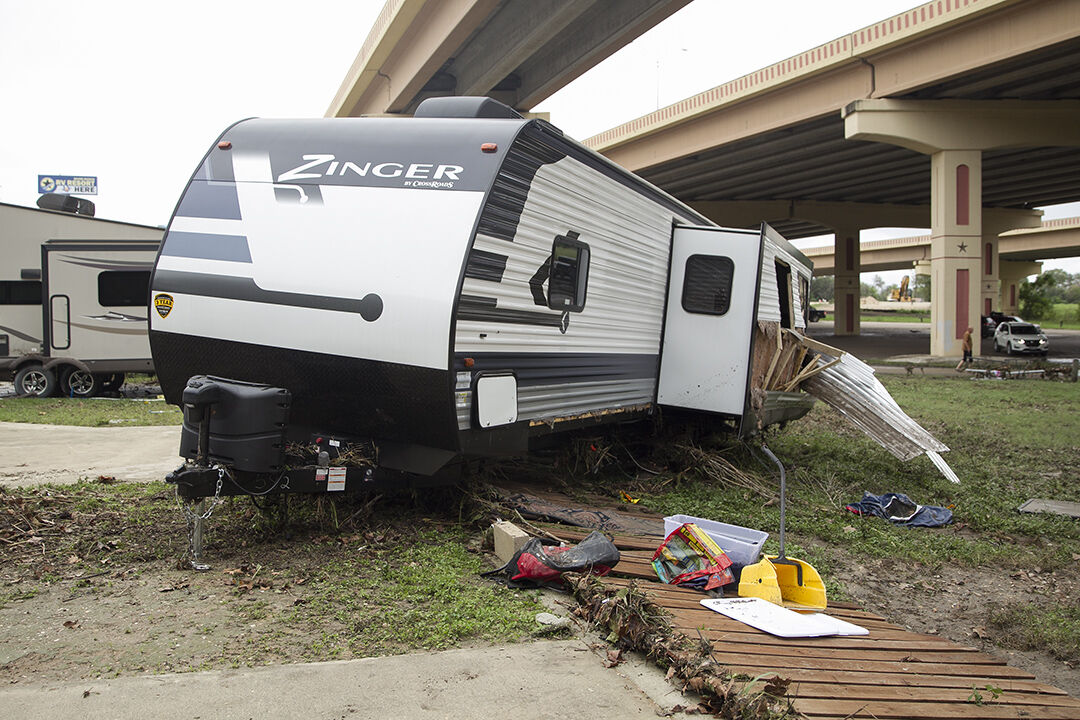 Flooding overnight Thursday, Oct. 14, 2021 at the River Ranch RV Resort in New Braunfels flipped Donnie Long's RV over on its side. 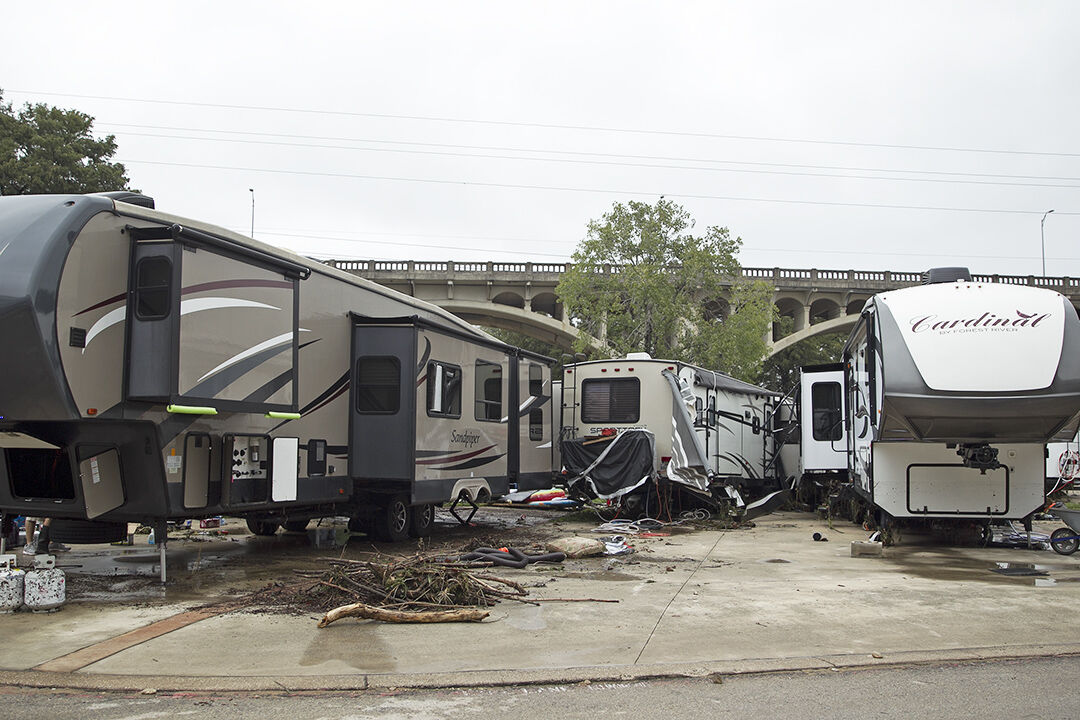 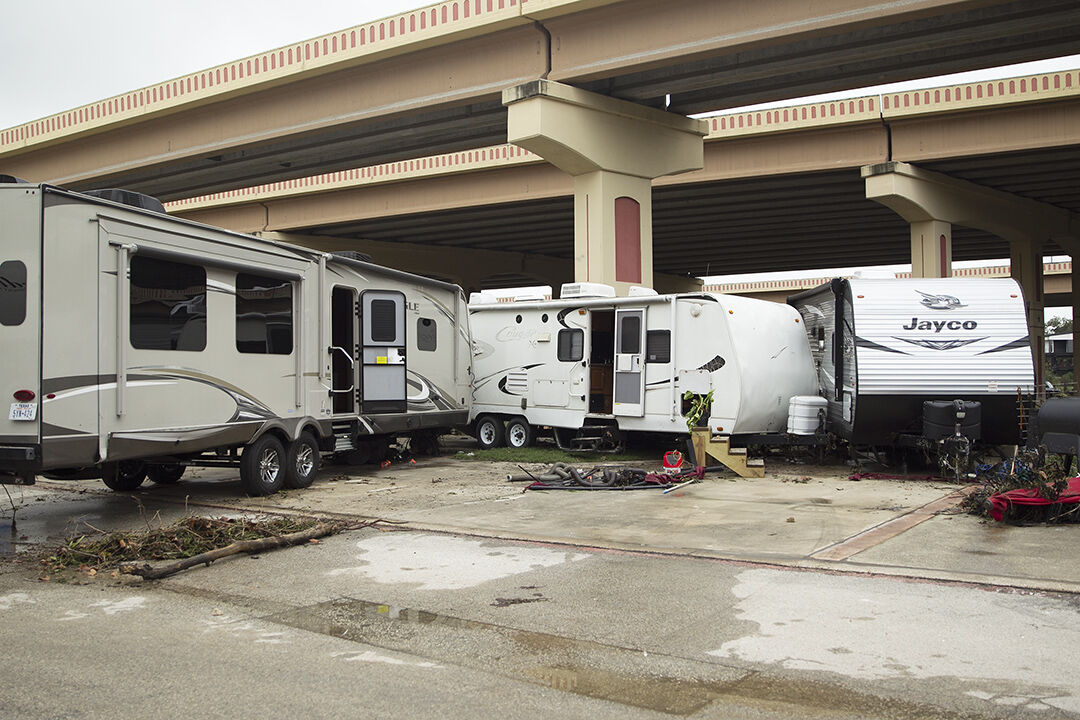 Donnie Long stands in front of his RV at the River Ranch RV Resort Thursday, Oct. 14, 2021 in New Braunfels. Flooding overnight from the Guadalupe River flipped his RV over on its side and caused damage throughout the park.

Flooding overnight Thursday, Oct. 14, 2021 at the River Ranch RV Resort in New Braunfels flipped Donnie Long's RV over on its side.

High-water sirens might have saved the lives of campers at River Ranch RV Resort, which was cleaning up in the aftermath of heavy rains that swelled the Guadalupe River overnight into Thursday.

“A lot of trailers moved around (by the rain) and we lost one but we found it,” said one employee, who credited sirens for alerting dozens of campers to head to higher ground as more than two inches of rain sent the Guadalupe over its banks and into the park under the Interstate 35 overpass.

“There was no time to hook up the trailer – just time to get out,” one camper said. “There was water all over the place — we had 10 minutes to put on our clothes, get the dog and get out. We got to the truck and saw the camper floating down the river.”

That was the worst of it for New Braunfels and Comal County, which saw between 3.5 and 8 inches of rain — most of it between 11 p.m. and 1 a.m. — as tropical moisture from former hurricane Pamela brought heavy rain and flash flooding along a line extending from South Central Texas into Oklahoma, ahead of a cold front slated to move through the area Friday.

According to the Community Collaborative Rain Hail and Snow Network website, COCoRaHS.org, county rainfall totals ranged from 8 inches at the south end of Canyon Lake, to 6 and 7 inches in areas east of U.S. 281 and 3 to 4 inches along the Interstate 35 corridor.

At 10:45 a.m. the National Weather Service in Austin/San Antonio canceled the flash flood warning for southeastern Comal, western Caldwell, central Guadalupe and southeastern Hays counties that had been in effect since 11 p.m. Wednesday.

The NWS reported thunderstorms caused flooding of small creeks and streams, urban areas, highways, streets and underpasses as well as other poor drainage and low-lying areas. Affected areas outside the county included San Marcos, Buda and Kyle to the north, Seguin, McQueeney, Lockhart and Martindale to the east, and Schertz, Selma and Cibolo to the south.

There were several high water rescues throughout San Antonio, where first-responders were working to locate a woman and a 5-year-old girl were swept away by rushing waters near FM 1518 and Graytown Road in east Bexar County.

The city of New Braunfels closed access to the Guadalupe and Comal rivers within city limits. At 7 a.m., water flows on the Comal measured 3,680 cubic feet per second and the Guadalupe measured 5,740 cfs, both with poor water clarity, swift moving water and debris.

City officials will reevaluate river conditions on Friday to determine when river recreation can resume. At the same time, Comal ISD shut down operations and New Braunfels ISD announced more than a dozen bus routes would be late getting students to schools.

“Throughout the morning, our transportation supervisors have been evaluating the roadways and our Emergency Management Teams has been in contact with local authorities regarding road conditions in Comal ISD,” the district said in an email to parents. In an earlier statement, the district said it would be on a two-hour delayed start.

“While the severe weather has moved out of our area, residual flooding and road debris is still making it unsafe for our buses to travel along many of our secondary roads. Many of our areas are inaccessible at this time and it is not expected road conditions will improve this morning.”

“Due to inclement weather, we have been monitoring the roadways and found several that have been closed due to high water,” NBISD’s website said. “All of our campuses will be open at normal time for parents to drop off students.”

Later Thursday, Rebecca Villarreal, the district’s communications coordinator, said “we were able to run almost all of our bus routes this morning with only minimal delays. We had a few field trips and extracurricular (activity) buses that were canceled, but none of our athletic events have been canceled for today.”

“This is flash flooding and we get these rainfall events that (cause gauges) to go straight up,” he said. “Flood retardant structures on Dry Comal Creek are releasing water at a sustained rate, up to 2,000 cfs, and we’re monitoring automatic and manual devices on the low water crossing system.”

“None of them were rescues, they responded just in case,” he said. “One involved a resident was on one side of the high water and wanted to get to the other side, and another, at Altgelt Lane and Wald Road, was a man standing on the roof of his vehicle that stalled in something that was not a swift-water rescue situation.

“There were no injuries and no loss of life related to the storm.”

“NBU fared quite well through all of this,” said Melissa Krause, the utility’s chief communications and strategy officer. “We had a watermain break that was not storm-related we’re working on repairing and (installations of new water and sewer lines) are going along well.”

“It went offline in the morning and we’re working to bring flows in slowly as the water recedes there,” she said. “One of our water tanks at the Grandville (station) got water in it but we’re making repairs there as well. The storm also led to issues with radio communications for a short period which have also been restored.”

The NWS forecasts partly cloudy skies and high temperatures in the mid-80s Thursday afternoon and by 2 p.m. Friday before winds shift out of the north, gusting as high as 25 mph by mid-afternoon.

The front will drop dewpoints and overnight lows into the 50s, with highs in the low to mid-70s under mostly sunny skies through Monday.

Despite cleaning up mud and debris left by overnight storms two days ago, the city of New Br…