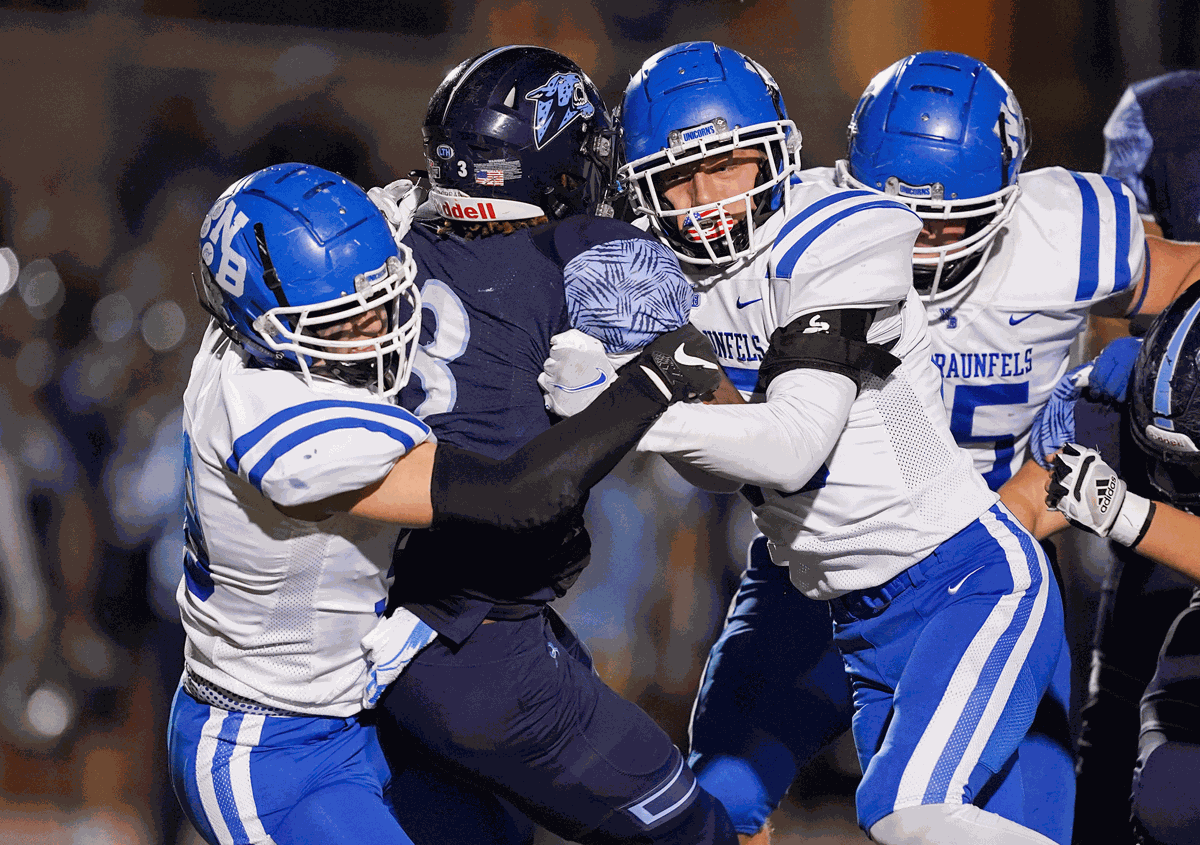 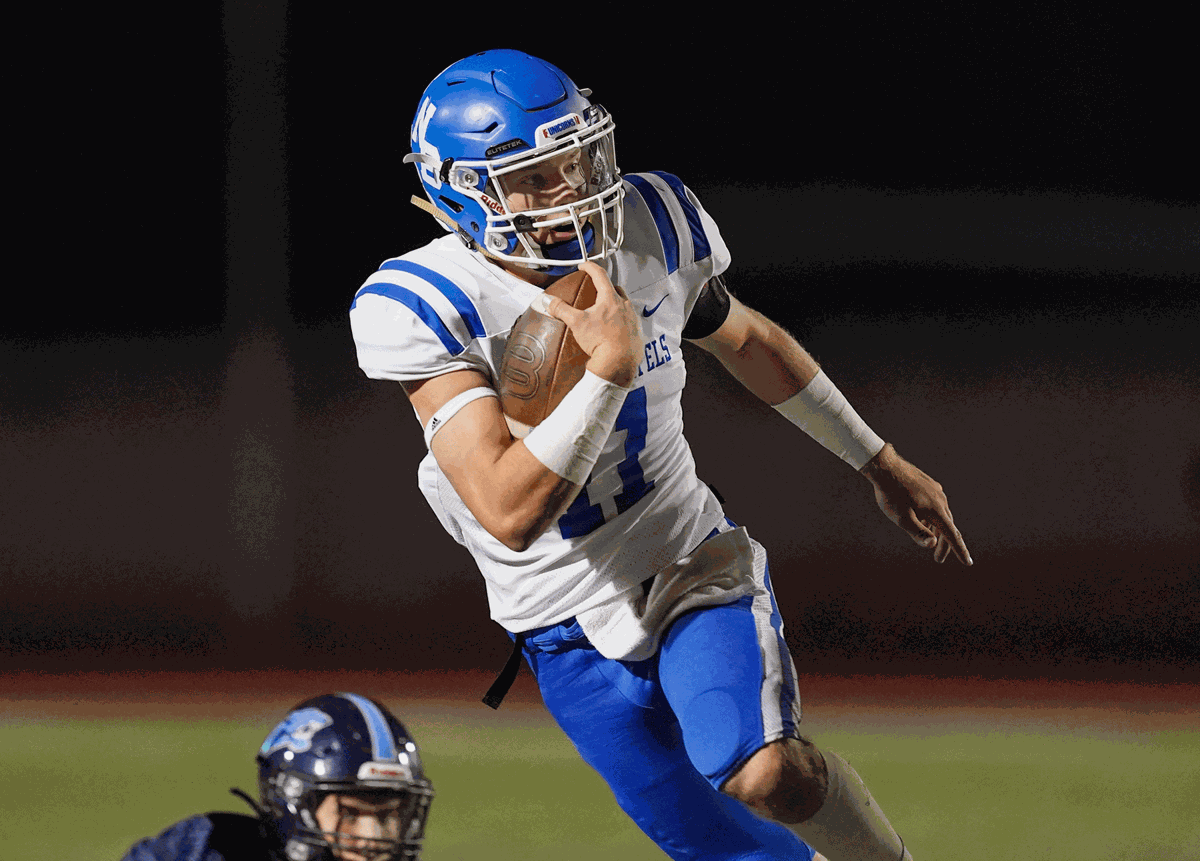 Quarterback Aiden Baumann sprints ahead for yardage during Friday’s win. 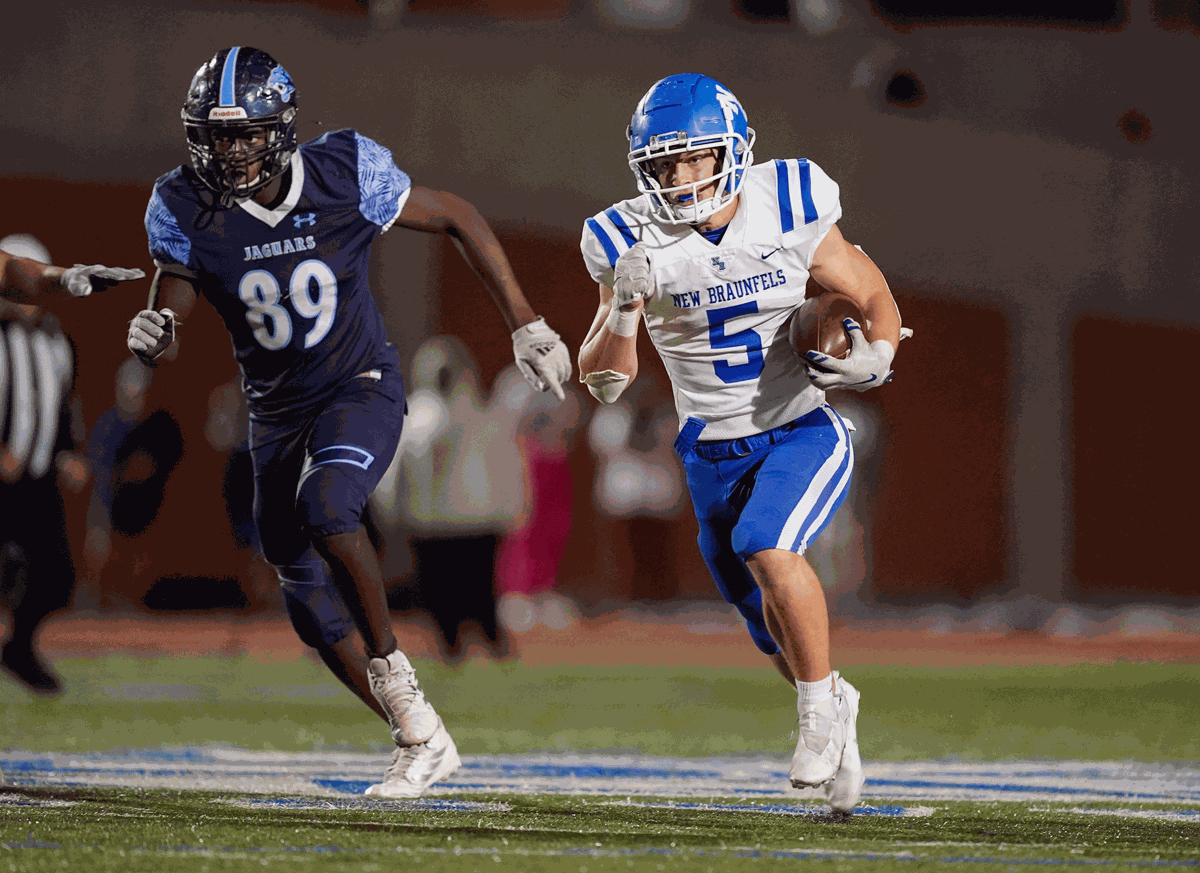 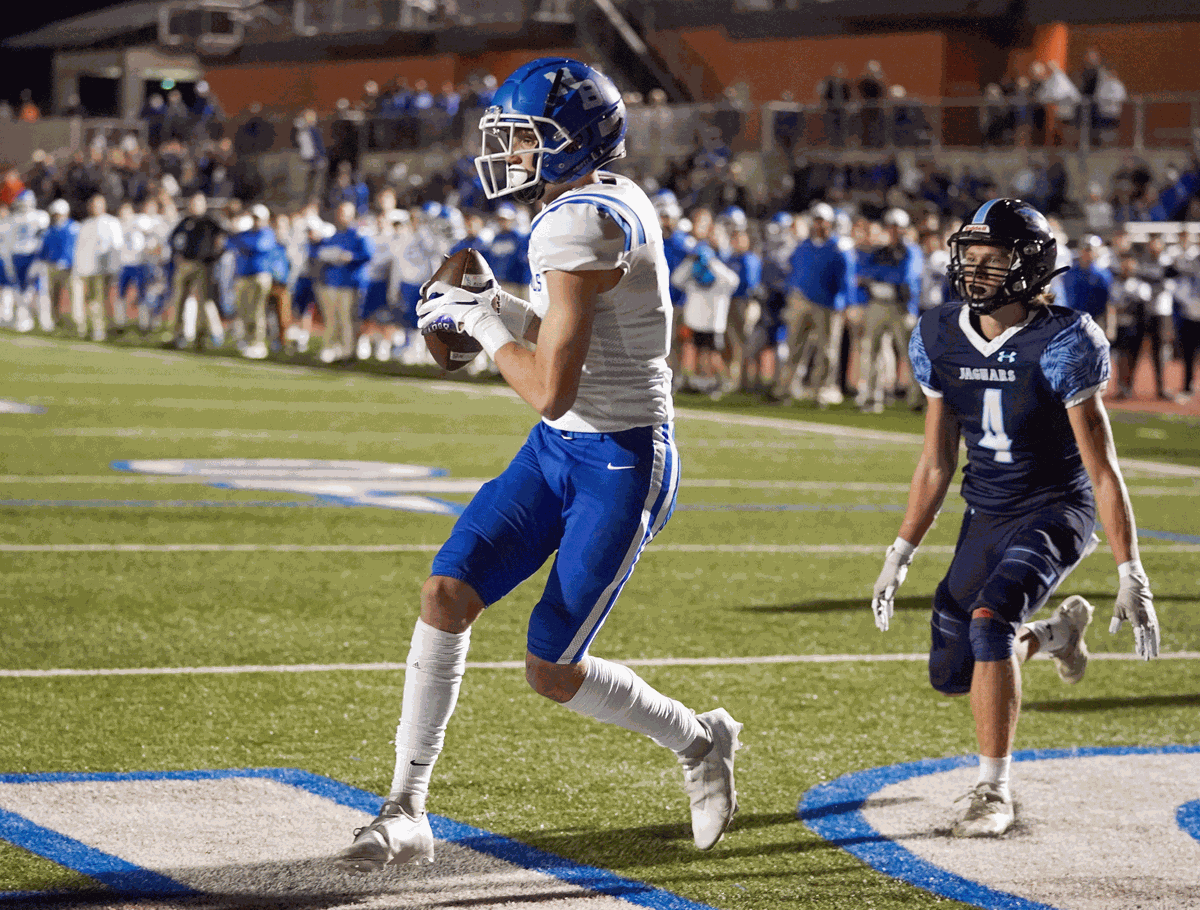 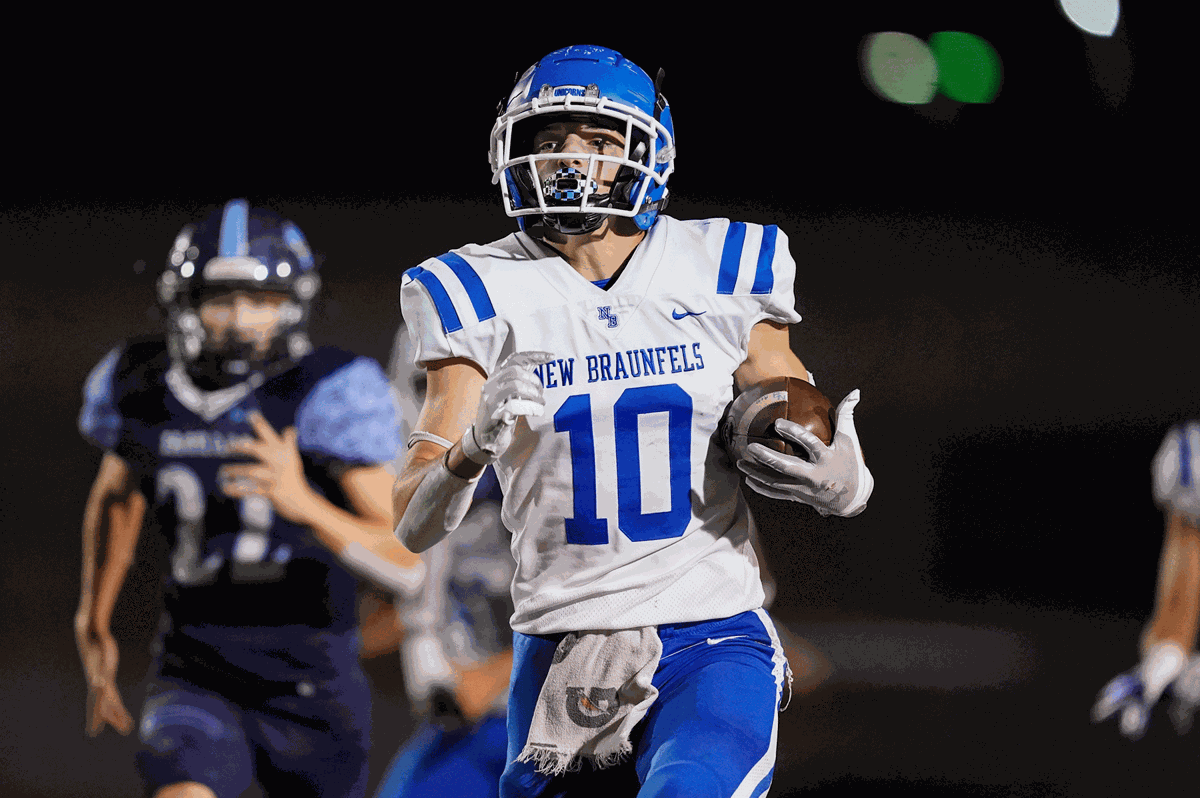 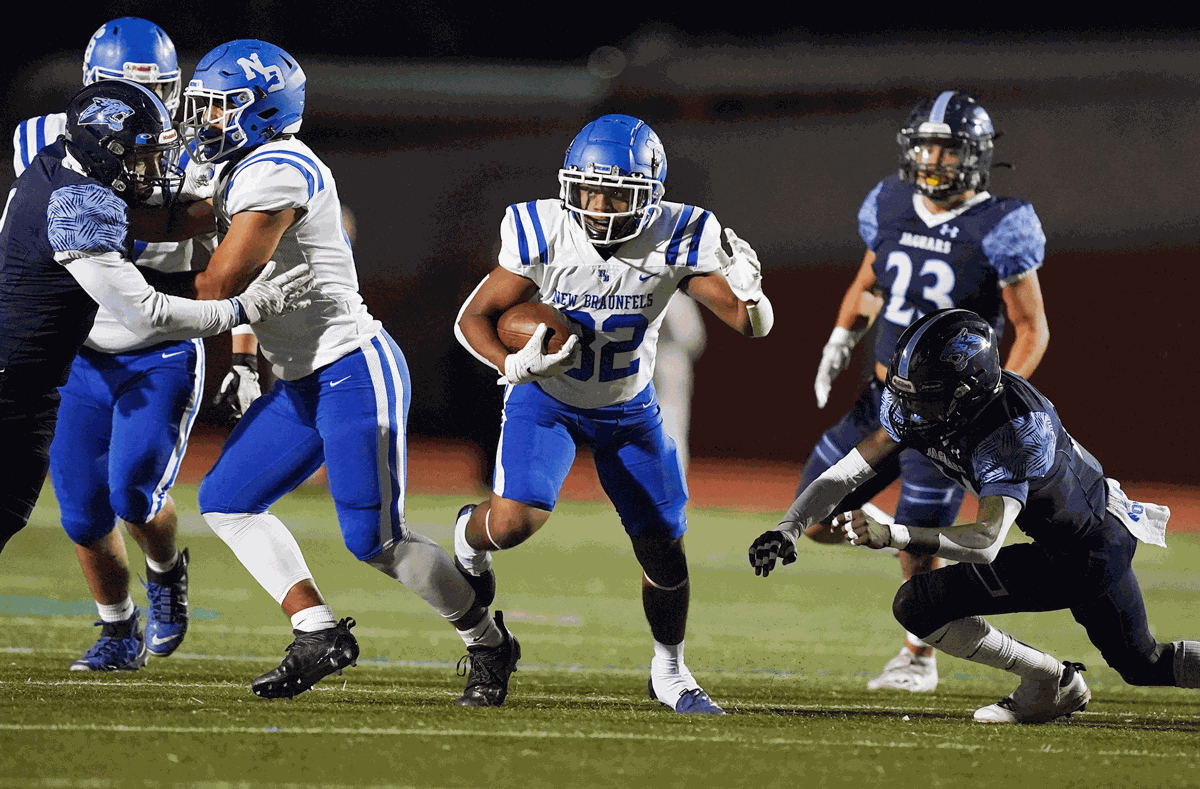 The Unicorns' Tyree Johnson looks for an open lane while carrying the ball Friday night versus Johnson at Heroes Stadium. 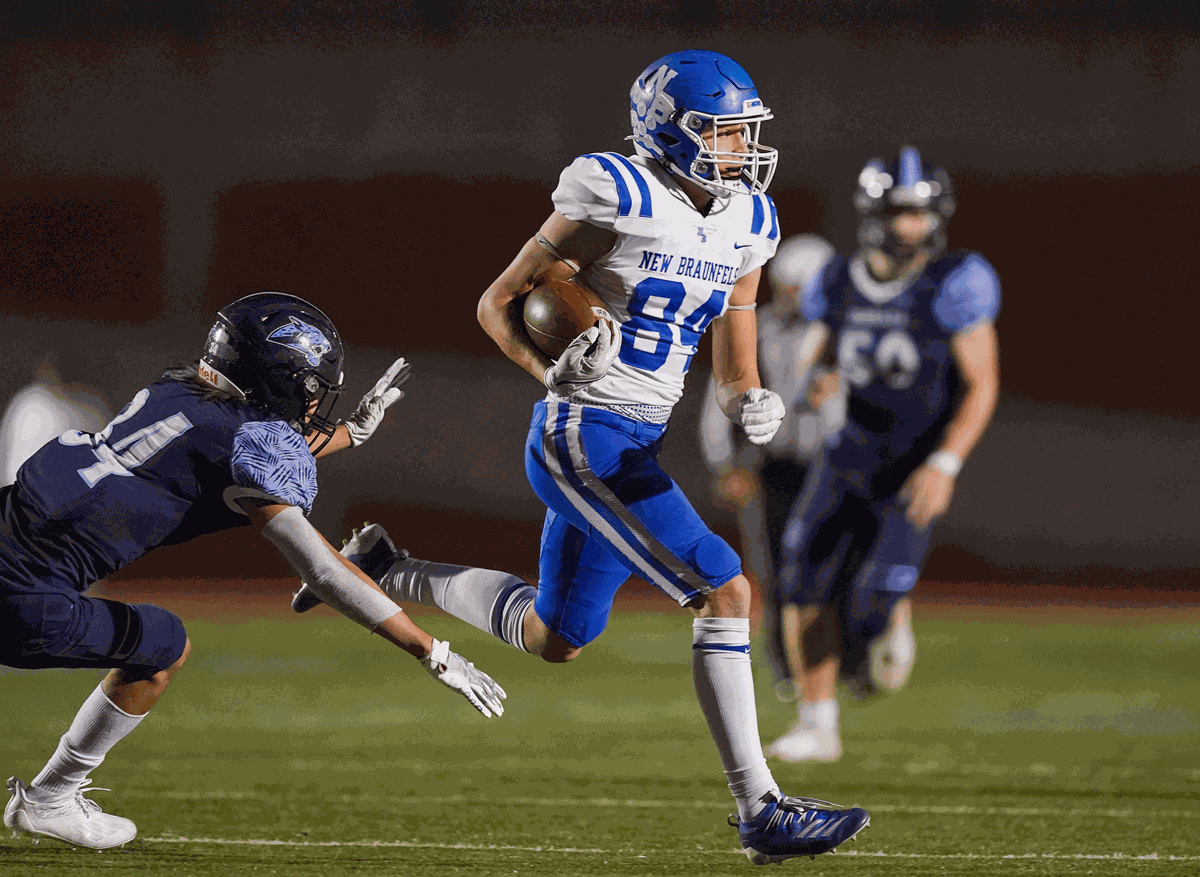 Senior Jake Vaughn tacks on additional yardage after making a catch over the middle against the Johnson secondary on Friday night.

Quarterback Aiden Baumann sprints ahead for yardage during Friday’s win.

The Unicorns' Tyree Johnson looks for an open lane while carrying the ball Friday night versus Johnson at Heroes Stadium.

Senior Jake Vaughn tacks on additional yardage after making a catch over the middle against the Johnson secondary on Friday night.

SAN ANTONIO — They’ll be partying like it’s 2009 this weekend at Wurstfest.

New Braunfels (9-2) broke through for its first playoff win in a dozen years Friday night against previously-unbeaten San Antonio Johnson after surviving a late charge from the Jaguars (10-1) in a wild Class 6A Division II bi-district contest at Heroes Stadium.

The Unicorns’ defense stood tall at its own 10-yard line with a crucial stand that came with less than 30 seconds to play. Four straight incomplete passes sealed the deal for New Braunfels and gave head coach Glenn Mangold’s program its first postseason win at the 6A level.

“For a few years you get close, but nobody cares about being close,” Mangold said. “Then you finally make the leap and get back into the playoffs, and now we’ve got a bi-district championship to show for it. It feels really good, and great for our kids and our program and our whole administration that supports us tremendously.”

The game turned into an offensive showcase in the second half after the Unicorns built a 34-20 lead at intermission. New Braunfels stormed down the field for another score on the opening possession of the third quarter to match its largest lead at 41-20 after Lance Beeghley hauled in a 21-yard pass from Aiden Baumann.

Johnson capped a lengthy drive with a 1-yard touchdown run from Ben McCreary, and after the Unicorns responded with a 26-yard field goal by Kade Wenzel, the Jaguars pulled closer at 44-34 following a 47-yard TD strike from Cruz Kirwan to Ty Hawkins.

Back came New Braunfels, which saw Ryker Purdy bulldoze his way into the end zone for a 6-yard run. The senior’s fourth score of the game gave the Unicorns a 51-34 edge with 7:31 remaining.

The Jaguars cashed in with back-to-back scoring drives that were sandwiched around a rare defensive stop. Johnson dialed up a reverse throwback pass that resulted in a 41-yard scoring toss from Kirwan to Canaan Fairley and later saw Harrison Stone boot a 30-yard field goal to pull his team within six points.

New Braunfels took over with 2:17 to go after Beeghley recovered an onside kick, but a penalty pushed the ball back to the Unicorns’ 33. A quick three-and-out gave the Jags one final chance to complete a miraculous fourth-quarter rally, but Johnson was ultimately denied 10 yards shy of the goal line.

“We knew they had a powerful offense, and in the playoffs you just think about getting stops,” Mangold said. “We got a stop at the very end and were able to seal the win.”

New Braunfels’ offense was equal parts efficient and explosive during its 2021 postseason opener. Baumann picked apart the Jaguars’ secondary in the first half, while Purdy found plenty of running room between the tackles.

However, it was Tyree Johnson that gave the Unicorns their first jolt, as he answered an early Johnson field goal with a 93-yard kickoff return for a TD.

New Braunfels’ defense added a takeaway when Kaden Baerwald poked the ball away from Hawkins and D’Andre Davis made the recovery at Johnson’s 29-yard line. Six plays later, Baumann fired a strike to Beeghley for a 3-yard score as the Unicorns took a 13-3 lead following a missed PAT.

A sack by Andrew Robinson led to a Jaguar three-and-out on Johnson’s ensuing drive, and New Braunfels needed just three snaps to find the end zone again. Following a 51-yard catch by Landon Marsh, Purdy tacked on a 2-yard TD plunge to give the Unicorns a 20-3 lead.

Another short field goal from the Jaguars capped a marathon first quarter, but it was more of the same from New Braunfels’ offense in the second period.

Purdy capped a seven-play, 67-yard march with a 6-yard TD run early in the quarter as the Unicorns vaulted ahead 27-6.

McCreary answered with a breakaway 45-yard scoring run, but Purdy was back in the end zone several minutes later following an 11-play, 75-yard drive. The Jaguars tacked on a late score on a 13-yard TD toss from Kirwan to Alex Tavarez to pull within 34-20 at the half.

Purdy finished the night with 137 yards and four TDs on 23 carries, while Baumann was 18 of 26 passing for 249 yards and two scores. Jake Vaughn made four catches for 68 yards and Landon Marsh posted three grabs for 70 yards, while Beeghley turned in three receptions for 49 yards and a pair of scores.

“Both teams played to the bitter end,” Mangold said. “It was a heck of a high school game.”

The Unicorns face Westlake (11-0) in the area round.