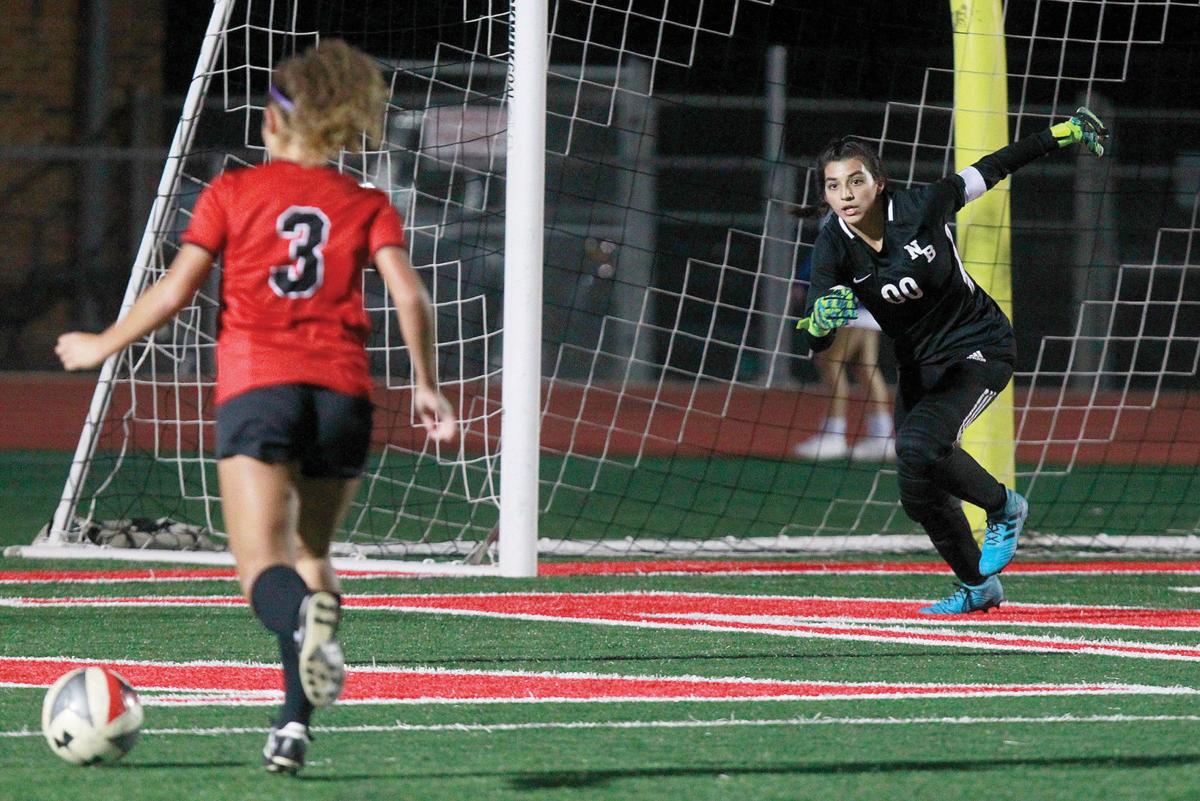 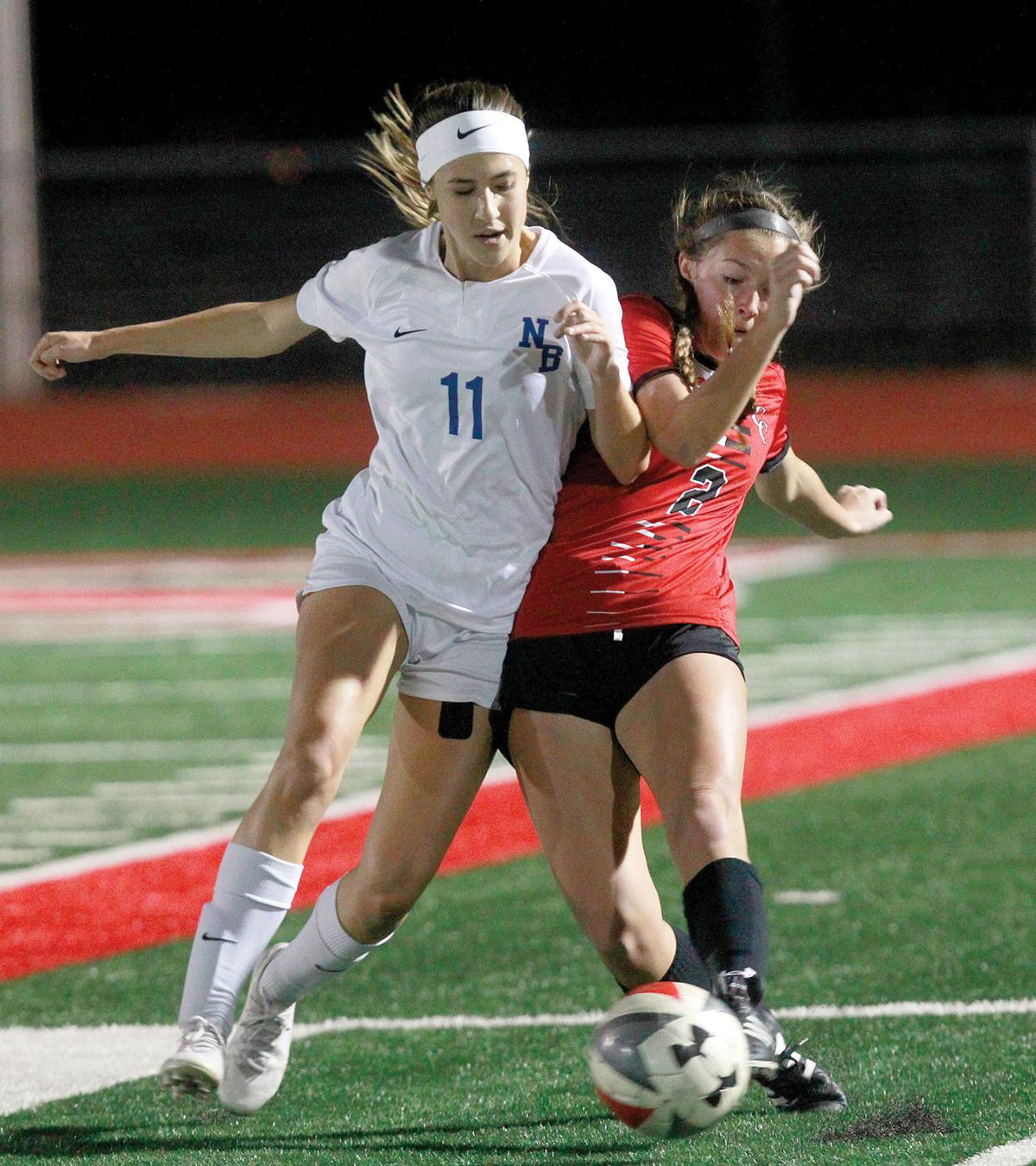 The Lady Unicorns’ Hannon Joseph and the Cougarettes’ Rhyan Hopper fight for possession.

The Lady Unicorns’ Hannon Joseph and the Cougarettes’ Rhyan Hopper fight for possession.

A good goalkeeper can make finding the back of the net quite a chore.

A great goalkeeper can actually make it seem as though the net itself is shrinking with each unsuccessful shot.

New Braunfels senior Meli Garza looked like the latter during Friday night’s rivalry matchup with Canyon, as she recorded 14 total saves — many of them highlight-reel caliber — to help the Lady Unicorns salvage a 1-1 tie in the District 26-6A opener for both clubs.

Garza turned aside multiple golden opportunities for the Cougarettes during the first half and then saw her defense being to take control after halftime. In the end, though, neither team was able to net a game-winner in the waning moments.

“We came out really slow and that’s something that we really haven’t shown all season,” New Braunfels head coach Eric Norris said. “We kind of got away from our style of soccer, but in the second half, the girls came out and played. It was a typical Canyon-New Braunfels rivalry. Everybody put it out there.”

The Lady Unicorns (5-3-1, 0-0-1) withstood a quick flurry from Canyon to begin the game and struck instantly with a counterattack to seize a 1-0 advantage. Caitlyn Hernandez supplied a cross to Hannon Joseph, who gained possession in front of the face of the goal, turned and slammed home her shot to put New Braunfels on top.

“We knew we had speed on the sides and we tried to feed those two,” Norris said. “(Caitlyn) and Hannon play so well together.”

It took less than three minutes for the Cougarettes to equalize. Canyon’s Bianca Ruiz got the ball in space on the left side of the goal and fired a shot toward the far right post that beat a diving attempt from Garza to knot the score at 1-1.

The Cougarettes appeared destined for a 2-1 lead in the next 27 minutes as they continued to pepper the Lady Unicorns’ goal with quality shots thanks to their relentless pressure.

However, Garza rose to the occasion and turned aside every Canyon chance. Not only did she make all the routine plays, but she also smothered the ball several times on missile-like shots from close range.

No save was better than Garza’s diving grab that absolutely robbed Ruiz of a potential go-ahead tally in the 30th minute. The shot came from the same area as Ruiz’s first goal, but this time Garza was prepared for it.

“I know that some of these girls have speed and are going to take that extra touch to the outside,” Garza said. “Therefore, I can’t fall to the ground automatically. I have to stay with them and stay up as much as I can.”

Canyon keeper Elisa Llamas made a nice stop of her own late in the first half to keep Hernandez from burying a buzzer-beating attempt from long distance.

The Cougarettes, who manufactured a ton of scoring opportunities in the first half, were limited in the final 40 minutes despite seeing Serena Ruiz and Hayden Ritch each get good looks at the goal. Canyon head coach Dustin Gold said he and his team spoke about capitalizing on those chances following the contest.

“Improving on the attack is something you’re always going to work on during the season,” Gold said. “(Garza) had a great game and the credit has to go to her. We’ve got to figure out how to get that second goal and that third goal to try and get some separation.”

The Cougarettes will look to bounce back in time for Tuesday’s road match at Smithson Valley, while New Braunfels returns home to host East Central. Both matches are set to begin at 7:15 p.m.