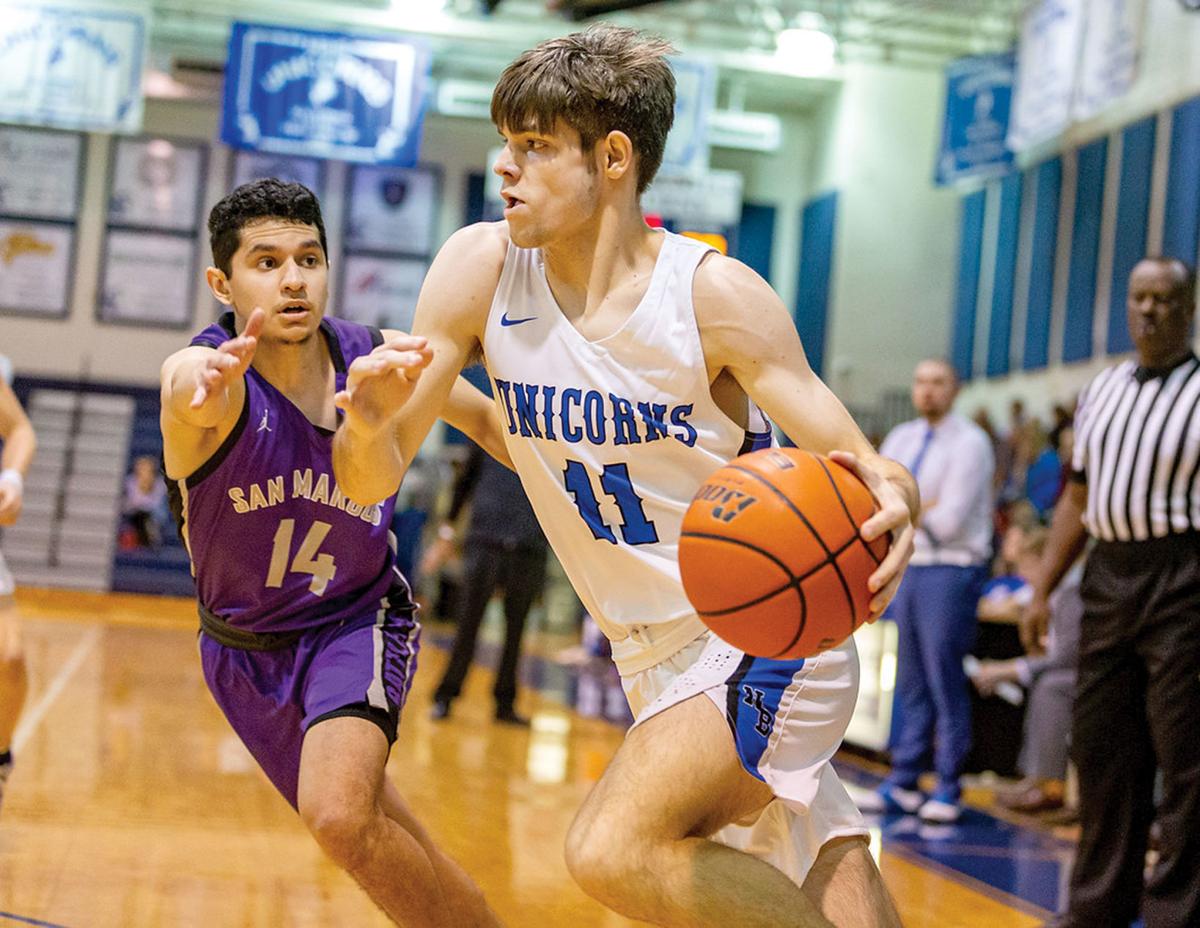 New Braunfels junior Jackson Reid drives to the rim for a layup attempt Friday night at home against San Marcos in District 26-6A play. 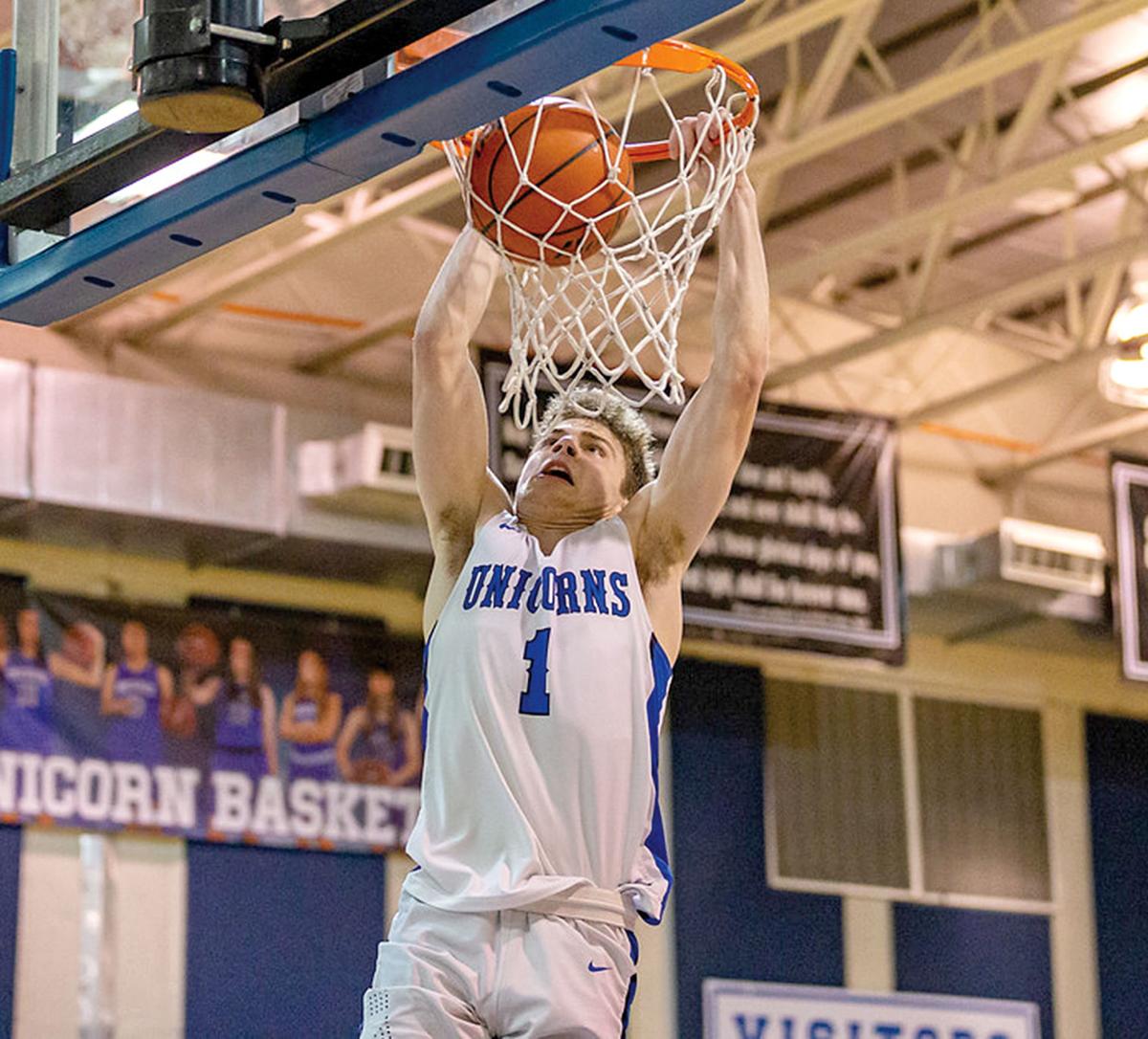 New Braunfels junior Jackson Reid drives to the rim for a layup attempt Friday night at home against San Marcos in District 26-6A play.

With a full month left to play in the regular season, Friday night’s District 26-6A matchup with San Marcos couldn’t fairly be categorized as a must-win contest for the Unicorns.

Behind a barrage of 3-pointers and a third-quarter explosion from Jackson Reid, New Braunfels accelerated past the Rattlers 70-51 at home to improve to 19-7 overall and 2-3 in district play. Reid scored 15 of his 19 points during the third quarter to fuel a 32-point explosion that helped the Unicorns snap out of their first-half funk.

New Braunfels trailed 29-22 at intermission, but Reid said all it took was seeing a few shots fall to ignite he and his teammates on the offensive end of the floor.

“The intensity picked up, obviously hitting shots helps,” the junior said. “In the first half, we shot the ball poorly, so knocking down shots, your confidence gets back up there and you feel better about how you’re playing.

“Sometimes going to the rim is all you need to go and shoot 28-footers.”

The Unicorns emerged from the locker room determined to find their rhythm, and back-to-back layups by Mason Pullen and Reid pulled New Braunfels within three at 29-26.

San Marcos (14-11, 2-3) put in two quick baskets to increase its lead back to seven, but Reid and Pullen had already shaken off the cobwebs and quickly connected on consecutive shots from beyond the arc. Reid added a free throw before Jack Lewis snatched an offensive rebound and muscled up a putback to bring the Unicorns within one.

Reid pulled up and drained another 3 on the next trip down the court to give New Braunfels a 38-36 lead that it never relinquished. Reid added two more 3-pointers in the period, while Pullen, Dylan Schmitt and Eli Datesman tallied 10 additional points before the buzzer sounded.

The Unicorns entered the fourth quarter with a 54-41 edge, but San Marcos used a 7-0 run to get right back into contention. From there, though, New Braunfels began to lock down the glass on both ends, which led to multiple one-and-done possessions for the visiting Rattlers.

“If you can limit them to one shot where they can’t the get the ball back, they’re going to struggle,” Reid said.

Pullen snapped San Marcos’ run with a floater along the baseline that was the result of a beautiful pass from Grant Jacobs. Sam Rankin then used a soft touch in the lane to push the Unicorns’ lead back to double digits.

With the Rattlers’ offense sputtering, Datesman provided four free throws to extend the advantage before Pullen scored each of the final six points for New Braunfels. In a flashback to two weeks ago against Canyon, the senior guard elevated for a powerful dunk to cap off another crucial 26-6A triumph in style.

“Every district win is important,” Reid said. “This is probably the best group we’ve had in a long time, so we’re just enjoying it.”

Pullen finished with a game-high 22 points and Datesman tallied 14 to go along with Reid’s 19. Schmitt notched nine after hitting three 3-pointers on the night.