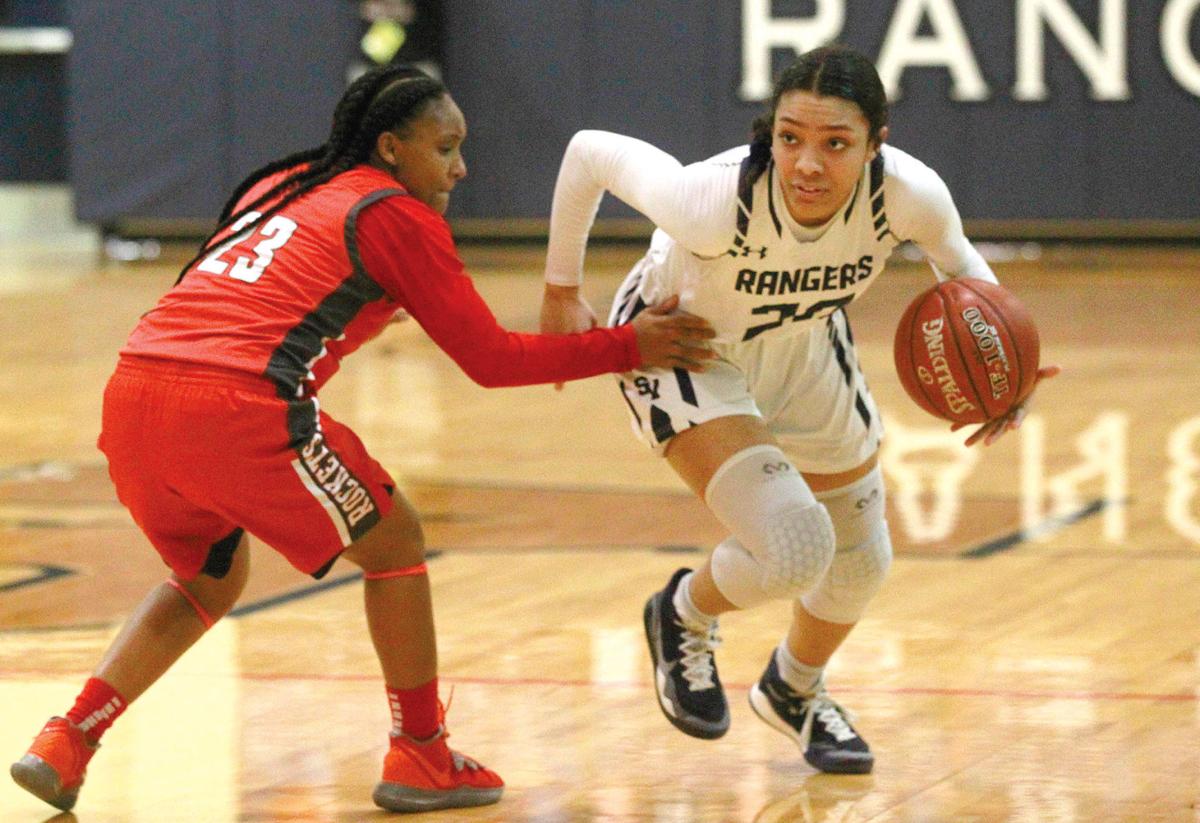 Smithson Valley’s Anika McGarity looks to drive toward the rim Tuesday night while being guarded by Judson’s Chriresha King. 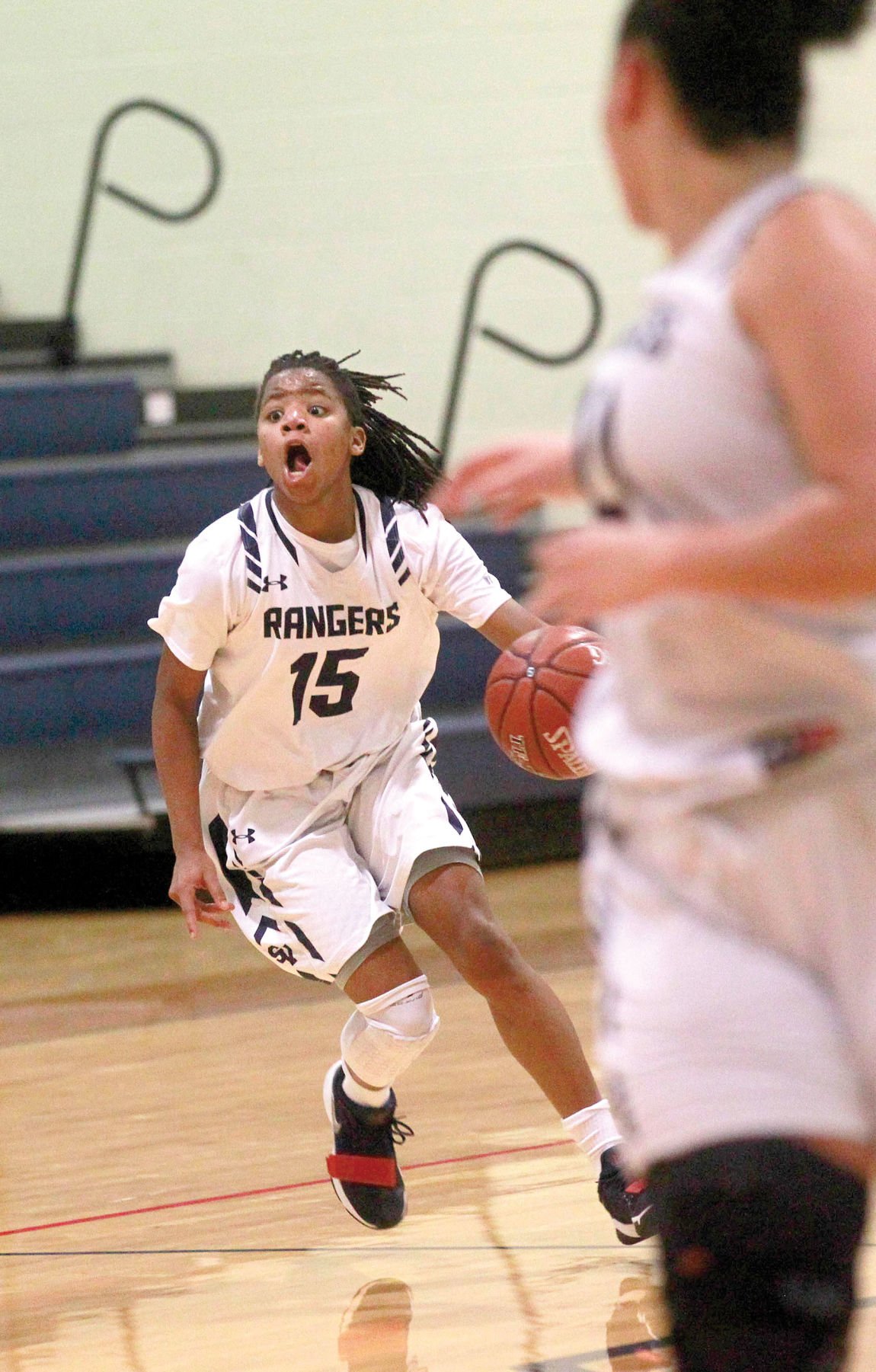 Point guard Trinity Garrett sets her sights on the lane during a possession Tuesday at SVHS.

Smithson Valley’s Anika McGarity looks to drive toward the rim Tuesday night while being guarded by Judson’s Chriresha King.

Point guard Trinity Garrett sets her sights on the lane during a possession Tuesday at SVHS.

SPRING BRANCH — Just when it appeared the Lady Rangers were finally about to pull even with Judson on Tuesday night, the visiting Lady Rockets found a little extra fuel in their tank.

Following a rough start, Smithson Valley faced an uphill climb for most of the game, but the Lady Rangers rallied to within a single bucket on two separate occasions and within four twice late in the contest.

However, each time Judson — the defending Class 6A state champion — answered with a quick run of its own to pull away once more. The Lady Rockets (20-8, 5-1) escaped with a 57-49 district win after Kierra Sanderlin connected on four free throws down the stretch.

“We had seven turnovers in our first seven possessions of the game and we ended the game with 31 turnovers,” Smithson Valley coach Matthew Sutherland said. “You’re not going to beat a team like Judson if you have 31 turnovers, no matter how well you play in between that. They’re well coached, have great players and you just can’t have that many. You’ve got to be stronger with the ball.”

Smithson Valley (21-5, 5-1) recovered from its early lull and ended the first period down by just four at 12-8. Judson later used a quick run to build an 18-11 edge, but the Lady Rangers countered with six straight points from Gabby Elliott, Brianna Grell and Trinity Garrett.

The run also featured timely steals from Anika McGarity, as well as blocked shots and solid rebounding in the interior by Elliott and Tanyse Moehrig.

The Lady Rockets scored the final five points of the half to grab a 24-17 advantage at the half, although it didn’t deter Smithson Valley’s comeback bid. McGarity opened the third quarter with a personal 5-0 run after knocking down a corner 3 and going coast-to-coast for a layup after notching a steal in the open court.

Judson again answered the surge with a flurry of buckets, which were provided by Sanderlin, Chriresha King, Ariana Rodriguez and Amira Mabry. The visitors took a 40-31 lead into the final stanza, but Garrett led one final charge for the Lady Rangers.

The junior point guard dazzled the home crowd with an acrobatic layup that resulted in a three-point play, and following two successful free throws, Garrett posted a driving lay-in that pulled Smithson Valley to within four at 45-41.

The Lady Rangers had an opportunity to tie the game, but two misses from the foul line and a layup that went awry ultimately allowed Judson to go back up by eight. A short look in the paint for Mabry and a steal and lay-in by Sanderlin capped perhaps the game’s biggest turning point.

“I thought our second half was obviously a lot better,” Sutherland said. “Anika had some big shots, Trinity did as well. A lot of people played better in that second half — well enough to win. Unfortunately, every time we made a run they were able to bounce back and make one of their own.”

True to form, Smithson Valley came right back with four quick points, as McGarity tallied a basket inside and Garrett converted a spinning bucket in the lane. From there, time began to run out, and one last Judson layup and defensive stop all but cemented the victory.

Sutherland said his team has a few adjustments to make going forward, especially against the top opponents in District 26-6A.

“For one, we’ve got to come out ready to compete from the jump,” the coach said. “We can’t have the nerves. Naturally, you’re going to be nervous for these games, but you’ve got to put that behind you and be ready to go.”

The Lady Rangers won’t have any time to relax prior to their next big test in 26-6A. Smithson Valley is scheduled to travel to Cibolo this Friday night to take on district co-leader Steele (19-7, 5-1) at 7 p.m.