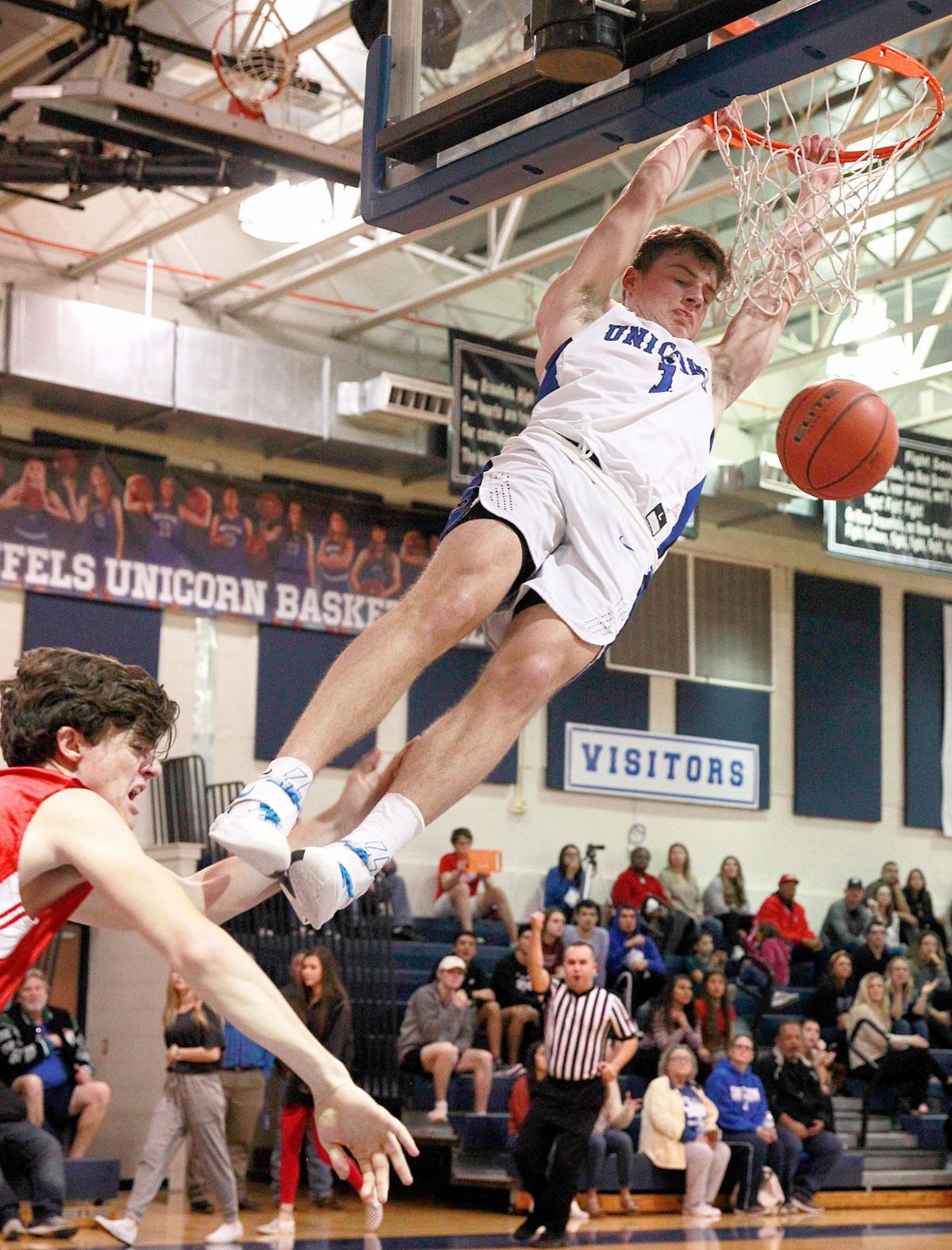 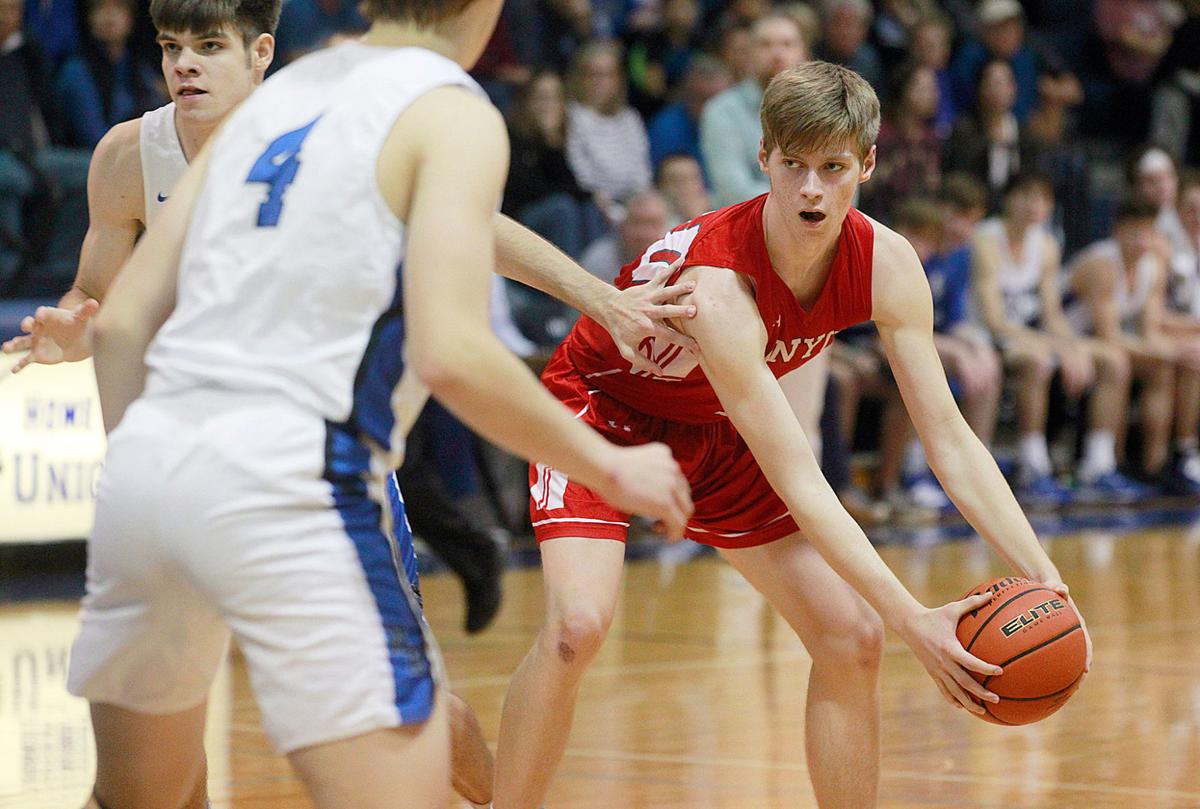 A 20-0 run that spanned portions of the third and fourth quarters ignited New Braunfels Friday night during a 52-38 victory against Canyon in the District 26-6A opener for both teams.

The Unicorns (19-4, 1-0) spent much of the first half playing at the Cougars’ pace, which allowed Canyon to vault ahead by one at the half after Josh Malone converted a reverse layup to beat the buzzer. New Braunfels was finally able to stretch its legs a little in the second half thanks to some lockdown defense and a dominant effort on the boards.

“For whatever reason, in the first half we just didn’t have it,” Unicorns head coach David Brawner said. “We weren’t playing with a lot of intensity on defense. In the third quarter, we had it.”

The Cougars (7-12, 0-1) took a 29-26 lead when Paul Wood drained a 3-pointer early in the third, but Canyon soon went cold and was limited to one shot per possession as New Braunfels began collecting every rebound.

The Unicorns’ surge began with a 3 from Eli Datesman, who then added a pair of free throws to give his team the lead back. Point guard Zach Gomez-Villanueva came off the bench and provided instant energy, as he flipped in a shot before pulling up for a 3 moments later in transition.

Gomez-Villanueva then swiped the ball and found Jackson Reid for a wide open layup that extended New Braunfels’ lead to 39-29 heading into the final stanza.

“Big time spark,” Brawner said of Gomez-Villanueva’s impact. “He’s grown up a lot for a young kid and he did a lot of really good things today.”

As Canyon’s icy shooting continued, Mason Pullen, who finished with a game-high 24 points, tallied the first six points of the fourth quarter to add to the Cougars’ misery. Wood knocked down a trey with 2:33 left to end the drought, but Pullen added an exclamation point a few possessions later when he slammed home a two-handed dunk while also absorbing a foul.

The play sent the Unicorns’ student section into hysterics and capped New Braunfels’ strong second half.

“That was just icing on the cake,” Pullen said of the dunk. “We had to play our game and push the tempo because they wanted to slow the ball down and that’s not our game, so we wanted to push the ball and put points on the board.”

Canyon showed no shortage of confidence in the early going, as Malone, Hunter Teeler and Seth McCarty all provided key buckets. The Cougars were forced into taking multiple mid-range and long distance jumpers in the second half, though, and Canyon was simply unable to connect on enough to stay within striking distance.

“When that happens in close games, it can lead to big runs,” Canyon head coach Paul Buntyn said. “Our kids played so hard and played defense aggressively, but you’ve got to put points on the board.”

Pullen tallied 11 of his team’s 23 points in the first half and showcased his ability to get to the rim and finish in traffic. Brawner said the senior continues to improve as a scorer.

“He’s becoming a really, really good offensive basketball player,” Brawner said. “He’s learning to see what the defense is going to give him and how they’re going to play him.”

Datesman added 10 points in the win, while Reid and Gomez-Villanueva posted five apiece.

The Cougars were led by Wood’s 11 points and Malone’s 10. Buntyn said his team will need to continue to be patient on offense in order to manufacture open looks every trip down the floor.

“We’re very much an all-in together group, so we’re not looking for one person to do it,” Buntyn said. “We’re looking for us to have a great offensive possession every possession. When we had four or five bad possessions in a row, that’s when we got in trouble. We’ve got a lot of guys who are capable of making shots and creating shots, so now it’s just a matter of us consistently giving up our OK shots for great shots.”