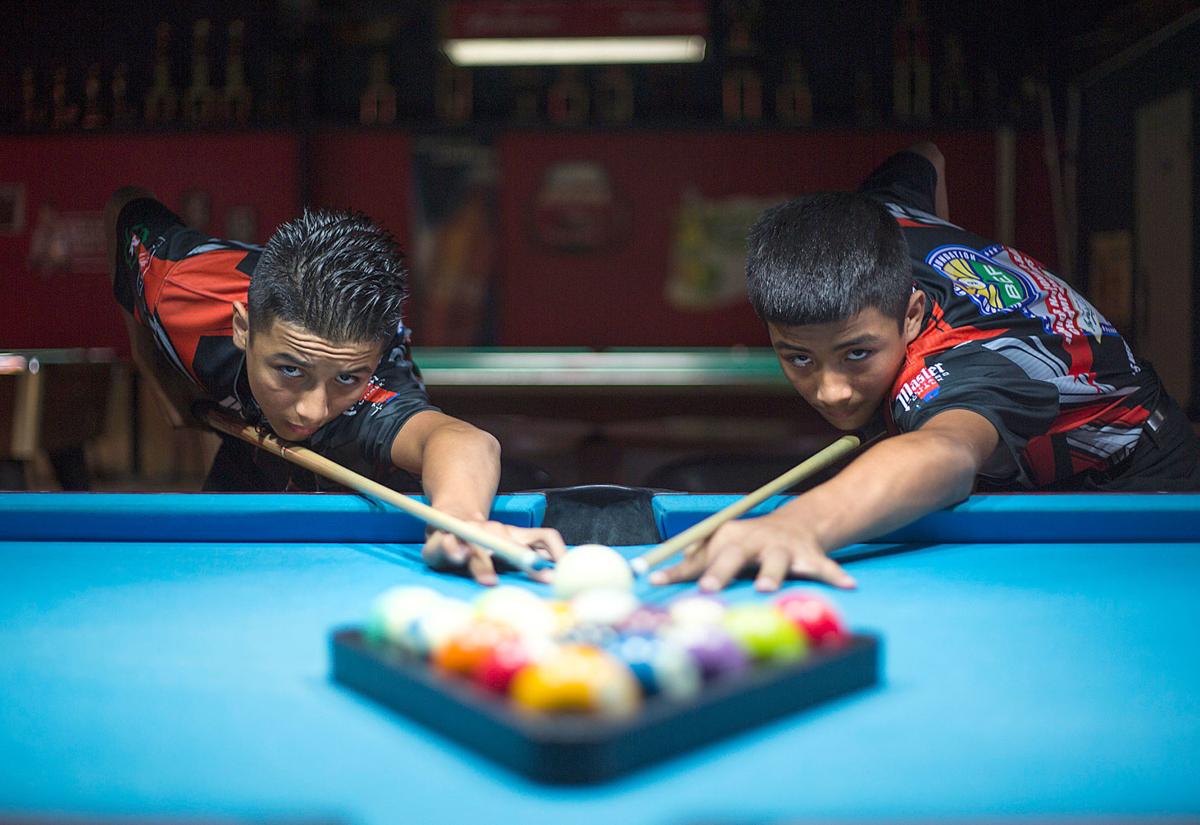 New Braunfels residents and brothers Lazaro Martinez III (left) and Gabriel Martinez have made a name for themselves both locally and on the national billiards circuit. Lazaro III recently earned a berth in the 9-ball world championships in Greece. 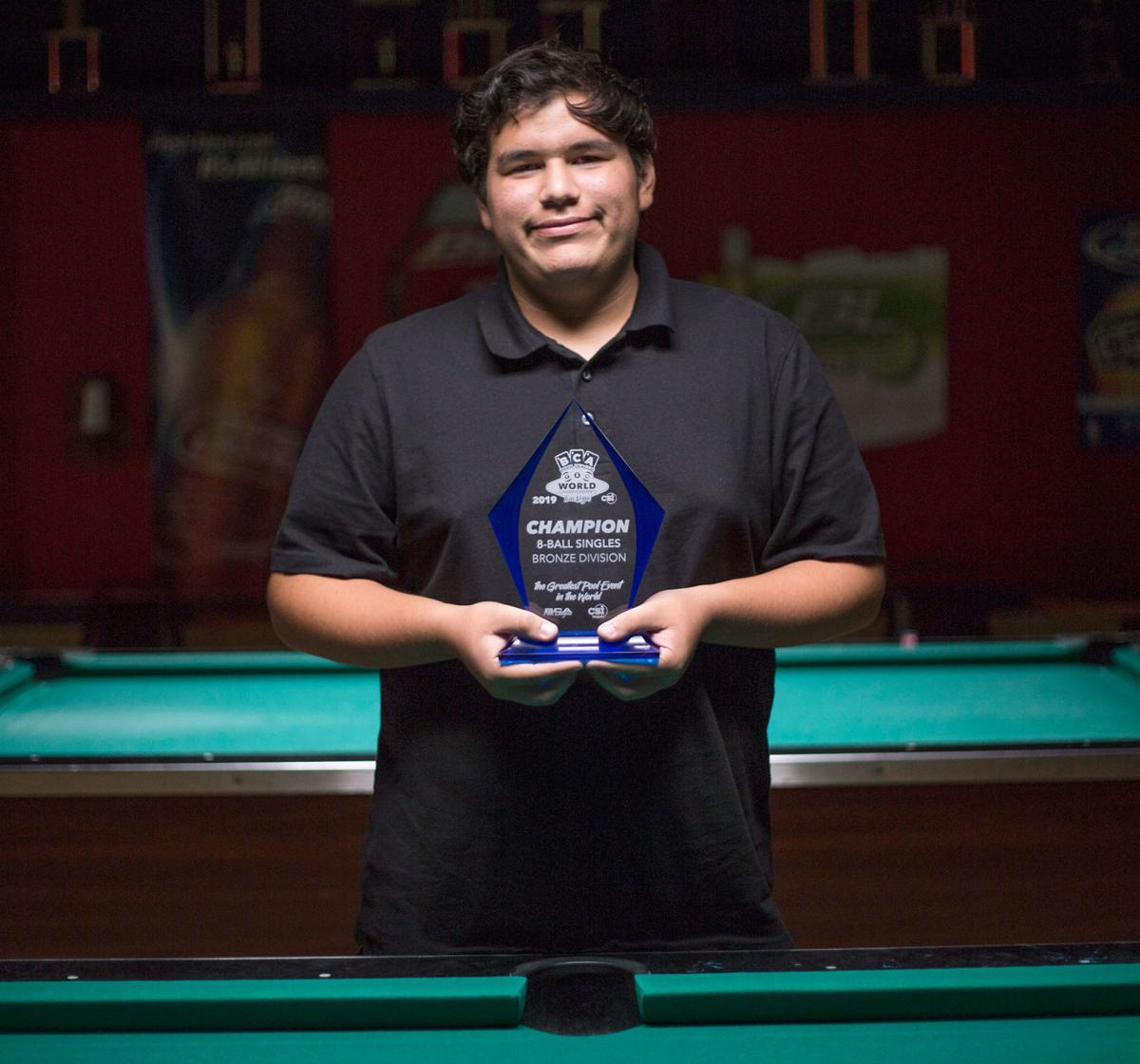 Jaden Acuna poses with his first-place trophy from the BCA Mixed 8-Ball Singles event in July. It was Acuna’s first time competing in a major tournament. 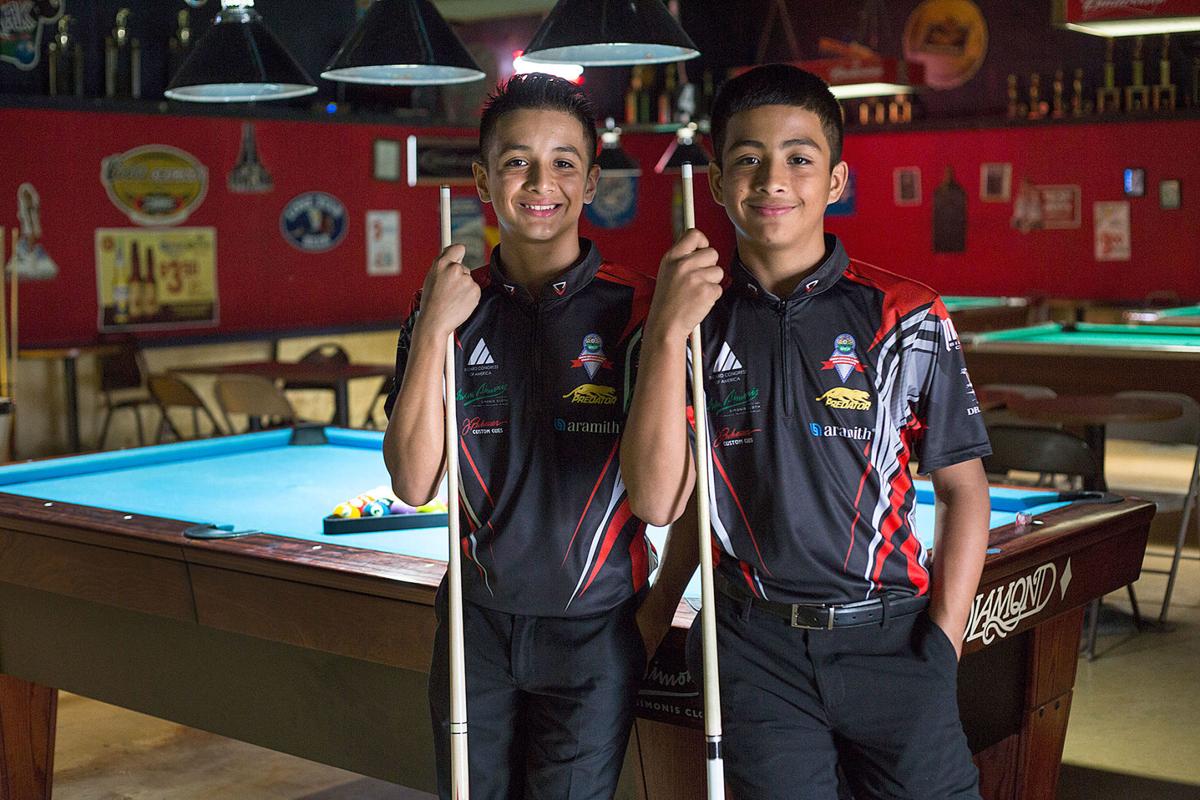 Lazaro Martinez III (left), 13, and his brother Gabriel, 12, can often be found competing and practicing at Bob’s Billiards in New Braunfels.

New Braunfels residents and brothers Lazaro Martinez III (left) and Gabriel Martinez have made a name for themselves both locally and on the national billiards circuit. Lazaro III recently earned a berth in the 9-ball world championships in Greece.

Jaden Acuna poses with his first-place trophy from the BCA Mixed 8-Ball Singles event in July. It was Acuna’s first time competing in a major tournament.

Lazaro Martinez III (left), 13, and his brother Gabriel, 12, can often be found competing and practicing at Bob’s Billiards in New Braunfels.

As billiards fights to be included in the 2024 Olympics, the future of the sport is on display weekly at a local pool hall.

Brothers Lazaro Martinez III, 13, and Gabriel Martinez, 12, of New Braunfels can be found sharpening their skills at Bob’s Billiards alongside another young standout, Jaden Acuna, 15, of San Antonio. The trio has routinely mopped the floor with adults during tournament play, and all three have had success on the big stage already.

Lazaro III, aka “Lil’ Laz,” broke into the world of competitive play in 2015 when he took Las Vegas by storm while winning the Billiard Congress of America (BCA) Junior 9-Ball Challenge at just 9 years old. He added another win in 2017, and this past summer, he returned to Vegas and conquered the field at the Billiards Education Foundation (BEF) Junior National 9-Ball Championships at South Point Resort and Casino while capturing a gold medal in the 14U division.

But that’s just the tip of the iceberg.

Lazaro III has now qualified to compete in the upcoming World Pool-Billiard Association (WPA) Cyclop World Junior 9-Ball Championships in Cypress, Greece and will represent the USA as one of four boys on the 17U squad. It’s the perfect spot for Lazaro III, who has craved a competitive environment since he began to take up the sport as an elementary schooler.

“From the start, I always wanted to play for fun and practice,” Lazaro III said. “Once I stepped into the pool hall and started playing, I was like, ‘Man, I want to do this — I want some competition.’ That’s when I really wanted to play.”

The same can be said for Gabriel Martinez, who plays countless head-to-head matches with his brother as they prepare for tournaments around the area and nationwide. The brothers, who attend Canyon Middle School, are dedicated to improving their all-around skills.

“I win, then he wins, and we go back and forth every time, basically,” Gabriel said. “We try to make an effort and get better every day.”

Prior to his initial trip to Las Vegas, Lazaro III said he knew he was making progress in the sport when he was finally able to beat his dad.

“I actually got my own stick and case and then I beat him,” Lazaro III said. “I was like, ‘Wow, it’s a great feeling.’”

The boys’ father, Lazaro Martinez Jr., has gotten used to seeing his boys collect more victories ever since. He said that from a young age, both showed interest in billiards, which led to him getting Lazaro III and Gabriel involved with the sport.

“They have grown a lot, and it all started off with me entering into the game at an early age, in my 20s,” Martinez Jr. said. “As I progressed myself in my late 20s, they were four and five and I noticed them watching me and being interested in the pool videos I would watch.

“As far as coming out and playing with me, then I got them in the Billiards Education Foundation tournaments for the juniors. I’ve seen them progress and they’re excited to win trophies. It motivates them.”

Martinez Jr. has seen his sons continue to study the game and apply new strategies along the way. He said they both enjoy watching decorated champion Shane Van Boening, who is considered to be one of the best pool players on the planet.

“They try to see how he walks around the table, chalks his cue, steps back out, steps into the box to line his target up — just to keep the feelings and the pressure away,” Martinez Jr. said.

Acuna joined the Martinez brothers during their most recent trip to Nevada and decided to enter the BCA Mixed 8-Ball Singles event in the bronze division. He claimed first place out of 129 participants.

“It felt good for my first time to actually win,” Acuna said. “I try to play everyone the same, no matter if they’re higher or lower than me. I’m going to try to stick to it and see what happens.”

The Martinez family is holding fundraisers prior to Lazaro III’s trip to Greece for the world championships on Nov. 20-24. A benefit tournament and plate sale is scheduled to be held on Oct. 27 at Bob’s Billiards in New Braunfels.

Lazaro III also has a Facebook page — found under Lazaro Martinez 111 — which features a link for monetary donations for those who wish to aid in his journey to Cypress.

[smile] It is wonderful to see young adults involved in this sport and being good at the game. If more kids from New Braunfels got involved in an activity perhaps we would not have students involved in gangs or criminal activity.