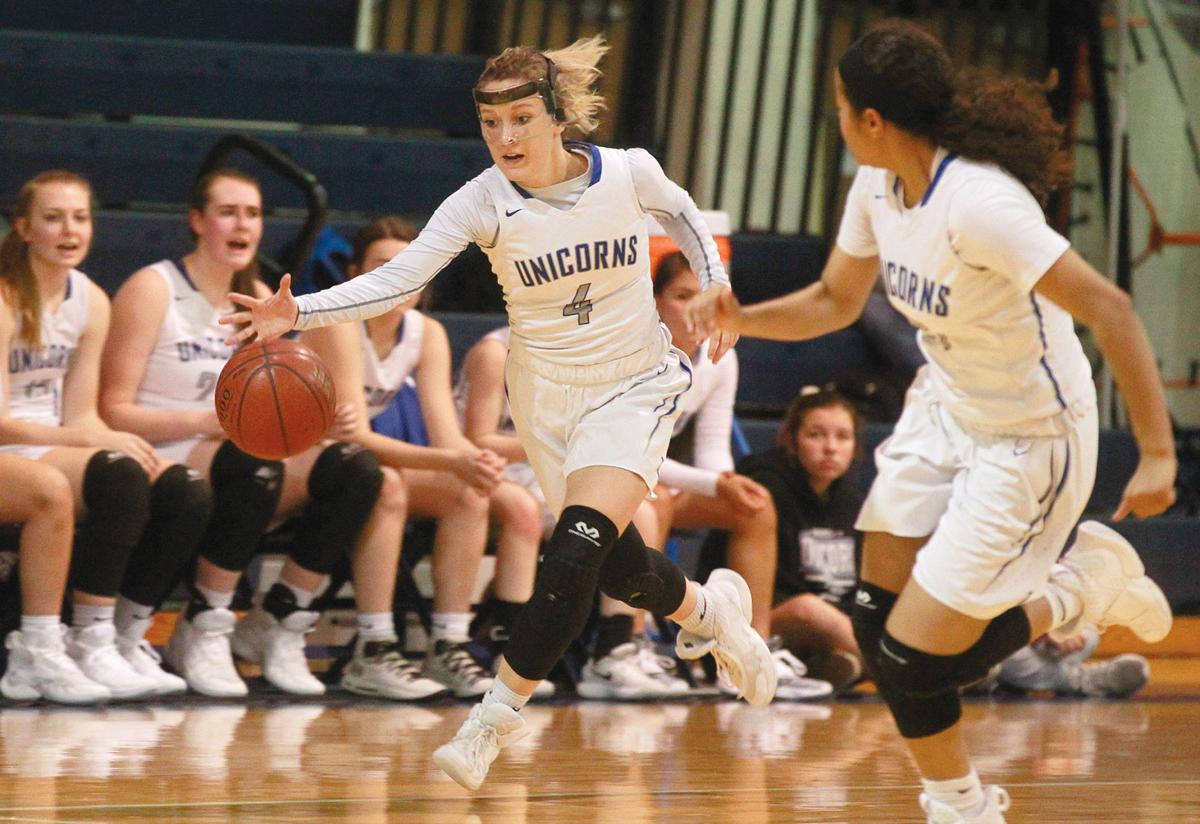 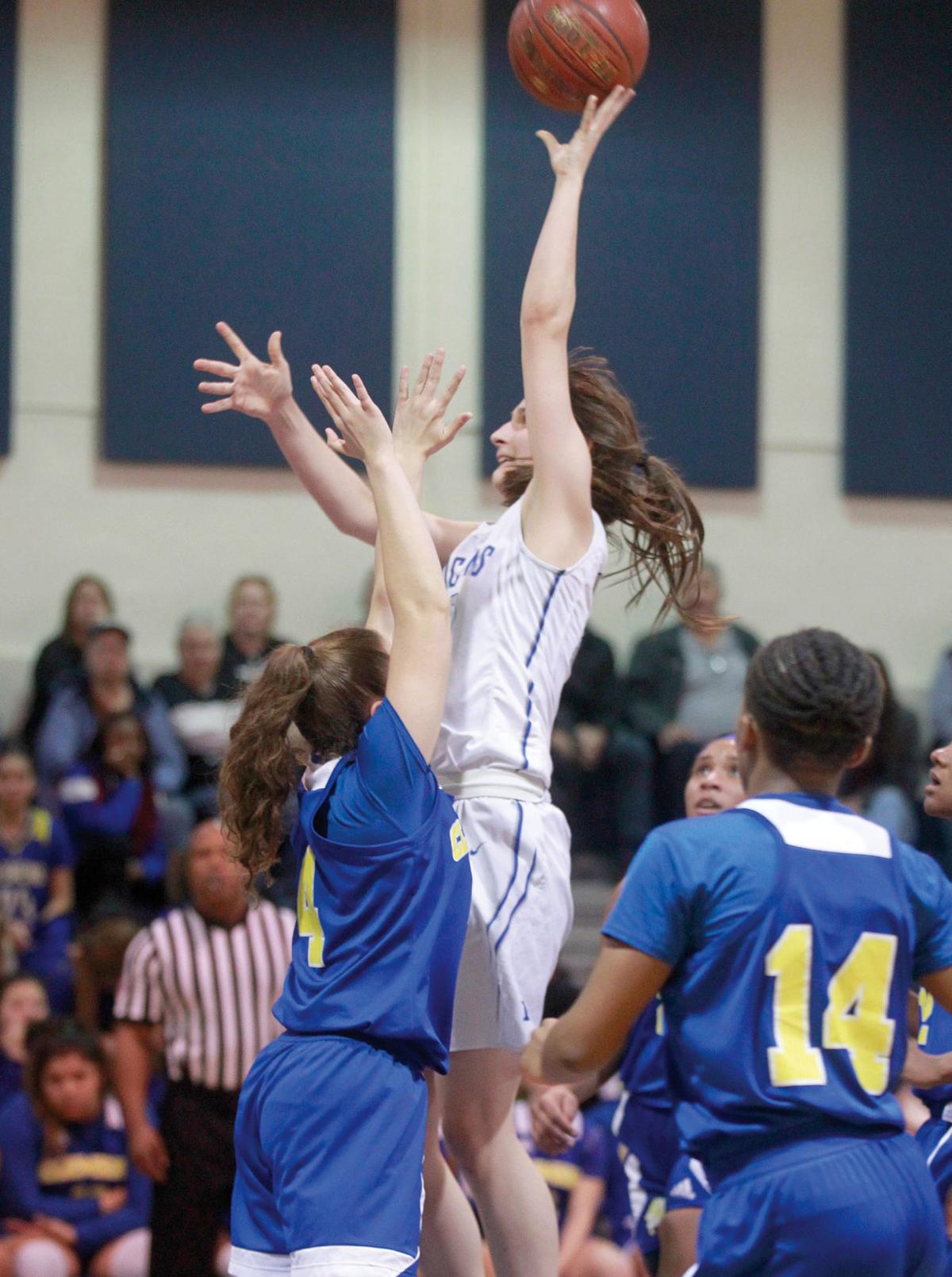 The Lady Unicorns’ Meredith Sherrerd attempts a left-handed runner in the lane on Tuesday night.

The Lady Unicorns’ Meredith Sherrerd attempts a left-handed runner in the lane on Tuesday night.

The Lady Unicorns spent much of Tuesday night’s District 26-6A opener trying to stay within striking distance of Clemens.

Just when it appeared New Braunfels (11-5, 0-1) was finally about to pull even with the Lady Buffs, the visitors used a key run to vault ahead once more. Clemens (16-6, 1-0) then sealed the win from the foul line to head into the Christmas break with a 48-40 triumph.

“It was a rough night,” New Braunfels head coach Jamie Moore said. “I felt like we really dropped the ball on that one. Sometimes you have bad nights and the ball just doesn’t fall for you and you have to make up for it in other areas and we didn’t do that.”

The Lady Unicorns trailed 33-26 heading into the final stanza but got the surge they were looking for thanks to a pair of free throws by Brie Sosa, a jumper from Meredith Sherrerd and a coast-to-coast layup by Kailee Mulkey after she ripped the ball away from a Clemens player.

The run pulled New Braunfels within a single bucket at 35-33, and a steal by Alexis Atkinson gave the Lady Unicorns a chance to tie or take the lead moments later. However, the Lady Buffs’ Alysia Proctor notched a steal of her own and motored the other way for a quick lay-in.

Clemens’ Jayda Postell added another basket before Sherrerd knocked down a long jumper, but back came the Lady Buffs, as Amaya Jackson muscled her way inside for a bucket and a foul. The resulting free throw put Clemens up 42-35 with just over two minutes to go.

Sosa answered with a 3-pointer, but the Lady Unicorns went cold from the field down the stretch. New Braunfels was forced to foul, which allowed the Lady Buffs to seal the win at the charity stripe.

“I felt like Clemens really couldn’t miss and we couldn’t hit anything,” Moore said.

The visitors led 9-8 after the opening quarter despite being turned aside on three separate occasions by Jordyn Hofmann, who held an early block party in the paint.

Clemens’ lead stretched to 20-13 in the second period, but Mulkey banked in a 3-point heave at the buzzer to trim the Lady Unicorns’ deficit to four at the half.

The Lady Buffs twice built a 10-point edge in the third, but New Braunfels refused to go away despite its frigid shooting from the outside. Atkinson provided a few timely steals to help spark the comeback effort, although the rally ultimately fell short.

“It’s a tough loss, but district play is a marathon like we tell the girls. It’s not a sprint. We’ve got to move on from this one and focus on the next one.”

Mulkey delivered a team-high 16 points in the setback, while Sherrerd and Sosa finished with 10 and seven points, respectively.

The Lady Unicorns will look to bounce back on Friday when they travel to Spring Branch to battle Smithson Valley in another 26-6A clash. Tipoff is set for 7 p.m.

CIBOLO — The Cougarettes couldn’t keep up with Steele Tuesday night during the District 26-6A opener for both teams in Cibolo.

Steele won every quarter and built a 27-16 lead at the half. The Cougarettes were held at bay in the second half despite receiving 10 points from Emery Black in the game.

Next up for head coach Zeb Burleson’s team is a 7 p.m. home game Friday night against San Marcos.