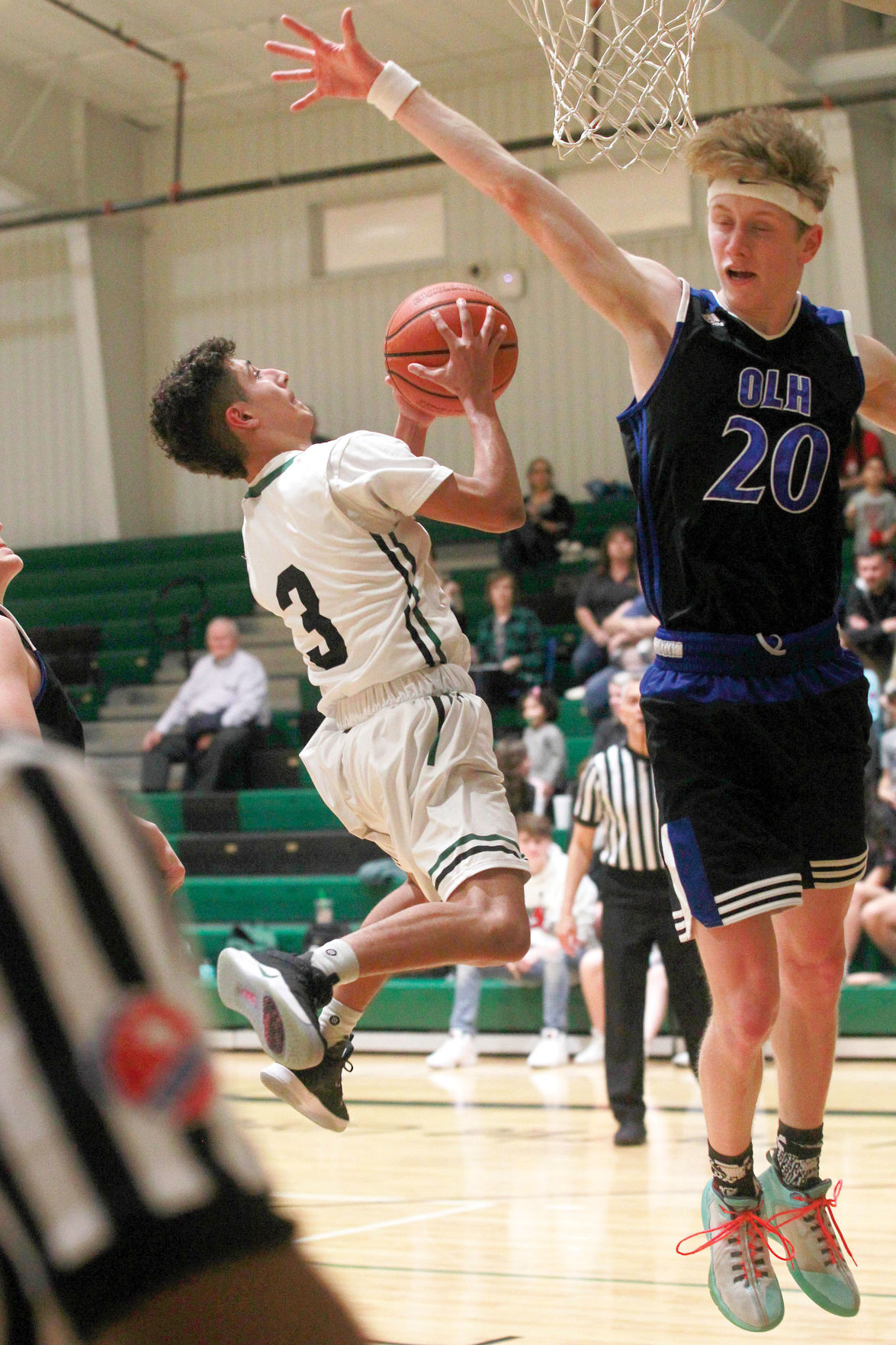 New Braunfels Christian guard Jordan Mesa hangs in the air while attempting a layup Friday night at home against Kerrville Our Lady of the Hills. Mesa tallied a team-high 16 points in the Wildcats’ 56-39 district victory. 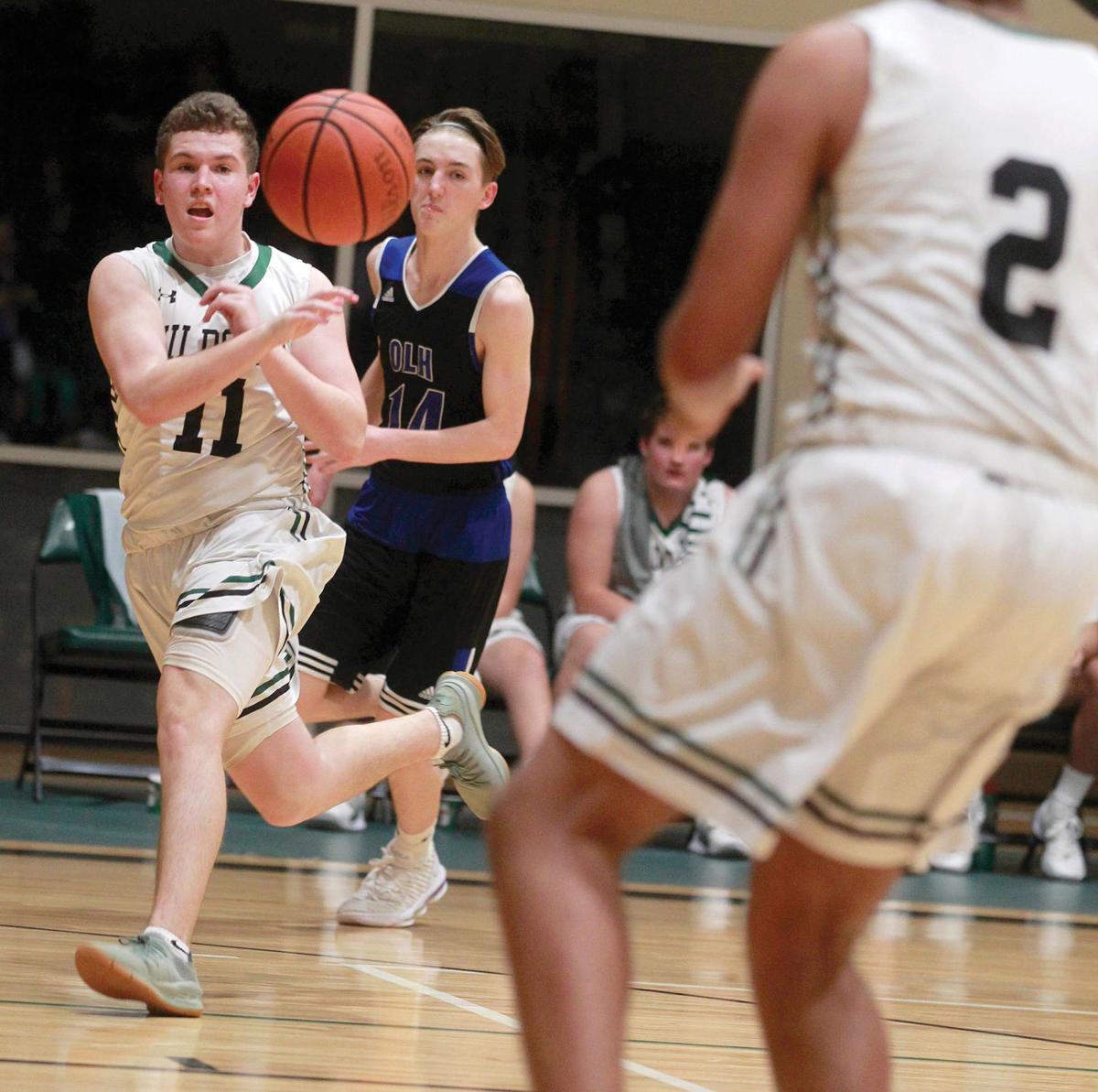 NBCA’s Hunter Holly (11) fires the ball to teammate Elijah Sexton during a fast break Friday night against Kerrville Our Lady of the Hills.

New Braunfels Christian guard Jordan Mesa hangs in the air while attempting a layup Friday night at home against Kerrville Our Lady of the Hills. Mesa tallied a team-high 16 points in the Wildcats’ 56-39 district victory.

NBCA’s Hunter Holly (11) fires the ball to teammate Elijah Sexton during a fast break Friday night against Kerrville Our Lady of the Hills.

The Wildcats made the most of their fast-break opportunities Friday night at home against Kerrville Our Lady of the Hills, but it was on the defensive end of the floor where New Braunfels Christian Academy shined the brightest.

NBCA (16-11, 2-0) switched between 2-3 zone and man-to-man looks while the Hawks struggled mightily from long distance. The Wildcats led for the majority of the contest and cemented the 56-39 district win late thanks to a few timely buckets in transition.

“Defensively, I thought we played as well as we have in a while,” New Braunfels Christian head coach Tony Brubaker said. “We helped well. They don’t have a ton of outside shooters who are consistent, so we got out on them but we weren’t as worried about them.

“They’re a great program. They’ve won two out of the last three state championships. They’ve got a culture of success and a great coach and we just played better than they did tonight. We made shots.”

The Wildcats torched OLH in the early going by beginning the game on a 13-4 run that featured seven points from Hunter Holly and six courtesy of Jordan Mesa. The Hawks quickly slowed the tempo of the game with a patient half-court approach, which allowed them to tie the game before Elijah Sexton connected on a shot to put NBCA up 15-13 after one quarter.

The deliberate pace of play continued in the next period, but a few strong putbacks by Jay Wade helped the Wildcats remain in front. Sexton, Holly and Hayden Holcombe each provided points as well to help New Braunfels Christian take a 27-22 edge into the half.

Mesa came up big in the third quarter, as he provided 10 of his team’s 15 total points.

He opened the period by banking in a 3-pointer, added two layups in the open court and later drilled a corner 3 off a pass from Holly.

Meanwhile, the Wildcats’ defense kept clamping down on the Hawks from every angle. A steal and a coast-to-coast drive from Sexton led to a three-point play that gave NBCA a 42-28 lead, and New Braunfels Christian continued to build on its lead down the stretch.

The Wildcats’ run in the final stanza was fueled by more pinpoint passing, which led to NBCA routinely breaking OLH’s press and cruising to the basket for quality looks. Sexton whipped no-look assists to both Wade and Holly to cap the night in style.

“What I’m most excited about is when they pressed us, we punished them,” Brubaker said. “We got layups almost every time or we had a chance to shoot a layup almost every time. That’s what you want to do when someone presses you, is you want to beat them on the back end with the layup.”

Mesa (16 points), Sexton (15 points) and Holly (13 points) led the way offensively, while Wade and Holcombe added eight and four points, respectively. Wade and Sexton were also instrumental in helping NBCA take control of the boards and limit the Hawks’ points in the paint.

“We talked about rebounding strong defensively because they stay after you,” Brubaker said. “We talked about taking advantage if you get a steal or a quick outlet, then attack the rim. I thought we did that pretty good tonight.”

New Braunfels Christian began the week with a 59-44 road win over San Antonio Keystone in the TAPPS District 4-3A opener for both teams. In that contest, Holly and Holcombe led the way with 13 and 12 points, respectively.

The Wildcats will now look to remain unbeaten in league play this coming Tuesday when they travel to Hallettsville to battle Sacred Heart at 7:30 p.m.