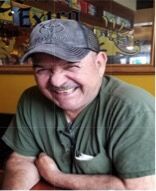 Felix was the epitome of all that is honest and good in the world and approached life with childlike enthusiasm, cracking a joke here and there and telling many funny stories from his childhood that often involved his siblings. He was extremely loyal and trusting literally to a fault. He graduated from New Braunfels High school and later earned an Associate’s degree from St. Phillips College. He served in the Marine Corps for 23 years retiring as a 1st Sgt. During his time in service he was stationed in many places around the world such as Hawaii, California, Okinawa to name a few and was deployed several times during The Gulf War, Operation Desert Shield, and Operation Desert Storm. He was loved and respected by his brothers and sisters in arms and strived to maintain the relationships he had cultivated during his time in the service. When he made a friend, it was for life. To list all of his accomplishments would be impossible as there were many, and he was so humble that he would not want to brag. However, to highlight a few would be acceptable to him. He was a loved and respected big brother to his siblings and was always happy and eager to give help and advice to his family. He was a single father who raised a daughter to the best of his ability and together they had a bond that no one could break. He was also a father to two sons whom he loved unequivocally and wanted to be more involved in their lives. They meant the world to him. He always said: “One day they will come find me” and they did.

The family respectfully asks that no donations be made to any fundraisers utilizing our loved one’s name as the immediate blood relative family does not support or endorse these endeavors nor would Felix have approved of these acts of solicitation on his behalf. We do ask that if anyone would like to send their condolences in the form of cards or flowers, we welcome these at 518 Southeast Terrace New Braunfels, Texas 78130 as we are happy to accept these in lieu of money.

Why Don’t You Do It Now?

Sometimes we go through our days like we’re going to live forever!

But, truth is, life can be very fleeting; we just don’t know how long we,

(Or those we love) have left. Life is just too uncertain.

Is there something you know you should do?

Do you need to speak a word of love to someone?

Or forgiveness? Or encouragement?

The best time to do it? Right now!