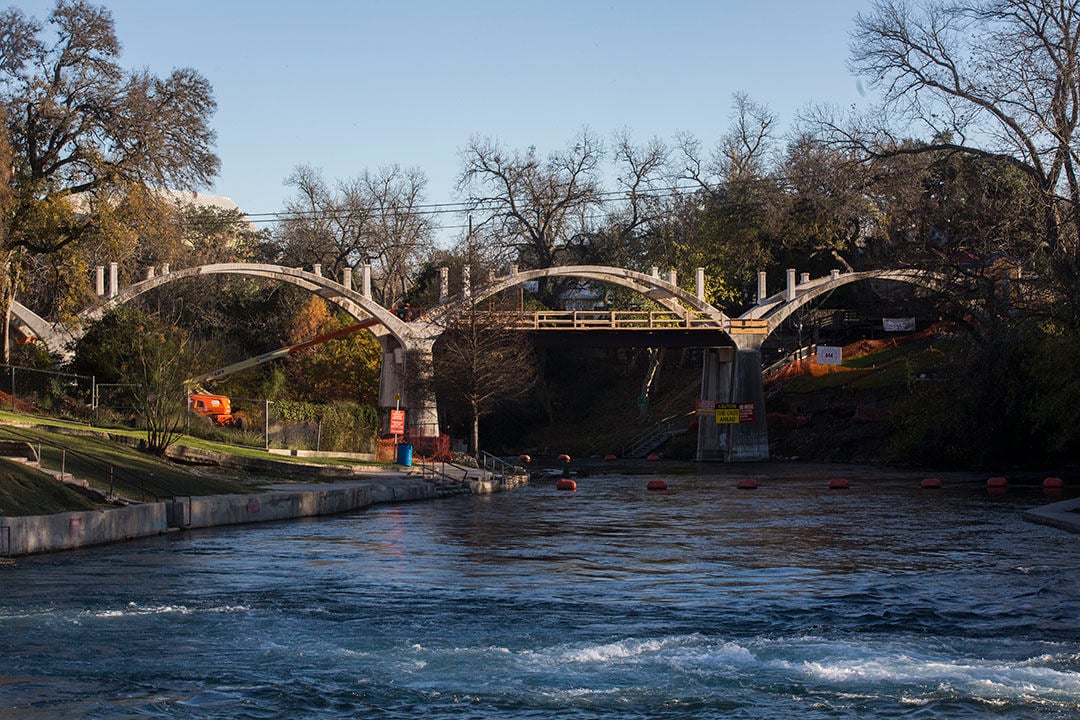 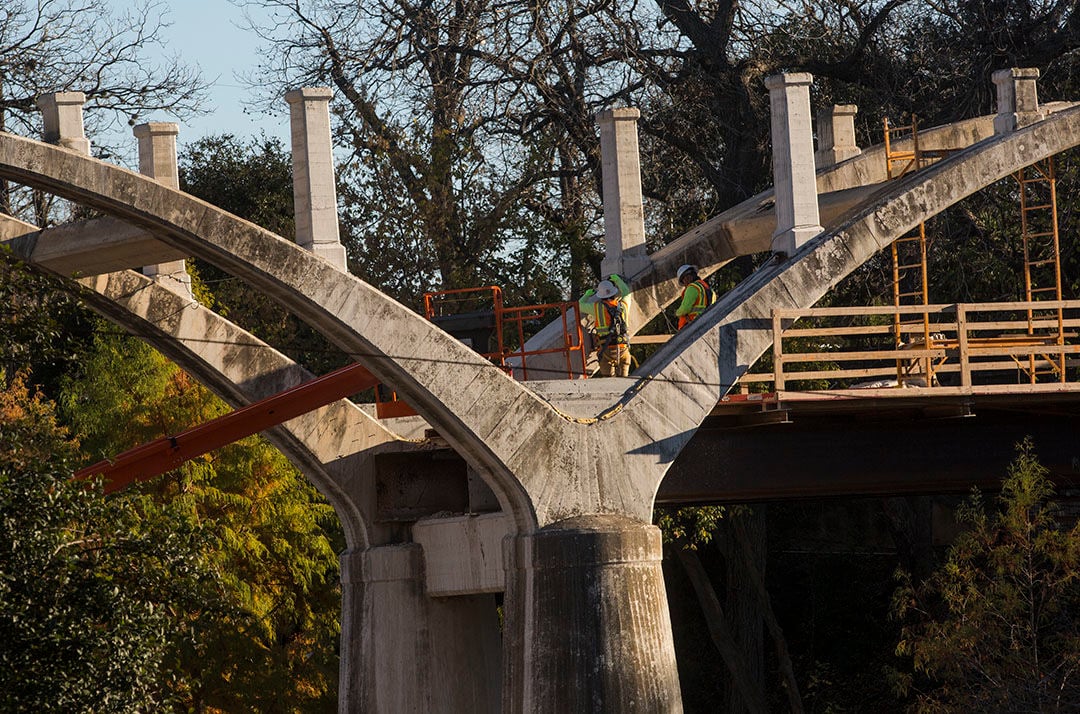 San Antonio Street’s Comal River Bridge, stripped of everything except pillars and arches, will soon be installed with caps and beams, both serving as the foundation for its transformation.

This week, project contractors are accepting deliveries of large, pre-cast bridge caps to be placed atop bridge support columns. Deliveries began Wednesday and are set to continue Thursday and Friday, causing some delays for drivers in the immediate delivery area. Capital Excavation Company is managing Texas Department of Transportation’s renovation of the bridge, which closed to vehicle and passenger traffic Sept. 3.

“The contractor will be setting pre-cast caps and beams in December and early January,” said Greg Malatek, city public works director, during Monday’s city council meeting. “The caps weren’t in the original plans, but Capital Excavation is using them to expedite the project.”

Malatek said the concrete beams will be ready for installation, instead of having to be formed with concrete poured and cured at the site. It will speed up the $4,518,896 restoration, funded through TxDOT’s Off-System Bridge Program, now slated to be completed late next summer.

The renovation is expanding bridge width from 28 feet to 44 feet, travel lanes from 10 to 15 feet and sidewalks from 4 feet to 8 feet.

The bridge, constructed in 1923, has five 70-foot arch spans and two 30-foot girder spans that will remain, but only for aesthetics. Its structure will remain the same, with footings reinforced for heavy vehicles to safely cross the bridge and crash-proof railings.

“The arches that held up the deck will no longer be used for support,” Malatek said. “The caps will be used to support the beams that will be placed atop the bridge deck. Using those pre-cast caps will knock a whole lot of time off the project.”

Since September, Capital Excavation has demolished the upper bridge deck and constructed a second deck underneath the bridge to catch debris from falling into the Comal River. The city established a River Safety Zone, barring river and pedestrian traffic in the construction area.

During construction, San Antonio Street traffic, measured at nearly 9,500 vehicles daily in both directions, is being detoured onto Comal, Union and Elizabeth avenues, Torrey and Garden streets and Hinman Island and Landa Park drives.

On Wednesday and Thursday, drivers were warned to expect several bridge caps and beams delivered to the area around 11 a.m., when trucks coming from Interstate 35 traveled down Loop 337 to Common Street and then into the Prince Solms Park parking lot.

“It shouldn’t take very long for trucks to make deliveries Wednesday and Thursday,” Malatek said, adding minimal traffic delays expected both days will change with Friday’s deliveries. Between 11 a.m. and noon, trucks will make deliveries to the other side of the bridge, causing temporary but significant traffic delays.

One truck coming from I-35 will head down South Seguin Avenue before partially turning onto the Main Plaza traffic circle. It will back up and head in reverse down East San Antonio Street toward the bridge. The city expects the maneuver, lasting around 30 minutes, will impact traffic on those streets, which will be patrolled by the New Braunfels Police Department.

The city said arrival times for the bridge structures are approximate and subject to traffic or weather delays. Drivers are urged to avoid delivery areas if possible, and to be patient if they are caught in areas experiencing traffic delays.

Malatek said once the caps and beams are place, pouring of concrete for the bridge deck will begin in late January or early February.

Comal River recreation under the bridge should resume by Memorial Day weekend, with the bridge reopening to vehicular and pedestrian traffic by the end of summer.

“We will meet with Capital and TxDOT after the beginning of the year to see of other activities can happen before Memorial Day,” Malatek said. “By then we’ll have a better idea of what’s going to happen.”

For more on the project, visit www.nbtexas.org/bridge.

In the next month, New Braunfels will lose a prime downtown traffic route as work begins on …

A look back at 2019: #5 Growth drives new construction

No look at the top stories of the year would be complete without writing about the growth and the construction that comes with it.