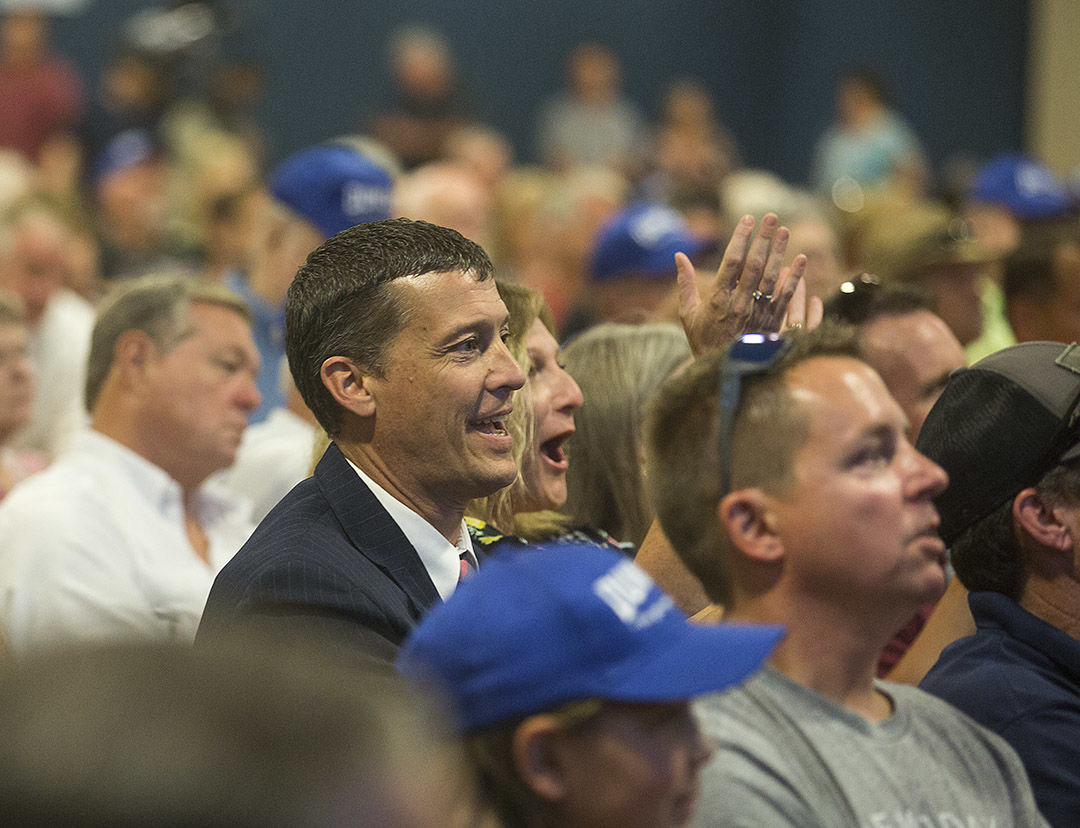 Lake Dunlap members and supporters cheer after a letter from the Guadalupe-Blanco River Authority was read to them during the Preserve Lake Dunlap Association town hall at the New Braunfels Convention/Civic Center on Wednesday, Oct. 9, 2019. MIKALA COMPTON | Herald-Zeitung 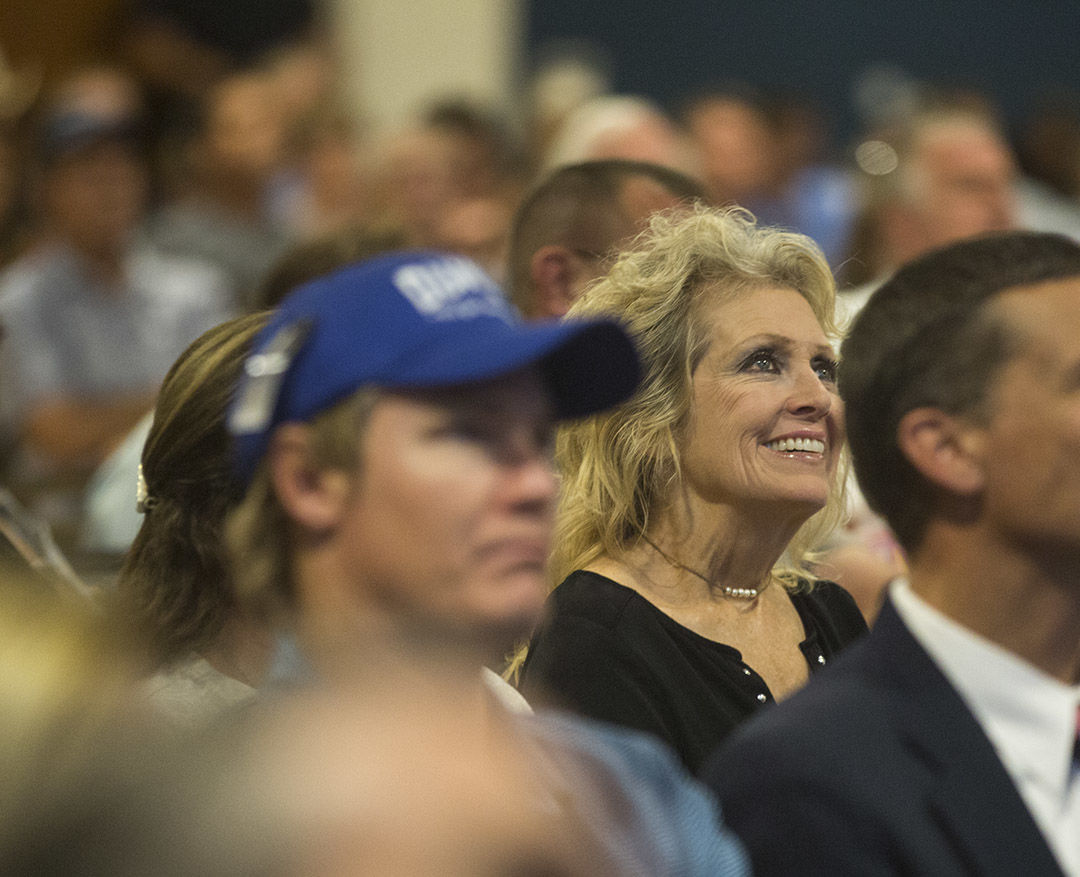 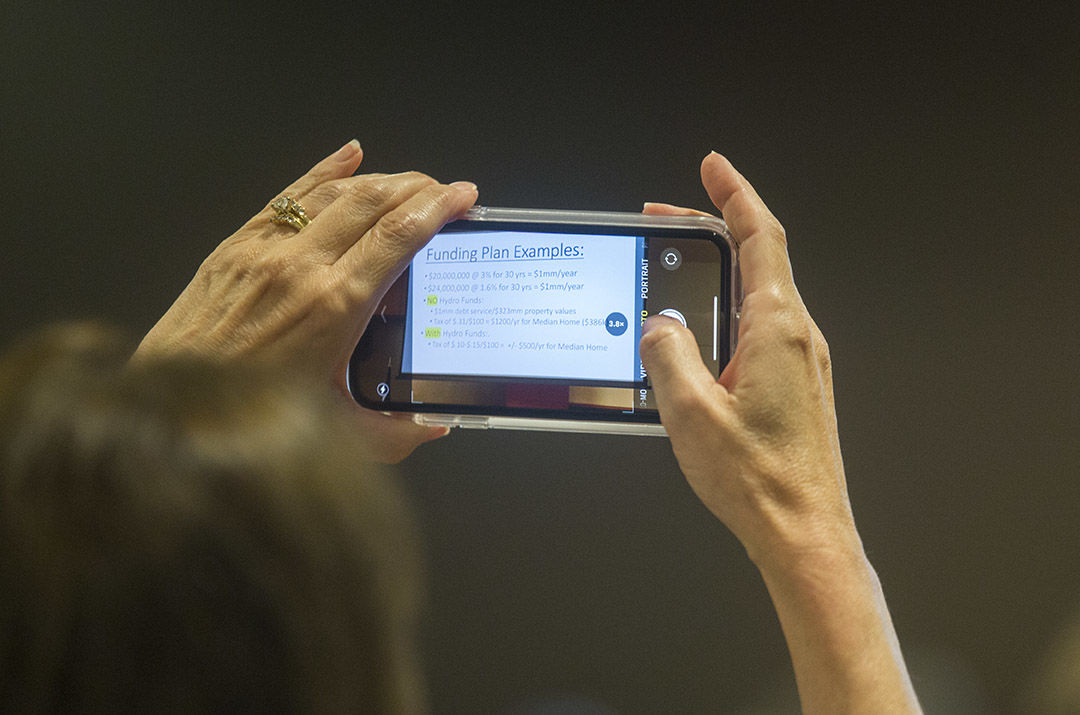 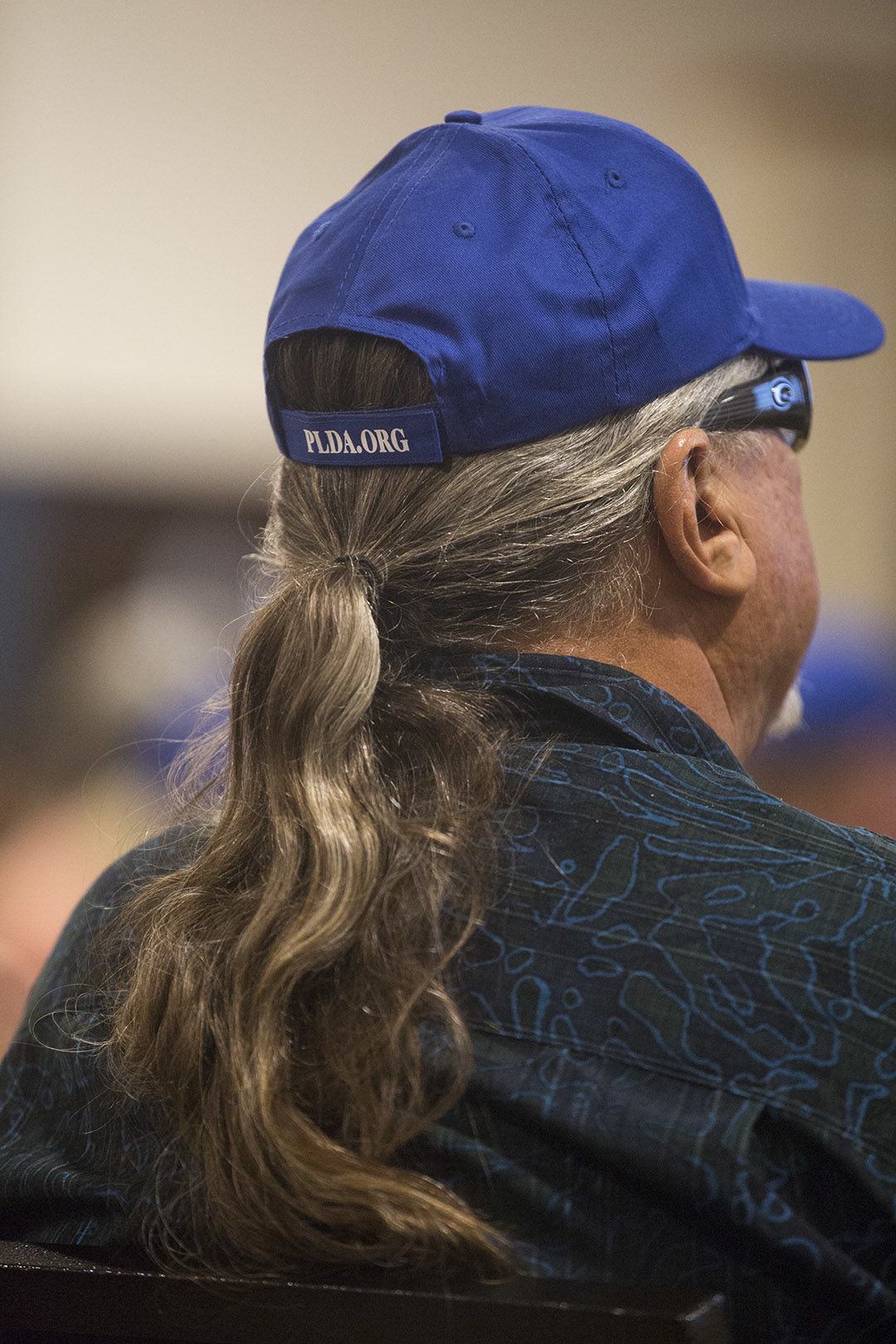 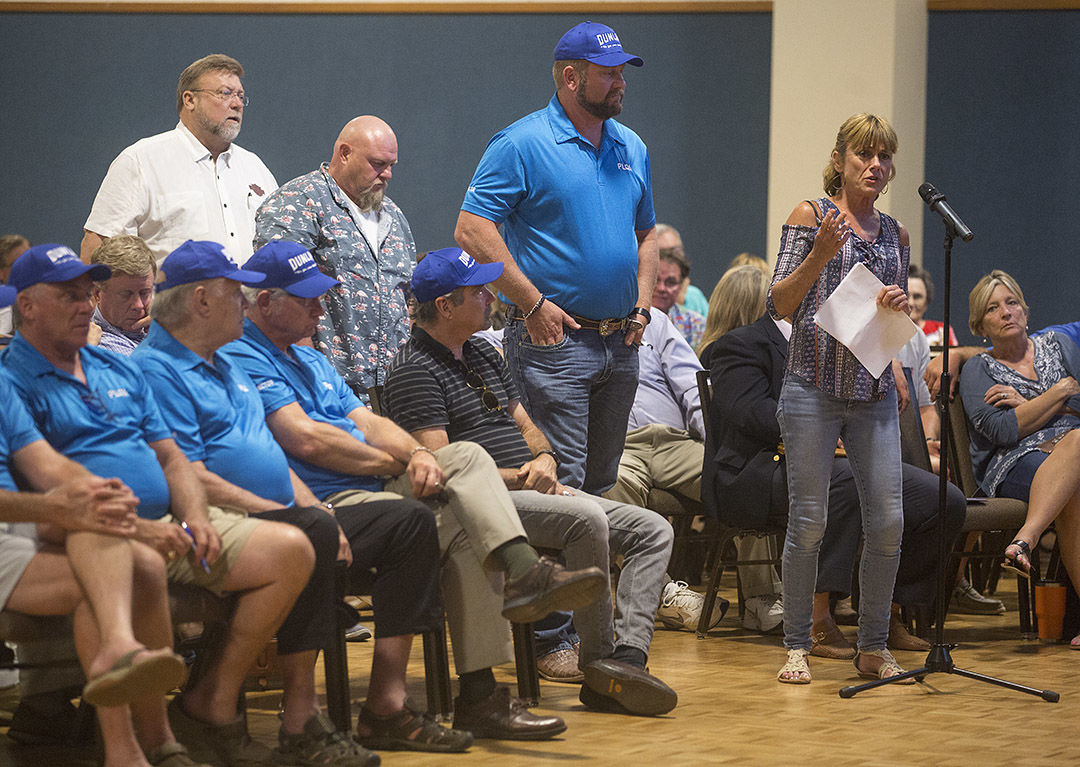 Lake Dunlap residents line up to ask questions to PLDA board members and officials during the town hall at the New Braunfels Convention/Civic Center on Wednesday, Oct. 9, 2019. MIKALA COMPTON | Herald-Zeitung 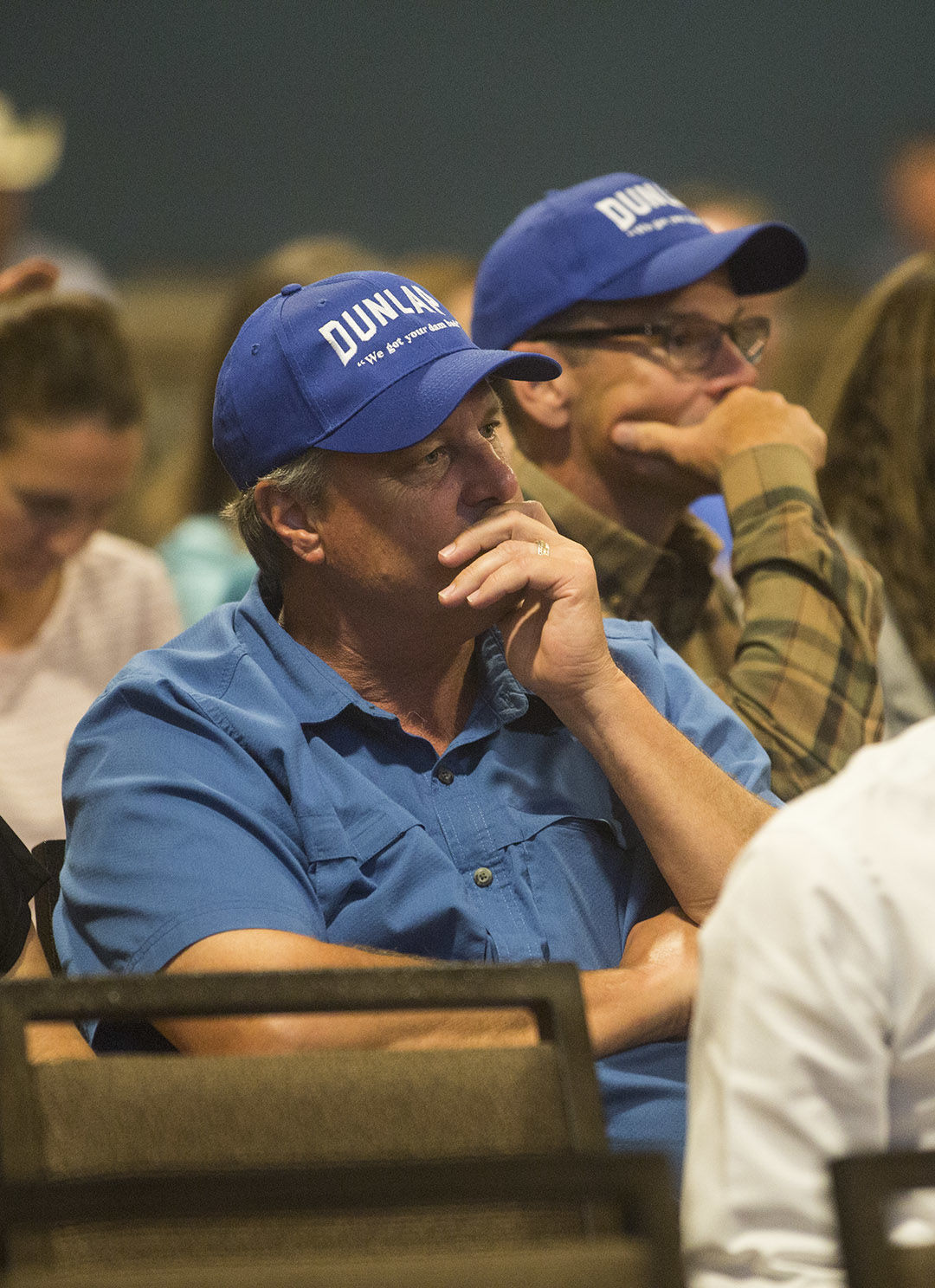 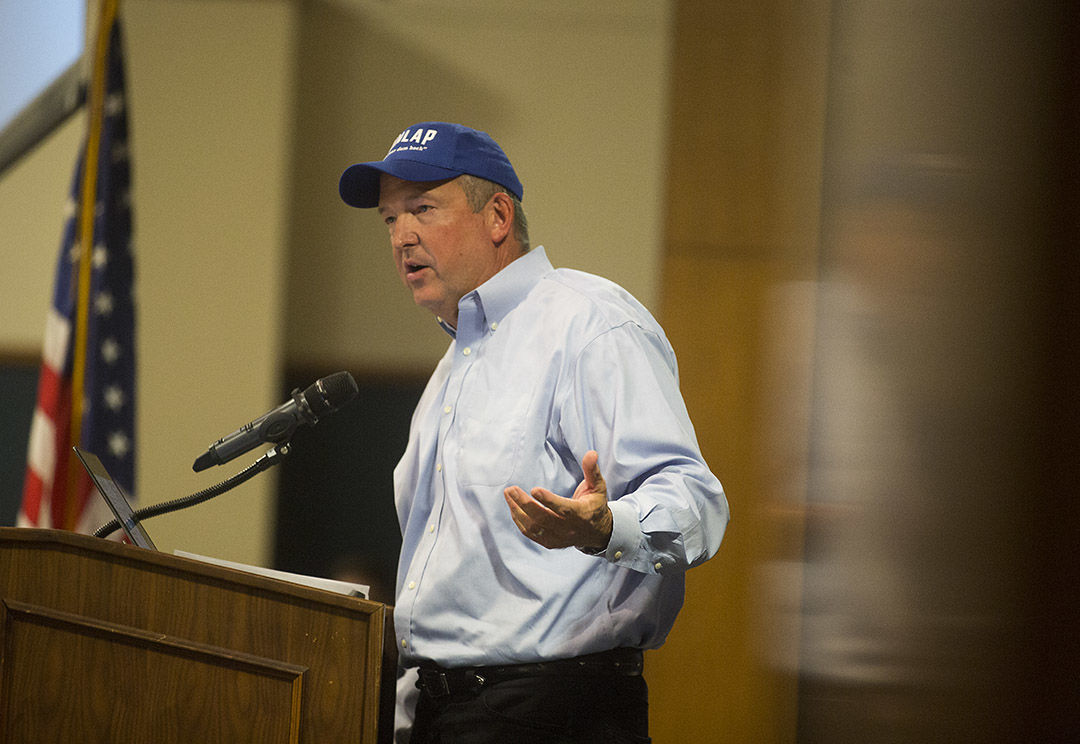 Lake Dunlap members and supporters cheer after a letter from the Guadalupe-Blanco River Authority was read to them during the Preserve Lake Dunlap Association town hall at the New Braunfels Convention/Civic Center on Wednesday, Oct. 9, 2019. MIKALA COMPTON | Herald-Zeitung

Lake Dunlap residents line up to ask questions to PLDA board members and officials during the town hall at the New Braunfels Convention/Civic Center on Wednesday, Oct. 9, 2019. MIKALA COMPTON | Herald-Zeitung

James Darrah went to the town hall meeting hoping for answers to questions about the lake on which his parents have owned property since the 1950s.

He got some of the answers he sought but others weren’t available, and that’s okay because he sees progress, Darrah said Wednesday night as he left the meeting the Preserve Lake Dunlap Association held to make a big announcement. The association came to a proposed agreement with the Guadalupe-Blanco River Authority to settle on funding and engineering for replacement of the spill gates that failed and are aging on the dam that created that lake.

“The big thing is how much and when,” Darrah said. “Honestly, they’re doing a ‘dam’ good job. Things like this are hard.”

PLDA board members announced at the meeting that the association has guarantees from the river authority, said J Harmon, PLDA president. GBRA will fund design and engineering for the new, hydraulic crest gates, issue debt to raise money needed for construction and contribute gross revenue from hydroelectric power generated on Lake Dunlap, Harmon said.

Property owners are expected to vote May 2, 2020, to establish a water control improvement district that will be responsible for the debt service, he said. Under the proposed plan, construction could begin as early as Summer 2020 and be completed by the end of 2021.

Guadalupe-Blanco River Authority officials have said they believe aging steel caused a spill gate to break free May 14 and open the dam at Lake Dunlap. The failure caused the lake to empty, leaving behind mud and debris in place of what used to be a lake.

GBRA owns and operates six hydroelectric dams on the Guadalupe River. Dunlap was the second of the dams to experience a spill-gate failure and empty following the 2016 draining of Lake Wood.

Since Dunlap drained 149 days before Wednesday night’s meeting, those most affected along the banks of the lake have toiled tirelessly to get water levels to rise again, Harmon said.

“I guarantee you we’ve been working on this for 149 days and almost 24 hours a day to get to where we are with this thing,” he said.

PLDA board members praised the effort from association members, but they also said they got big assists from Guadalupe-Blanco River Authority employees.

For its part, the river authority wants to be a good neighbor and collaborative partner to come up with long-term fixes for the dams in its Guadalupe Valley lakes system, Communications Manager Patty Gonzales said.

“To that end, GBRA is in strong support of Preserve Lake Dunlap Association’s proposal to create a water control improvement district to fund the necessary replacement of the spill gates at the hydroelectric dam at Lake Dunlap,” she said. “GBRA is prepared to present its board of directors with a proposed memorandum of understanding with PLDA outlining these agreements at the Oct. 23, 2019, meeting for formal approval.”

The river authority has said the aging dams — all upwards of 90 years old — need their spill gates replaced at an astounding cost. Officials have said the authority has no funds to make the needed upgrades, which has led to safety concerns with the prospect of injury should someone be on a lake or near a dam when the next spill gate fails.

Officials called for a draining of the remaining four lakes — Lake Gonzales, Lake Placid, Lake McQueeney and Meadow Lake. Members of lake associations in the Guadalupe Valley were up in arms.

Groups of property owners sued the authority, its board and staff members to stop the drain. The parties came to an agreement delaying the drain while experts conduct studies and all sides try to come to a long-term plan to save the lakes.

Guadalupe-Blanco River Authority personnel are interested in determining positive outcomes for all the lakes, not just Dunlap, Gonzales said.

“Meanwhile, GBRA will continue working with the other lake associations to determine the long-term solutions for the remaining lakes,” she said.

Of course, because the plan is still in its earliest stages, PLDA’s deal with GBRA still has some holes to fill.

The exact price tag for the new, high-tech, hydraulic crest gates remains unknown. An interest rate on the debt service also is unknown, so the amount Lake Dunlap lakefront residents will be asked to tax themselves has yet to be decided.

PLDA members suspect the replacement could cost about $20 million. With a desired 3% interest rate, the WCID could pay down the debt service at about $1 million per year for an increase of about $.31 per $100 valuation or nearly $1,200 a year for a median home valued at about $385,000, said Doug Harrison, a PLDA board member.

That was the contingent estimate in case GBRA is unable to provide funds from hydroelectric energy sales, he said. The numbers could be smaller with the authority’s help.

Acknowledging more information is needed and more answers have to be determined, Harrison said there are still great take-aways from Wednesday night’s meeting.

Darrah said he understands that it’s early in the process and some things still need to be decided. But overall the association is heading in the right direction, he said.

“I was a little worried when I came in,” Darrah said. “I feel a little better leaving.”

The Guadalupe-Blanco River Authority recently put the brakes on its $6.6 million plans for a…

Now that the independent expert panel’s report is in and unsafe zones on the lakes have been identified, how enforcement of prohibitions on th…

Though he knows things haven’t been run optimally, the Guadalupe-Blanco River Authority’s CEO said he is totally against a group of people sui…