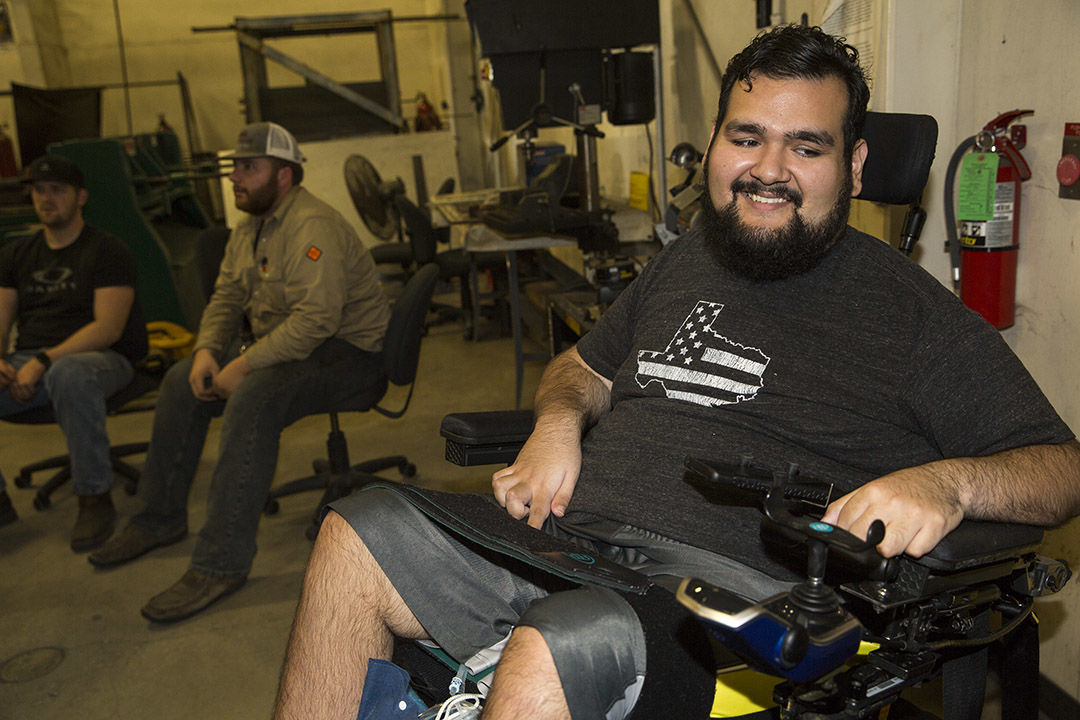 Logan Longoria smiles while talking with welding students at Central Texas Technology Center on Thursday, Oct. 17, 2019. Welding students made an attachment for Longoria's wheelchair that allowed him to hold his tablet in class. MIKALA COMPTON | Herald-Zeitung 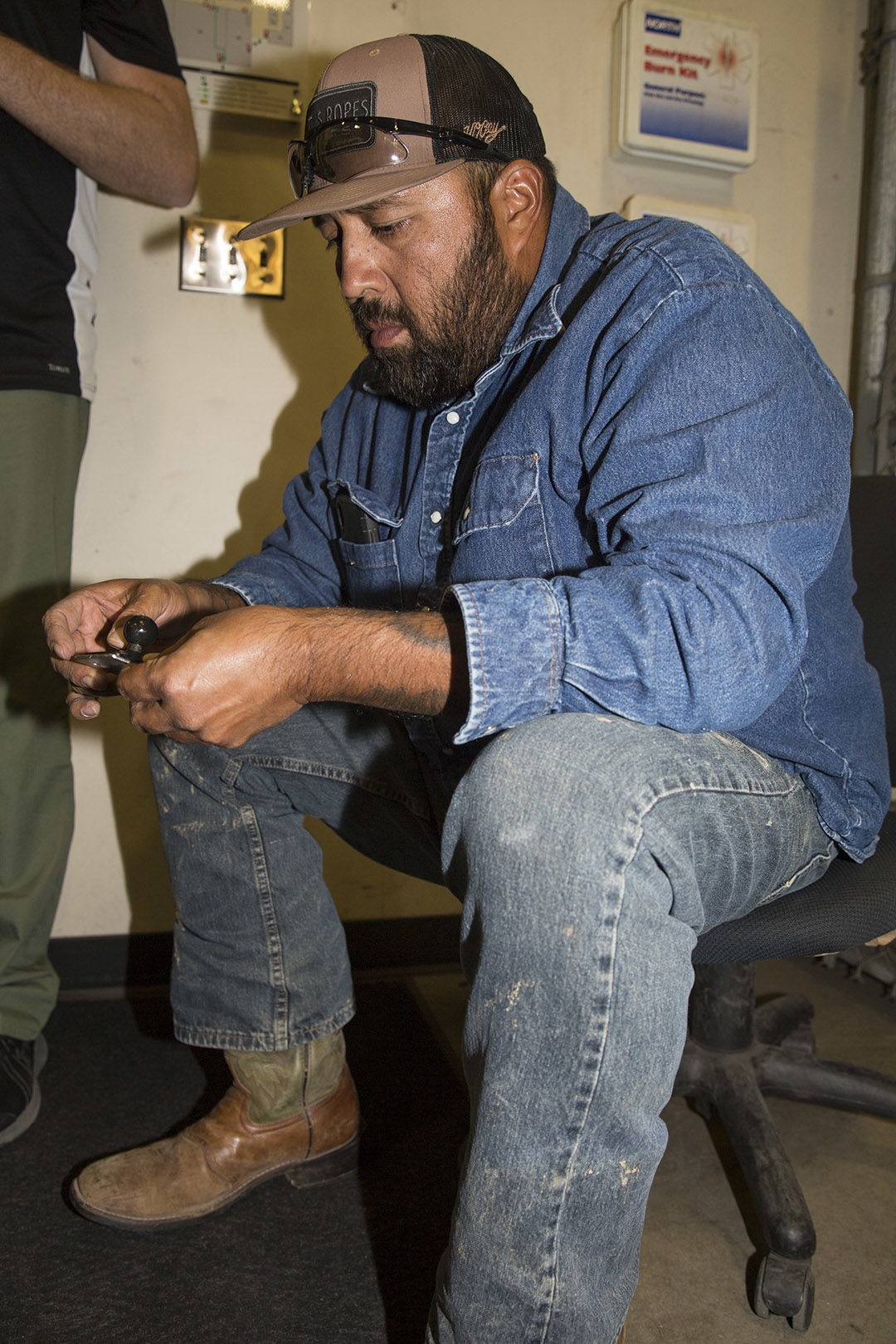 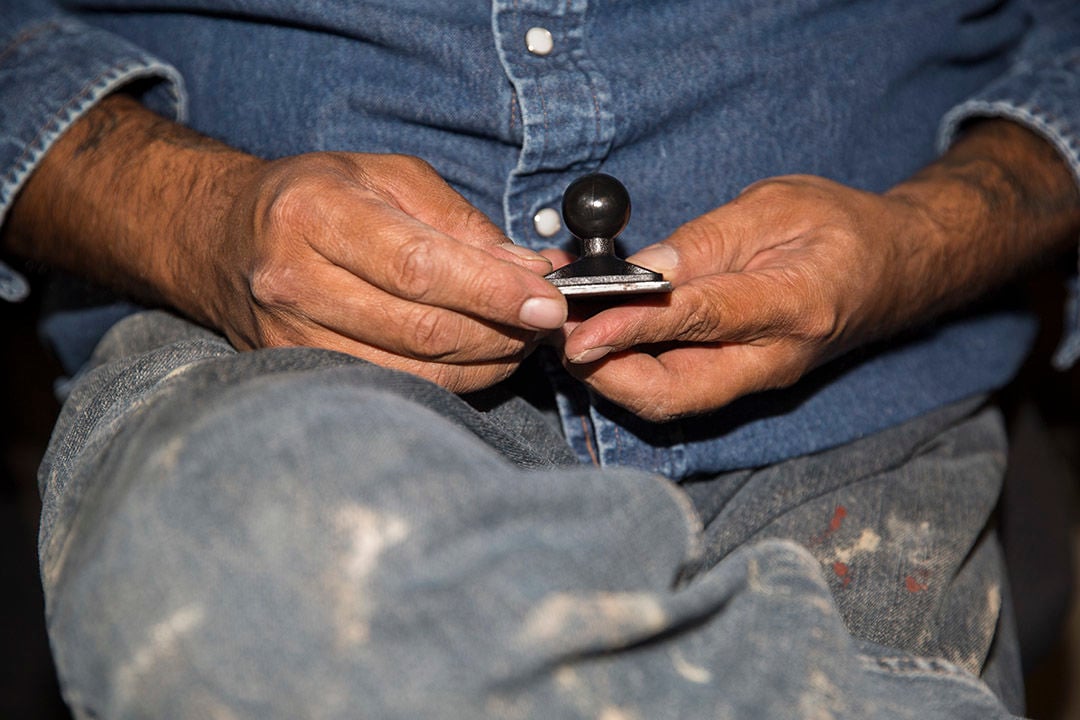 Logan Longoria smiles while talking with welding students at Central Texas Technology Center on Thursday, Oct. 17, 2019. Welding students made an attachment for Longoria's wheelchair that allowed him to hold his tablet in class. MIKALA COMPTON | Herald-Zeitung

When Central Texas Technology Center welding students found out their fellow CTTC student Logan Longoria needed work done on his wheelchair, they stepped up to the challenge.

Longoria, a New Braunfels resident who is studying cyber security, became wheelchair bound after a spinal injury at the Comal River tube chute five years ago when he was in high school.

Longoria is able to steer his electronic wheelchair through a hand fixture and relies on the aid of a nurse to help him move around. A cell phone attachment on his wheelchair allows him to hold his phone and text his friends, however he is not able to hold up his tablet in

When several welding students at the CTTC heard Longoria was hoping to get an attachment on his wheelchair that allowed him to hold his tablet, they stepped up to the challenge free of charge.

“I was already thinking I should take my chair to get this done somewhere when it all came together here in like 5 minutes,” Longoria said.

Janice Roth, director of the CTTC, said she was amazed at the generosity of the welding students.

“They’ve just been so humble about the whole thing,” Roth said. “When Logan brought his chair over, they started on it right away.”

John Lang, the welding instructor at the CTTC said his students and he thought it was a good cause and a good chance to practice welding.

“Our students go above and beyond,” Lang said.

Jorge Rodriguez, the student who worked on making the attachment, said he didn’t think anything of it, but was glad their work helped out a fellow student.

“We took the plate apart on the right side and kinda figured out how it fit together and then made a second one for the other side,” Rodriguez said.  “It wasn’t hard, it only took about an hour.”

The best part about the update was it could be completed while Longoria was at the CTTC for one of his classes, rather than him having to go out of his way to get it done, Roth said.

“Anything that can help make him more independent is just awesome,” she said.

Roth thanked the welding class for their help on Longoria’s chair, which was completed earlier this fall.

“Thank you all so much for helping Logan,” she said.

Their willingness to help Longoria was a real testament of the fellowship students at the CTTC feel for each other, Roth said.

“It’s great to see as our programs grow, the students remember how important community is,” she said.

Lang said his students were happy to help.

“They can weld just about anything,” he said.

For more information about the CTTC, visit  www.alamo.edu/cttc/central-texas-technology-center/. The CTTC is located at 2189 FM758, New Braunfels and is a part of the Alamo Colleges.