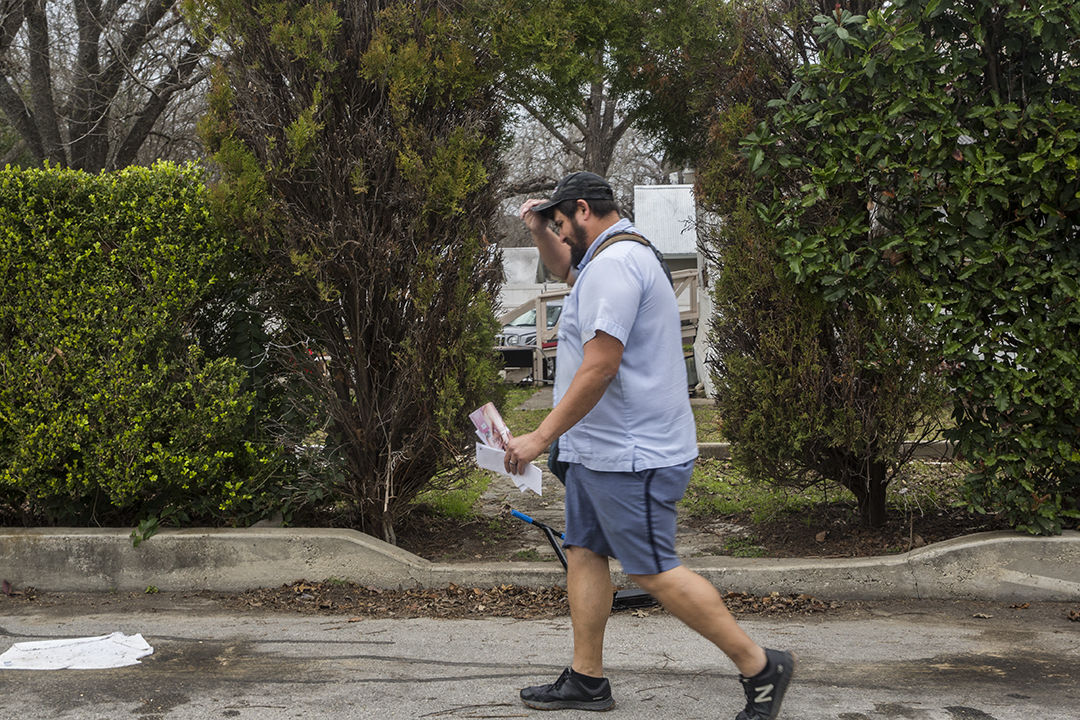 Mail Carrier Onofre Garcia walks in the street while delivering letters on Saturday, Feb. 15, 2020. The lack of sidewalks can cause mobility issues for some residents. MIKALA COMPTON | Herald-Zeitung 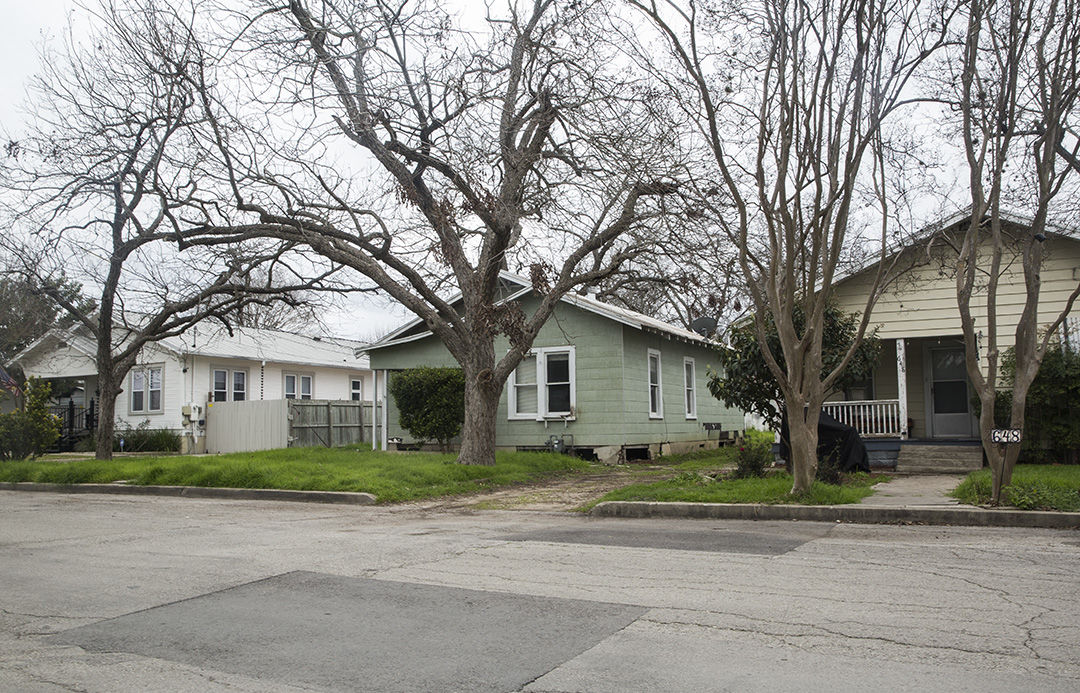 Mail Carrier Onofre Garcia walks in the street while delivering letters on Saturday, Feb. 15, 2020. The lack of sidewalks can cause mobility issues for some residents. MIKALA COMPTON | Herald-Zeitung

Anthony Villarreal, 52, was threatened by a neighbor several weeks ago over a communication mixup, and Villarreal wanted to submit a report to the police.

He was told to go to Municipal Court to submit a form from the police — a problem, because he doesn’t have a car.

“How am I going to get there to file this report if i have no transportation during their day?” Villarreal ased.

Villarreal broke his back several years ago when a car hit him as he was biking in San Marcos. Several of his lumbar vertebrae were broken. He also has a bone tumor in his left arm and suffers nerve damage from using his arms frequently for daily tasks that are now extremely difficult, from showering and folding laundry to driving.

New Braunfels is the second-fastest growing region in the nation. While master-planned communities and new businesses are sprouting up, some people are falling through the cracks during the city’s growth, Villarreal said.

The city is conducting a public transit study to create a fixed-route bus line, sponsored by the Alamo Area Metropolitan Planning organization. The study is ongoing, and may take years to finish collecting demographic data and public feedback to develop a route.

With the city constantly growing, Villarreal said he is concerned for people like him and those with lower incomes who struggle with basic tasks and urgent needs.

“What do people do in New Braunfels with transportation, especially since it’s expanding and people are moving farther out?” Villarreal asked.

Quoting Junfeng Jiao, director of the Urban Information Lab at the University of Texas at Austin, the U.S. News and World Report said there are more than 50 U.S. cities and metro areas lacking public transit, called “transit deserts.”

People living in transit deserts often face lack of access to fresh food and medical care, since many cannot find a way to reach a grocery store or their doctor appointments.

It could take Villarreal hours to walk to H-E-B due to his medical condition, and he would need to stop frequently to not strain his muscles.

Grocery shopping is a momentous task, and he has an assistant through his disability benefits but can not use them frequently. Villarreal has some helpful neighbors, but most of them work during the day and he does not want to be a burden on anyone.

“I see stuff all the time like on the app NextDoor or Facebook like ‘Hey I need a ride,’’ Villarreal said. “And there are some people that offer but for me it’s the money. When you’re only getting $731 a month, that’s not a lot.”

Since Villarreal is on disability, he can only earn so much and is given so much each month.

His rent in his small, one-story house is about $1,300 a month, and without his former roommate he struggles to save money for necessities like food to ease his diabetes.

On top of his physical disabilities, he also experiences depression and anxiety.

Prior to being hit by a car in San Marcos, Villarreal had quit his real estate job and moved to New Braunfels to take care of his sick mother, who passed away in 2013. For about a decade, Villarreal experienced sleepless nights and days without eating properly, causing his diabetes.

The diabetes has caused neuropathy, meaning he experiences a weakness and pain in his hands and feet due to nerve damage.

“I can’t even walk,” Villarreal. “I get in the shower and the water hitting my foot feels like I’m getting poked with needles and it just hurts so much.”

With everything piling up, Villarreal said he feels like he is in a cycle of low-income and lack of care. Although he has some services and help, Villarreal said those without any assistance can only “wilt away” in their home.

Even for those without medical disabilities, Villarreal said it is difficult to walk in his neighborhood off Santa Clara Avenue for fear of getting hit by cars coming down the street.

“Half the streets don’t have sidewalks, so they’re out in the middle of the street,” Villarreal said. “People park the wrong way against traffic, and I’ve almost been hit a couple of times because they pull out and they can’t see me.”

According to New Braunfels’ city ordinance, it is the responsibility of “owners, occupants and users of real property” to maintain sidewalks.

That assumes there are sidewalks to maintain.

“We’ll see what happens when I get hit by a car and a lawsuit happens,” Villarreal said. “Other people in wheelchairs and stuff like that, there are no sidewalks.”

Getting around New Braunfels: PART 1

More and more people are moving to New Braunfels. Sometimes they are newcomers to Texas whil…

Vicky Kramer, 53, is retired with stage four breast cancer and mostly spends her days in her New Braunfels home off Gaines Street.

Transportation is a big issue in New Braunfels. They state a study needs to be done in order to start a bus system? Years ago, the city had started a bus system what happen to those studies??? The handicap do suffer, my wife is handicap and Alamo Transfer wants notice when a Doctors appointment transport is needed. Sometimes planning ahead is not possible and the handicap person gets left behind. There has been times my has not had recourse and I have ended being her transportation which isn't a problem if I am not working.

In my old state of Colorado, The American Red Cross had a fleet of cars which used to transport elderly and handicapped people to doctor appointments and the grocery store. I wonder if they still do that and if they would for New Braunfels. A bus system would be extremely expensive and everyone I know is sick to death of paying taxes and watching it get wasted in pet projects and extravagant school facilities. When we first came here, the fact every high school had a professional level (from our point of view) football stadium was dumbfounding. We just used ONE Stadium per county and scheduled the games. Teams were transported by bus. Honestly folks, you don’t have to throw millions of dollars at every little problem.

Amen, David! Buses are huge polluting machines. Surely we can come up with something else? The faith-based organizations could organize and help with this. Remember, we are supposed to assist the poor. New Braunfels is small enough that getting from one side of town to the opposite side of town is not a struggle. Let's figure out how to help our neighbors and not waste money on buses.