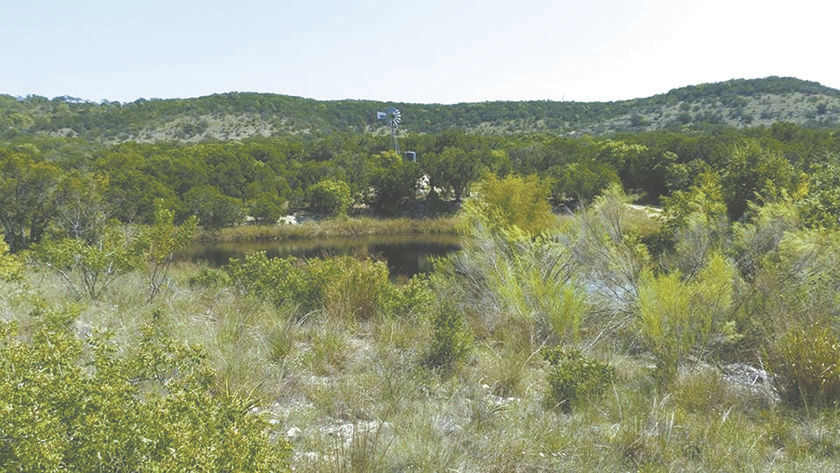 El Rancho Cima has a long history dating back to 1954. It is is made up of land that is still mostly undeveloped. Photo by Leslie Collier 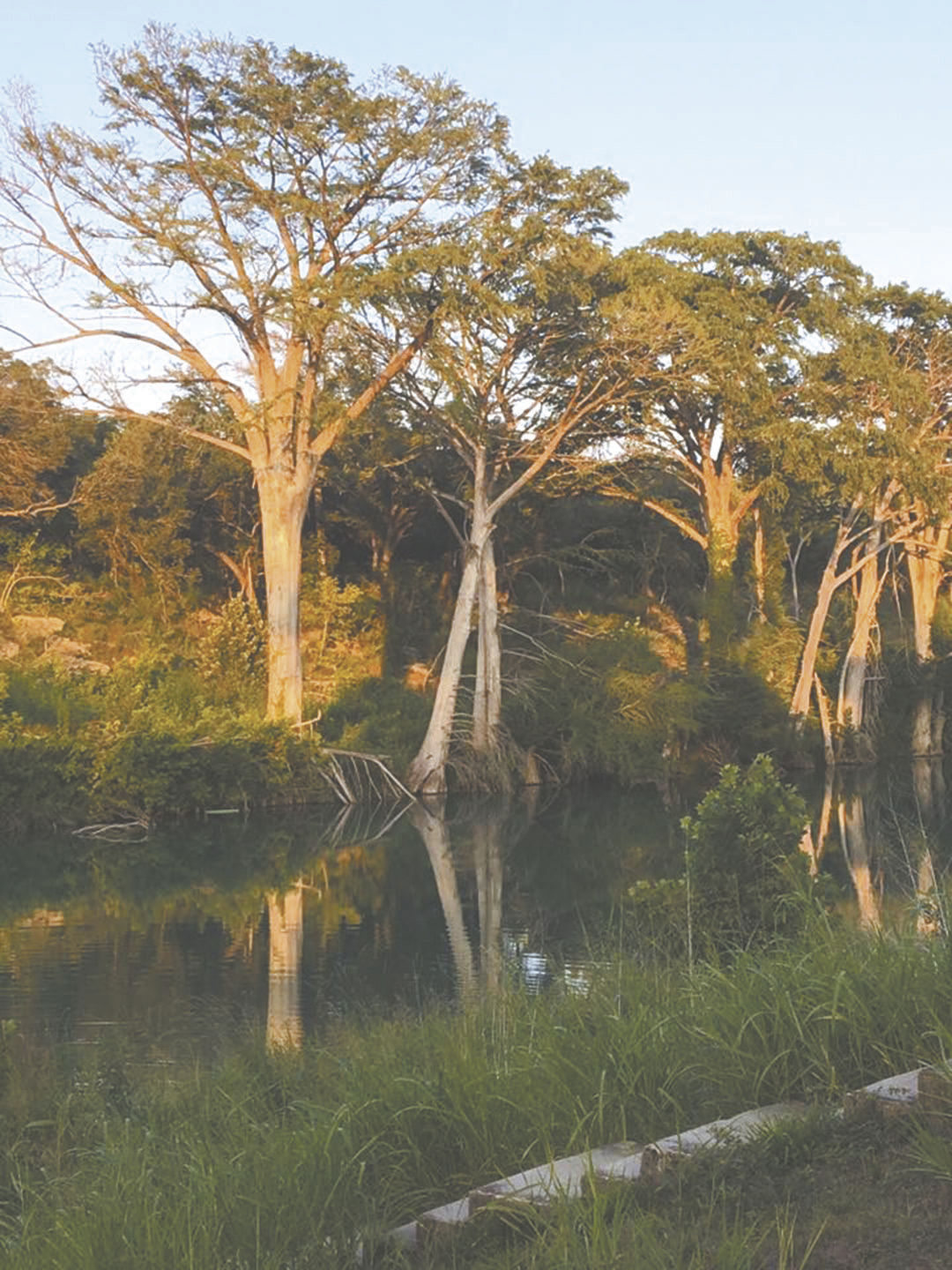 El Rancho Cima has a long history dating back to 1954. It is is made up of land that is still mostly undeveloped. Photo by Leslie Collier

For Leslie Collier and her husband Randy, El Rancho Cima isn’t just the property next door — it’s the reason they chose to live where they do.

Located on the Devil’s Backbone, El Rancho Cima’s 2,382 acres was purchased in 1954 for $145,000. In April, the property was bought by a developer and divvied into seven parcels, two of which Comal residents and environmental advocates are hoping the county will help purchase and preserve.

Two of these residents and advocates are the Colliers, who moved to the area seven years ago.

“I love the Texas Hill Country and I started noticing massive changes and development. It made me sad. I would pull over on the side of the road and photograph a tree or a cow, because there was such beauty I wanted to photograph it and those places are disappearing,” Collier said.

Late last month at an informational luncheon, Collier shared her story about El Rancho Cima while making a plea to fellow local residents — ‘help save the backbone.’

Collier spoke of her 90-year-old father, who was an avid supporter of the Boy Scouts, having paid his dues to them for 82 years — even during his time serving overseas in Korea.

“I grew up attending summer camps because my dad was the director of many Boy Scout camps, and it was a blast, and I learned amazing values,” she said. “When Randy and I found our land, a part of the tug on my heart was that it was across from El Rancho Cima. Randy is an assistant scout master and an Eagle coach and we could see ourselves wandering over and volunteering at the camp someday.”

Collier said her mother raised she and her siblings, ‘If you don’t like the law, work to change it, don’t just break it.’

“That’s in the scout oath,” Collier said. “So when the Boy Scouts put this land up for sale, I was just gob smacked they wouldn’t have restrictions, because of all the things Boy Scouts teach is to be good stewards.”

Over the year, many donations were made and in 1956 Coca-Cola donated $2,500 to build that dam across the Blanco, Collier said.

“The land is still mostly undeveloped with pristine wildlife habitats on hundreds of acres. It’s close to the Comal River, it falls on Comal and Hays County and the topography is one of the most unique in Texas,” she added.

“The Devil’s Backbone Overlook is listed as one of the top 10 scenic views in the United States,” she said. “This land is home to the golden cheeked warbler and blind salamander and most importantly it sits above the Edward’s Aquifer recharge zone. I had a difficult time trying to understand why the Boy Scouts would sell it with no restrictions and when I learned the land was for sale, my husband can attest, I cried on and off for about three weeks.”

“And I realized that somebody was me,” she said.

“My minister and long time friend Gerald Mann often spoke of our how our church came to be and the obstacles he had to overcome,” Collier said. “Gerald always said when you’re in miracle territory, you have to expect a miracle. So my dear husband held my hand, push, pull and shove, we started looking at how to save El Rancho Cima.”

Collier said she expected somehow, someway for a way to raise $24.5 million — that would be their miracle.

“On a very hot day in June of 2017, over 10,000 people came to the decommissioning ceremony to say goodbye to their beloved camp,” Collier remembered. “Grandfathers, fathers, sons and daughters who had camped at this camp came from all over. Then in August of that year, another 30,000 people showed up over a three-day weekend for the auction to purchase camp equipment and supplies the council was selling, hoping to take some memorabilia home.”

It was at this auction Collier said she realized that people thought the land had already sold.

“They were grieving because they’d been told the land had been sold — but it hadn’t,” she said. “So we realized again we had an opportunity.”

Advocates of the cause helped to form a nonprofit to raise funds with the hope of preserving the land and protecting the Blanco River, Collier said.

“Three times this land went under contract,” Collier said. “Twice their funding fell through, and once with Red McCombs, we would like to think that we prayed him away.”

“We got busy — we made over 1,000 phone calls everyday about land conservation and preservation,” she went on. “We connected with the Hill Country Alliance, the Nature Conservancy, the Land Trust, we went and met with Hays and Comal County commissioners to discuss mitigation mains, we met with David Baker and Kathleen Krueger, we met with Helen Ballew, we met with the CCCA, Bill Bunch wrote a letter on our behalf to the council asking him to take the land off the market to give us time to raise $24.5 million and they said no thank you.”

She and her husband spoke any place to any audience who might listen, Collier recalls. Whether it was meetings, gatherings, workshops, events or functions, they tried to be there to educate their fellow residents.

“We had banners made you may have seen that said ‘Save the Backbone’ that we hung by the light of the moon at the overlook,” Collier said. “I will tell you that was one of the most successful ways to communicate with the community. They didn’t know that land was for sale and people would go online and look up this organization and it was amazing.”

Collier said she and Randy also met with neighbors on either side of the property, who were grieving that this land would be developed.

“There’s a wedding venue on one side and rangers on the other, and the lady who owns the wedding venue said, ‘You can host concerts, I’ll help you with fundraisers, use my venue,’” Collier said.

Another time, a woman reached out to Collier to ask if she could make a mini documentary about the ranch.

“I met with a producer and some of her students and we got permission from the neighbors to use their property,” Collier said. “Someone sent it to me two weeks ago. It’s just magical.”

Whether it was talking to someone at a barbecue joint or discussing their ‘Save the backbone’ bumper stickers over coffee, Collier said she and Randy tried to bring it up often.

“We were teetering between passion and obsession, and we thought we were very close to having funding with various groups to purchase the land so we would continue hosting camps, we wanted to open up seasonal water recreation to the community and create mitigation banks for Hays and Comal counties,” Collier said. “Then in April we heard the land had sold and I had to make my peace with it.”

After two years of working non-stop for this project, Collier said she learned that investors had purchased the camp.

“And we truly believe our miracle was having this group purchase the land,” she said. “I believed that with my whole heart because it took it off the market and now it will allow neighbors and perhaps the counties the time and opportunity to purchase a portion of the land.”

For 64 years, men, women and children have had life-changing adventures in character building experiences on this property, Collier said.

“We still need somebody to do something to protect this land,” she said. “We still need someone to conserve it. Somebody I know who cares about this effort. I continue to believe we have a purpose and a plan which will result in our miracle.”

Residents who believe in this mission or who feel strongly about it should talk to their county commissioner or county judge, Collier said.

“If you are interested in seeing Comal invest in the conservation of our natural resources, please reach out to these leaders and let them know,” Collier said.

For more information on how to contact the county commissioners and judge, visit http://www.co.comal.tx.us/Comm.htm.

Is it that hard to include a map in the images in stuff like this?

Whoa she cried for weeks? This is not a sane woman.

We need to save some of the Texas hill country that is so close to being annihilated. I'll be praying for help to save this property and thwart developers efforts.