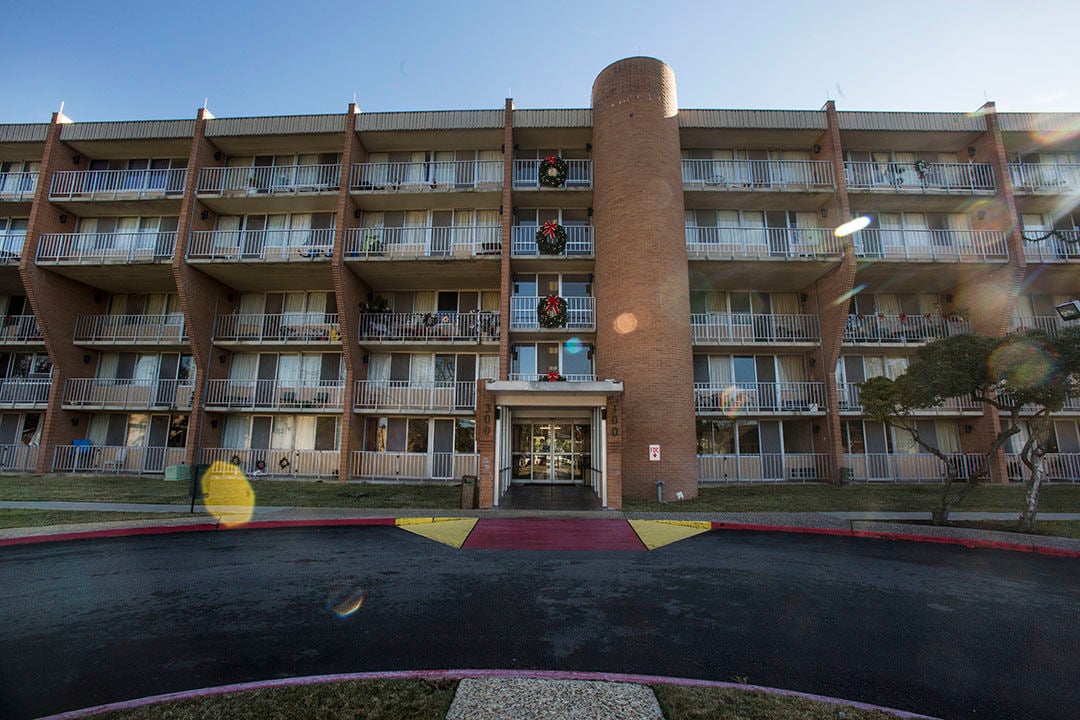 Laurel Plaza staff are hoping to create partnerships to secure additional streams of revenue. As of right now, federal funding is its only source. 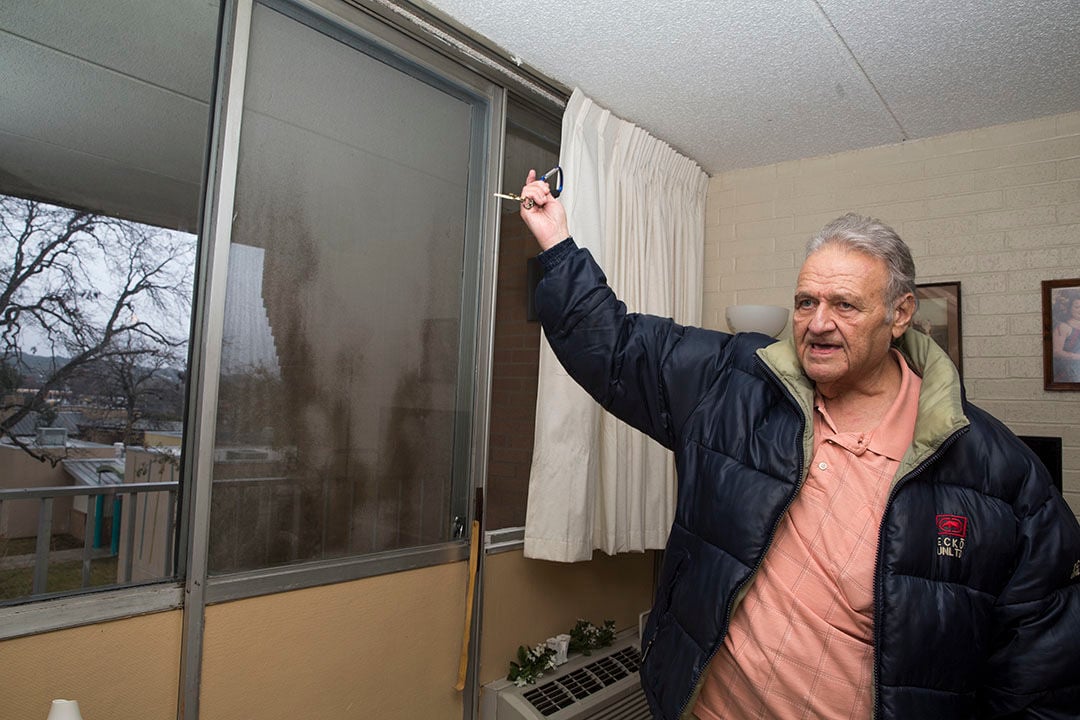 George Wilkenson points at the mold in his apartment at Laurel Plaza on Friday, Dec. 20, 2019. “I got asthma and I've been having mold sickness. You can smell it and it’s aggravating. I’m tired of breathing it," Wilkenson said. MIKALA COMPTON | Herald-Zeitung 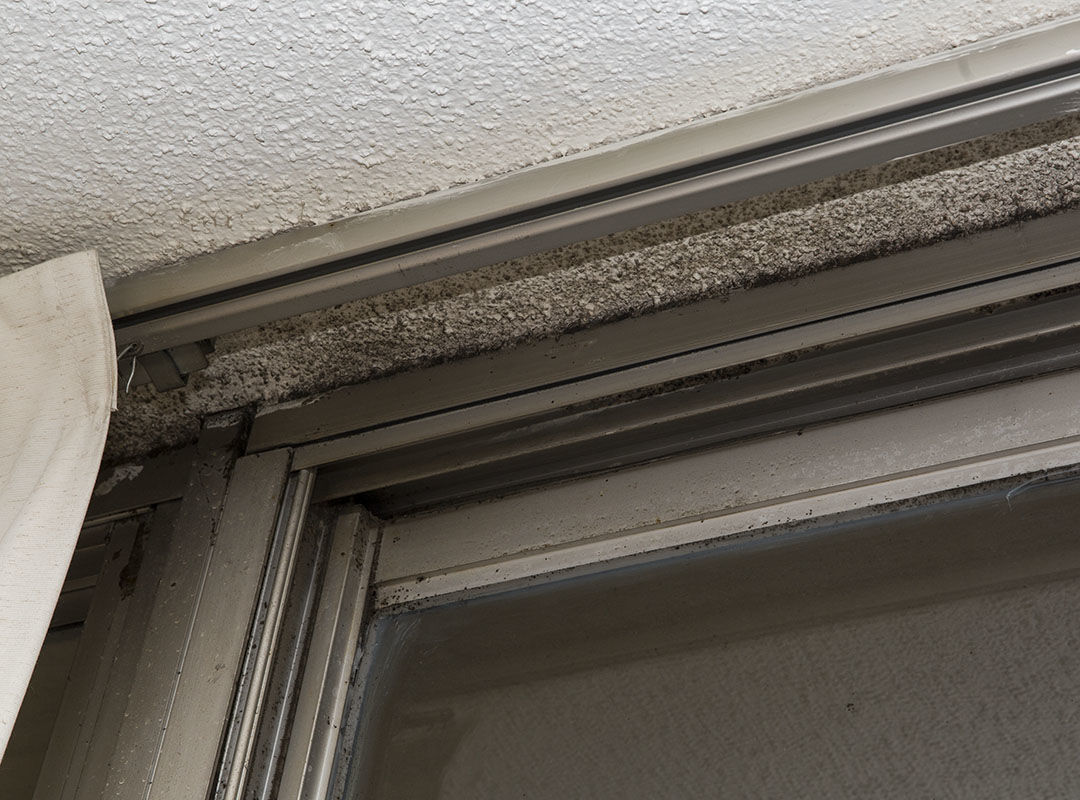 Laurel Plaza staff are hoping to create partnerships to secure additional streams of revenue. As of right now, federal funding is its only source.

George Wilkenson points at the mold in his apartment at Laurel Plaza on Friday, Dec. 20, 2019. “I got asthma and I've been having mold sickness. You can smell it and it’s aggravating. I’m tired of breathing it," Wilkenson said. MIKALA COMPTON | Herald-Zeitung

Editor’s note: This is the second of a two-part series catching up with the situation in Laurel Plaza. In February the newspaper published several stories about poor living conditions at the apartments.

It’s been less than a year since Laurel Plaza residents talked about living with rats, bed bugs and the stench from rodent carcasses that overwhelmed visitors.

There was also a deep culture of fear, with people hesitant to talk about the problems, worried they would be forced to find another place to live.

For many there — elderly, handicapped, and low income — options are few.

Since the media scrutiny that came with a February story in the Herald-Zeitung, residents say things have changed dramatically.

In addition to tackling the rodent and bed bug problem, and pledging a new spirit of transparency, new leadership with the New Braunfels Housing Authority that oversees the property have made other changes.

Staff went out of their way to improve the landscaping on the site to improve the appearance and concentrated on maintenance issues that are to be expected with a building that’s more than four decades old.

“We trimmed the trees, the generators have been repaired, the elevators are repaired periodically,” Laurel Plaza’s interim executive director Henry Alvarez said. “This is a 40-year-old building, we continue to have to do ongoing maintenance.”

“That doesn’t make sense, so we’re replacing those items as need be,” Alvarez said.

There have also been personnel changes at the site, with some changing faces. There are only eight full time staff members — three of which are maintenance, Alvarez said.

“People have gone out for many reasons — medical, lifestyle changes, moving, new jobs and as those folks have done that, we’ve hired new folks to assist with that,” he said.

One longtime employee still present at Laurel Plaza is Programs Manager Mickey Lloyd — an employee many residents said they had issues with. For some, those issues persist.

“Mickey’s just Mickey — doesn’t like me, runs from me — every time, I don’t know what his deal is,” Jason Mickel said.

Mickel, a San Antonio resident whose mother lives in Laurel Plaza, previously told the Herald-Zeitung that Lloyd wouldn’t return messages, and would talk down to his mother.

When the Herald-Zeitung reached out to Lloyd in February for comment, he said he didn’t feel comfortable answering questions.

A third person, who asked to remain anonymous, told the Herald-Zeitung while most of the residents love Alvarez, no one likes Lloyd.

“Llyod, has been harassing me since last year,” she said. “He’s harassing me, threatening to evict me but theres nothing in violation of my lease that he’s coming at me with. I went to the director, Henry, and he was there for me.”

She said that the harassment stopped for a while, but has resumed.

“I stay to myself. I’m not in and out. I don’t do drugs. I don’t drink, I don’t do nothing,” she said. “I just smoke cigarettes, that’s it. I cause no problems, I give no problems. My rent is paid every month on the first. But I’m getting harassed by Lloyd and enough is enough. And it’s not only me. A lot of residents here are scared of him.”

While work has been done at Laurel Plaza to improve living conditions and make residents more comfortable, there’s still work to be done, Alvarez said.

All of the funding for the housing complex still comes from federal sources. Alvarez said he hopes the NBHA can partner with other organizations, and the city to help supplement funding.

A private partnership would be a huge help, Alvarez said.

“We would like to have some funding for our community center,” he said, indicating this would go toward more programs and activities for residents.

In the next year, Alvarez said he hopes to see the resident’s library in the main entranceway closed into an actual room, and would like to have Laurel Plaza open over the lunchtime — goals not possible with the current amount of staff and funding.

“One of the things in the future we’ll be looking for is partnering with other providers who give mental health services,” he said.

Alvarez said Laurel Plaza will continue to improve and invited the community to come see the facility for themselves.

“I give it two to three years from the start — from (my arrival on) Feb. 11 — I think we should have the problem under pretty good control,” Alvarez said. “As you look — you’ll see people walking around, it’s not like it was on (Feb.) 11.”

This is a situation that the Herald needs to stay on top of. The city talks about affordable housing but basically drops the ball when the citizens need more. There should be a free shuttle that takes these folks up and down Walnut to the HEBs and Walmart. The street crossings should also have signs designating the handicapped/wheelchair crossing. The sidewalks need to be maintained yearly. I've always thought what an inconvenient area to live if you are disabled.

Mickey Lloyd, he sounds like he needs to be replaced by someone with compassion for the residents and enough intelligence to manage the building successfully.

Our seniors and disabled low income folks deserve a friendly clean place as much as anyone.

[smile]Good Job Henry. I had a cousin that lived there but I wasn't aware of all the problems. Just because you are on limited income doesn't mean you should have these problem.