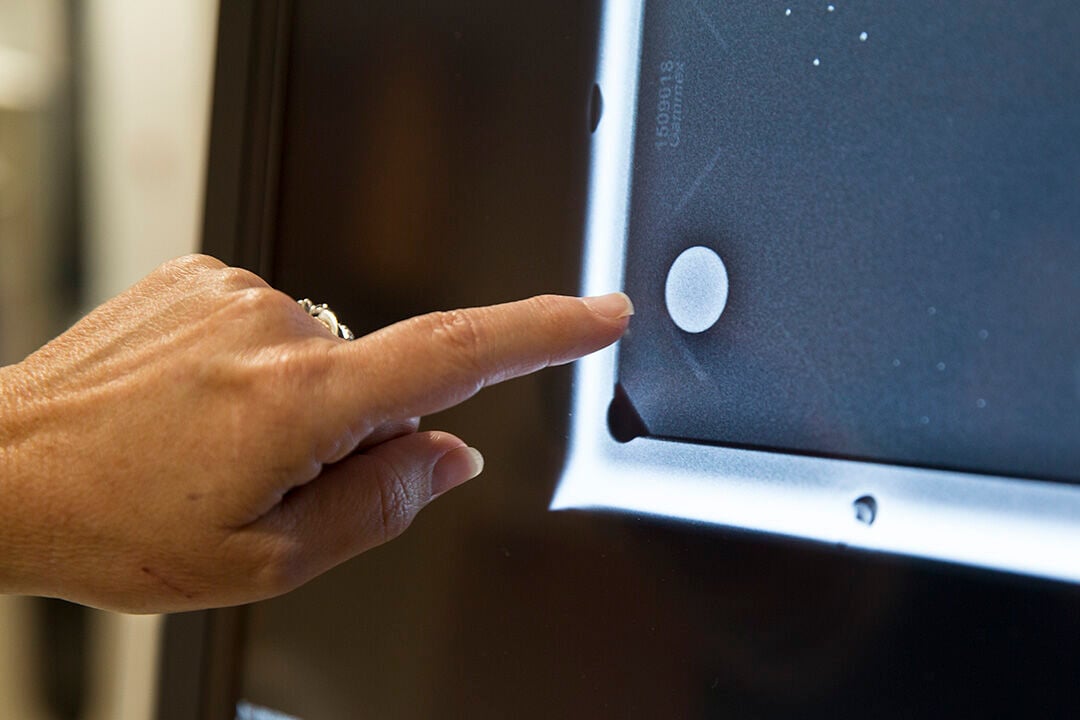 Mammography technologist Sherry Wollerman points to an example of a nodule after scanning phantom material at Resolute Health Hospital on Thursday, Oct. 15, 2020. Phantom material is an artificial sample used to make sure a machine can pick up images of small structures that are important to detect in the early stages of breast cancer. MIKALA COMPTON | Herald-Zeitung 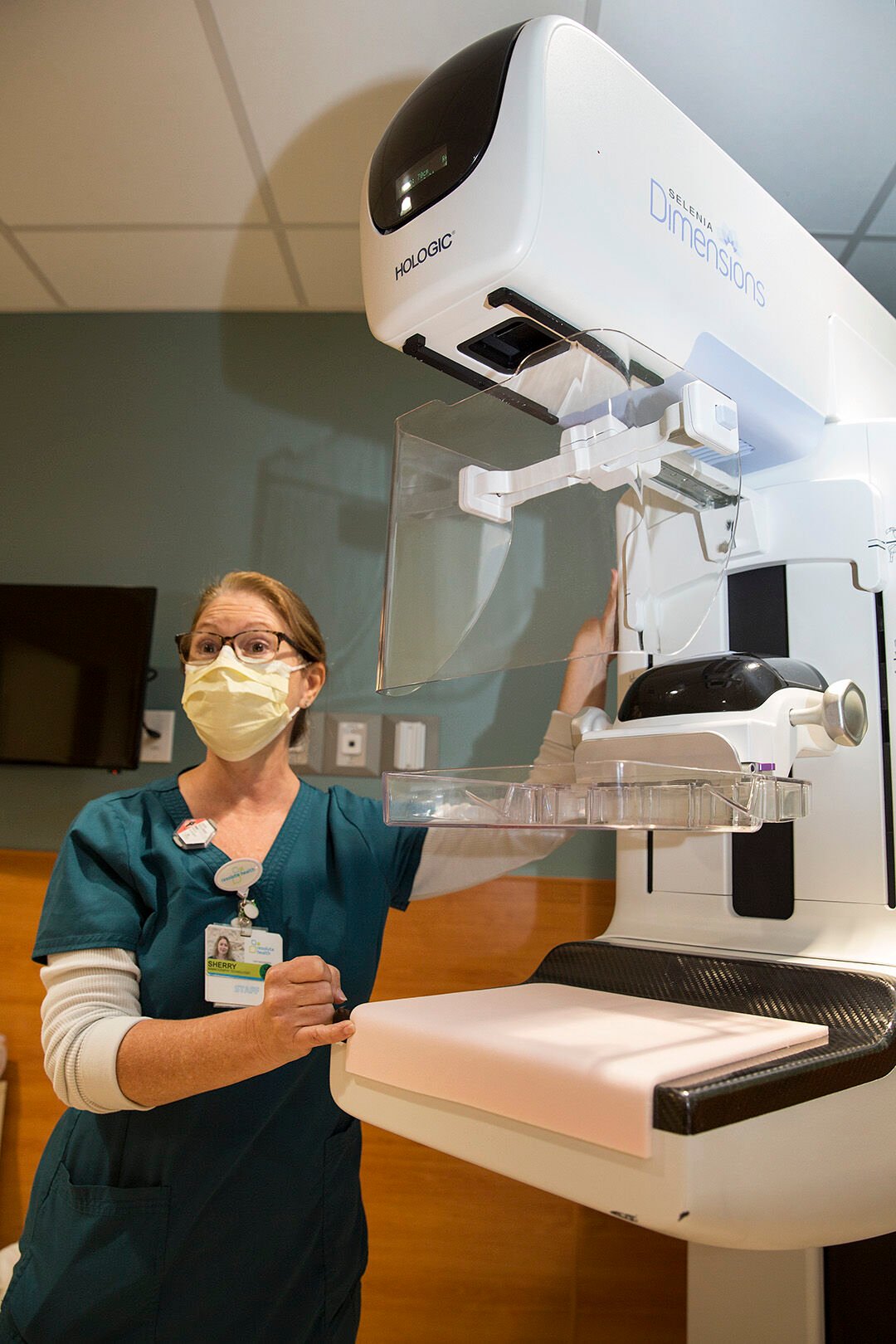 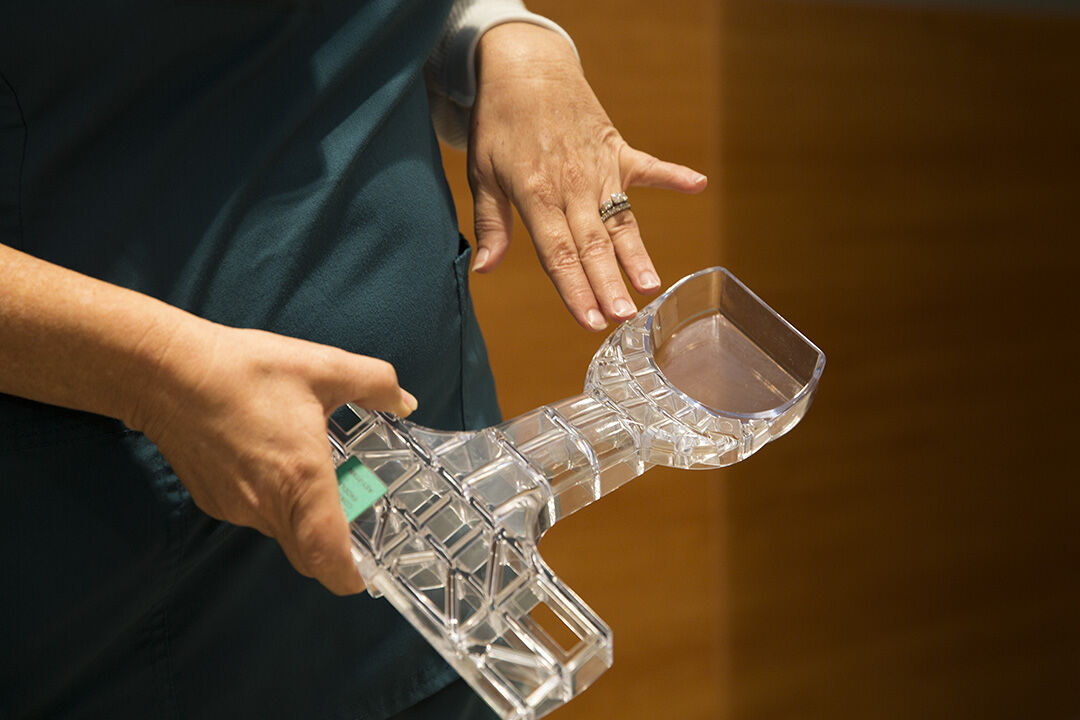 Mammography technologist Sherry Wollerman holds a compression paddle in the mammography suite at Resolute Health Hospital on Thursday, Oct. 15, 2020. The paddles are used to reposition breasts during the imaging process. MIKALA COMPTON | Herald-Zeitung 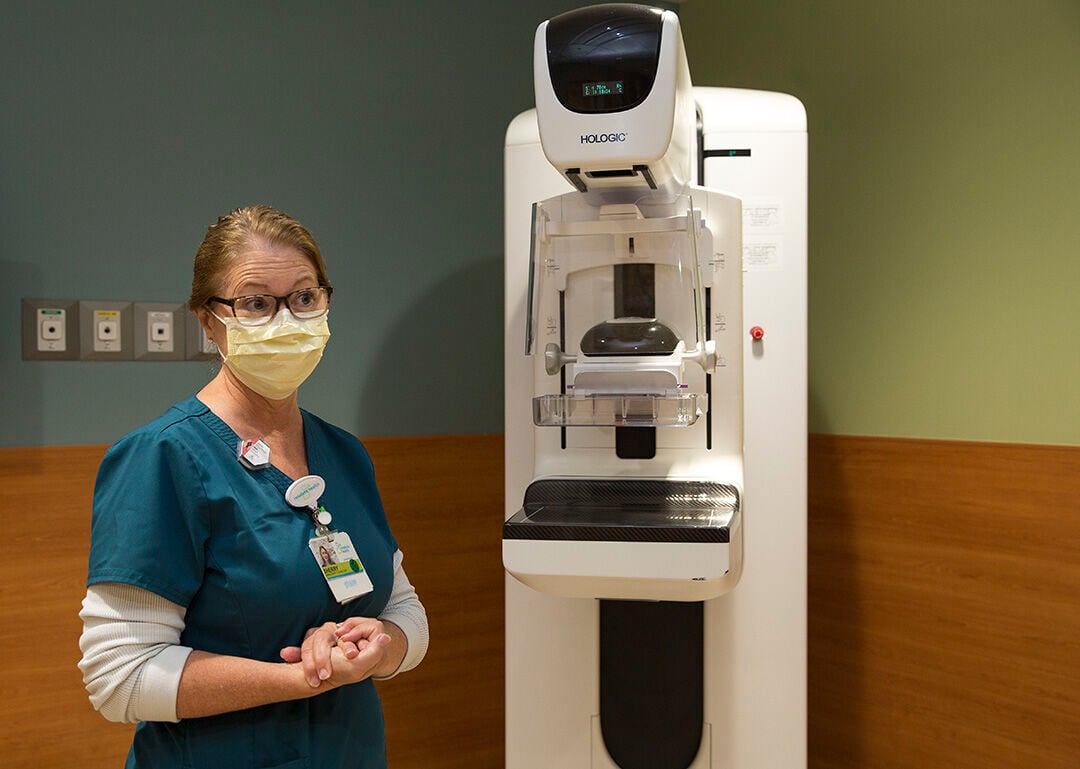 Mammography technologist Sherry Wollerman points to an example of a nodule after scanning phantom material at Resolute Health Hospital on Thursday, Oct. 15, 2020. Phantom material is an artificial sample used to make sure a machine can pick up images of small structures that are important to detect in the early stages of breast cancer. MIKALA COMPTON | Herald-Zeitung

Mammography technologist Sherry Wollerman holds a compression paddle in the mammography suite at Resolute Health Hospital on Thursday, Oct. 15, 2020. The paddles are used to reposition breasts during the imaging process. MIKALA COMPTON | Herald-Zeitung

Jen Reynolds was diagnosed in 2013 with stage 2 breast cancer at only 33. As one diagnosed with the disease at a relatively young age, she encourages people to get mammograms as early as possible.

Reynolds, now 40 and with terminal breast cancer, said it is much more painful and exhausting than people believe it is compared to other cancers.

“The most common misconception is that it’s the ‘easy’ cancer,” Reynolds said. “It’s not. You still have to go through chemo, still have to get our breasts cut off. With mastectomies, most women don’t want to deal with this again.”

In honor of Breast Cancer Awareness Month, Resolute Health Hospital extended its hours for mammograms. Hours are 8 a.m. to 8 p.m. throughout October.

If patients have prior images or their baseline mammogram — done at age 35 — with the hospital already, they should expect to see results within a day or two.

Sherry Wollerman, Resolute Health Hospital’s lead mammographer, said women should get a baseline mammogram from 35 to 40 and begin regular screenings at 40. If they have a first degree relative, such as a sister or mother, with breast cancer, they should get screened 10 years prior to the age the relative was diagnosed. For example, if a woman’s mother was diagnosed at 42, she should get examined at 32.

Wollerman said patients with previous screenings at different places should schedule an appointment about a week or two out to give the hospital time to request previous images and avoid unnecessary imaging.

“What can happen is the radiologist can request additional imaging that may be unnecessary when compared to prior images,” Wollerman said. “Doing so can cause the patient undue stress, anxiety and cost. We try to avoid that.”

Resolute Health Hospital uses a digital 3D mammogram, which takes images in 1 millimeter increments so the tissue is easier to see. These images are put together by a computer into a series of thin slices.

The machines used to be analog and then became digital. This increased the success of detecting breast cancer by 20%. Today’s 3D machines are 40% better at catching breast cancer than past film/screen technology.

During screenings, Wollerman will place a single-use foam pad on the bottom plastic plate which has a carbon fiber detector. The breast is compressed between the bottom and a top plastic plate.

“The radiologist will then look at the images. If there is anything questionable — it doesn’t have to be necessarily bad news — if he is just like, ‘You know, I’ll want a closer look at that,’ then you’ll come back.”

Based on those images, the radiologist will either recommend a routine mammogram, a six-month followup or in some cases, a biopsy.

“Our goal is to make this whole examination and experience the least uncomfortable — financially, physically and emotionally — as we can,” Wollerman said. “We want this to be something people don’t put off.”

Because the exam can be nerve-wracking, Wollerman suggests bringing friends and or family to get screened together, by making appointments on the same day around the same time. They can treat it as an social activity and go for lunch or coffee afterwards, Wollerman said.

Reynolds founded the Pink Warrior Advocates a year and a half after she was diagnosed. The organization serves New Braunfels, Austin, San Antonio and surrounding areas in the Hill Country providing physical and emotional support for breast cancer survivors.

The organization will pay for people’s copay for mammograms and other insurance costs when possible. It also provides chemo care kits, mastectomy bras and mastectomy kits, as well as group support.

Items include the mastectomy kit, which have a heart-shaped pillow made by volunteers and survivors. There is also a drain bag for drainage from long tubes inserted into the breast area or armpit to collect excess fluid in the space where the tumor was.

“The pillow is really great for after they have their mastectomy,” Reynolds said. “They put in between the seatbelt and their breasts on the way home. You can be laying in bed and it’s nice to rest your arms on it.”

“Obviously a lot of us are struggling and these women can’t get treatment if they can’t meet copays,” Reynolds said. “This is a matter of life and death. They shouldn’t have to choose between a roof over their kids’ head or go get treatments for breast cancer.”

Reynolds said she stresses help for survivors under 40, who have about a 5% likelihood of getting breast cancer, according to the 5 Under 40 Foundation.

“We have so many women under age 40 and one of them is 21,” Reynolds said. “She got diagnosed and she was late stage three, so just about stage four.”

Breast cancer can be cured in stages one through three, but at stage three the cancer travels outside the breast and can be harder to cure and may grow back. Stage four breast cancer is when it spreads to other areas of the body and is the deadliest.

Reynolds stressed getting a mammogram as early as possible to prevent future costs and stress later on.

“We know it’s scary but it’s better to find it early rather than later, before it spreads in the body and it’s terminal,” Reynolds said. “It’s definitely tough knowing you have something like that but you just have to keep fighting and trust your doctors.”

The imaging center at Resolute Health Hospital is offering extended hours during Breast Cancer Awareness Month to make it easier for women, es…