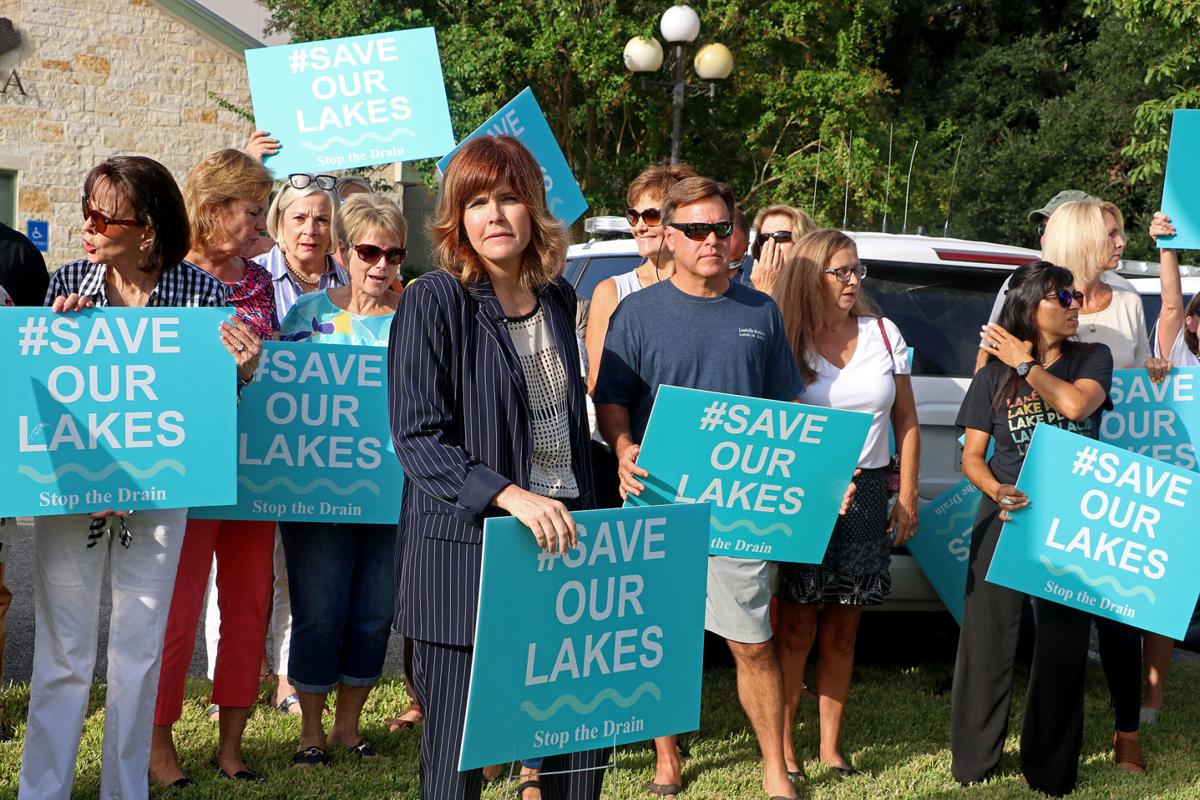 Members of the Save Our Lakes community coalition gather outside the Guadalupe-Blanco River Authority monthly meeting as volunteer Tess Coody-Anders prepares to address the media Wednesday Aug. 21, 2019, at the GBRA annex building in Seguin. 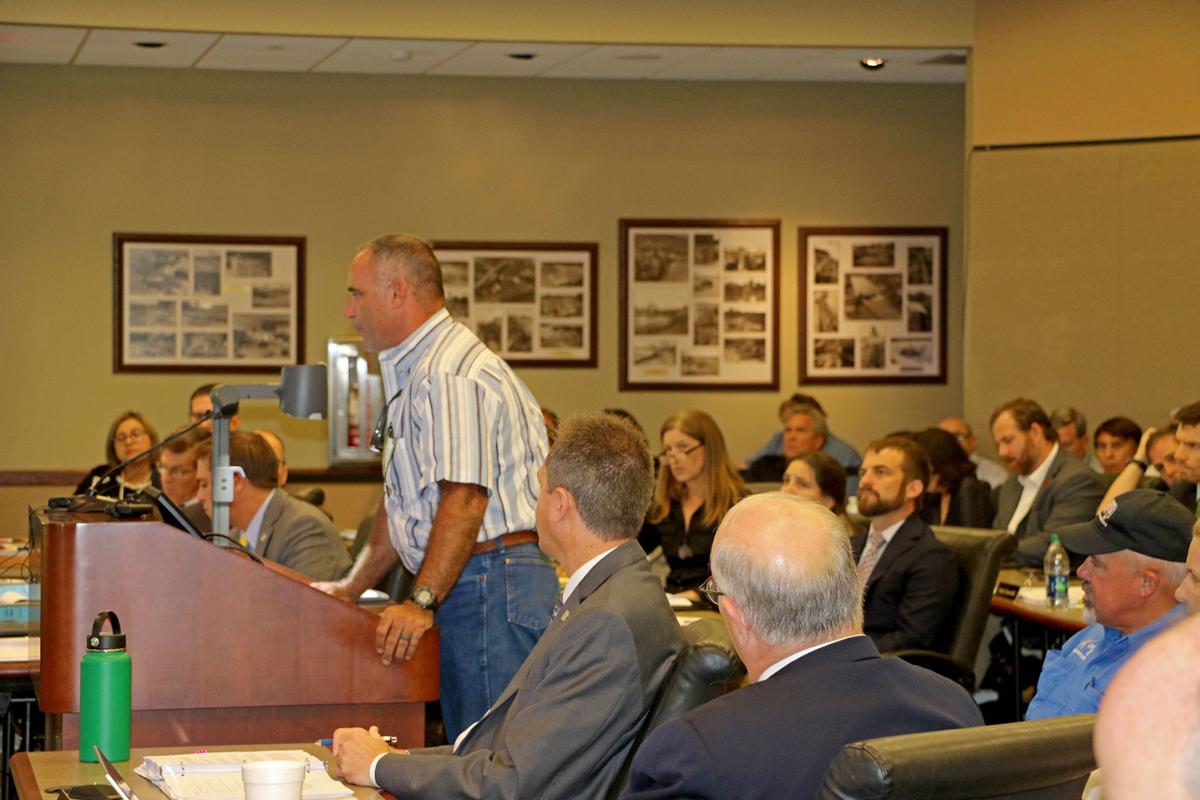 Concerned citizen Tim Bays addresses the GBRA board of directors at their monthly meeting Wednesday Aug. 21, 2019, at the GBRA annex building in Seguin. 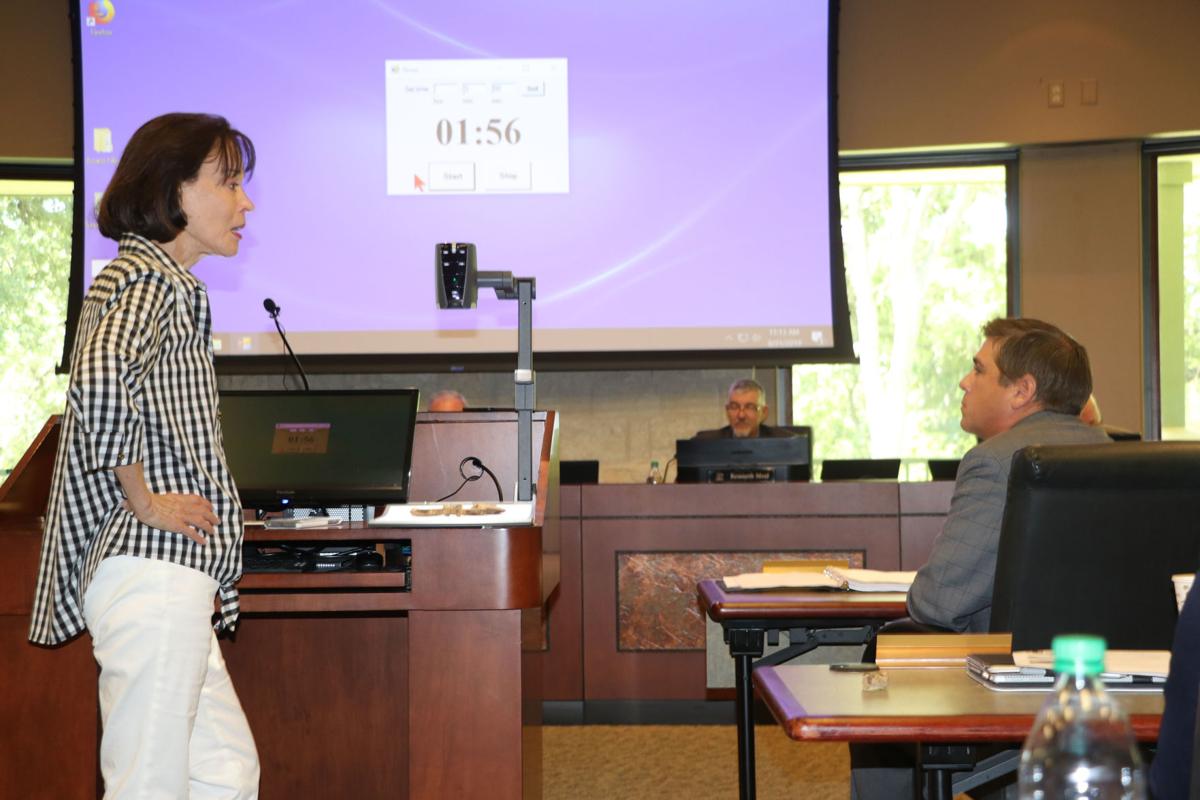 Resident Diane Roberts shares her concern and ire directly with GBRA CEO Kevin Patteson Wednesday Aug. 21, 2019, at the GBRA board of directors meeting in the authority’s annex building.

Members of the Save Our Lakes community coalition gather outside the Guadalupe-Blanco River Authority monthly meeting as volunteer Tess Coody-Anders prepares to address the media Wednesday Aug. 21, 2019, at the GBRA annex building in Seguin.

Concerned citizen Tim Bays addresses the GBRA board of directors at their monthly meeting Wednesday Aug. 21, 2019, at the GBRA annex building in Seguin.

Resident Diane Roberts shares her concern and ire directly with GBRA CEO Kevin Patteson Wednesday Aug. 21, 2019, at the GBRA board of directors meeting in the authority’s annex building.

A visiting judge on Wednesday ordered the Guadalupe-Blanco River Authority, at least for the time being, to stall its plans to begin dewatering all of the lakes in its Guadalupe Valley system.

The measure is only in place to give Steve Ables — presiding judge in the 6th Administrative Judicial Region — time to hear the merits of and decide on petitions for a temporary injunction and a temporary restraining order two sets of plaintiffs recently filed against the authority in the 25th District Court.

Ables began hearing attorneys’ arguments on why the river authority should or should not be forced to put off the plan to drain lakes McQueeney, Placid, Gonzales and Meadow Lake. GBRA officials have said the plan is necessary for safety reasons.

Ables, for the sake of Wednesday’s hearing, grouped the two legal filings together. Last week, Ricardo Cedillo filed for an injunction on behalf of 10 property owners along McQueeney and Placid. On the same day, attorney Douglas Sutter filed an application for a restraining order with nearly 300 plaintiffs from all of GBRA’s lakes.

GBRA’s plan was to begin the dewatering process on Monday.

Ables’ temporary ruling on Wednesday is not the big win but only a temporary measure, Cedillo said.

“The court is issuing a restraining order so nothing happens Monday because we’re in court,” he said. “Nothing is going to happen Monday, maybe Tuesday if we’re still in court. No draining is going to continue until we get a decision.”

The river authority has said emptying the lakes is necessary for safety reasons. The plan is to start with Lake Gonzales, then move to Meadow Lake, followed by Lake Placid and end with the dewatering of Lake McQueeney.

Officials have said each lake will take about three days to empty and all should be drained by the end of this month. Safety concerns heightened after a spill gate failure in 2016 on Lake Wood and one in May at Lake Dunlap, GBRA General Manager/CEO Kevin Patteson has said.

“The emergency they are stating is largely manufactured,” Cedillo said during his opening statement. “No one is here to say safety is not a concern.”

The river authority had made up its mind years ago to eventually get out of the hydro-electric business, which is why the dams that create the lakes were built, Sutter said in his opening statement. Then officials began to point toward safety concerns to justify their lack of attention paid to the dams, he said.

Cedillo’s first witness seemed to corroborate by making scathing allegations against GBRA from the stand. James Lee Murphy III was the witness.

He said he is the former second in command at GBRA, only leaving his position after the board chose Patteson to run the company about three years ago.

While he was still there, the water authority noticed that hydro-electricity was losing money and some decided that focusing more on selling water would be more lucrative. A decision had to be made about what to do with the dams.

While those talks were under way, a then-young protégé of his floated an idea, Murphy said.

“‘Well, let’s let the dams fail,’” he recalled a younger Charlie Hickman saying. Hickman is the executive manager of engineering at the Guadalupe-Blanco River Authority.

Murphy laughed at the idea, he said. Later he came up with a plan of his own to help fund the hydro-electric arm of the business and pay for maintenance and repairs at the aging dams.

“I decided that we needed to preserve these lakes,” Murphy said. “They have a unique recreational value to a region that has no resources.”

Under cross examination, Murphy told the attorney for the defendants, Lamont Jefferson of San Antonio, that it was Murphy, before he left, who promoted Hickman.

Before Patteson was chosen to run the authority, Murphy wanted the job, he also told Jefferson from the stand.

That firing meant, Murphy conceded, that he was not in place when leadership got the final report on the safety of the dams from outside engineers contracted to study the system.

Plaintiffs called several witnesses before Ables recessed the proceedings just before 6 p.m. Wednesday. He ordered that the parties return next week.

The hearing is scheduled to recommence at 10 a.m. Monday in courtroom 201. Attorneys have said they may need that day and possibly more to finish putting on witnesses and arguing their sides.

The wildlife that depends on the lake is also Threatened...

Water Wells are at High Risk

Its always about the money..

We have been paying taxes to GBRA to do a job..When people are incompetent on the job ..Their services are no longer needed...and Many people feels GBRA has been incompetent and have failed the TAXPAYER.they've had years & millions of Dollars to do their job ie: Take care of the lakes & dams...

THEY'VE FAIL Their Employers ..We the people who Signs their Paycheck .

Finally We should not have to be the losers because They Failed doing their Job...Fire them & let's get a new Board who Actually has their Employers best interest..not their own Agenda...