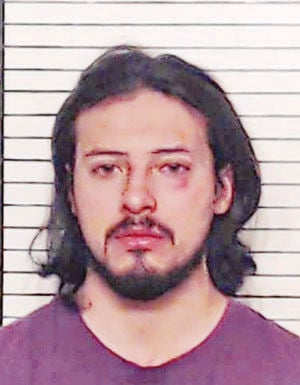 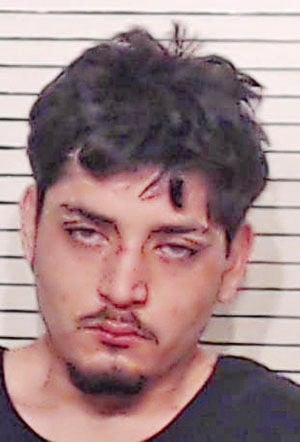 Two New Braunfels men stopped while walking down a street — with one openly possessing a rifle — subsequently scuffled with police officers, resulting in their arrests Sunday night, police said.

“An officer on patrol saw two male suspects walking down the street,” he said. “One had a red bandana covering his face and holding what appeared to be a rifle. While making contact with them, the man holding the rifle told the officer it was a BB gun and ultimately threw it into a nearby yard.”

Ferguson said as more officers arrived on the scene, both subjects “became argumentative and despite repeated commands, both refused to follow orders.”

“One was reaching into his pockets and fiddling around his waistband area,” Ferguson said, adding both refused when ordered to drop to their knees.

“One of them had a large, Bowie-style knife in a sheath on his waistband,” he added. “He continued to be argumentative and challenged officers.”

One walked away, down Mill Street, as officers tried to detain the other suspect, Ferguson said.

“Officers tried to perform a physical take down to position one suspect for handcuffing when the other suspect, who had walked two or three houses down the street, came back and shoved the officer trying to place the other subject in handcuffs,” Ferguson said.

More officers arrived, one using a taser to subdue the suspect intervening in the other’s arrest, Ferguson said.

Both were searched, with a small handgun found on one suspect and a small amount of marijuana found on the other, he added.

Both were taken to Comal County Jail.

Zacharia Renee Amaro, 19, was charged with unlawfully carrying a weapon, evading arrest or detention, resisting arrest, search and/or transport, and interfering with public duties of an officer.

Orlando Rico, 22, was charged with resisting, marijuana possession under two ounces and assault of a peace officer.

Both remained in the county lockup Monday afternoon, with Amaro under $11,000 bond and Rico under $6,250 bond.