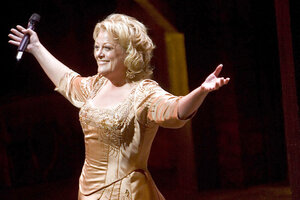 Deborah Voigt was in California earlier this week when she got a text from a friend on the East Coast.

"So sorry to hear the news of your passing," read the Monday message.

The Gazzetta di Parma newspaper in Italy had run an obituary of Mirella Freni, the great Italian soprano who died Sunday at age 84. It was accompanied by a large photo that filled more than half the page — of Voigt.

"It's pretty shocking, I have to say, and kind of inexcusable that they would make such an error," Voigt said during an interview with The Associated Press. "But they did. And these things happen, I guess."

A 59-year-old American soprano who grew up outside Chicago, Voigt knew when the photo was taken because she recognized the gold-colored dress. It was shot on May 20, 2006, at the Metropolitan Opera House in New York at the start of a gala honoring Joseph Volpe, who was retiring as general manager after 42 seasons with the company.

That was the only time Voigt ever saw Freni. After a gala five days earlier at the Met that was her unbilled final performance, Freni delivered a spoken tribute at the Volpe gala.

"I don't remember ever interacting with her in any way," Voigt said. "She was just such an operatic icon and star that you kind of looked at her in awe."

Opera stars take pride that they sing complicated music without amplification but the photo showed Voigt with a wireless microphone because she was performing Ben Moore's “We're Very Concerned,” a humorous take on Volpe composed for the occasion.

"Of all the pictures to pick, not only the wrong one, but also an opera singer with a microphone in her hand?" Voigt said. "I mean, come on, really?"

Gazzetta di Parma ran a correction to the gaffe.

"Many of you called: and you are correct," the paper wrote. “We apologize to you and to all of our readers. Due to an error that pains us, in yesterday's paper regarding the death of Mirella Freni the wrong photo was published. ... This image unfortunately was associated years ago in our archive with the name of Mirella Freni. We know and appreciate the great, sincere passions of those who follow and love the great divas.”

"I hope it won't happen to me when I die," she said. “Although I guess I could think about whose picture would I want them to replace me with? We'll see who's around when I'm 85 and gone.”