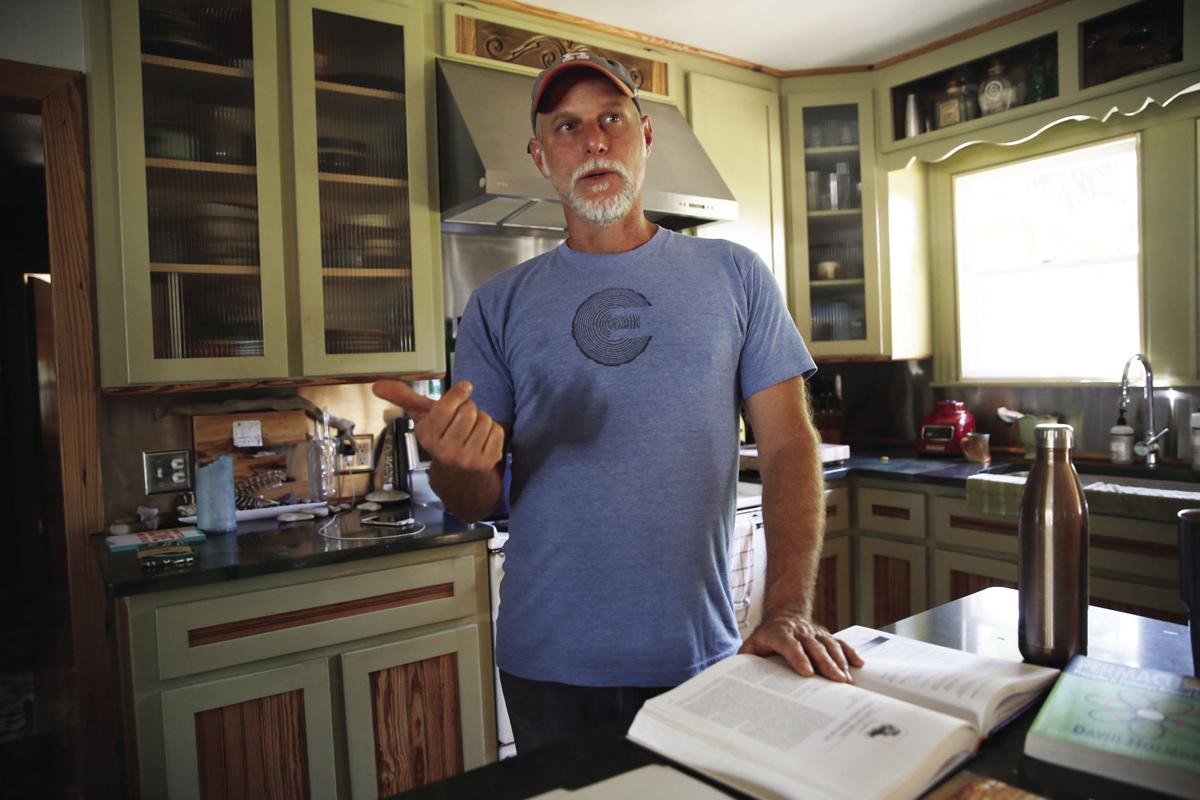 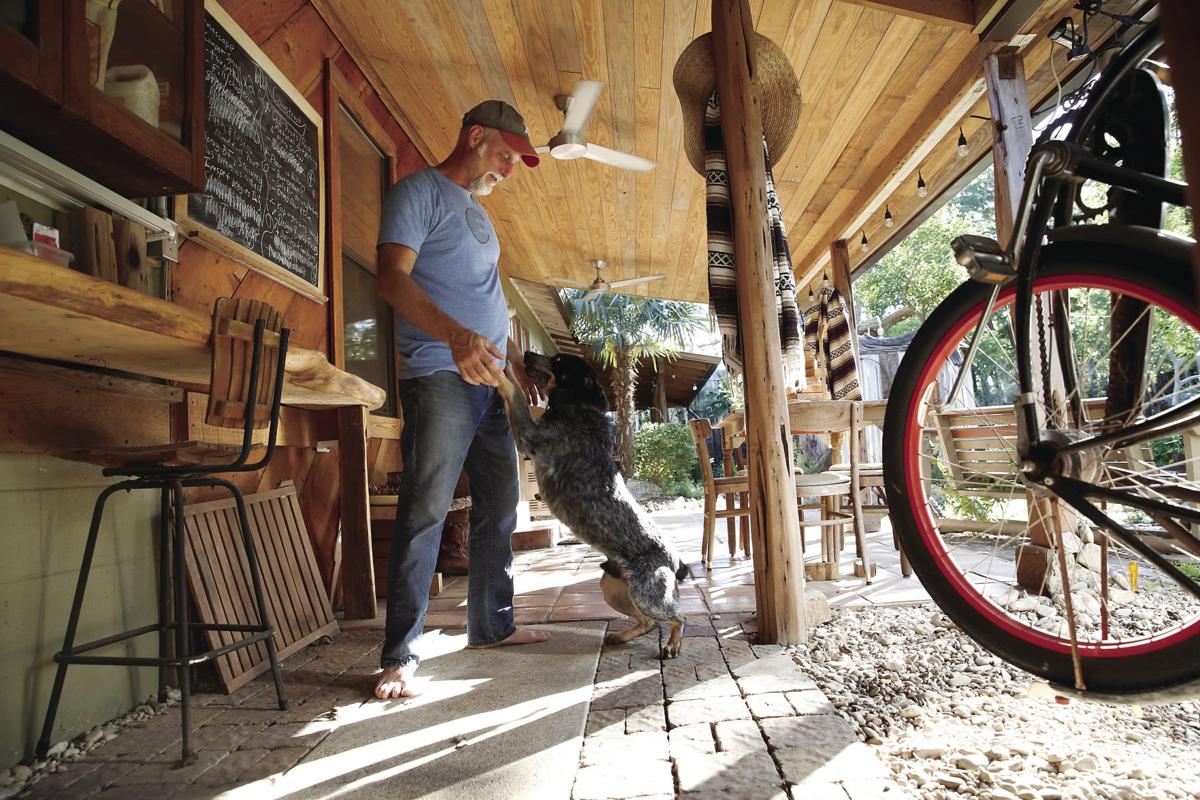 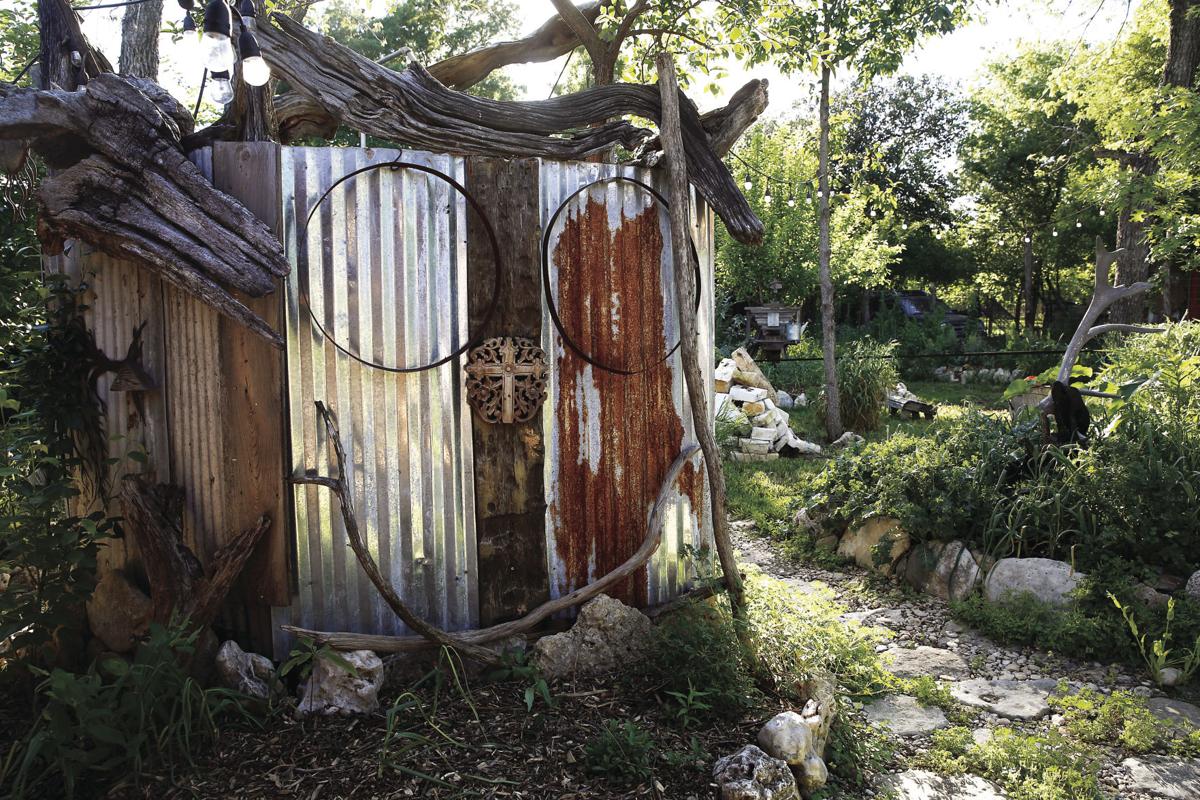 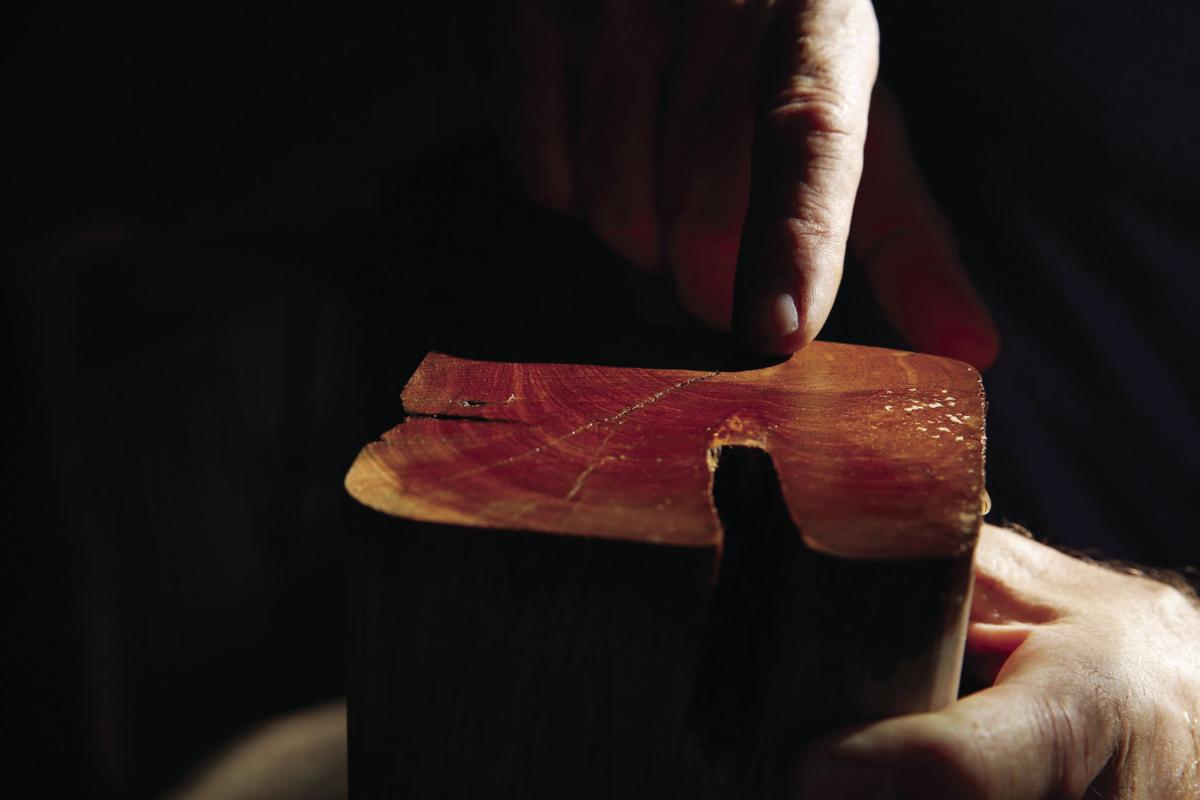 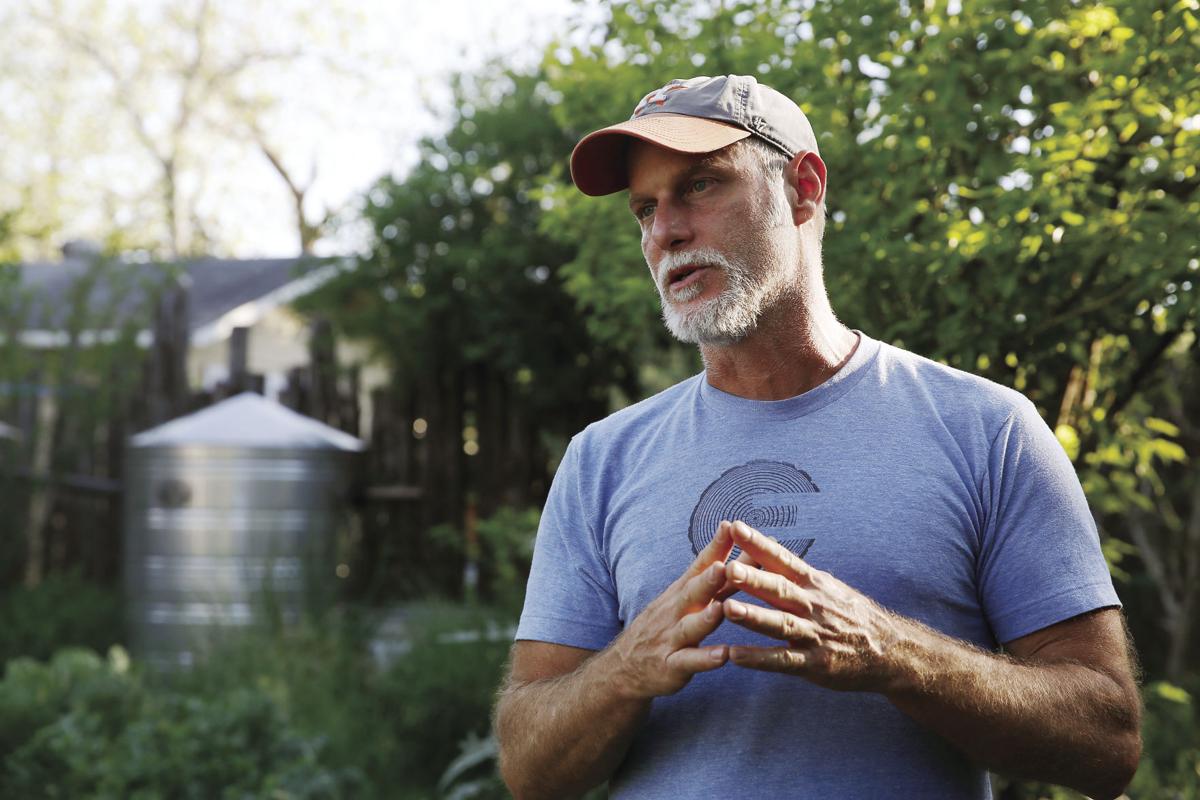 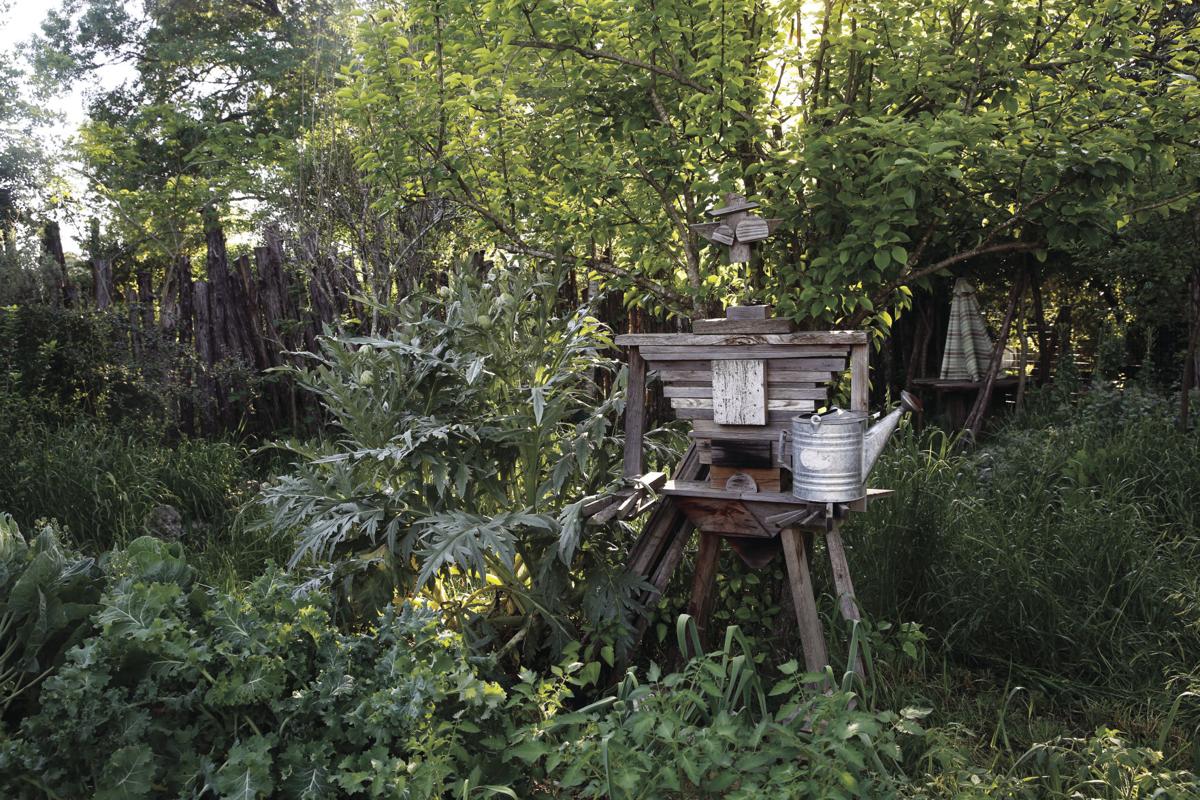 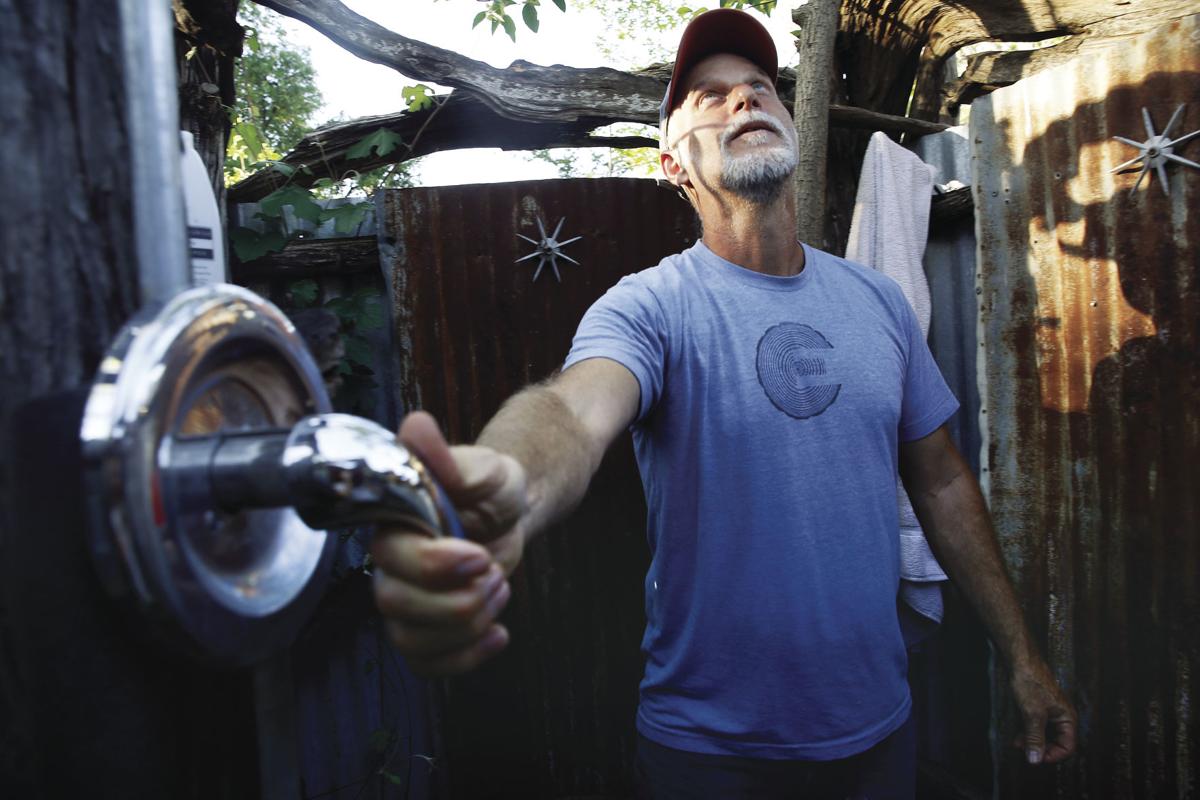 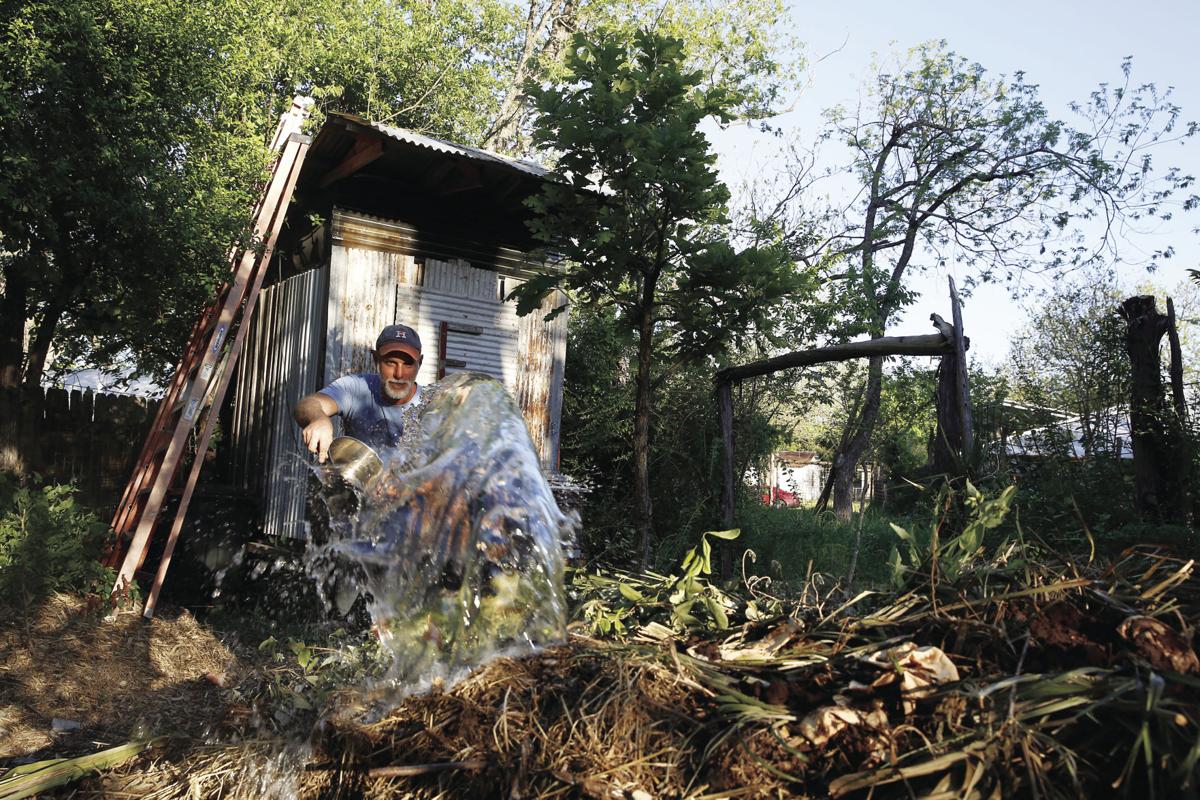 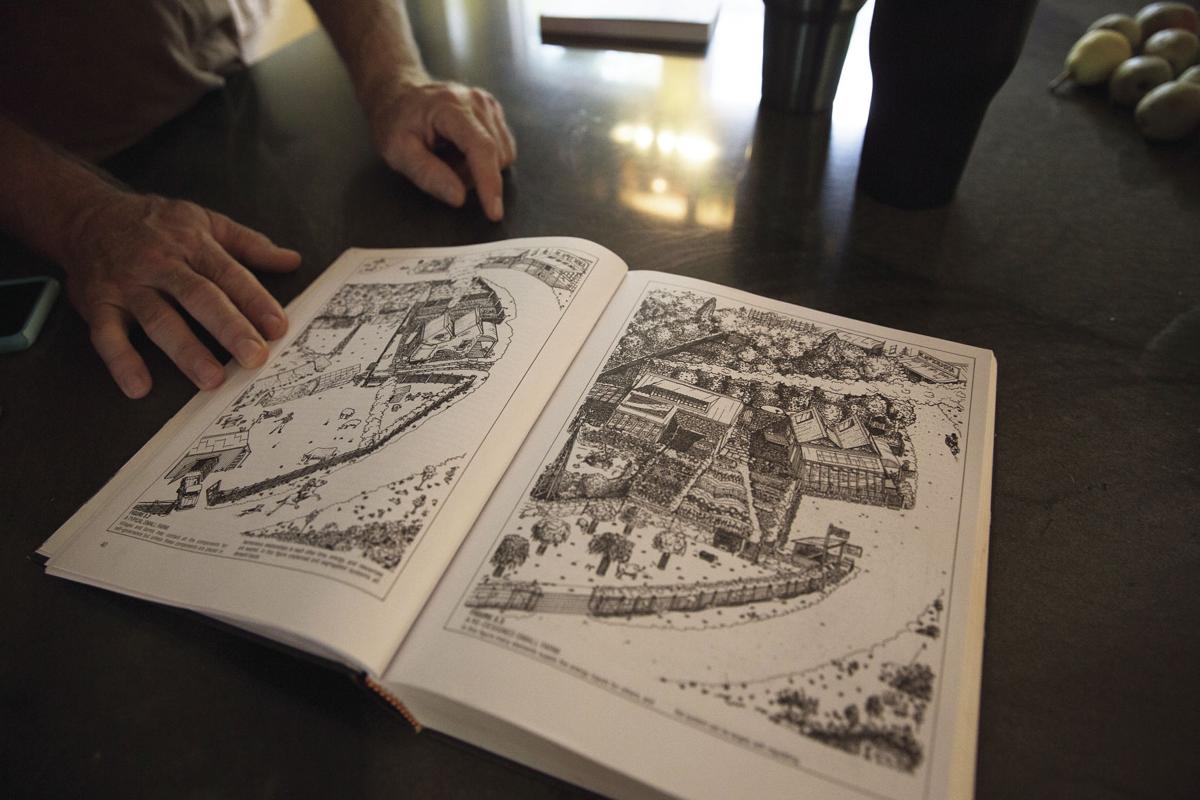 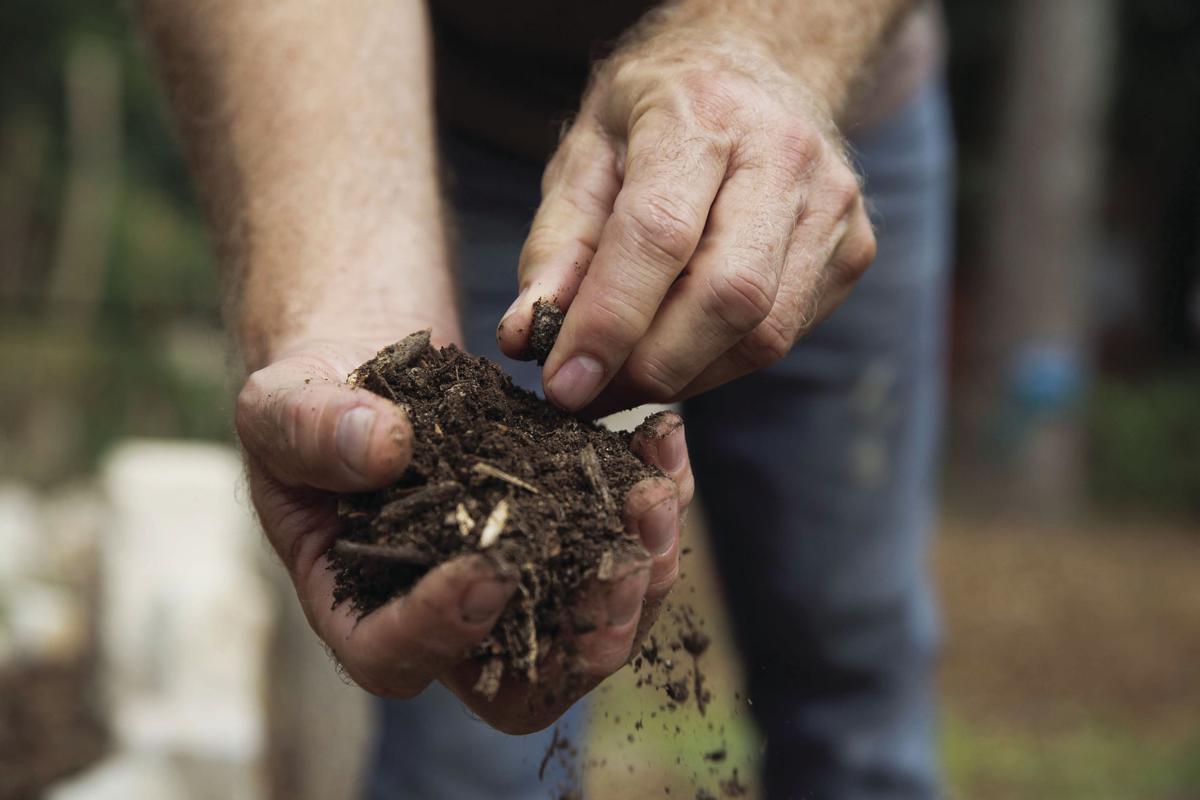 At the highest point between the Guadalupe and Comal Rivers, in an area once known to settlers as Comal Town, Woody Welch, executive creative director of Earth Repair Corps, is working to sustainably restore health to the earth of his property.

The process is slow-going, but Woody is comfortable with that, explaining that nature doesn’t understand time the same way people do. Nature doesn’t punch a timecard; it doesn’t follow a 12-month calendar.

“Each of us only has 100 years, at most, if we’re lucky,” he said. “Mother Nature was here long before us, and she’ll be here long after us, and it’s up to us to make sure she stays healthy for future generations.”

Concern for future generations — specifically, for his daughter, Edie — is what started Woody down the path of permaculture several years ago.

“I looked at her and I thought, ‘What is the earth going to be like for her when she’s grown? What will be left?’” he said. “The way we’ve been doing things is not sustainable and there are signs of that everywhere that we’re not paying attention to. I’m not pointing fingers. We all use fossil fuels — I used to be a grease monkey — and it’s not a partisan issue. We have to take care of the earth so it will be a good place for our children and grandchildren to live.”

During the eight or so years that Woody has owned his home on Gruene Road, it and the property it sits on have undergone a massive transformation — so much so that it’s almost unrecognizable from the way it looked before. At that time, it was a simple, white, one-story house surrounded by a tidy grass lawn — all very run-of-the-mill and inconspicuous in a neighborhood full of similarly neat and prim homes.

Today, it stands out from the crowd. The entirety of its once monoculture lawn is now a lush oasis of purposefully placed trees and plants. Most are human edible; some are intended to feed the range of critters that make Woody’s land thrive. Bees, butterflies, leafcutter ants, birds — even webworms and wasps — all play a role in the cycle of life he cultivates.

“When there is too much or too little of something, nature sends something to fill the gap and restore balance,” Woody said. “If I kill all the wasps, the webworms take over, but if I leave the wasps, they feed on the webworms and keep them in check. I don’t need to interfere.”

Nestled within the orange, pecan, elderberry and pear trees, the bones of the once nondescript home are still visible. However, it, too, has been revived into something marvelous, a small palace of reclaimed architectural elements.

“I wanted to replace the worst with the best,” Woody said, explaining the home had been damaged by both the 1998 and 2002 floods and needed a considerable amount of work when he bought it.

By building relationships with people in and around New Braunfels and having a keen eye and ear for demolition, Woody has turned the house into a home flavored with Hill Country heritage. Large river rocks form the front porch and pathways. Placed diagonally, the planks of a demolished privacy fence covering one wall of his living area give the open floor plan a cozy, artistic vibe. Reclaimed cabinets fill the kitchen.

When an arsonist burned an 1850s German home in his neighborhood and Woody saw its surviving wooden posts were slated for demolition, he asked to have them and spent days removing nails and planing them by hand.

“You know you can count the rings to tell the age of a tree — look at these rings,” he said, holding out a cross-section of one of the posts, which had dozens of rings tightly packed into the compact space. “These posts were made from trees that were more than 100 years old, and because of the way the rings are, you can tell these trees grew tall and thin, which means they were in a thick forest.”

Because people in the 1850s used the resources they had readily available, Woody said the posts show that there was once a thick forest of trees somewhere nearby — difficult to imagine in a region now covered in rock and caliche, cacti and cedars.

The posts have a new purpose, now, supporting the overhangs of his porches. One post short of having enough to surround the entire house, a lone felled pecan “hero post” fills the gap.

Woody acknowledged that he could have saved himself a lot of time and work by going to the store to buy the items to remodel his home.

He explained preservation — reclaiming, mending, repurposing — plays a big role in living a sustainable lifestyle, by keeping items out of the landfill and limiting the use of resources required to create new items.

“We aren’t paying the actual cost for goods,” he said. “What we’re not paying for in cash we’re paying for with our health and the earth’s health.”

Give and let give

Embracing permaculture means Woody takes advantage of what nature gives him — water, sunlight, wind, food and the strength of his own body — while also gifting nature with his care and protection. It forms a cycle of give-and-take in which both he and the earth benefit.

The rain barrels on his property are one example. Within them, 6,000 gallons of rainwater can be stored, reducing the amount of runoff to the Guadalupe River near his property during the rainy seasons, while also providing him with water he can use throughout the drier seasons to water his garden or even take a quick shower in his backyard.

“Feel how soft this water is,” he said, running his fingers through a trough of rainwater. “There’s no chlorine in it, no chemicals, no minerals. Just water, and the plants love it.”

Fruit and vegetable scraps, leaves, leftover dishwater are thrown into a pile in a far corner of the double lot yard, where the compost “cooks” at 130 degrees as it breaks down. When it’s ready, he adds it back into the soil around his plants.

Woody aims to restore the kind of balance the soil naturally would have had before people settled on it, when vegetation, leaves and fallen twigs mixed with the manure of bugs and animals to create a recipe for abundant life.

Along with the compost, he adds thick layers of mulch to keep the soil cooler, retain moisture and enrich the soil.

“I’ve developed a keen ear for the sound of wood chippers,” he said, grinning. “When I hear one in the neighborhood, I go over and ask if they’d like to dump the mulch in my yard. It saves them from having to drive out to the county and saves me from having to drive out to pick it up. I’ve had probably 30 or more mulch deliveries like that here in the last eight years.”

Woody also takes advantage of the solar energy that freely drenches the roof of his home. Solar panels placed atop his garage turn the sunlight into fuel for the Tesla that charges within it, eliminating the need to drain the earth of its fossil fuels.

To the uneducated eye, Woody’s landscape might appear a bit… chaotic. Those accustomed to vegetable gardens planted in evenly spaced, parallel rows bordered with neatly mown grass and tidily clipped hedges might find his winding pathways, unruly cover crops and plants allowed to go to seed alarming. Between the pear and Rose of Sharon trees, artichokes, tomatoes, brussel sprouts and borage grow in round, rock-ringed beds piled high with compost and mulch. Here and there stand sculptures Woody has made from board scraps and end pieces. In a corner far from the house, weeds huddle in a sunken, shady area, and through the center of the yard, a slackline hangs between two trees, where Woody practices his tightrope-walking skills.

Though it doesn’t have the traditional garden look most people know, each area and each plant in Woody’s yard serves a purpose. The entire property is planned according to a multi-layered flow map and stacking functions. Flow maps in permaculture show the natural course of water, wind, sunlight and human foot traffic, overlain on the land’s topography.

“You’re looking for the path of least resistance, because that’s the path that nature takes,” Woody said. “And, you plan for your own convenience. You put the vegetable garden near the kitchen to save the extra steps. It might only be five steps closer, but if it saves you five steps every time you go to or from the garden, it adds up.”

Originally, the path of least resistance led rainwater to run underneath the house, which caused a plethora of problems. Woody had it graded so land slopes away from the house, and the water flows down winding rock paths to the aforementioned sunken corner, which he calls his rain garden. Trees and a shade cloth over the driveway help keep the house cool.

As the warm-weather crops die off they are replaced with plants better suited to the Hill Country’s mild winters. Broccoli, turnips, onions and cabbage take their places in the beds, ensuring fresh, nourishing food is always within arm’s reach — the healthy soil growing healthy plants supporting a healthy human creating a healthier planet.

Dip your toe into permaculture:

Permaculture: The development of agricultural ecosystems intended to be sustainable and self-sufficient.