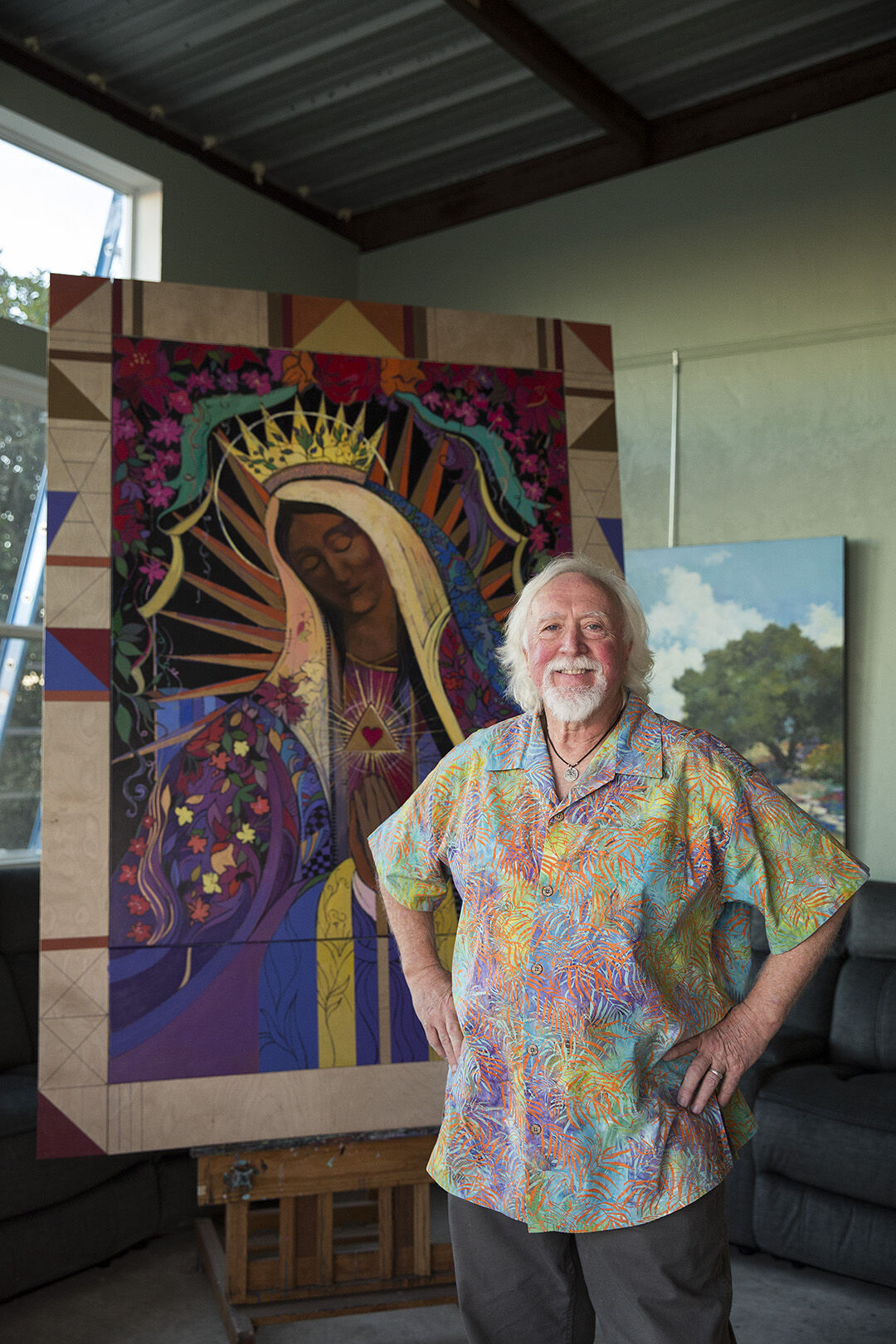 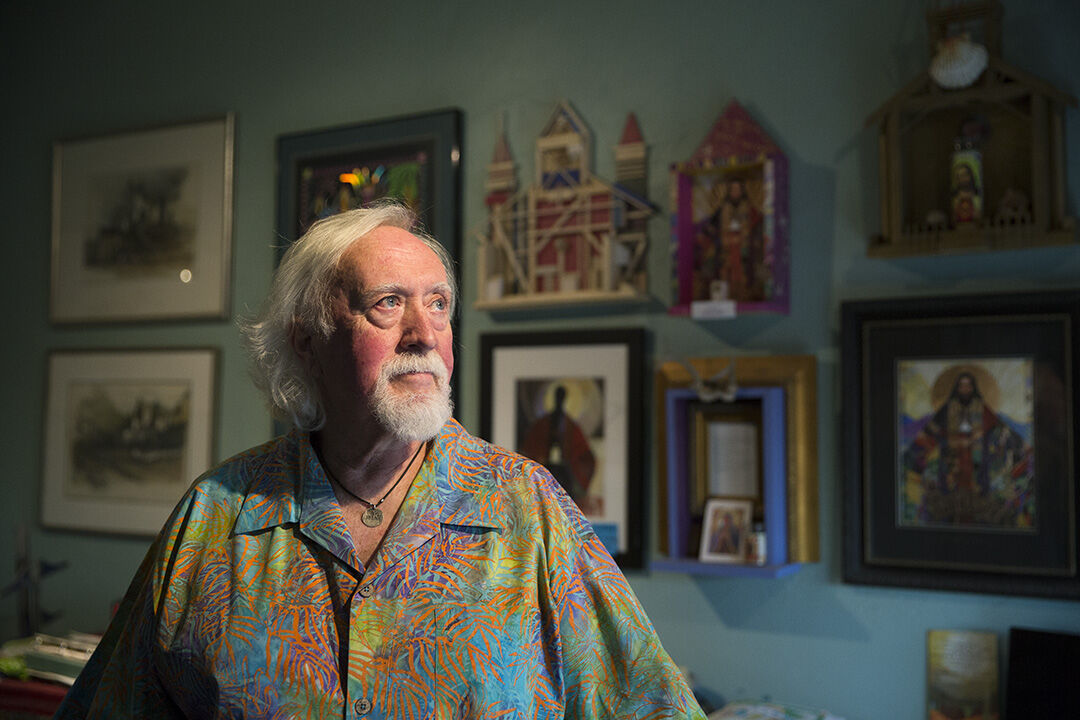 Imagine waking up each morning confident that whatever you can dream will find its way to you.

A trip to Italy? Mark your calendar.

A new business opportunity? The phone will ring.

In Thom Ricks’ serendipitous world, life is a beautiful playground of unlimited possibilities just waiting to be claimed — and it can be that way for anyone, he says.

Ricks wasn’t sure how to become a full-time artist/illustrator when he earned his degree in fine arts from the University of Texas at Austin.

“I graduated Saturday night and I thought, ‘Gosh, you know, I think I’d like to do this for a living,’ and I’ve been self-employed ever since,” he chuckled. “That’s the short story.”

While Ricks was studying at UT, renowned illustrator John Groth was working on a book there as an artist in residence, and Ricks was impressed by his lifestyle — Groth traveled all over the world working as an illustrator.

Inspired, Ricks bought a French easel — a compact, collapsible, portable wooden easel — as a graduation present to himself.

“I thought, ‘Man, I would love to do that,’ and I think now I’ve made 36 or 37 trips around the world,” Ricks said. “You can see on this little easel all the trips marked, almost like a notch in somebody’s belt. To me, traveling — whether it’s Egypt or Turkey or Greece or New Zealand or anywhere in the United States -— is one of the things that I cherish the most. You get to see and experience a new culture with fresh eyes, and I get to try to capture the essence of what I’m experiencing. No matter where I am, it’s the same thing, I’m capturing the essence, whether it’s Gruene or San Antonio or the Madonna. That’s what excites me.”

Ricks had been working as a freelance illustrator for about 25 years when the profession made a sudden shift. With the arrival of computers, illustration turned digital.

“Almost all the illustration work went away,” Ricks said. “Other illustrators and I had already been painting on the easel — we just kept painting, but we were now considered artists, as opposed to illustrators. But to some degree, I would still consider myself an illustrator because almost all of my work sort of tells a story.”

Ricks began selling his paintings and giclée prints at art shows and festivals, which blossomed into a successful career — he has spent the last 48 years as a self-employed artist.

When the coronavirus pandemic arrived in early 2020, Ricks once again found himself in a potentially precarious position. He was in France and was supposed to remain there for 11 more days when his wife, Jodi Stauffer, called to warn him travel to the U.S. would soon be banned. He flew home just hours before the ban was put in place.

Once at home, he faced a new challenge.

“All the big shows were canceled,” he said. “The spring — April and May — is my biggest show season, and then there’s the fall, October and November. For a little while it was just a free-fall, it was kind of a shock. Everything that I had counted on was gone.”

Even canvasses became scarce to impossible to find.

Ricks recalled the recession of 2008, another time when his profession faced challenges that he overcame. Soon he began to reevaluate his situation and ask, “How do you function in a new normal?”

Deprived of canvasses, Ricks looked for another surface option and landed on wooden panels.

He also took the opportunity to start playing with abstract paintings, an artistic style he’d never given much thought to before.

“I thought, ‘You know, if I were to create for the joy of creating, without any salable audience, what would I do?’” he said. “So I began playing. And I think I’ve sold every one of those pieces. I was kind of shocked, because I’ve never considered myself an abstractionist, but I was playing with creativity and actually ended up doing quite well.”

Though the style is different from what he’s used to, Ricks honed in on the compositional aspects of the abstract paintings, paying attention to weight, color, line, flow, etc. and focused on channeling creative energy into the paintings. With low pressure and no expectations, he was able to paint for fun, rather than for the end goal of selling.

When Gruene Market Days reopened in May, Ricks signed up for a booth, and it has been his primary showing spot ever since. He also spent a month during the summer in Colorado selling at two shows.

All-in-all, though the pandemic has posed a unique and unexpected challenge, it has not been insurmountable.

“All the bills are paid, everything is handled, Jodi and I are doing quite well, we’re remodeling the studio, and it’s all functioned well in this new normal,” he said.

An artist’s way of thinking

Part of Ricks’ dream-oriented, confident mindset can be attributed to Julia Cameron’s well-known book, The Artist’s Way — A Spiritual Path to Higher Creativity, which is arranged as a course to teach people techniques and exercises to build their creative confidence and, as Ricks put it, “create in service to a higher power.” He has completed the course annually for the last 25 years or so, and is currently working online with one Artist’s Way group in France and another in Dallas.

“That’s helped me keep my sanity and not panic thinking, ‘Oh my god, what am I going to do,’” he said. “Every morning I read this and, as best as I know how, surrender and create in service to god, goddess, the universe — whatever you want to call it, I have several names — and it’s been phenomenal.”

Discouragement is part of the business, Ricks said, but he’s never been discouraged to the point of devastation.

He also recognizes many people deal with “external doubters.”

“People who say they love you start saying things like, ‘Maybe you should get a real job,’ or ‘You can’t make a living as an artist,’” he said. “People have been saying things like that to me all my life, but they’re frightened of a myth — the myth of the starving, dysfunctional artist we see in movies. Then there’s your internal critic, who says you aren’t good enough, you’ll never be as good as this artist or that one. But all I know is, gosh, I’ve been an artist for 48 years. People are doing it everyday.”

Throughout the years, many people have told Ricks that they would like to become artists or pursue some other dream, but they say they don’t know how. Ricks argues they don’t need to know all the steps to be successful, they just need to “play the game,” living as though their dreams are in the process of becoming a reality.

“I’m not sleeping under a bridge, I’m not going hungry, so I don’t know whether I’m just completely foolish or if it’s just that it’s happened so many times over the years, but I don’t need to know how it will happen anymore,” Ricks said. “I just trust that it will happen.”

He recalls worrying as a young artist about paying rent and making ends meet.

“It was the craziest thing — sometimes it was the week before, sometimes it was the day before — but the money would show up. And now I can look back and think, ‘Hmm, this is interesting. Maybe there was something in that process — a bill due or a car payment due — that caused me to get creative. And I actually think that’s available to everybody. That’s what I call living my dream. You just have to begin to play with your dream.”

To embark on a new journey, Ricks does what he calls “playing the game.” First, he writes down the dream, what he would love to do if all obstacles were out of his way.

Then he works through his “yeah buts,” dispelling the arguments against pursuing the dream.

Next he begins to figure out what would need to happen in order to make that dream manifest, asking himself what his life would look like if the dream were a certainty. Would certain bills need to be paid in advance? Is there a particular amount of money required? Does something else need to happen first?

“The way to make each of those things happen doesn’t have to be clear,” he said. “And if I start to get too worried, Jodi asks, ‘What are our needs today?’ There’s a roof over my head. There’s food in the refrigerator. The mortgage is paid. It’s me thinking too far into the future that’s the problem.”

If a friend nay-says the dream or tries to discourage his creativity, Ricks turns his attention to his cheerleaders or champions — people who will encourage him and cheer him on.

“At this point, I can write something down, like, I would like to take a trip to France, and within that day or the next, it starts manifesting,” Ricks said.

Additionally, he advocates for living as though there is plenty when it comes to donating money to charity, tithing 10% of his income to organizations he believes in.

“It’s bizarre, but even during the pandemic, all the bills were paid,” Ricks said. “I had been worried. I think I was holding onto ideas of lack, and it was a wonderful surprise to find out I was wrong.”

To see more of Thom Ricks’ work, go to http://www.thomricks.com or visit his booth during Gruene Market Days, held the third full weekend of each month, February through November.