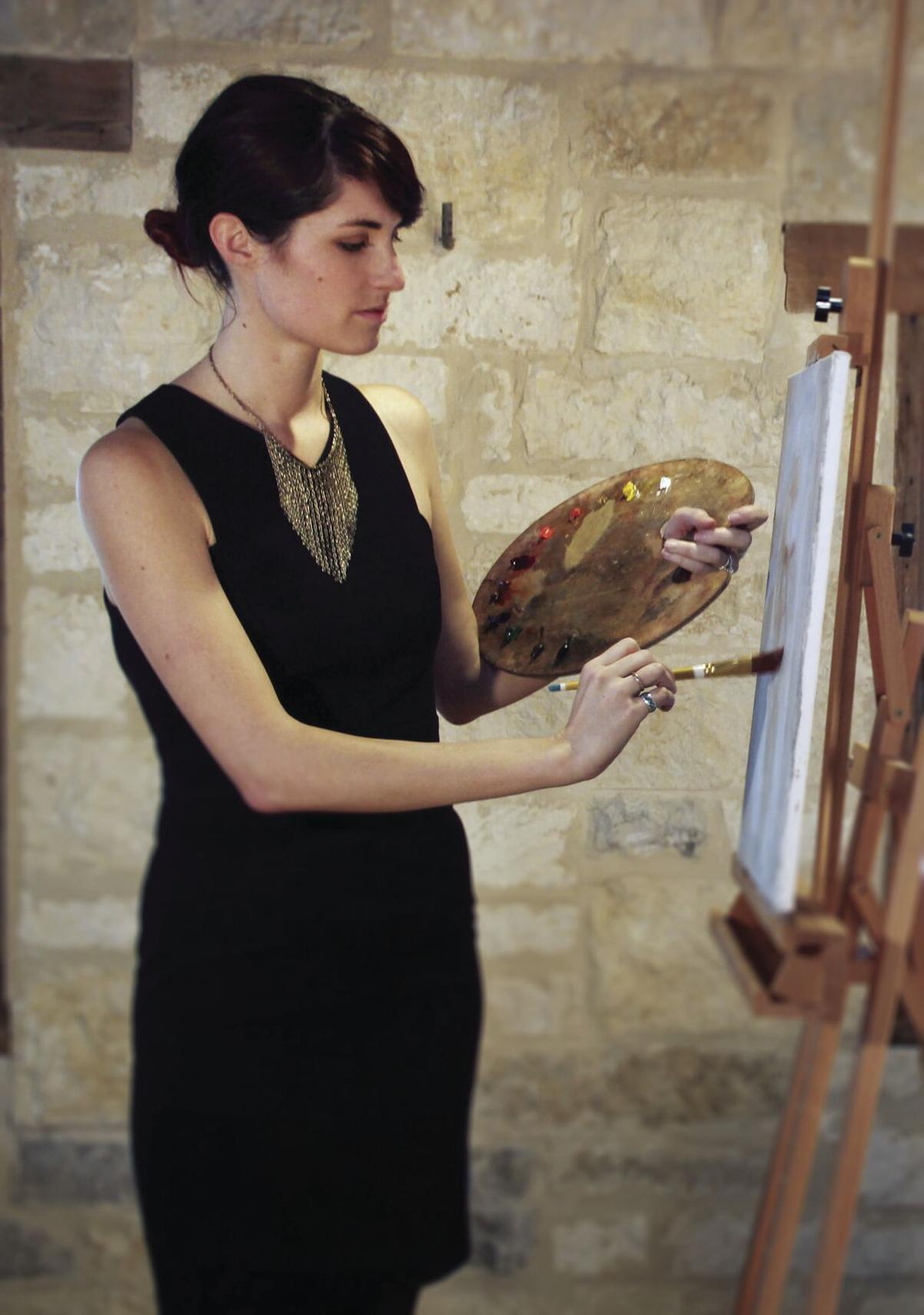 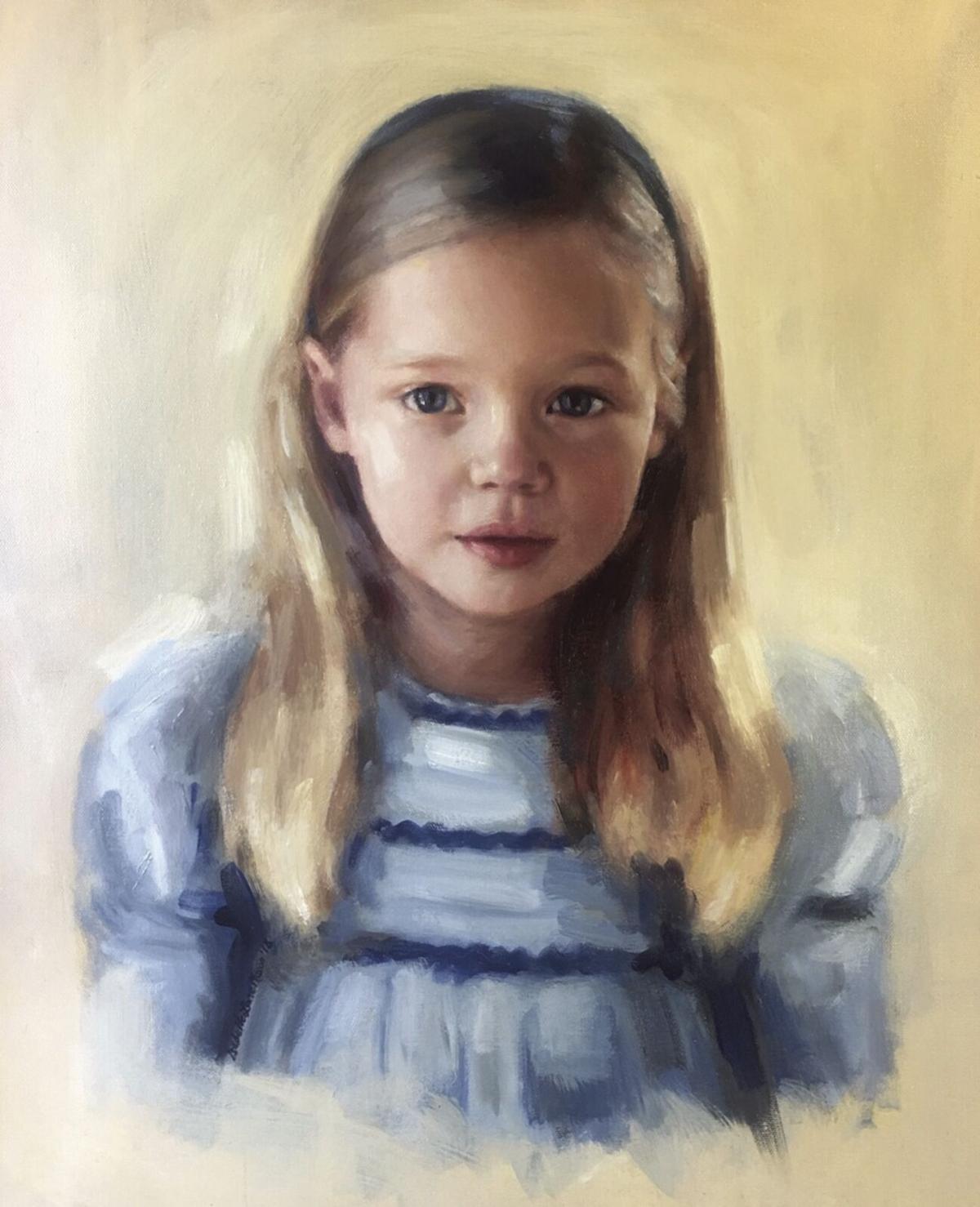 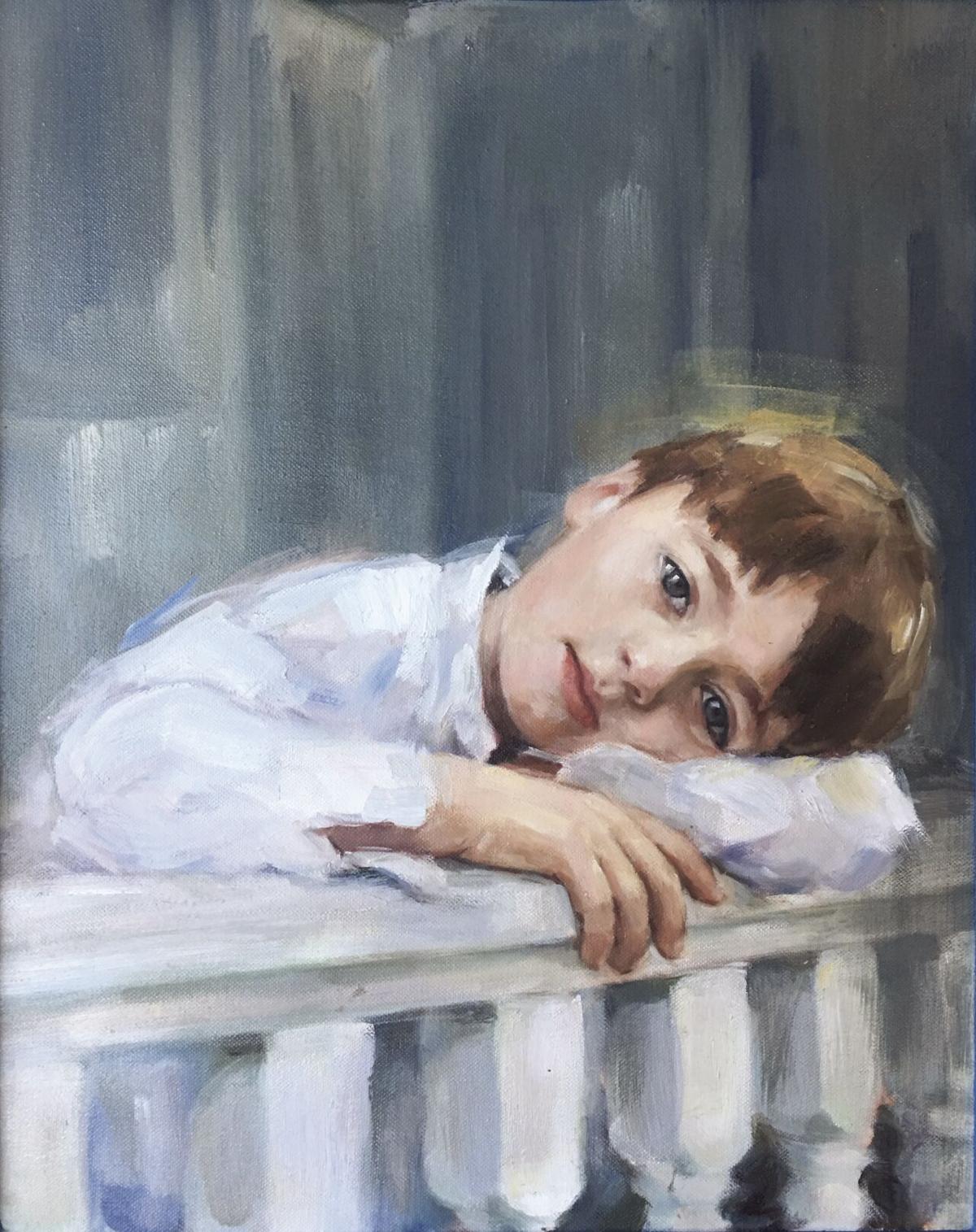 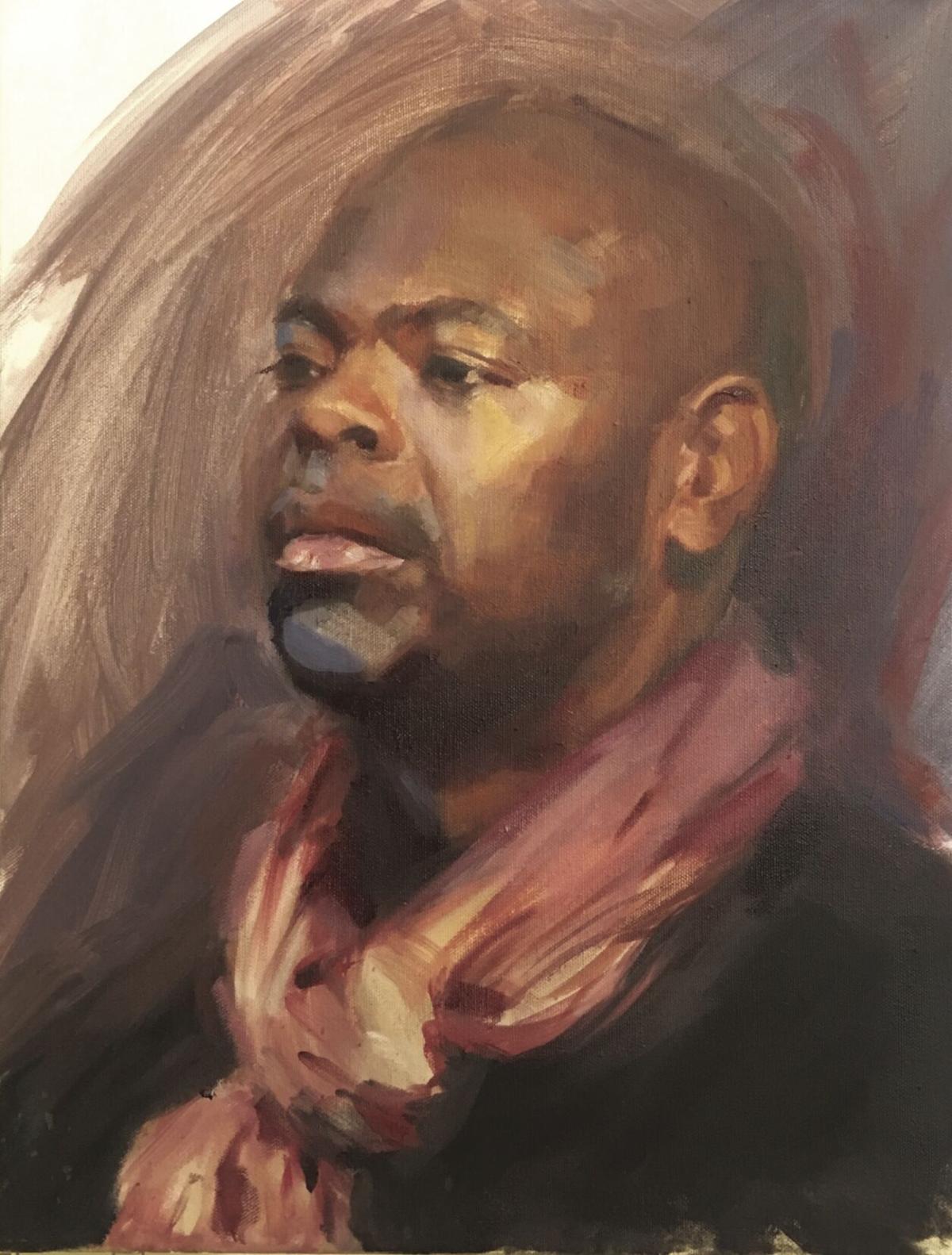 In the age of the selfie, when it’s possible to reconstruct a lifetime from the Cloud, the painted portrait seems an anachronism, a relic of the past reserved for corporate boardrooms, government corridors, halls of academia and mansion walls.

But there are some bright new notes in personal portraiture, which has undergone a renaissance recently — witness Kehinde Wiley’s 2018 portrait of Barak Obama seeming to hover in foliage — and the demand — for those with the monetary means, of course — remains strong.

Isabelle “Izzy” Lane Mason is a 30-year-old New Braunfels artist who executes “between 15 and 20 portraits” annually. She is an associate of Portraits, Inc., an elite organization of artists founded in 1942 in New York City.

With more than 100 thoroughbred painters in its stable, Portraits, Inc. “assists families, corporations and institutions wishing to honor individual legacies with fine art portraits,” according to its mission statement. It is the oldest and largest firm of its kind, and to be asked to join — especially at age 27, as Mason was, three years ago — is quite an honor.

“It was a shock,” she said recently in a telephone interview from her New Braunfels studio. “I think I was one of the two youngest artists ever signed. It was pretty cool.”

Pretty cool, indeed. Portraits, Inc., which handles more than 500 painted portrait commissions a year, navigates the rarified air of the U.S. president and the captain of industry, as well as the family likeness.

The list of distinguished artists Portraits, Inc. has represented includes many giants of the past century, such as Andrew Wyeth, Robert Brackman, Samuel Edmund Oppenheim and Nelson Shanks — whose resume, incidentally, includes both Pope John Paul II and Princess Diana.

According to Jennifer Gray, vice-president of Portraits, Inc.: “As you may or may not know, applying for representation with us is highly competitive,” she wrote in an email. “We hold an open call for new artists once every couple of years and typically get hundreds of applicants each time. Only a handful of new artists are accepted. When Izzy applied with us in 2017, it was a bit of a no-brainer. She possessed all the qualities we look for in our artists. It has been wonderful to watch her grow these past few years, and we certainly look forward to seeing what the future holds for her.”

What that future undoubtedly holds is six-figure commissions, when Mason reaches the major leagues, like her mentor, Nashville-based painter Michael Shane Neal, whose subjects have included George H.W. Bush and Sandra Day O’Connor. For now, Mason creates a 16-by-24-inch head-and-shoulders painting for $2,000-$5,000, depending on the medium: oil, acrylic, pastel or charcoal.

“I get a lot of children commissions, often grandparents wanting a painting of their grandchild,” Mason said. “Which I actually love, having two kids of my own.”

One of those clients is Diane Irvin, a Lexington, Ky. grandmother who commissioned Mason to paint two of her young grandkids — and plans portraits of the other three, when they reach age 4 or 5.

“She’s a wonderful portrait artist, a wonderful person, actually,” Irvin, 63, said over the phone. “She wants to meet the child, and she got right down on the floor with them, doing puzzles, drawing pictures. I’m from New Orleans, and everybody in the Deep South from my era has a childhood portrait. I have one of myself when I was about 12. There’s just no comparison to a studio photograph. It’s just, so much … forever. A painting becomes a family keepsake, and Izzy somehow puts a little twinkle in the eye.”

Neal, considered one of the premier portrait painters in the country, notes that “the primary objective of a portrait artist is to use both your head and your heart to create strong impressions of your subjects.”

“You must have a sensitive nature with the capacity to respond to the unique personalities of your sitters,” the artist wrote in an email. “Many times ‘feeling’ trumps the academic aspects of working as an artist, but neither should be the only objective of a good painter. Izzy is successfully utilizing both these important principles as she navigates the challenging but rewarding task of creating successful portraits. I’ve known Izzy for several years, and it’s clear to me, as a viewer of her work, that both her love of the process and her deep appreciation of her subjects come together to create strong works of art. Her portraits are uniquely sensitive and insightful.”

Born and raised in Austin, Mason has been drawing people — doodling, mostly — all her life. And she’s well acquainted with posing; statuesque and strikingly beautiful, Mason was a professional model in Texas and New York between the ages of 15 and 18.

But she decided she would rather create than be a subject, and studied art at Abilene Christian College, where she met her husband, Lark Mason III, who is now marketing and operations director for Lark Mason Associates, the global auction house based in New Braunfels.

“We actually met in the art studio at college,” Lark Mason recalled. “I remember she was working on hands. And she said she liked painting hands because they were hard. She still likes to challenge herself. With portrait painting, as she gets better and better, it becomes more obvious that this is what she’s passionate about, and this is what she should be doing.”

Izzy Mason says she’s “always been interested in art and in people, so I’ve found a field where I can combine two of my favorite things.”

“All my old sketchbooks are full of people’s faces, or features of faces,” she said. “The face is a challenge to me.”

A Mason portrait begins with a meeting, an hour or more of conversation.

“It’s really important to work from life,” she said. “Of course, I take lots of photos of a subject, and we narrow down which images will go into the final painting together. But if you just work from photos, it can be a flat, sort of lifeless.”

The process goes through several stages, including an initial sketch at that first meeting to get the general shape of the head, a later color study to capture the appropriate skin tones and a more detailed likeness based on measurements of facial features.

“You want to make sure his nose is his nose, you know?” Mason said.

A portrait foremost must mirror the subject, and perhaps that is one of the major attractions of a painting over a photograph: Human hands did this. There is also the sense that someone took so much time and effort, paid so much attention to a person who means the world to you. The artist, in that sense, gets it.

“A photograph captures a moment in time, whereas a portrait captures a lifetime in a moment,” said Portraits, Inc.’s Gray. “This is certainly the aim of any portrait artist, though not something many artists can pull off. It is a rare gift. A second — though perhaps not secondary — objective of the portrait artist is to successfully unite his or her vision for the portrait with that of the client, who, after all, is the one paying for the work. Again, no easy task. Izzy is quite successful on both counts.”

A painted portrait, said Mason, is made up of many different — and often difficult — choices made over time by the artist.

“It’s more of a compilation of a person, reflecting different aspects of character,” she said. “A good portrait artist is just able to capture more of the person. I spend weeks working on a single portrait, staring at this image of a subject that I’m trying to bring to life. I think I’m continuing to get better, but you can never be satisfied. I look back at the portraits I’ve painted, and there’s something in every one of them that I would like to go back and fix.”