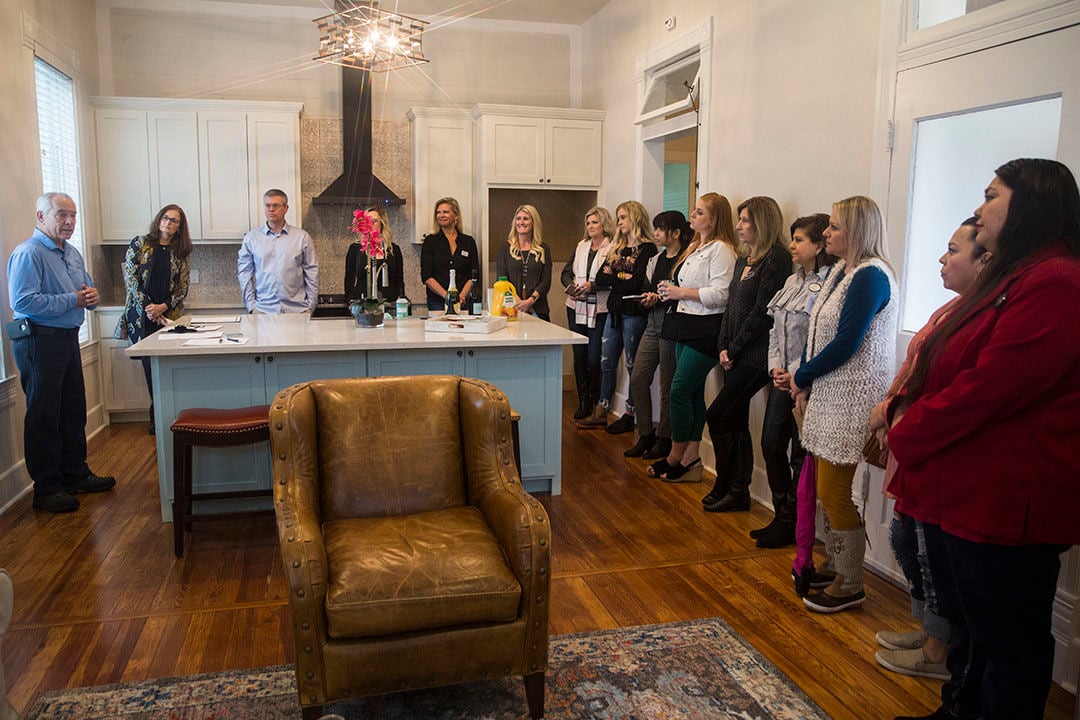 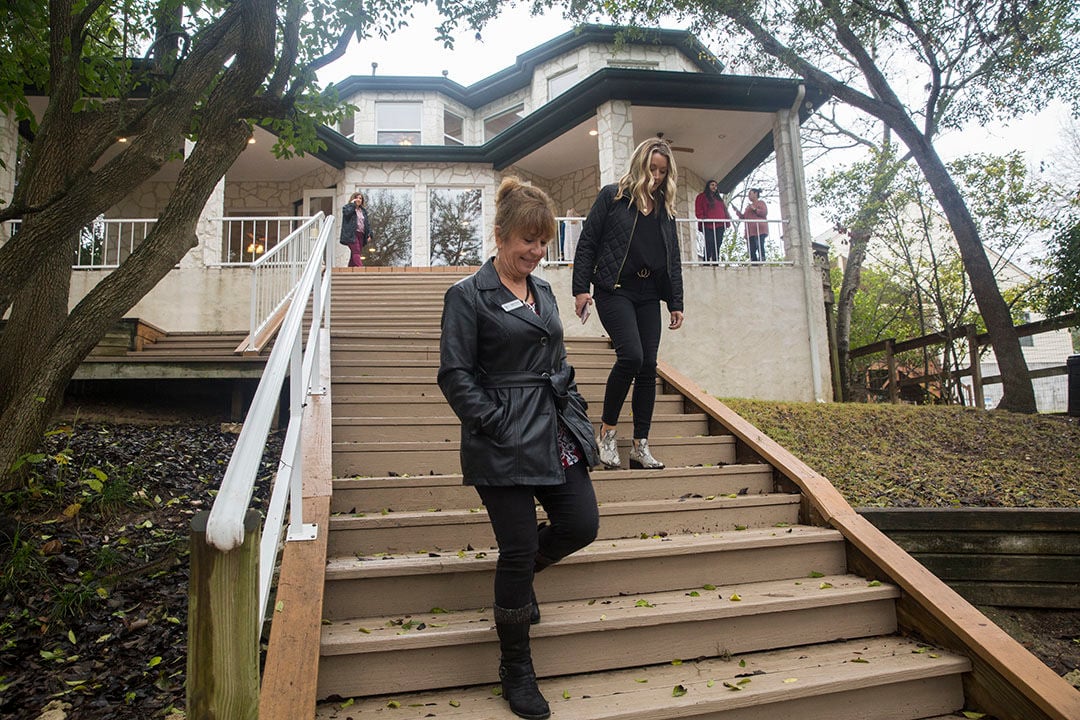 Real estate agents tour a home in downtown New Braunfels on Friday, Jan. 17, 2020. This home was located next to the Comal River and priced at $1.5 million. MIKALA COMPTON | Herald-Zeitung 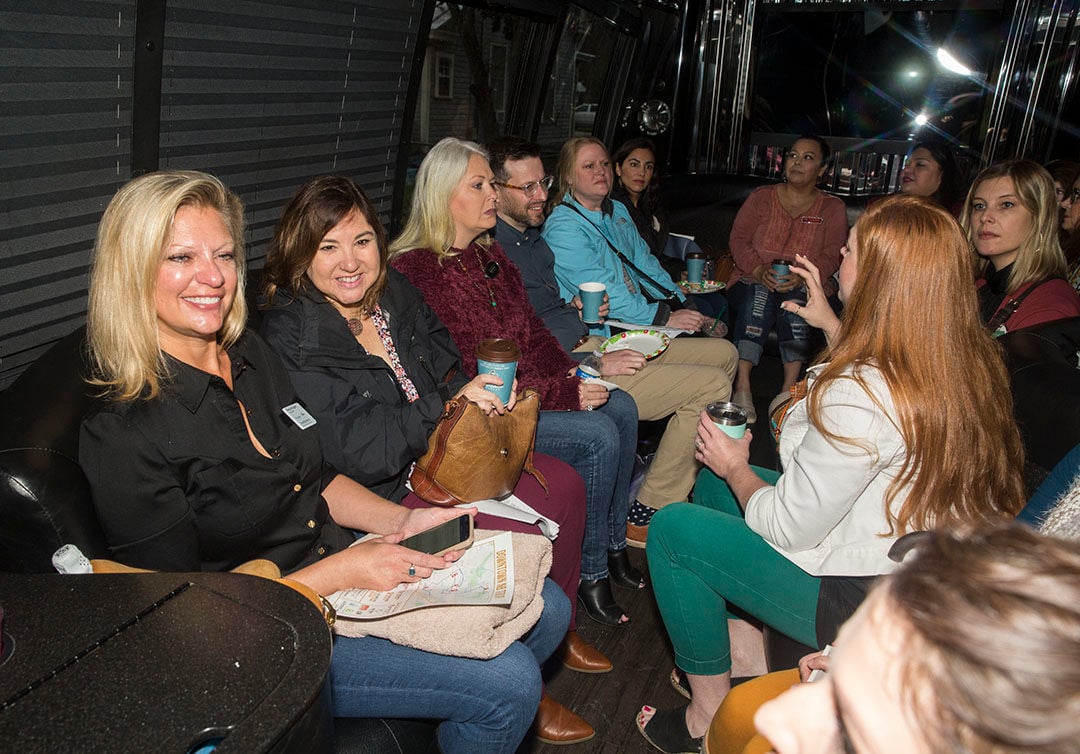 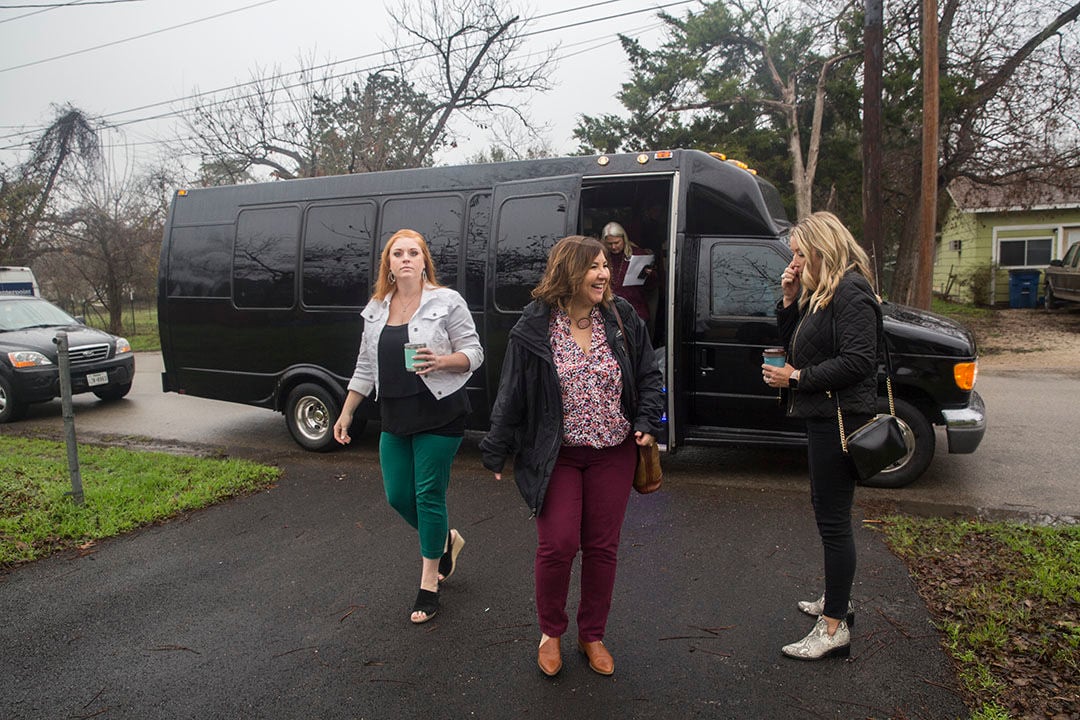 Real estate agents exit the bus after arriving at the first stop in the luxury homes tour in downtown New Braunfels on Friday, Jan. 17, 2020. The tour took real estate agents on a party bus tour of homes for sale. The event was sponsored by Right Angle Inspections & Goosehead Insurance. MIKALA COMPTON | Herald-Zeitung

Real estate agents tour a home in downtown New Braunfels on Friday, Jan. 17, 2020. This home was located next to the Comal River and priced at $1.5 million. MIKALA COMPTON | Herald-Zeitung

Real estate agents exit the bus after arriving at the first stop in the luxury homes tour in downtown New Braunfels on Friday, Jan. 17, 2020. The tour took real estate agents on a party bus tour of homes for sale. The event was sponsored by Right Angle Inspections & Goosehead Insurance. MIKALA COMPTON | Herald-Zeitung

As New Braunfels’ population booms, homeowners and home shoppers alike are seeing the value of preserving and updating the city’s older homes with fresh paint and modern conveniences.

“There’s a lot of people coming in here and flipping these old homes into something gorgeous,” said Amy Knight, realtor and vice president of Kuper Sotheby’s International Realty. “And there’s plenty of old homes left to do.”

Real estate agents, curious homeowners and soon-to-be homeowners perused luxury homes earlier this month via a downtown bus tour. The tourists hopped into a “party bus” and were dropped off at numerous homes ranging in style and price, where they received guided tours highlighting the homes’ unique features.

Knight lives in a flipped old home from 1918 in downtown and said that area has a mix of homes a little older than hers and others built in the 1930s and 1940s. Hopeful homeowners are mainly flocking to downtown or to secure a house nearby, she explained.

“They want the charm of the old home but they want the air conditioning and insulation of a new one,” Knight said.

Once flipped, the homes can double in value since the maintenance and updates are a long-term and often worthwhile investment.

“Our market is on a boom,” she said. “Quite a few buyers want to be downtown, and so that’s why these downtown house values have gone up like they have and Town Creek being built so everyone can live a little closer with a brand new home.”

Town Creek is an urban planning neighborhood off North Walnut Avenue and Landa Street. Other popular areas include areas off Highway 46 and FM 306.

“Downtown is the biggest growth area,” Knight said. “46 has really got a lot of growth going on out there, but some people want that land and some prefer to be closer (to downtown).”

Census data shows New Braunfels is the second fastest growing city in the U.S., and Knight said those moving here are a mix of families, single residents and especially military retirees in their 40s.

“We have a lot of (military retirees) coming in and making their final homes here, close enough to the military bases but yet they can still get a job as a civilian and love their neighborhood.”

One house on the tour on East North Street is quaint with a freshly painted, light blue exterior. It features a modern kitchen with a solid island and smooth, white countertops. The house still keeps its dark wood floors and back area.

Another house on Comal Avenue sits on the Comal River and boasts a spacious living and kitchen area along with numerous terraced decks.

“It lets agents see what houses are on the market and I feel like we provide great sponsors that could be resourceful for the real estate agents to know that these people exist locally in my area and can help my business,” Mills said.

After people settle downtown, Knight said residents feel perfectly comfortable where they are.

“Nobody wants to move, the people who live in the neighborhoods have become such a bonded family with everyone that you just don’t want to go,” Knight said.