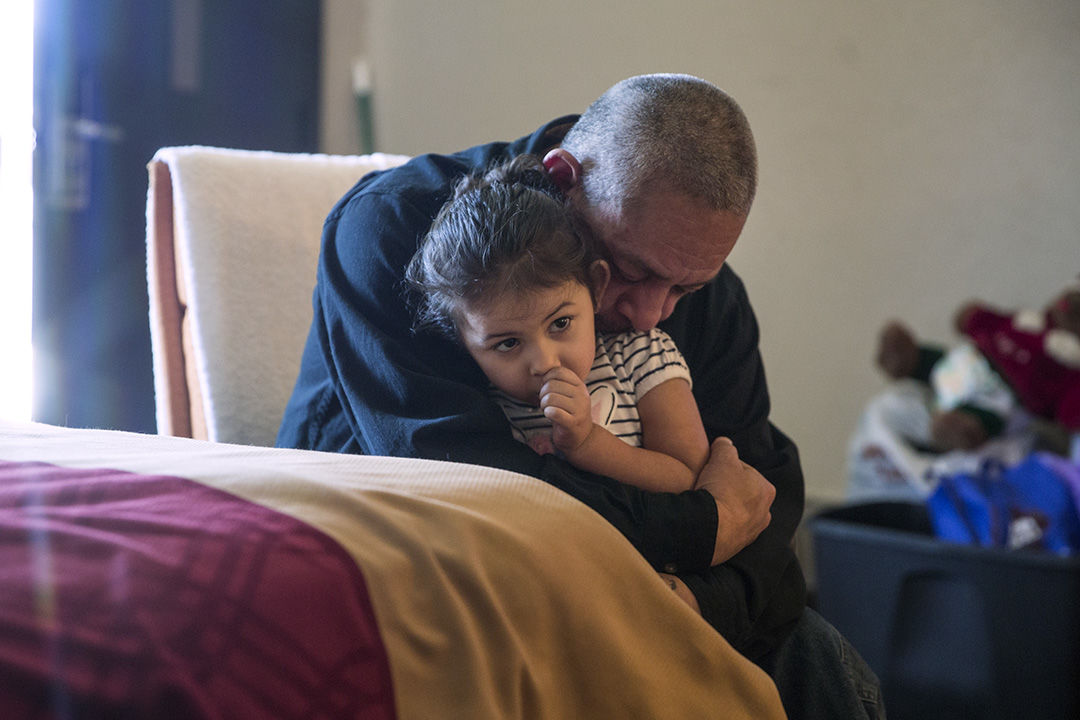 Edward Espinoza hugs his granddaughter, Lucy Medellin, 3, at their temporary residence at the Rodeway Inn on Thursday, Feb. 13, 2020. Both lived in the home that caught fire on Feb. 6. "I'm just glad everyone is safe," Espinoza said. MIKALA COMPTON | Herald-Zeitung 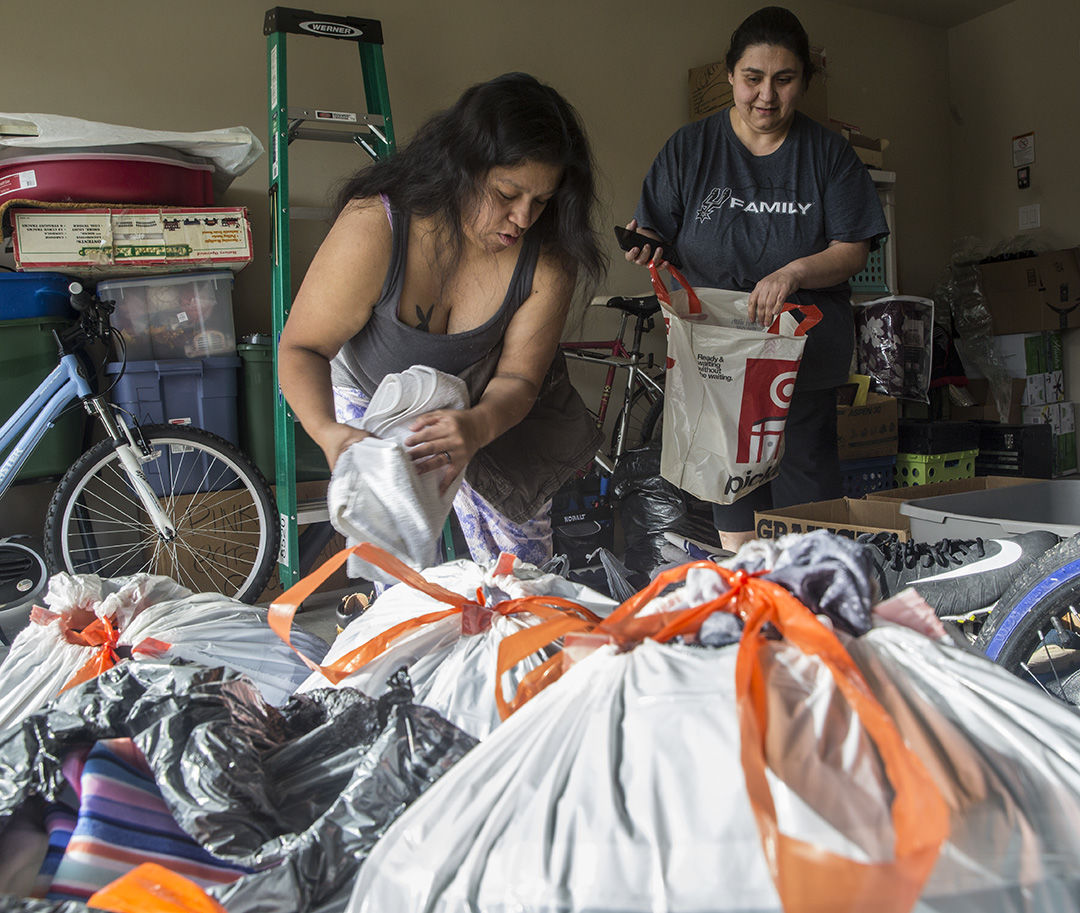 Edward Espinoza hugs his granddaughter, Lucy Medellin, 3, at their temporary residence at the Rodeway Inn on Thursday, Feb. 13, 2020. Both lived in the home that caught fire on Feb. 6. "I'm just glad everyone is safe," Espinoza said. MIKALA COMPTON | Herald-Zeitung

Edward Espinoza, 49, was working in his garage last Friday around 10 a.m., tinkering with some broken TVs, as he usually is working on some kind of project.

Espinoza noticed some trouble with an electrical breaker box turning off, so he started unplugging appliances to see if it was overcrowded. Espinoza then turned the breaker back on.

He had a friend come over for help fixing something and was just about to leave when the breaker turned off. Several minutes later, his friend noticed smoke coming from Espinoza’s daughter’s bedroom, and panic ensued.

“He starts walking out the door when he turns around and tells me that the house is on fire,” Espinoza said.

It was Espinoza’s father’s house, and before his eyes he saw the old home become engulfed in flames. Espinoza hurriedly crawled into the kitchen via a sliding door in the back and called out trying to find family members.

There were 12 people, directly related or through marriage, staying in the one-story house off Loma Vista Street.

“I came back out, went into the garage and tried to find a flashlight and I went back in,”

Espinoza said. “I ended up going out and that’s when I saw the officer and he said, ‘They’re safe, they’re out.”

Evette Espinoza, Edward’s wife, is a caregiver and was at work during this time when she received an urgent call from her son to come to home.

“I didn’t know what was going on,” said Evette, 48. “And then he calls me back and he says, ‘You need to get over here quick, the house is on fire.’ I didn’t even clock out. I just ran up the hill and they told me I couldn’t go through and I was like, ‘Well, my family is in there.’”

Evette found her way through the chaos and laid eyes on her daughter, Karisa Espinoza, 24.

“I just saw my daughter and she just looked at me and cried, ‘Mom!’” Evette said. “Just seeing her like that broke my heart.”

Everyone survived the fire which raged for about 45 minutes to an hour, with smoke clouding the sky and concerning passersby. Yet two family members, Karisa and her son, Messiah Medellin, were severely burned and transported to the hospital.

Messiah, who is only 2-years-old, suffered severe burns. His cousin, Jennifer Van Heckeeren, did not live in the house but got there around 10:30 a.m. and 11 a.m.

She said she was scared since she wondered if everyone was outside, and when she saw Messiah going into the ambulance, she jumped in with him.

“Dad was burned, as well, and Dad didn’t want him to go by himself to the hospital,” Van Heckeeren said. “But dad had to go get checked also, so I was like, ‘Well, I’ll go with Messiah,’ with like no hesitation.”

The fire all but leveled the family’s home.

Under the same roof

Over time, various family members moved into the home. The house had been in the family for a long time and was flexible, with spaces and rooms added on to accommodate everyone.

Edward purchased the home back in 1993.

Initially, just they and their son, Jonathan, and his girlfriend lived in the house. Later came Karisa and her husband, Luis, 23, and their two children, Messiah and Luciana,  Medellin, 3.

Luis’ teenage brother and sister also lived there, and Edward said their dad had trouble with finding a place to stay. So, Edward and Evette took care of the kids.

“We told them that we’d take the kids in,” Edward said. “If somebody’s homeless and they need help, I take them in.”

Another couple lived in the back area, and they had no other place to go.

“I told them you could come temporarily but you know, eventually you need to just get on your feet,” Edward said. “But that’s just who I am. If anybody needs help, I help them.”

Edward’s sister passed away, and he also let her husband stay at the house.

Edward’s brother, Jesse, lived with his three dogs in the garage area which had electricity, a toilet and shower. Edward’s nephew-in-law was making his own room behind Jesse.

Jesse left the house after the fire and Edward and Evette have not seen him since. They worry he is homeless.

Edward said everyone is spread out and he needs to take care of who he can.

“I gotta think about my grandkids, my daughter,” Edward said. “It does hurt me that my brother — I don’t know where he’s at because he’s got no place to go.”

Edward said he wishes he could do more for everyone.

“I’d rather help people than be helped,” Edward said. “I’m a giver, not a taker.”

The Espinozas thanked the Red Cross, whose local volunteers, with many from San Antonio, provided food and clothing on the spot.

“We provide comfort kits, toiletries, blankets,” Castillo said. “Through the case that we open we can identify if they have any medical needs.”

“We are kind of like the second responders if needed,” Castillo said. “We kind of step in to help them navigate the next steps to recovery.”

Mari Hernandez, who is unrelated to the family, also saw the tragic news and took to Facebook to help the various family members who are without a home.

As an administrator of the “Real Moms of New Braunfels” Facebook group, Hernandez posted a list of necessities for the family, ranging from diapers to microwaveable food.

Within a few hours, comments offering help flooded in, and Hernandez found herself and her family arranging boxes of items including ramen, shampoo and clothes filling their hallway and garage.

“I posted it and people started bringing things right away,” Hernandez said. “Other moms said ‘Hey, I have toiletries,’ and I took a lot of stuff over there already. I took out baby shampoo and I had people bring diapers.”

Those wanting to donate can also contact Mari Hernandez, and Evette has a Jefferson Bank account under her other name Maria Evette Herandez where people can donate money.

“We’ve had so much help from the Moms of New Braunfels, our daughter has been helping us,” Evette said. “We’re doing OK, just taking it day by day.”

When it comes to expenses, family’s medical bills are taken care of, since Karisa and her son are on Medicaid, Evette said. The family has many donations, but they are worried about where their next home will be.

“I’m worried about where we’re going to go,” Evette said. “But I know god will find us somewhere that will be big enough for Karisa and the kids.”

On Monday, the Espinozas were supposed to pick up a city permit to build a shed in the back and fence to further expand their home. They have not yet received a permit, and the New Braunfels Fire Marshal has received complaints about the shed still being there.

They now need a permit to demolish the structure, but they can not do so until everything is closed up. Espinoza’s mother, who is in her 70s, wishes to sell the property. Yet Edward said he has hope it can be rebuilt.

The home has sentimental value for Edward, who said his dad put his heart and soul into fixing it up.

“He was working on the plumbing underneath the house — he came out and went to the back steps and his defibrillator started to kick in,” Edward said. “He literally died working on that house.”

Edward had plans to start his own car business, such as doing oil changes and repairing brakes, but those plans are put on hold.

Jennifer Van Heeckeren said she had fond memories going over to see her grandfather at his home. Edward would often take his grandkids and push them around in small wagons in the front yard.

With so many people living in the house, Edward laughed and said it had its “ups and downs.”

“My grandpa bought that house I think when I was, like, in sixth grade,” Van Heeckeren said. “When my grandpa was alive we always went over there, and everybody in the family has lived there at one point in life.”

Some extended family left the home with a bad reputation among the neighbors, and he said he hopes to change that around. Looking forward, Edward and Evette said they are eager for Karisa to come home and have everyone together again.

“I want to thank everybody, all the organizations have been wonderful,” Edward said. “Our prayers go to them as well. I just thank god everyday that everyone is still here.”