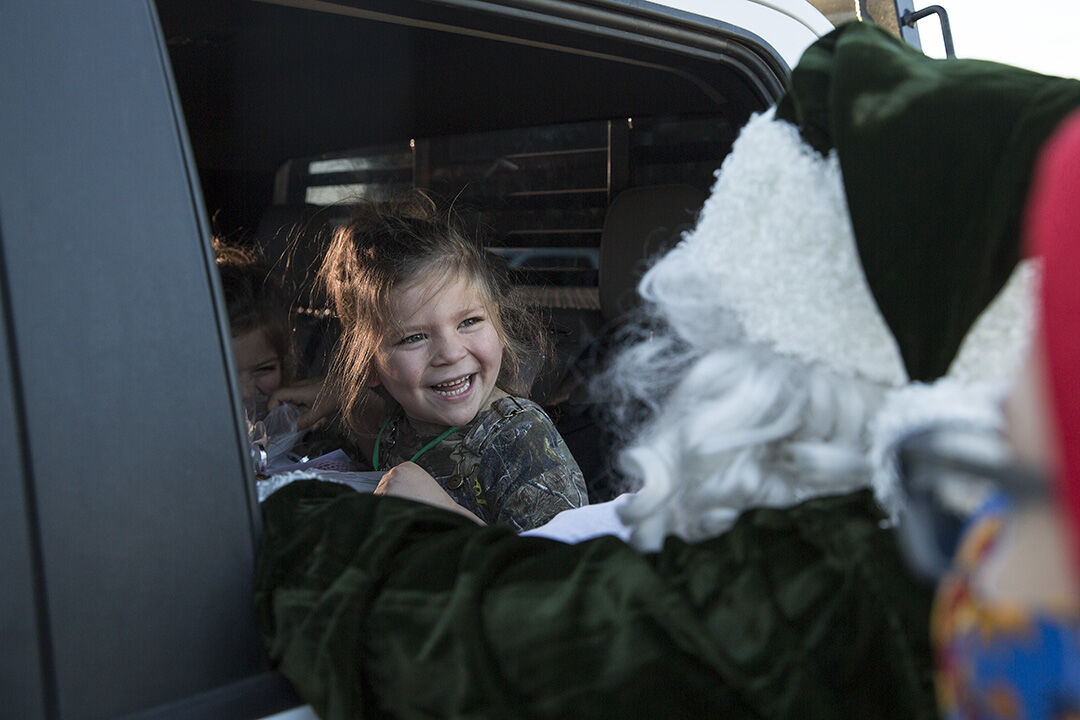 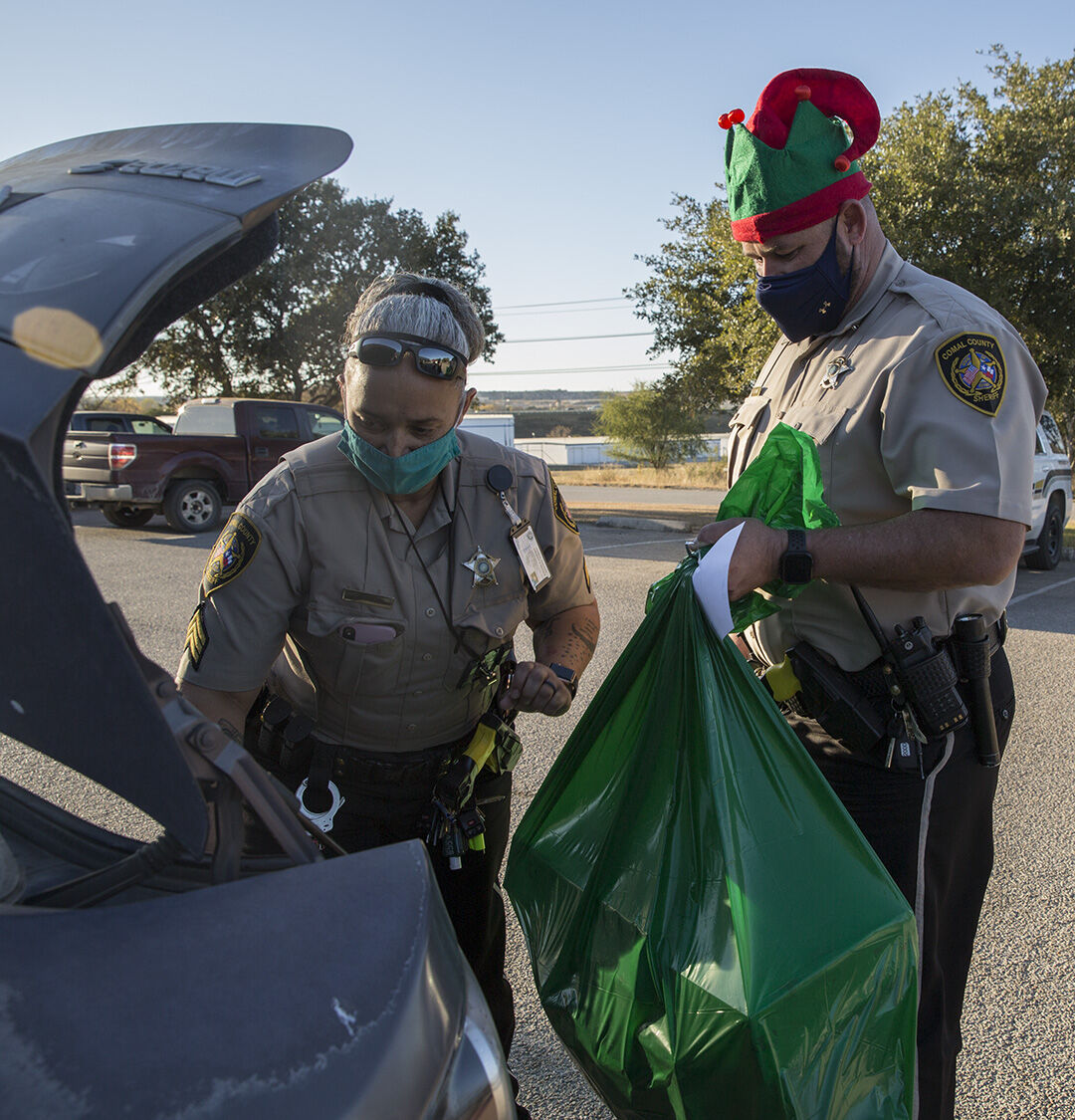 Sergeant Shawna Rangel and Lieutenant Mike Smith load presents into the back of a family's car for Green Santa at the Comal County Sheriff's Office on Wednesday, Dec. 16, 2020. MIKALA COMPTON | Herald-Zeitung 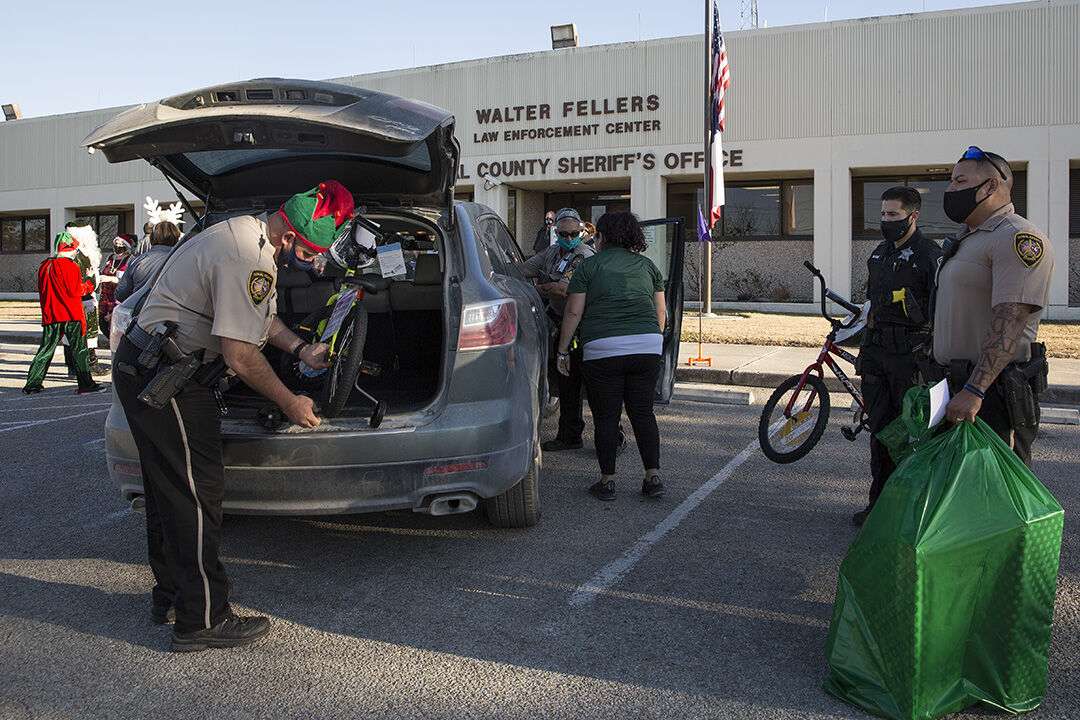 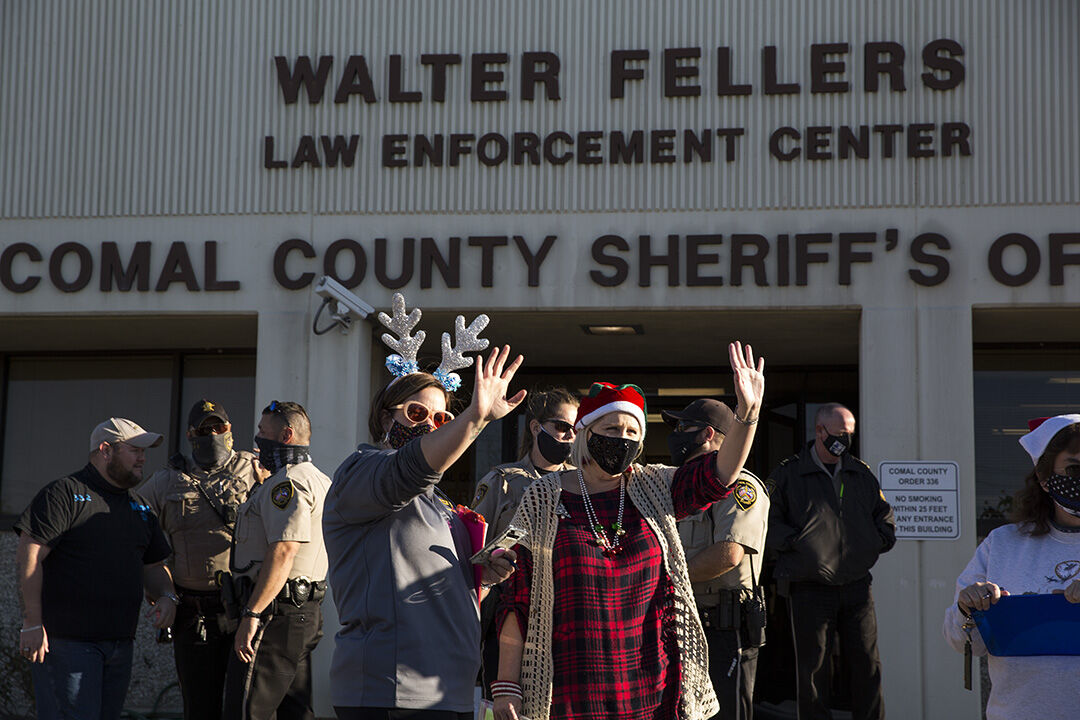 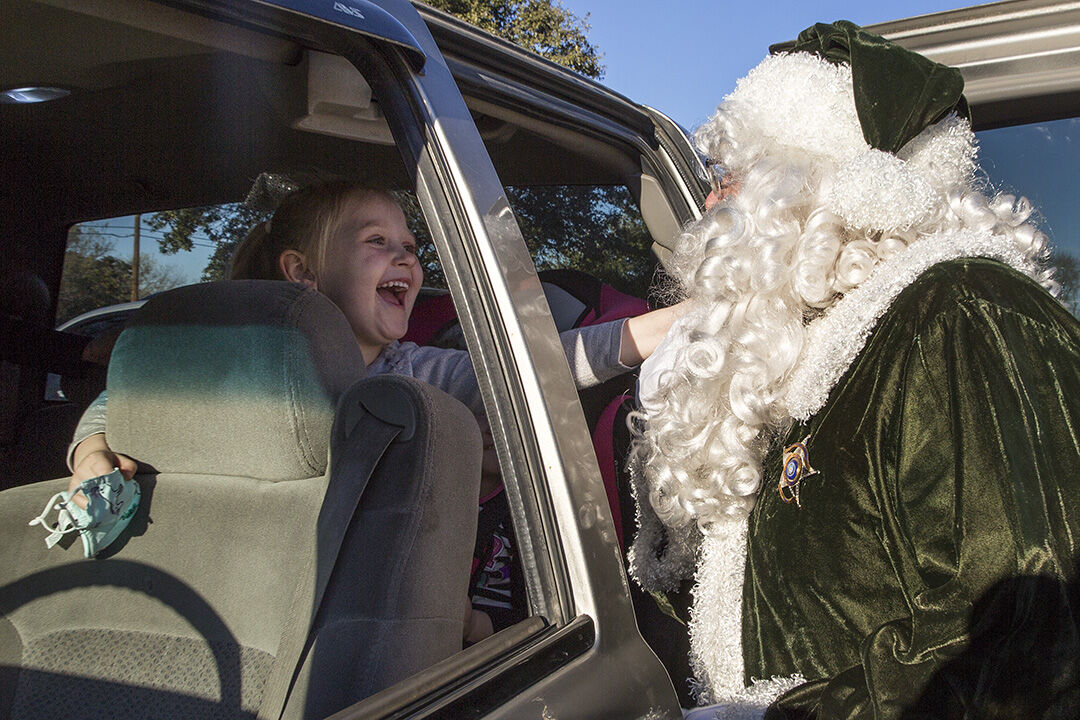 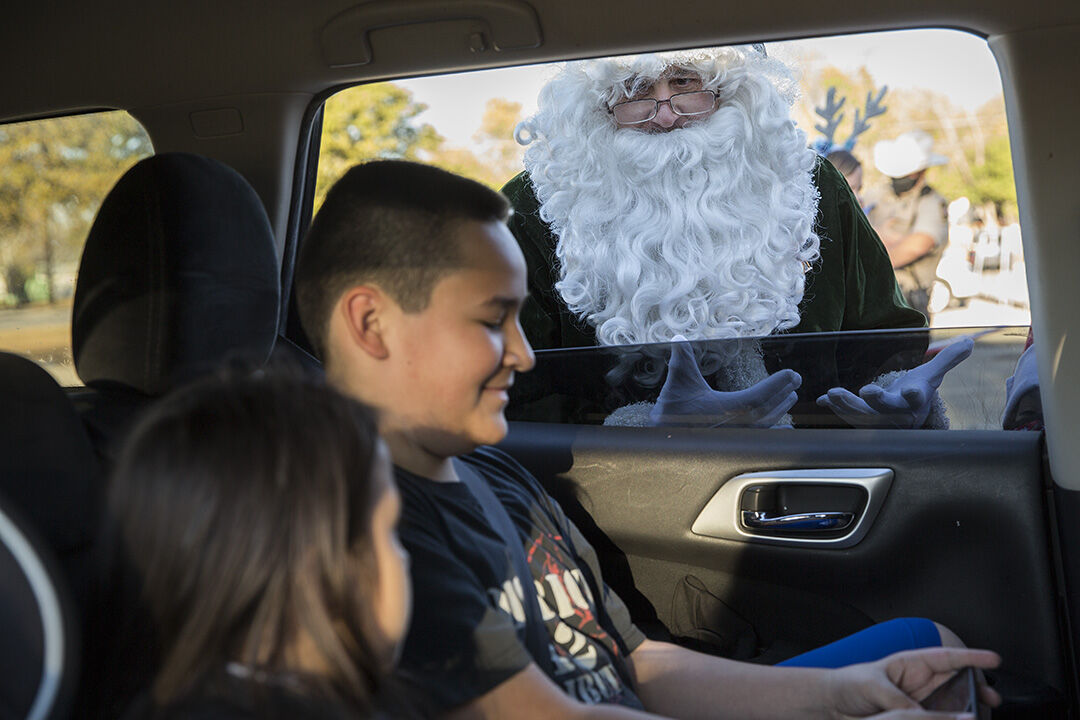 Green Santa talks to Giovanni and Alexandria Olivarez as they pick up their gifts at the Comal County Sheriff's Office on Wednesday, Dec. 16, 2020. MIKALA COMPTON | Herald-Zeitung 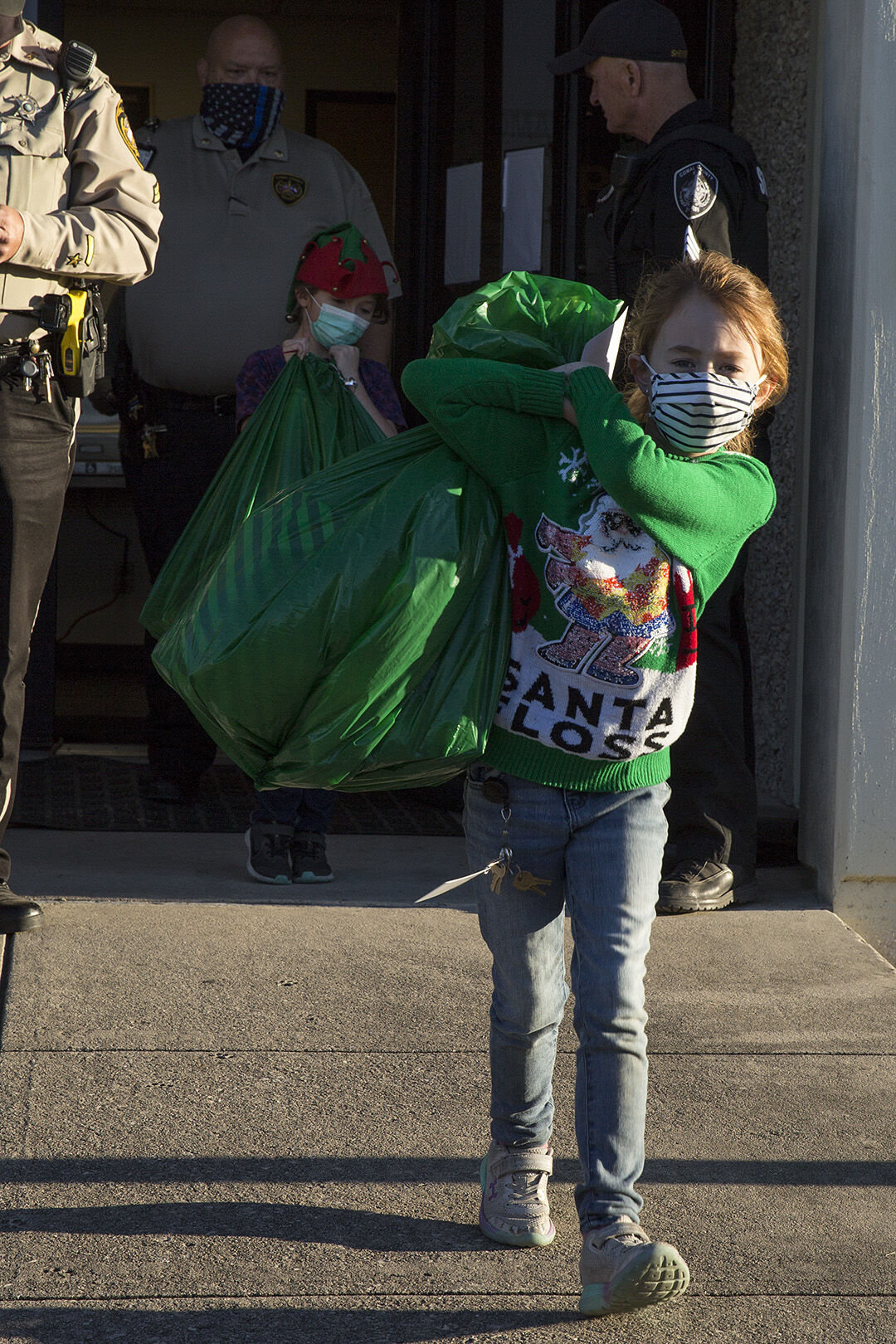 Sergeant Shawna Rangel and Lieutenant Mike Smith load presents into the back of a family's car for Green Santa at the Comal County Sheriff's Office on Wednesday, Dec. 16, 2020. MIKALA COMPTON | Herald-Zeitung

Green Santa talks to Giovanni and Alexandria Olivarez as they pick up their gifts at the Comal County Sheriff's Office on Wednesday, Dec. 16, 2020. MIKALA COMPTON | Herald-Zeitung

Seeing the faces of wide-eyed youngsters not used to seeing a Green Santa quickly transformed into smiles and laughter was a gift in itself Wednesday afternoon.

“It means that much more this year, because of COVID and the difficulties that it has presented on all of us,” Sheriff Mark Reynolds said. “We weren’t going to let that stop us from carrying out the mission of Green Santa, and making sure some of these kids would be able to celebrate Christmas.”

“This means a lot to me, and it’s a great help – I want to thank them so much,” said Christina Gutierrez, whose two girls and a boy, ages 6, 5 and the youngest turning 4 on Thursday, were all bundled up in family’s SUV.

Gutierrez said the family is getting by in spite of her stepfather’s battle against COVID.

“Their grandfather has been in the hospital since August,” she said. “His lungs aren’t fully recovering the way the doctors want, so it’s up and down for him. But we’re praying for him, and will try to have a good Christmas.”

“Our shoppers are the ones who had to overcome quite a bit – they had to do it a little bit different this year,” she said. “Some went online and others went in person for the gifts, which they got through the Santa program coordinator, estimated 145 kids and 54 families would receive gifts this year, all purchased by “elves” from the CCSO and the Comal County Citizens Sheriff’s Alumni Association.

CCSO Deputy Chris Phillips, his fiancée Amber Schkade, and his parents Carla and Brandon Phillips, all shopped for gifts.

“It’s been a hard year for a lot of folks,” Brandon Phillips said. “We’ve been so blessed, and with everything going on, we just want to share what we have got with people who are less fortunate. It’s our second year doing it and it’s going to be a long-term thing.”

Richard Hendricks and his wife Dorothy annually contributed to and attended Green Santa events for years before she passed away almost two years ago.

“I wouldn’t miss this for the world,” said Hendricks, joined by daughter Beth Wyndham, adding seeing the kids react to Green Santa and the gifts was his wife’s favorite holiday present.

A trio of masked children of CCSO staffers raced in and out of the building to retrieve the smaller gift bags, with Green Santa (Deputy Ron Lanigan) and other CCSO officers and deputies assisting with heavier bags. Hendon said at least 20 bicycles were among goods packed into cars and trucks.

Usually, family members would be greeted by deputies and employees and escorted into the lobby to pick up gifts and take photos with Green Santa. Wednesday’s event, back dropped by blue skies and a brilliant sunset, was just as perfect.

“We just moved Santa from inside the building to curbside,” Hendon said, adding only the delivery method changed this year.

“It feels good to give back to the community because a lot people otherwise wouldn’t have Christmas,” Jail Administrator Maj. Bill Jennings added. “It’s been a tough year, and it’s nice to bring smiles to people’s faces.”

Reynolds credited donors and his staffers for making the 31st edition of Green Santa safe and successful.

“Those who committed the time made sure nothing was going to stop them,” Reynolds said. “The elves are as excited as the families they’re delivering to. This year made it a little more personal. And as you see them pull up and leave with gifts, all you need to see are the smiles on the kids’ faces — that’s what all of this means to us.”