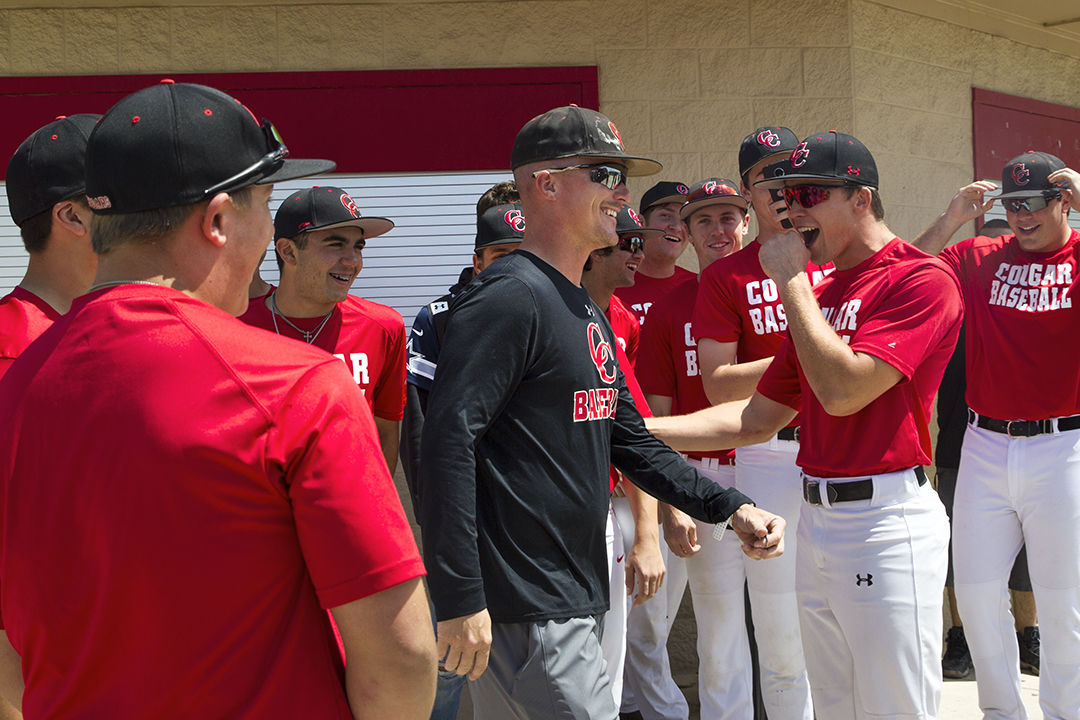 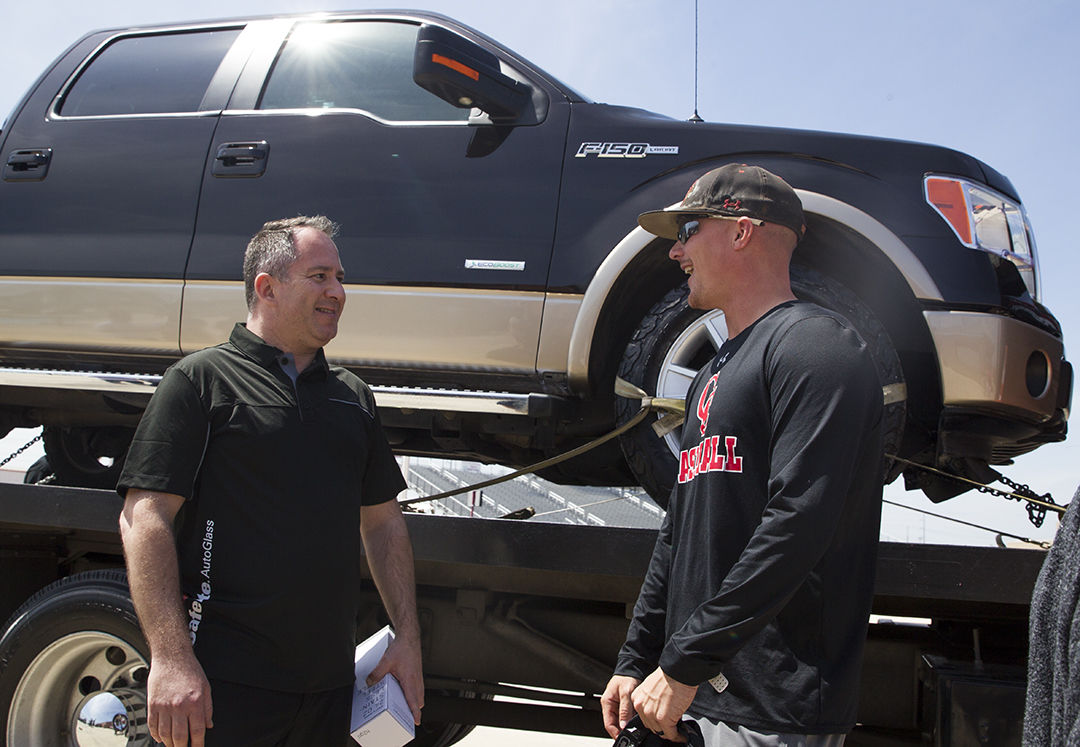 Chris Laugel, a manager at Safelite AutoGlass, speaks with Canyon head baseball coach Reagan Moczygemba as he delivers him his car at Canyon High School on Wednesday, March 27, 2019. 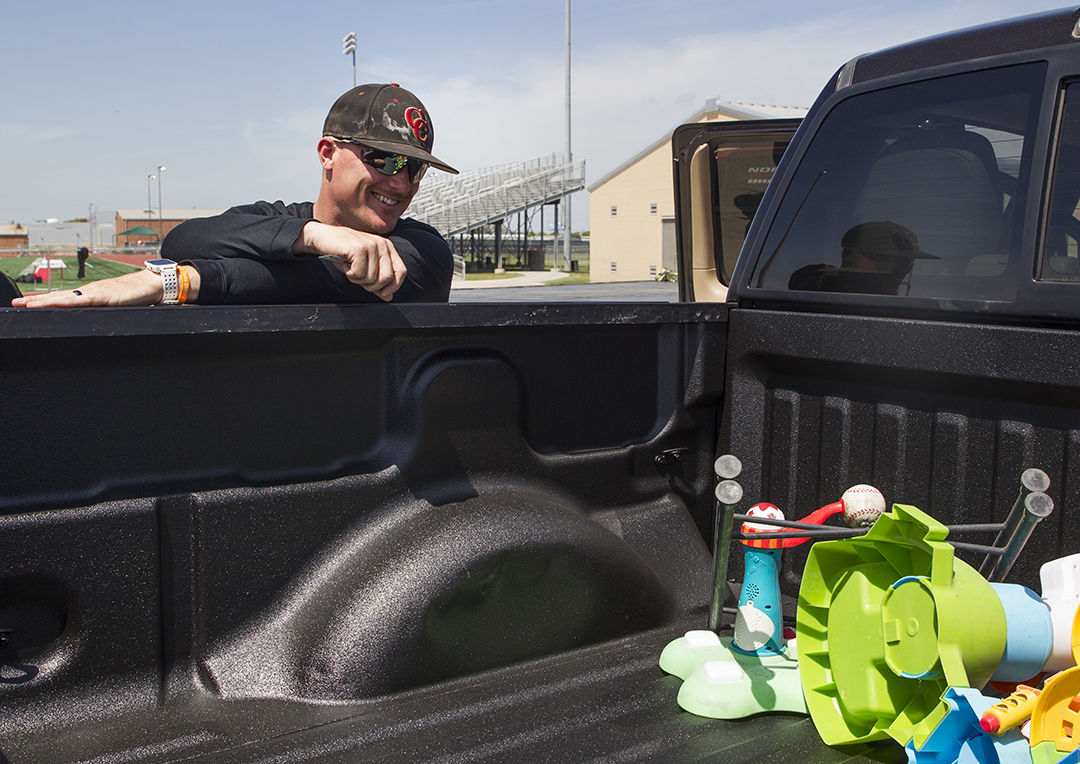 Chris Laugel, a manager at Safelite AutoGlass, speaks with Canyon head baseball coach Reagan Moczygemba as he delivers him his car at Canyon High School on Wednesday, March 27, 2019.

A New Braunfels coach was shocked Wednesday afternoon when he received his completely repainted and detailed truck, free of charge.

The coach’s vandalized truck went viral after Moczygemba’s sister shared a social media post depicting the tagged truck on Twitter. It was exactly this viral post that attracted the attention of Leandra Cameron, a New Braunfels native who works as the assistant manager at a Safelite AutoGlass shop in San Antonio.

“When we heard the news about Moczygemba’s truck being vandalized on campus I felt like this was something we could help out with,” Cameron said. “I was raised here in New Braunfels and when something like this happens, we come together.”

Cameron reached out to Moczygemba, offering to replace all pieces of glass on Safelite’s dime to help him out because of the vandalism, Cameron said.

“We shared his story with a local body shop here in San Antonio that we pair up normally, and they went ahead and covered an entire paint job on the vehicle,” Cameron said. “We also paired up with Bluebonnet Motors to get some parts needed that weren’t repairable.”

“We told the shop owner (Abraham Acala) about the coach’s truck, and so he said, ‘Yeah, we’d love to help,’” Laugel said. “So they did the body, the interior, the bed — for all intents and purposes, it’s basically a new truck, it looks a lot better.”

The handymen at Northeast Customs Collision put in tons of extra man-hours to make sure the coach’s truck was ready to return to him on time, Acala said.

“I was amazed to see how our guys took on the challenge and took time out of their own schedules to make it happen,” Acala said. “And we’re giving him a lifetime warranty on the body job.”

Northeast Customs Collision manager Fernando Sanchez said their team was very understanding of the situation and eager to step up to the plate to help out.

“We were ecstatic to help the coach get his truck back into tiptop shape,” Sanchez said. “We were happy to help when Safelite gave us the call to let us know they were doing the glass and to ask us to do the body.”

Laugel said he was thankful not just to Northeast Customs Collision but also to Safelite technician Greg Dunway, painter Jesus Alvarez, interior detailer Mobile Eco and its owner Raul Rivera, and BlueBonnet Ford’s Karen Nance for their help on the coach’s truck.

“It’s a great community, and these good people came together to make this happen,” Whittle said.

Upon receiving his truck, Moczygemba was surrounded by his baseball players, school administrators, his parents, the team from Northeast Customs Collision and employees from Safelite.

“I don’t even know what to say. So many people reached out to me after to tell me they were sorry it happened,” Moczygemba said. “When Safelite reached out, wanting to help I was so thankful.”

The coach recalled the incident which happened while he was out of town for a tournament in Laredo.

“I parked my truck in a spot I normally never even park it,” Moczygemba said. “I even thought about asking my wife to pick it up but we have two little ones so I figured it would be fine.”

“I can tell you what, I won’t be leaving this truck here again,” he said with a laugh.

Moczygemba said the community has come around him after the incident and he is thankful to the people of New Braunfels and San Antonio.

“Everyone’s been wanting to help; there are 10 good people out there for every bad person,” he said.

Senior centerfield Payne McKay said the team feels so happy for its coach.

“People coming together to help out our coach, that’s actually helping out the whole team, and we appreciate that,” McKay said.

Moczygemba’s mother Laurie and father Jeff came to congratulate their son on his fixed up truck.