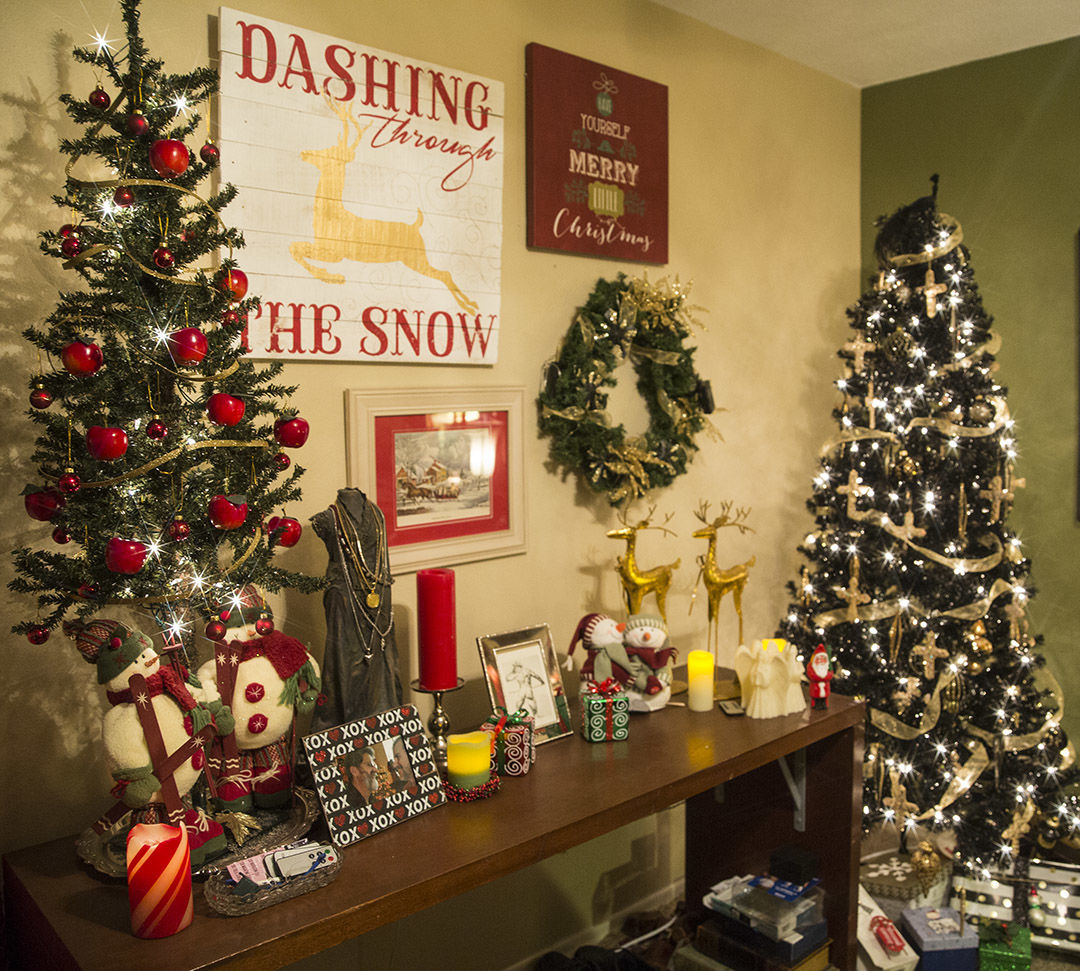 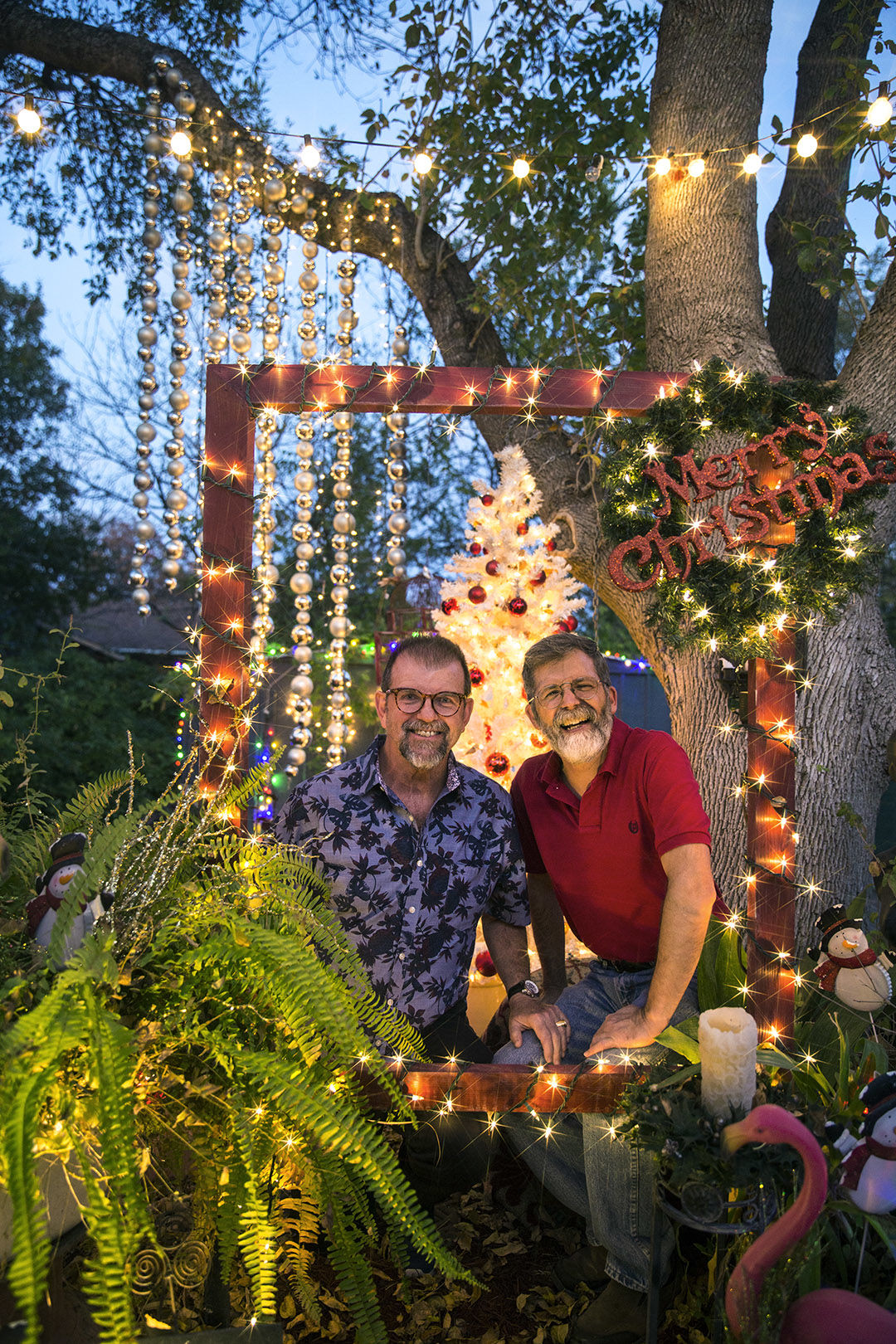 Steve Manuel and his partner, Jon Fish, at their home on Thursday, Dec. 5, 2019. MIKALA COMPTON | Herald-Zeitung 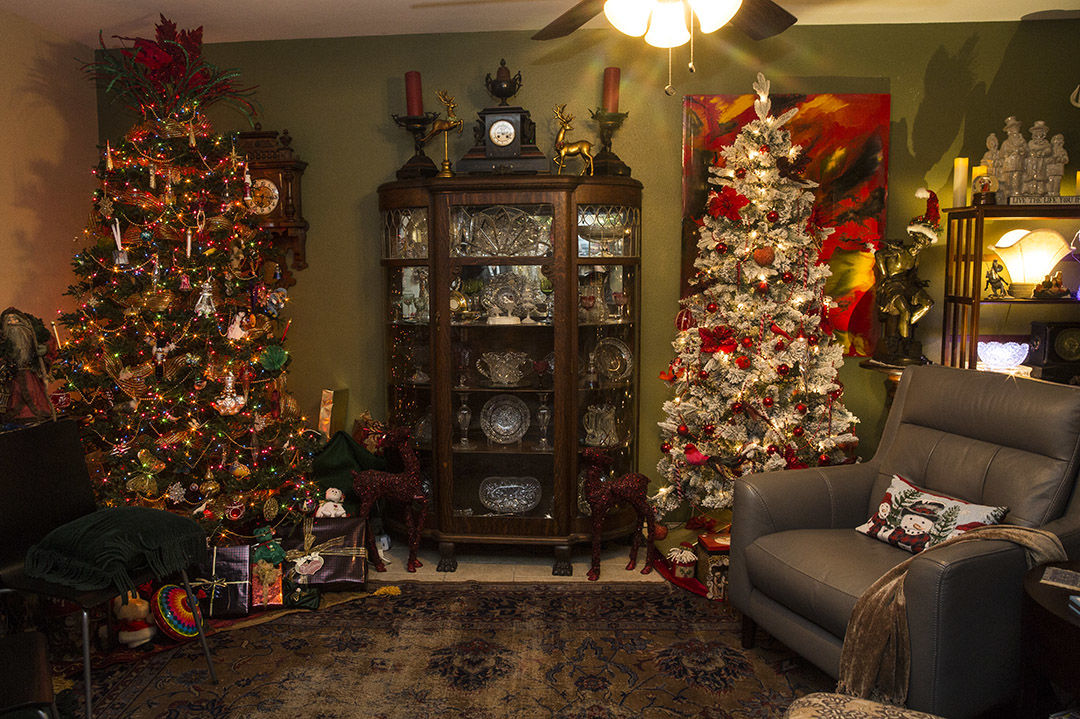 Steve Manuel and his partner, Jon Fish, at their home on Thursday, Dec. 5, 2019. MIKALA COMPTON | Herald-Zeitung

Growing up, Manuel always got to help decorate the family tree, and a separate tree just for his birthday. It was this early connection with Christmas that Manuel said started his collection of holiday décor.

Driving past his duplex home on Royal Crest, News Braunfelsers will see it decked out in twinkling red lights, covered with silver ornaments and decorated with sparkling tinsel.

Inside the home are more than 30 Christmas trees, each uniquely themed, color coordinated and varying in height. From an evergreen tree covered in glittering platinum crosses to a smaller tree covered in apples, Manuel’s two-bedroom home is a winter wonderland.

Just beyond dozens of fragrant mini muffins being baked in the kitchen by Manuel’s partner, Jon Fish, the backyard is even more stunning than the front.

A hammock swings in the wind covered in rainbow lights. From the tallest tree in the yard hang strings of silver baubles. A large red frame outlines an area for taking photos, and a glittering crystal punchbowl sits on a table awaiting use.

“I started putting everything together and getting ready to set it all out in October,” Manuel said, smiling. “I inherited a lot of this stuff from a friend who died not too long ago, a lot it was his.”

The decorations serve partially as a memorial to his friend, Gene, who passed away in August of 2018, Manuel said.

Manuel has lived in New Braunfels about eight years, and said while he formerly had an equally grand collection of Christmas décor, he gave a lot of it away to his children about nine or 10 years ago.

“So I kind of started over when I moved to New Braunfels,” Manuel said. “Apart from inheriting a lot of it, I’ve bought stuff from Hobby Lobby, At Home, Tuesday Morning, stores like that.”

In 2010, Manuel recalls living along the route for the Detour of Homes, which is what started his tradition of decorating above and beyond.

“I just loved the work to get ready for the tour,” Manuel said. “This year we wanted to decorate our place for our big Griswold Christmas Open House party.”

With his halls completely decked in Christmas lights and decorations, Manuel said he had to find a way to make sure not to blow all his circuits when plugging them all in.

“It was like Chevy Chase the first time I did it,” Manuel said jokingly. “I put the plugs together and poof.”

Finding the right combination took a little time, he added on.

“This is my first time to decorate this fully in about three years,” Manuel said. Despite the thousands of twinkling lights, Manuel said his electricity bill actually wasn’t bad at all.

“Hardly even much bigger than usual,” he said.

A former chef and widower, Fish said he’s looking forward to the party, which he and Manuel have invited over 250 people to.

“We’re hoping to get about 100 or so,” Fish said. “We’ve been cooking and baking for a few days now in preparation.”

Manuel said he hopes folks who see the lights and decorations feel cheered by their glistening presence and that it puts them in a Christmas mood.

“We love it here in New Braunfels, where there’s so much holiday spirit,” Manuel said.