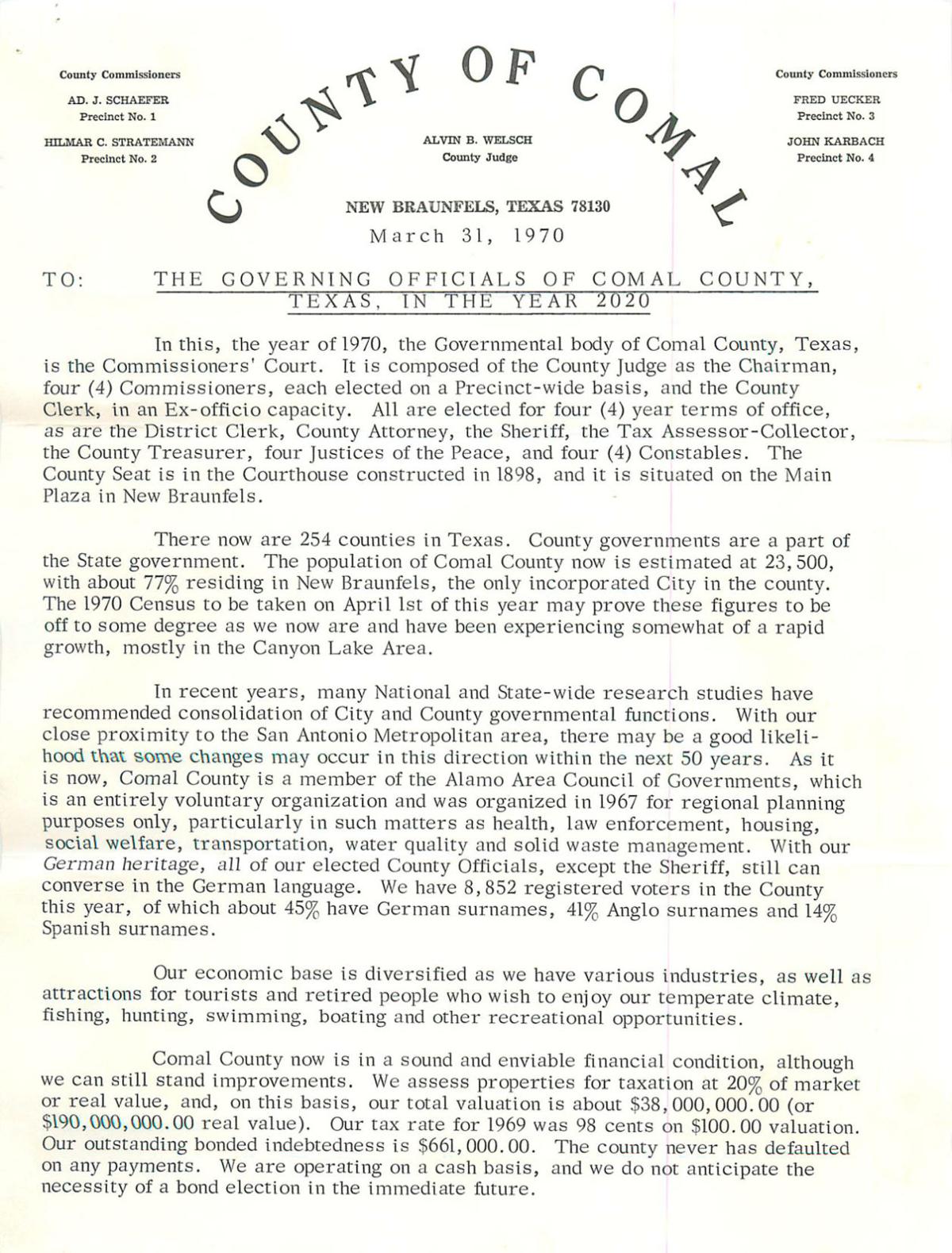 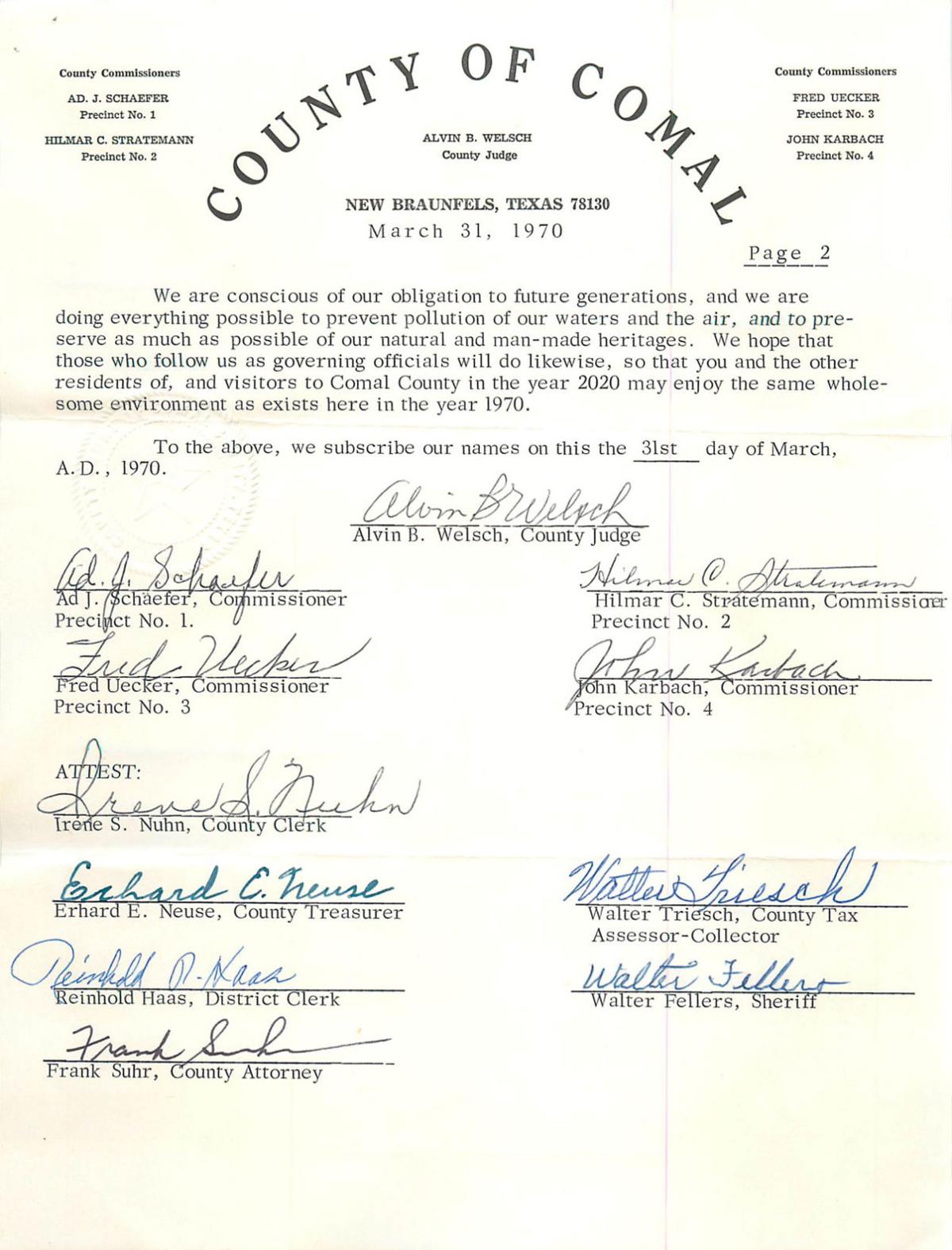 Comal County Judge Sherman Krause read a letter to commissioners that their predecessors placed in a time capsule 50 years ago.

“The population of Comal County now is estimated at 23,500, with about 77% residing in New Braunfels, the only incorporated city in the county,” Krause read Thursday from a letter signed by then-County Judge Alvin Welsch and elected county officials in 1970.

The missive, placed in a time capsule as part of the city of New Braunfels’ 125th anniversary, was unsealed and read aloud by Krause, a welcome break from dealing with local impacts of a worldwide pandemic.

“The letter talked about the population, the number of registered voters (8,852 compared to 108,000 today), just having joined the Alamo Area Council of Governments (in 1967) and how they were seeing an increase in growth,” said Paul Anthony, county public information officer.

Property taxes were 98 cents per $100 valuation. Officials believed the estimated population was higher, and anxiously awaited results from the upcoming 1970 U.S. Census.

“It may prove these figures to be off to some degree, as we now are and have been experiencing somewhat of a rapid growth — mostly in the Canyon Lake area,” it said.

“They thought that growth might be tenuous,” Anthony added of the letter, which stated “all of our elected county officials, except the sheriff, still can converse in the German language.”

The document, addressed to “The Governing Officials of Comal County, Texas, in the Year 2020,” ended: “We are conscious of our obligation to future generations and we are doing everything possible to prevent pollution of our waters and the air and preserve as much as possible of our natural and man-made heritages,” and extended the same hopes for county officials, residents and visitors in 2020.

“They talked about growth being a challenge, even then,” Krause said. “I thought it was a great letter. It has prompted us to write a letter for the city’s 175th (next March), addressed to county officials 50 years from now that will include the 1970 letter.”

“It’s the highest opinion you can receive from an independent auditing firm,” Jeremy Barbatto, manager of the San Antonio-based auditing firm of ABIP P.C., said to commissioners.

The Texas Local Government Code requires counties to produce a set of audited financial reports each year. The Comal County auditor’s office prepares the annual report, which is reviewed by an external accounting firm. ABIP examined the report for the 2019 calendar year and found the statements presented fairly in accordance with generally accepted accounting principles.

“Comal County works every year to ensure our budget process is transparent and leaves the county in a sound financial position,” Auditor Jessie Rahe said. “This report affirms those efforts.”

Last August, commissioners approved a $72.96 million general fund budget as part of an overall $110.91 million 2020 budget. The 2021 budget approval process is underway. The county’s 2019 report will soon be available at co.comal.tx.us/Transparency_Financial.htm.

After meeting in executive session, Krause and commissioners voted 4-0 to terminate Mike Lee as the county’s information technology director. Precinct 4 Commissioner Jen Crownover recused herself from the vote; no explanation followed the action.

• Accepted road and drainage improvements for roads in five sections of the Veramendi development; roads into the county road system for maintenance; executions of various improvements within public right-of-way and releases of associated surety bonds.

• Line-item budget transfers to fund bulletproof vests for the Precinct 3 constable’s office ($5,600) and purchases of projectors used by the CCSO and jail administration ($2,000).

Due to technical problems, video and audio was unavailable until the end of Thursday’s meeting. For more, visit www.co.comal.tx.us/agenda.htm.