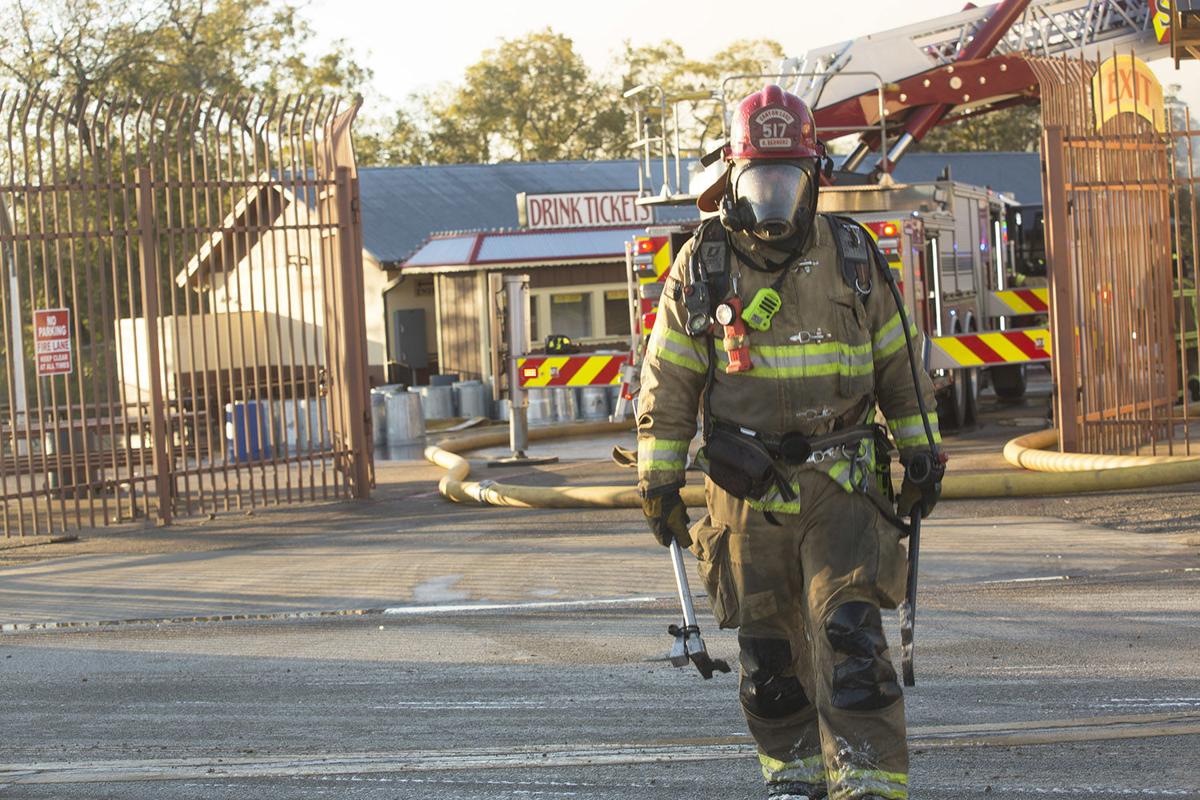 A Canyon Lake firefighter exits the Wurstfest grounds by Gate 1 Friday morning. Fire crews from Cibolo, San Marcos, Schertz, New Braunfels, Seguin and Canyon Lake were working together to put out a blaze called in around 6:03 a.m. 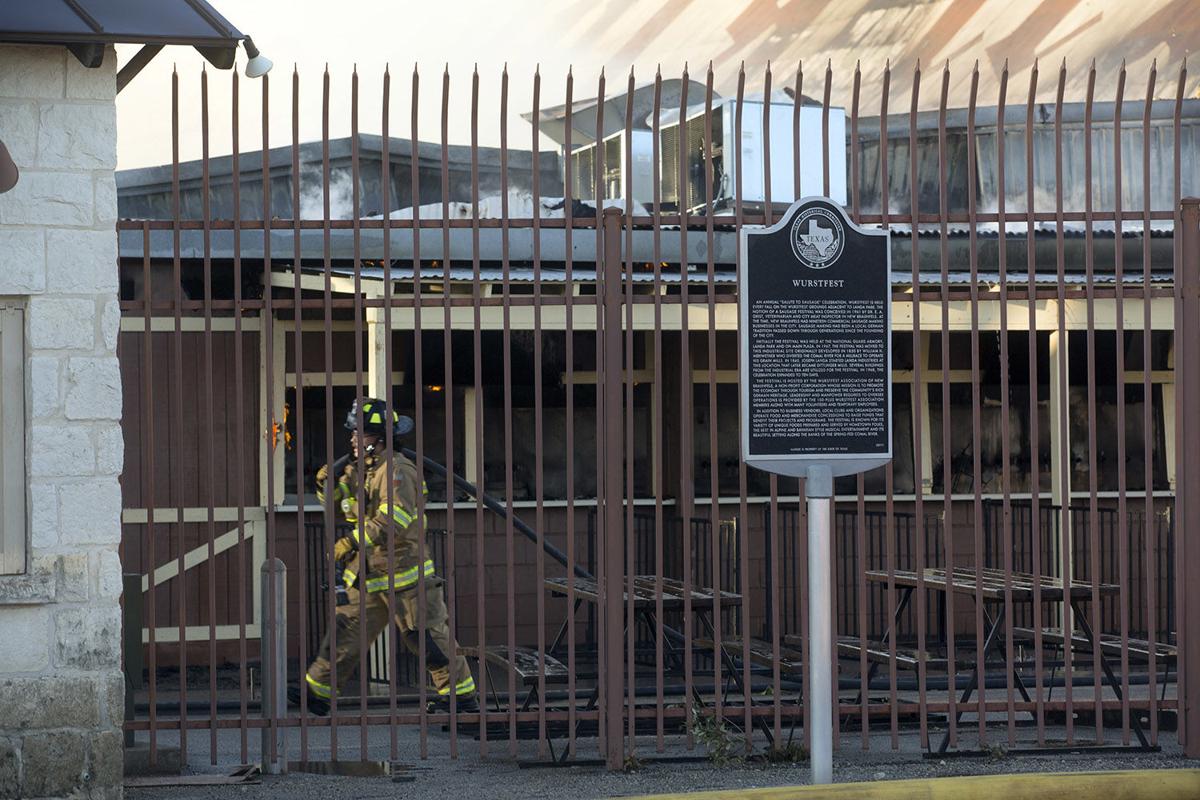 A firefighter drags a firehose around the side of the Marktplatz. The Marktplatz was officially declared structurally unsound around 8 a.m. Friday morning after suffering fire, smoke and heat damage.

Officials on Friday were optimistic that Wurstfest, New Braunfels’ signature event, will go on as scheduled next year after the blaze that blackened portions of the Marktplatz and Wursthalle within an 18-hour period.

“We don’t know yet what caused this fire,” said San Marcos Fire Marshal Kelly Kistner, director of Wurstfest safety and security, during an early afternoon news conference Friday. “The fire is being investigated and as soon as we have more information we will let you know.”

Fire inspectors were sorting through debris to figure the cause of the fire, which was believed doused Thursday night but re-ignited Friday morning.

“The first fire, which had spread into the roof and attic structure, was quickly extinguished,” he said. “This morning firefighters encountered flames coming from the roof of the Marktplatz structure, and additional manpower was called in from surrounding agencies to attack that fire.

“At this time, the fire is now out and crews are looking for hot spots and additional flare-ups,” he said, adding damage to the Marktplatz was ‘extremely extensive,’ with damage to the Wursthalle far less extensive.

NBFD received the call on the first fire at 7:18 p.m. Thursday. Fire Chief Patrick O’Connell said it originated in a vendor booth next to the Rotary Club booth. He said crews worked the scene by cutting a hole in the roof to let out the flames and heat. The fire was confirmed active at 7:37 p.m. and crews had it under control by 7:45 p.m. O’Connell said. Damage, estimated at $50,000, was contained to one or two vendor booths.

Friday morning’s fire was much more serious. Aerial views showed the Marktplatz roof caved in spots, soot had poured from air filters atop the Wursthalle’s iconic yellow roof emblazoned with the ‘Wurstfest’ name.

Ferguson said the Comal River was temporarily closed. Roads bordering the Wurstfest grounds, including Hinman Island Drive, Elizabeth Avenue and Landa Park Drive, were closed to traffic and could remain closed over the next few days as the investigation continued.

“That investigation is only just now beginning,” he said, adding it will include members of the city fire marshal’s office, state fire marshal’s office and the U.S. Justice Department’s Bureau of Alcohol, Tobacco, Firearms and Explosives (ATF), called in mostly due to the historic nature of the fire.

“We’re sure we’re going to be able to reopen next year due to the resiliency of the Wurstfest Association, the community and the people here,” Kistner said. “We’re going to work together and we’re positive that we’ll be back for that 60th anniversary, part of the city’s 175th birthday celebration.”

Wurstfest began as a small downtown festival in 1961, conceived by local veterinarian and city meat inspector E.A. Grist as a salute to the city’s German sausage making tradition, according to a Texas Historical Commission marker near the event’s Elizabeth Avenue entrance.

The city’s “10-day Salute to Sausage,” which blends foods and musical entertainment, moved to its 116-acre site off Landa Park Drive in 1967, and is the largest annual fundraiser for local clubs and nonprofit organizations’ charitable activities throughout the community.

“My heart goes out to all of the nonprofits that are the backbone of the festival,” Mayor Barron Casteel said. “I know that Wurstfest will re-open on Nov. 6, 2020 and those 10 days are the lifeblood of all of our nonprofits and service organizations in this community and the charitable works they do . . . I know the festival will be there to support their mission.”

“I know the citizens and those organizations took a hit today, but we’ll re-open for what represents the 60th year of Wurstfest in what will be the 175th year of our community.”

Added District 73 State Representative Kyle Biedermann: “Barbi and I are sending prayers to the Wurstfest Association and the city of New Braunfels, as well as thank the first responders for fighting the massive fire on the Wurstfest grounds.

“Wurstfest is a tradition like no other, and we are saddened by the tragic damage.”