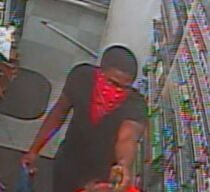 A Cibolo woman is dead after being shot during an armed robbery in Garden Ridge, and police are asking for the public's help in finding the suspect.

In a release, Garden Ridge Police Department said that at about 3 a.m. on July 29, a male armed with a handgun entered the EZ Mart location in the 19500 block of FM 3009 in Garden Ridge. The male then shot the female clerk and fled the scene with an undisclosed amount of cash and lottery tickets, police said. The clerk died at the scene as a result of her injuries.

The victim has been identified as 40-year-old Pollyanna Smotherman of Cibolo. Next of kin has been notified.

The suspect is described as a black male in his 20s to 30s wearing a black shirt, dark pants and a red bandana-style face covering. The suspect was also seen carrying some type of tote bag.

Any information relating to this crime should be reported to the Garden Ridge Police Department at 210-651-6441 or Comal County Crime Stoppers.

Anyone with information relating to this crime could be eligible for an increased cash reward of up to $10,000 for 30 days only expiring on Aug. 28, 2020. To submit an anonymous tip, contact Comal County Crime Stoppers.

Use the Mobile App: Download the “P3 Tips” app for iOS or Android mobile devices and submit a tip through the app.

Should be easy to find... he's wearing a mask.