The order, required under Texas Commission on Environmental Quality guidelines, notifies customers to boil their water before consumption, which includes drinking, hand and face washing, brushing teeth and similar activities.

NBU said children, seniors, and those with weakened immune systems are particularly vulnerable to harmful bacteria, and all customers should follow these directions.

To ensure the destruction of all harmful bacteria and other microbes, water for drinking, cooking and ice making should be boiled and cooled before use for drinking water or consumption purposes.

The water should be brought to a vigorous rolling boil and then boiled for two minutes. 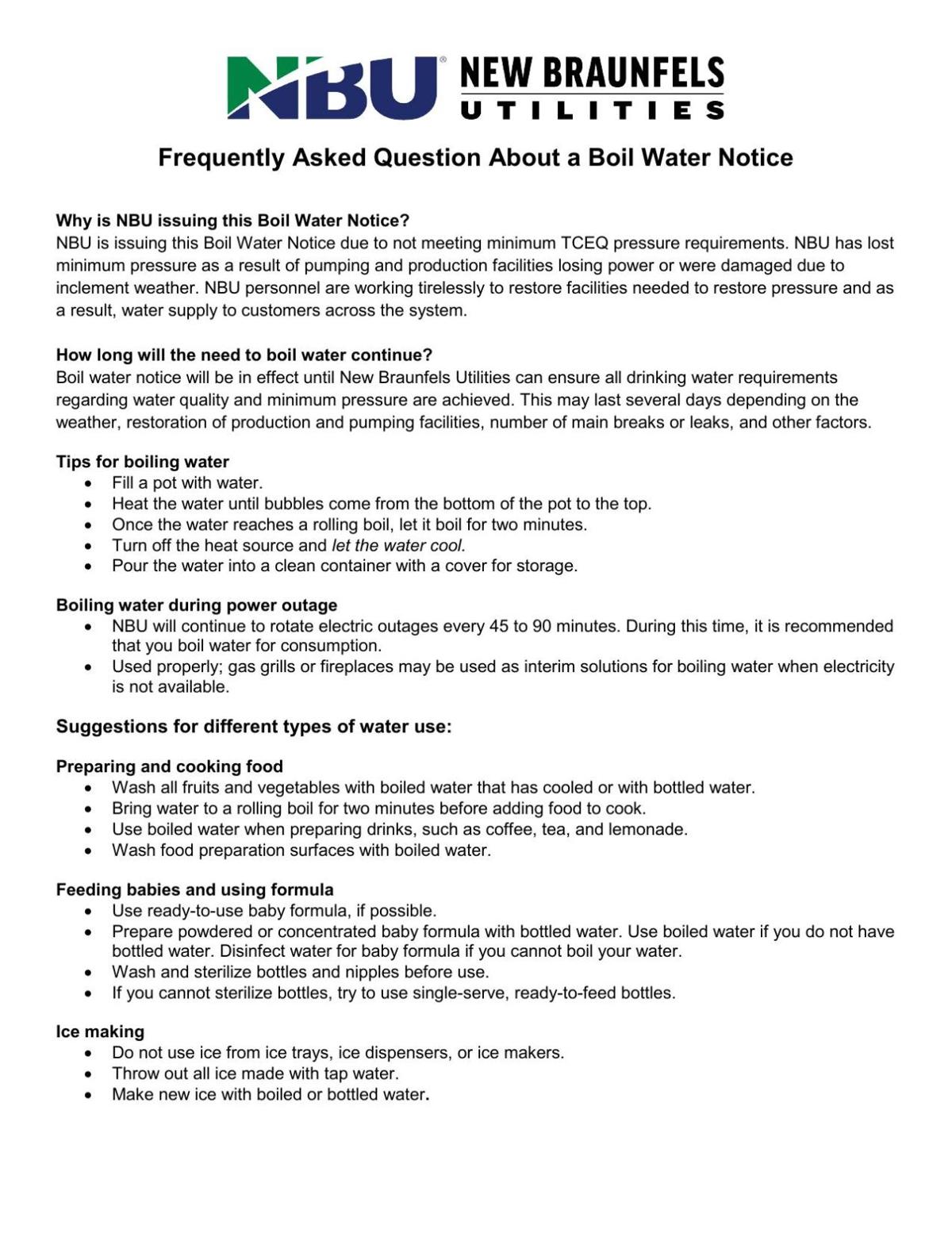 People may use bottled water or obtain water from some other suitable source, but NBU officials say they know that won’t be easy with electrical outages and road conditions closing many stores.

“Used properly, gas grills or fireplaces may be interim solutions for boiling water when electricity is not available.”

System officials will notify customers that the water is safe when it is no longer necessary to boil.

The utility is asking people to share this information with all the other people who drink this water, especially those who may not have received this notice directly, such as people in apartments, nursing homes, schools and businesses.

Water system demands are currently at summertime levels, and they are outstripping the utility’s pumping capacity.

NBU said it’s unclear what’s causing these high water demands, but officials hope if customers lower water use to normal winter levels, pumps will be able to keep up.

Officials also said they believe main breaks might be causing high demand. They recommend customers call 830-608-8800 if they see water running down the street.

NBU is also asking customers to turn off irrigation timers as well as turn off dripping “in-home” water faucets.

“Since this crisis began, NBU has had an all-hands response,” NBU’s press release stated. “Our employees are on 24/7 operations giving

everything they have. We are working around the clock to diagnose and repair water, wastewater, and electric issues. We are pouring tremendous resources into rotating electric outages to maximize power to every customer every day, given the extraordinary electric load shed obligations that have been placed on us.”

Officials with the Canyon Lake Water Service on Wednesday morning said its crews continued to work to restore water in their service area.

On Tuesday, it issued a precautionary boil water notice for its customers in Comal and Blanco counties.

The Electric Reliability Council of Texas, the agency that manages the electric grid for 90% of the state, declared a third-level energy emergency alert early Monday and instructed NBU and transmission companies throughout the state to begin rotating power outages as there was not enough power available to keep up with consumer demand.

ERCOT officials on Wednesday said it was still struggling with balancing supply and demand to the Texas power grid and could not project when outages would end.

During a press conference Wednesday morning, President and CEO Bill Magness and Senior Director of System Operations Dan Woodfin stated the state’s power grid would slowly be restored as the weather becomes warmer.

More than half of the ERCOT’s winter generating capacity, largely powered by natural gas, was offline due to the winter storm, an estimated 45 gigawatts, according to Dan Woodfin, a senior director at ERCOT.

NBU on Wednesday continued to ask customers to conserve energy.

They are asked to turn off non-essential lights and electric appliances, lower the thermostat to at least 68 degrees, limit hot water use, and avoid using appliances with high consumption, such as washing machines and dryers.

NBU said the utility aimed to keep outages to 60 minutes and warned it could be longer.

NBU has received a record number of inquiries due to the storm, officials said.

Customers should continue to report outages by calling 830-629-4628 or text #OUT to 85700 if they are enrolled in text notifications.

The New Braunfels Police Department and other law enforcement agencies have asked residents not to call 9-1-1 for outage updates.

NBU officials added that an additional factor affecting the restoration of power after a rotating outage was the in-rush electrical demand that occurs when power is restored.

In electrical outages, NBU recommends turning the heating unit off or turning the temperature down to reduce the immediate draw of power by electrical devices upon restoration of power.

Customers can view an online NBU outage map at outages.nbutexas.com.

Winter wipeout: Schools close for the rest of the week, city and county closed on Thursday