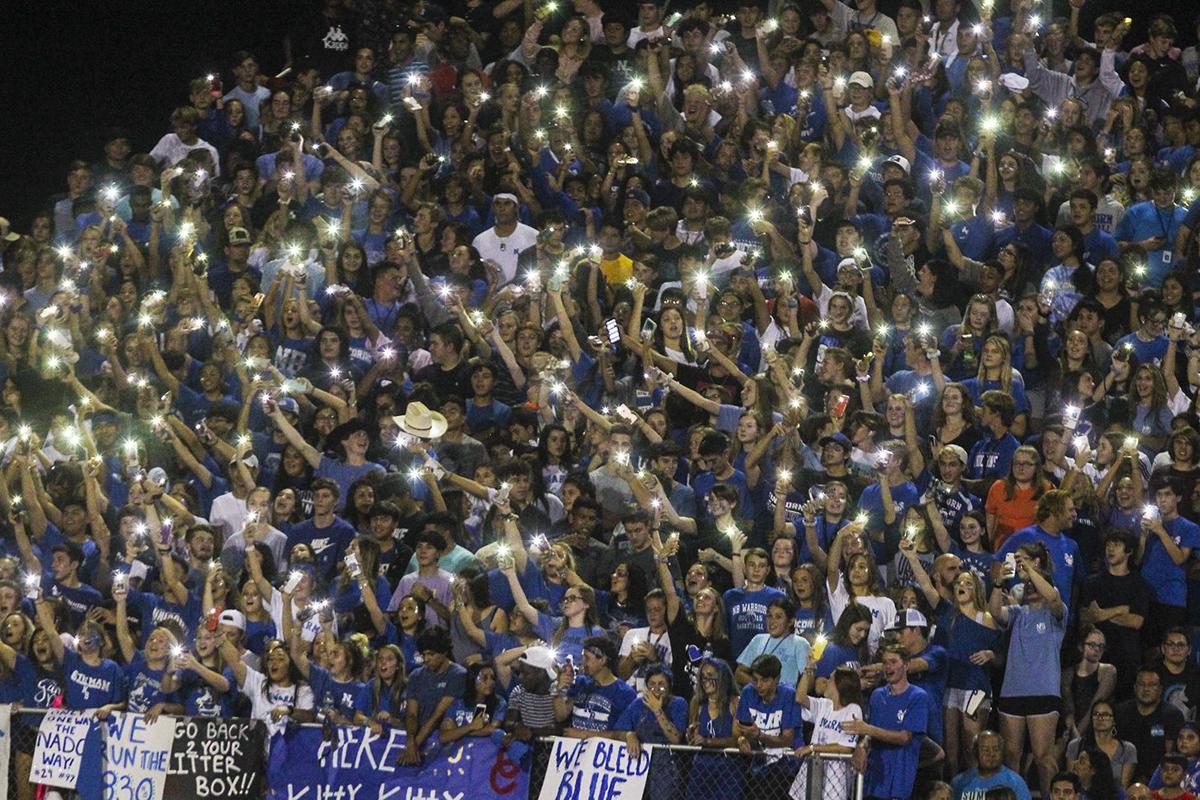 New Braunfels High School light up the stands as they cheer for the Unicorns during the Wurst Bowl on Friday, Sept. 20, 2019. 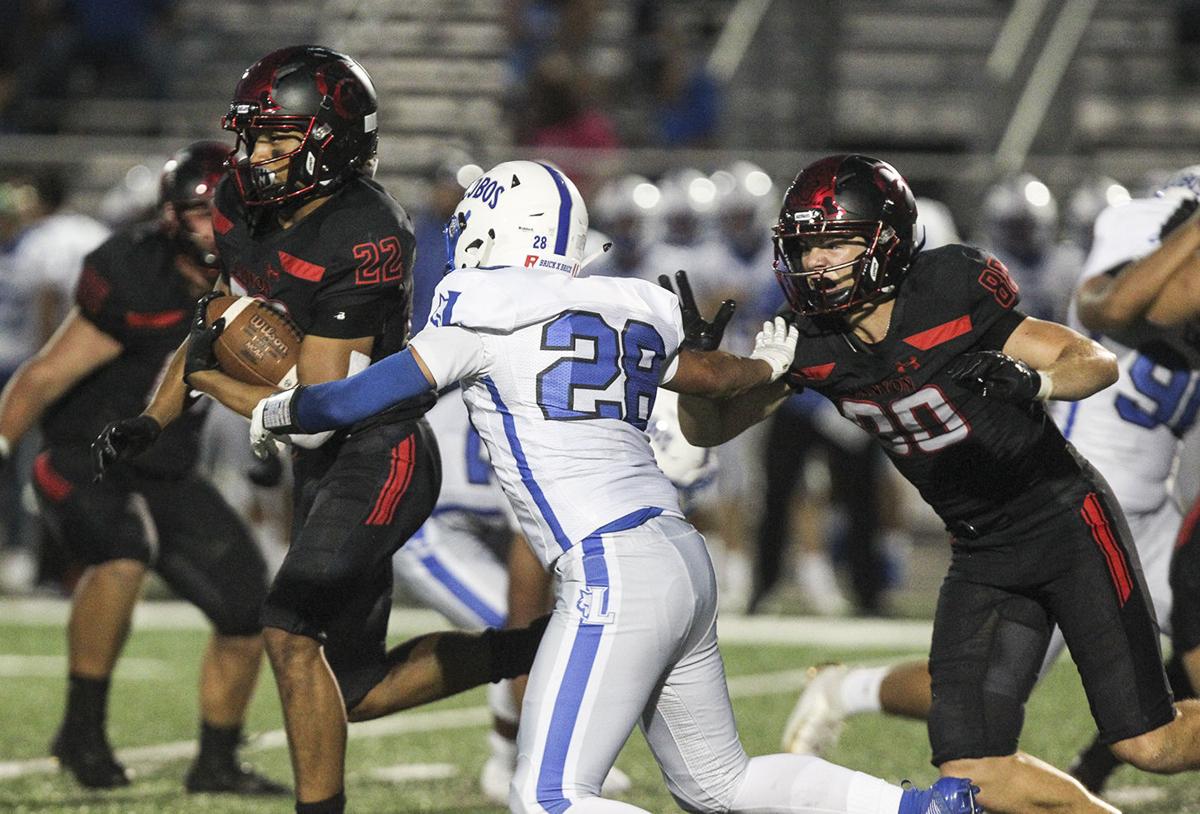 Canyon runs the ball forward during the game against Lehman on Friday, Aug. 30, 2019.

New Braunfels High School light up the stands as they cheer for the Unicorns during the Wurst Bowl on Friday, Sept. 20, 2019.

Canyon runs the ball forward during the game against Lehman on Friday, Aug. 30, 2019.

No definitive answer has been given as to whether  stadium lights will be illuminated as usual during Friday nights this fall.

The next major target date on the calendar appears to be Monday, Aug. 3, which marks the beginning of football practice for schools that are a part of either the University Interscholastic League (UIL) or Texas Association of Private and Parochial Schools (TAPPS).

Despite the cloud of uncertainty that continues to swirl due to COVID-19, area coaches and athletic directors are approaching the upcoming season as if it’s going to take place as initially scheduled.

“I feel sure we’re going to have a season,” New Braunfels ISD athletic director Jim Streety said. “I expect we’ll hear something from the UIL by the end of this week before the Fourth (of July). We’ll hear something from TEA supposedly (June 30) and I would expect that the UIL will follow up behind that — at least that’s what we’re being told.

“That will give us, I would think, a pretty good idea of how it’s going to happen.”

High school athletics have been on hiatus ever since the UIL and TAPPS made the decision to go ahead with widespread suspensions in March. Those suspensions became full-scale cancellations in mid-April, but the UIL has since allowed extracurricular activities to resume as of June 8.

New Braunfels head football coach Glenn Mangold said that, as much as anything, student-athletes want to reunite with their teammates and return to some semblance of normalcy.

“I think everybody wants to get back to some kind of routine that they’re used to,” Mangold said. “Whether that’s going to be possible or not, we’ll see in the next month and a half, I guess. For kids, they need routine and they like routine. They miss seeing their friends and being around them and that’s tough for three months — to separate themselves from that routine.”

Since offseason strength and conditioning programs resumed on June 8 for UIL schools, coaches have had to amend their day-to-day schedules and have also implemented new rules and regulations in the name of safety. Even with those procedures in place, a case of

COVID-19 was recently reported at Smithson Valley High School and the summer athletic camps at both San Marcos and Harlandale have been suspended indefinitely.

“I don’t see this problem going away any time soon,” Mangold said. “The sad thing is you can try your hardest and do everything you’re supposed to do and it only takes one person to pass it along to somebody else and then you’ve got a whole group that’s out.”

The listed capacities of the three largest high school football stadiums in the Herald-Zeitung’s coverage area are 10,500 (Unicorn Stadium), 9,500 (Cougar Stadium) and 8,500 (Ranger Stadium), which also brings into question the number of people that will potentially be allowed in each venue as public safety concerns continue.

In an effort to ease the fears of some fans and give them an alternative to attending games in person, the UIL announced it will lift the ban on live Friday night broadcasts this season as part of a one-time exception. That decision was announced on June 17.

New Braunfels Christian Academy athletic director and head football coach Josh Wood said that the Wildcats, who play 6-man football as a TAPPS competitor, may have fewer concerns simply due to the smaller size of the rosters and the more spacious nature of the fields themselves.

“Only having 12 people on the field versus 22 on the field, that’s a big difference,” Wood said. “Not to mention, we don’t have as many people at our games. At our field and most of the fields we play in, it’s very easy for people to social distance at the games considering the majority of the fans bring their own lawn chairs. I think that’s an advantage for us as well.”

Wood said there’s been no word of any delays or further postponements handed down by TAPPS since beginning to ease their restrictions on June 1.

“There’s been zero talk from them regarding that, so TAPPS is, as far as I’m concerned, still planning on starting everything on time,” Wood said.

New Braunfels Christian and the four local UIL schools — New Braunfels, Canyon, Smithson Valley and Canyon Lake — are slated to kick off the 2020 varsity football season on Friday, Aug. 28. The brand new Davenport High School is set to begin competition at the JV level this year and has scheduled its first set of games for Thursday, Aug. 27 in Dripping Springs.

Until any further announcements are made by governing bodies, coaches and players will continue to prepare for those season openers. However, no one expects it to be business as usual.