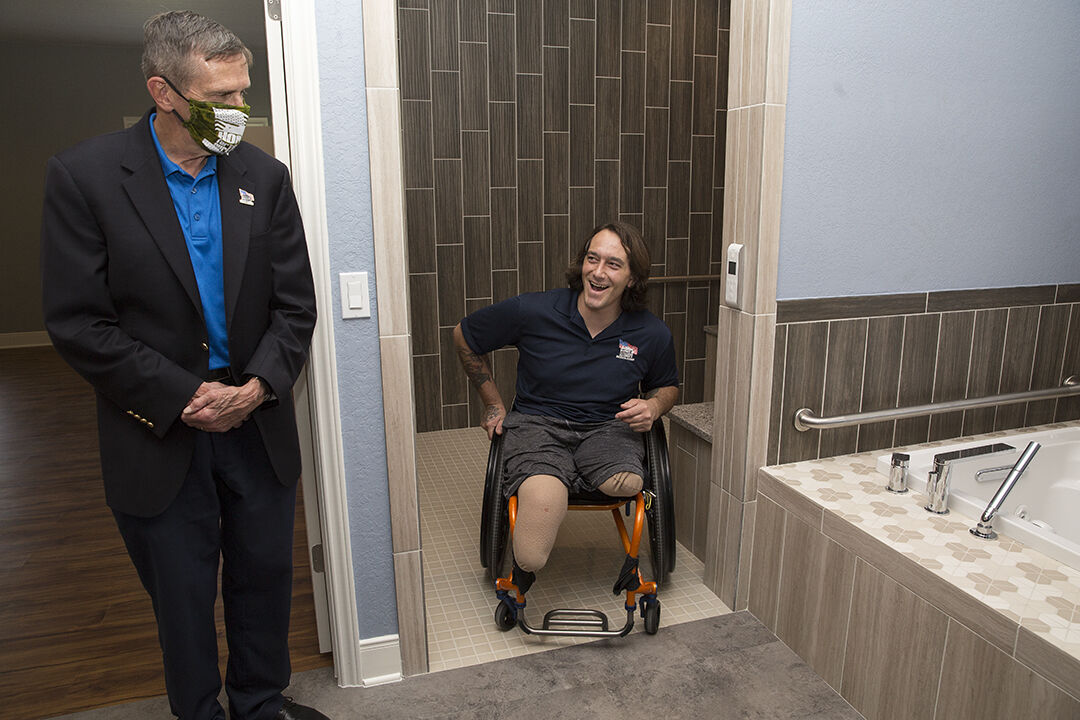 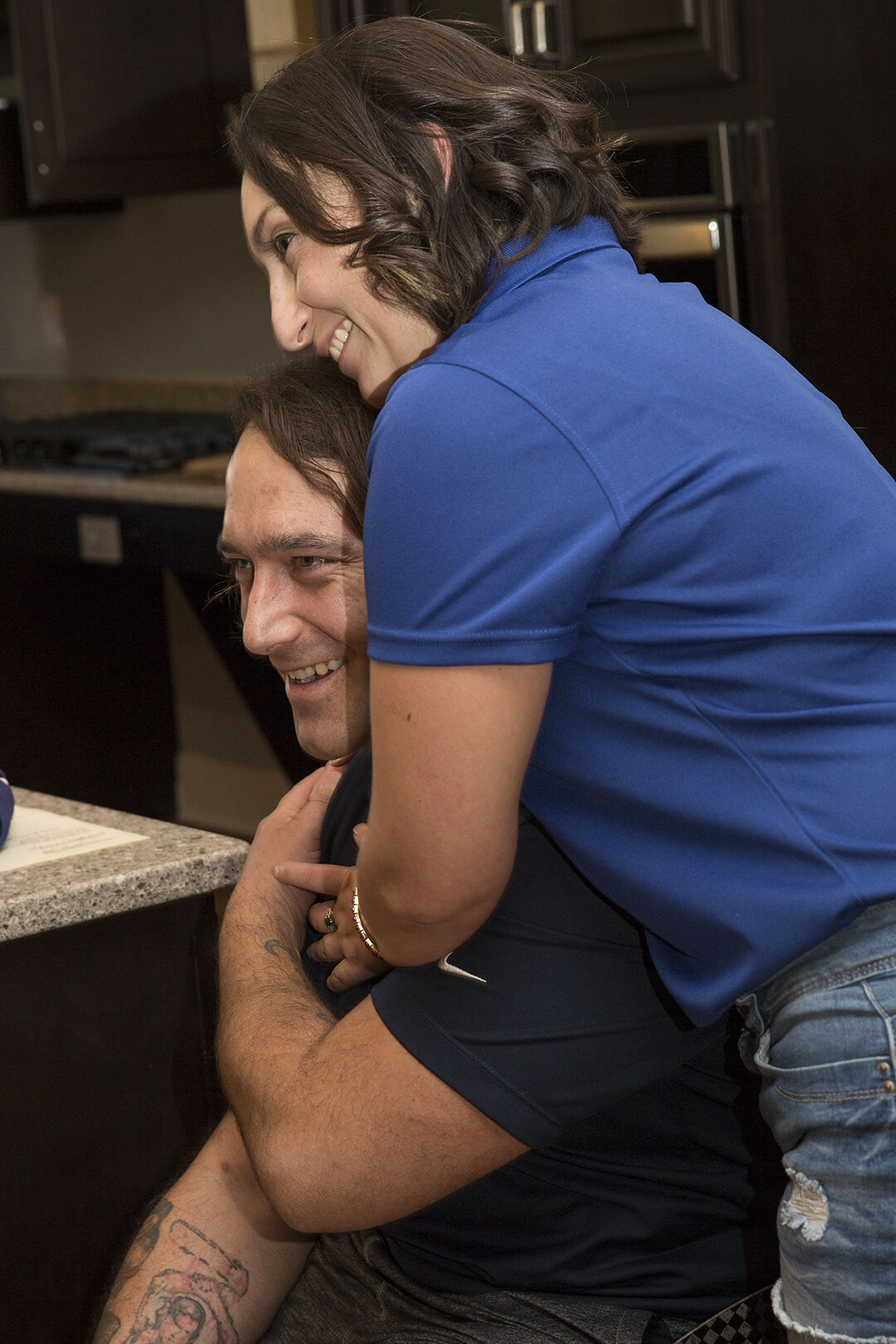 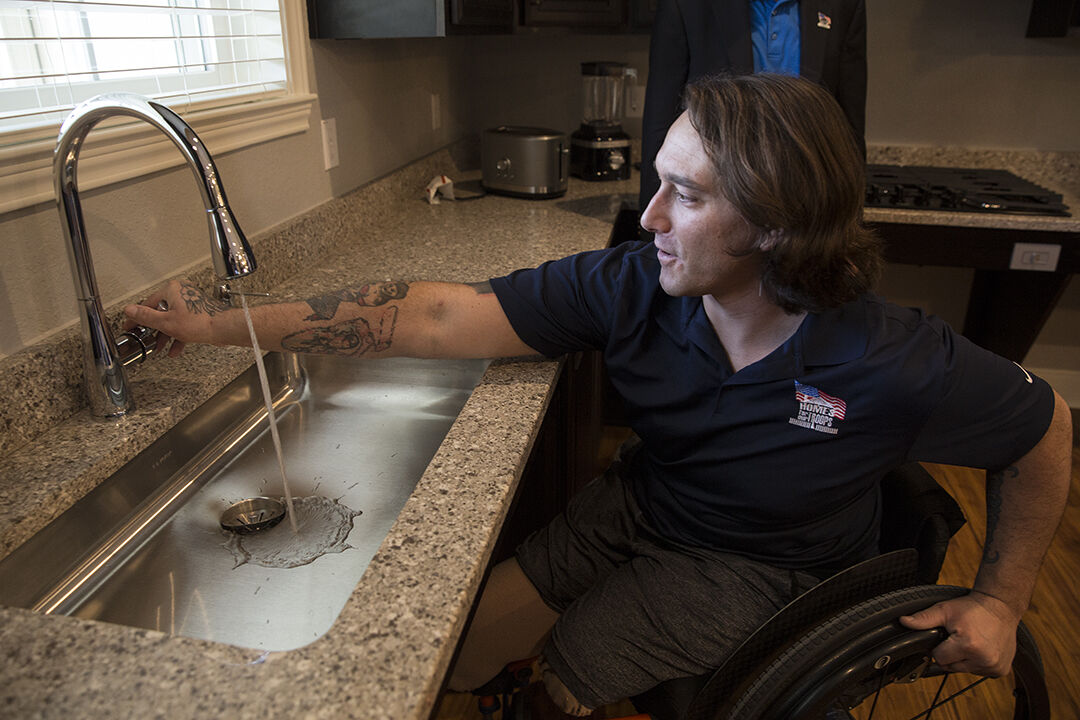 Escorted by the Patriot Guard Riders and greeted by their new neighbors, retired Army Specialist James Thorne and his girlfriend Audrey Martinez accepted a new home on Friday near New Braunfels, donated by the national nonprofit organization, Homes For Our Troops.

The Massachusetts-based organization donated the home to Thorne, thanks to contributions from donors, supporters and corporate partners.

“Because of you all, it is possible for veterans to move on and integrate into something greater,” Thorne said.

Thorne was severely injured while serving in Afghanistan.

On Oct. 8, 2010, Thorne was on his first deployment, searching for landmines with the 2nd Battalion, 502nd Infantry Regiment, 101st Airborne Division, when he stepped on an improvised explosive device in Kandahar, Afghanistan.

The blast resulted in the immediate loss of his left leg and severe damage to his right leg. Doctors later amputated the right leg two years after the injury.

After arriving back in the United States, Thorne endured 75 surgeries over a 10-month period at Brooke Army Medical Center in San Antonio.

His father, Michael, who is also an Army veteran, seldom left his son’s bedside through his entire recovery.

“My father was the one person who was there the entire time,” Thorne said. “He has done everything for me.”

During Friday’s key ceremony, Thorne also expressed appreciation for the support throughout his recovery from his mother, Elizabeth Bryant, and stepfather, Richard Bryant, both are retired Army sergeant majors.

His mother is the one who found out about the Homes For Our Troops program.

The couple also received housewarming gifts and gift cards. Thorne received an American flag that had been flown over the U.S. Capitol.

“They’ve been patient and helpful,” Martinez said of the Hopes For Our Troops organization. “They really know how to take care of veterans not just by providing them a home but by knowing what the veterans struggle with day by day.”

Now medically retired, James continues his recovery by going to the gym at least every other day, and he is currently working on getting refitted for prosthetics.

James plays guitar and plans to go to school for film production.

Thorne’s new home features more than 40 major special adaptations such as widened doorways for wheelchair access, a roll-in shower, and kitchen amenities that include pull-down shelving and lowered countertops.

The home also alleviates the mobility and safety issues associated with a traditional home, including navigating a wheelchair through narrow hallways or over thresholds, riding on carpets, or reaching for cabinets that are too high.

Homes For Our Troops is a publicly funded nonprofit organization that builds and donates specially adapted custom homes nationwide for severely injured post-9/11 veterans. Most of these veterans have sustained injuries, including multiple limb amputations, partial or full paralysis or severe traumatic brain injuries.

Since 2004, the organization has built and donated more than 300 specially adapted homes nationwide. More than 40 of those have been built in Texas.

Bill Ivey, Homes For Our Troops executive director, said rebuilding the lives of veterans is the most important aspect of the organization’s mission.

“It’s an opportunity to give back to these men and women,” Ivey said. “One of the things that makes us different is that we stay with the veteran after we get them into the home. We see how they’re doing, and if they have an issue, we can come up with another organization or entity or whoever that can help them solve what they need to rebuild their lives.”

To find out more about how to get involved or make a donation visit www.hfotusa.org.