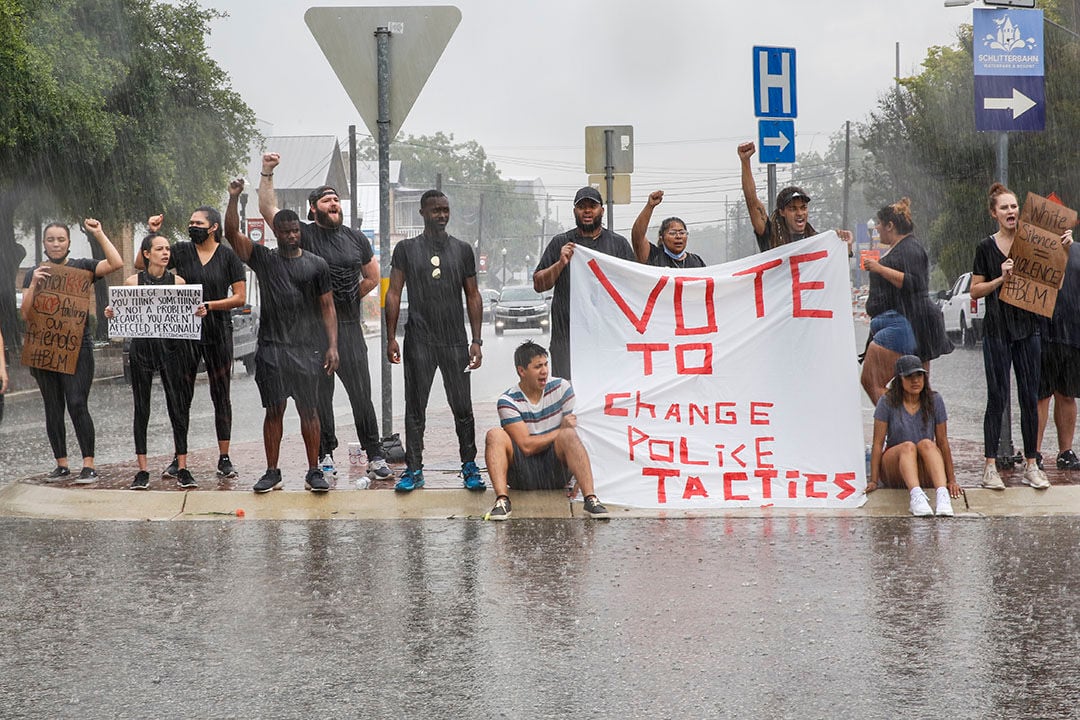 Protesters chant in the pouring rain during the Black Lives Matter protest at the Main Plaza in downtown New Braunfels on Tuesday, June 2, 2020. MIKALA COMPTON | Herald-Zeitung 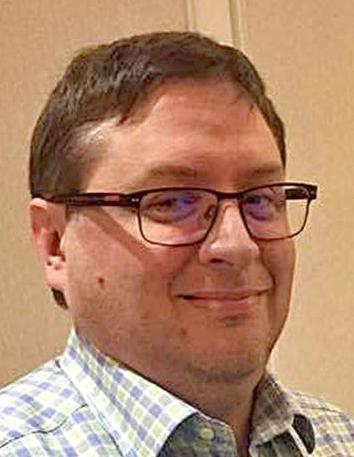 The Herald-Zeitung’s opinion page is designed to foster discussion and debate on topics in our community. Since the death of George Floyd, the topic of race has been one that several letter writers and columnists have weighed in on.

The newspaper has done the same with its own editorial.

Such a response is understandable, as Whittaker’s piece is both.

It’s also a piece that’s wrong in so many ways, while carrying echoes of white supremacist talking points that have been spoon-fed to Americans for decades.

Talking about racism is the quickest way to get some people to change the topic to violence in American cities.

It’s a reflex. Is there violence in American cities? Yes. Does it have anything to do with racism? No.

Another reflex is black-on-black crime. This is a thing that most racial groups experience because crime is typically born of opportunity or involves people you know. Nobody talks about the scourge of white-on-white crime, because it’s not about attacking crime. It’s about attacking race.

It’s a barely-concealed dog whistle attack designed to paint black people as more aggressive, more violent, more dangerous. It’s the same psychological drumbeat that echoes through our culture. It ends with black children dead for having a toy gun or wearing a hoodie in the wrong neighborhood. It ends with a black jogger dead on the side of the road.

Whittaker’s article is filled with words and phrases that echo that relentless drumbeat. Thug. Black miscreants.

It paints black communities and black people as a monolith. It’s spelled out it in the word he uses in his first sentence — “Blacks.”

Whittaker’s insistence on “All Lives Matter” is just another example of white people taking a problem in a community of color and making it about themselves. Another reflex.

“Black lives matter” doesn’t mean that other lives matter less — it means that too many place less value on the lives of black people. That there are people insisting we erase the word “black lives” from a movement started by black people speaks volumes about just how real that problem is.

So why, if I found his column so distasteful and disagreed with it so vehemently, did I choose to run it?

It’s a fair question. I wish I could say that I have a satisfying answer. I don’t.

In this job I’m put in a position of publishing a lot of opinions I disagree with. That requires setting myself aside and recognizing that people have different perspectives. Many of those perspectives are worthy of discussion and consideration.

Whittaker’s column did not reach that bar. There was nothing useful or insightful in it.

There is a way to talk about race. This wasn’t it.

In bending over backwards in pursuit of the idea of fairness, I gave a platform to a message that didn’t deserve it.

On Thursday afternoon a woman called to express her disappointment — her despair — at what she saw in her newspaper.

She’s right. And I was wrong to do so.

Chris Lykins is the executive editor of the New Braunfels Herald-Zeitung.

Looking backward and forward on Black lives and opportunities

Mark, as I read through your guest column in the Herald-Zeitung (Thursday, July 23), I found myself truly realizing why my presence here in a …

Bravo. Takes heart to do the right thing, and takes even more heart to admit a mistake + try to make it right. Thank you for doing that.

No matter my opinion, or yours sir, there are many dissenting opinions about what is going on in the world today. It worries me that because you have the power, you can mute someone who does not just because you find what they believe to be offensive. I totally agree that the content and tone WERE offensive, but should he not have been allowed to speak and be heard? Or is that "right" only reserved for those you agree with?

Charles, I can't stop him from being heard, but I'm not required to hand everyone a megaphone just because they show up. People I disagree with are in the paper all the time and will continue to be in the paper. There are also ways to talk about these types of topics. This just simply wasn't it.

Chris, I agree with you about not printing every submission, however, an editor's role is to represent voices in a community and make sure those voices are presented fairly. There are alternative perspectives to the current embrace of BLM and to the obviously failed governmental policies that have been in place for over 50 years. Those voices need to be heard, and heard in a way that does justice to the intent of the author. Not everyone is a writer and your assistance or that of your staff intervening in the Chris Whitaker submission could have helped him clarity his point, which seems to be his questioning whether BLM the 'organization' is worthy of the outpouring of support for change that it is receiving, because of the clever association of the name with our desire to see a reversal of the tragic lack of any meaningful progress improving education, safety, and economic outcomes for Black Americans. Mr. Whitaker in a reply expressed remorse in the way his column was understood, your input may well have helped him distill and clarify his comments to match what he professes was his intent to be helpful.

So Chris, you used the Monolith in your rather disturbing rebuttal and apology in publishing Whitaker’s opinion. I don’t agree with his opinion but I don’t agree with you apologizing for publishing it. VP Biden just called the African American community Monolith just last week. Will you now write about how racist he is for his racism or will you simply ignore it? I suspect the latter.

Kudos for recognizing the inappropriateness of the subject column, but more importantly, thank you for addressing some of the underlying issues, as well as the rationalizations that foster and justify this kind of thinking for many people. Racism and racists need to be called out whenever and wherever, and everyone needs to do their part in putting an end to racism. A big part of that is educating people, or at least trying to educate people, on what racism is, why it is wrong and what can be done to eliminate it. You don't have any easy job, but you clearly care and are trying to do your best. Keep up the good work.

I've had several people ask when this will be in print. It's on the page for our weekend edition.

Mr. Lykins, this was a perfect response. Thanks!

As our only professional source of local news and culture the Herald-Zeitung is an essential resource to our community. I am pleased to see it step forward to take responsibility and apologize when errors are made in editorial judgement. Thank you for the courage to take a stand for responsible speech and journalism. It is important to allow for the free and responsible exchange of ideas. However, it is of utmost importance that they be responsibly discussed.

Bravo, Chris Lykins! You are a responsible journalist and a decent man. It takes courage to admit an error, especially publicly. This is something utterly lacking in our current national leadership, so your example is bracing. I salute you, sir.

I've encouraged so many to take a second look at our newspaper when they stopped subscribing because of the divisive tone it had in the past. You're one of the reasons why we have hope now for a better, more inclusive community. It takes courage to stand up to hateful rhetoric. Thank you for speaking truth to power.

I was speechless when I read Whittaker's column. Thank you, Mr. Lykins, for admitting a mistake and for articulating so well what was so terribly wrong.

Thank you for this. I was appalled, but respect this response. Please give this space tomorrow.