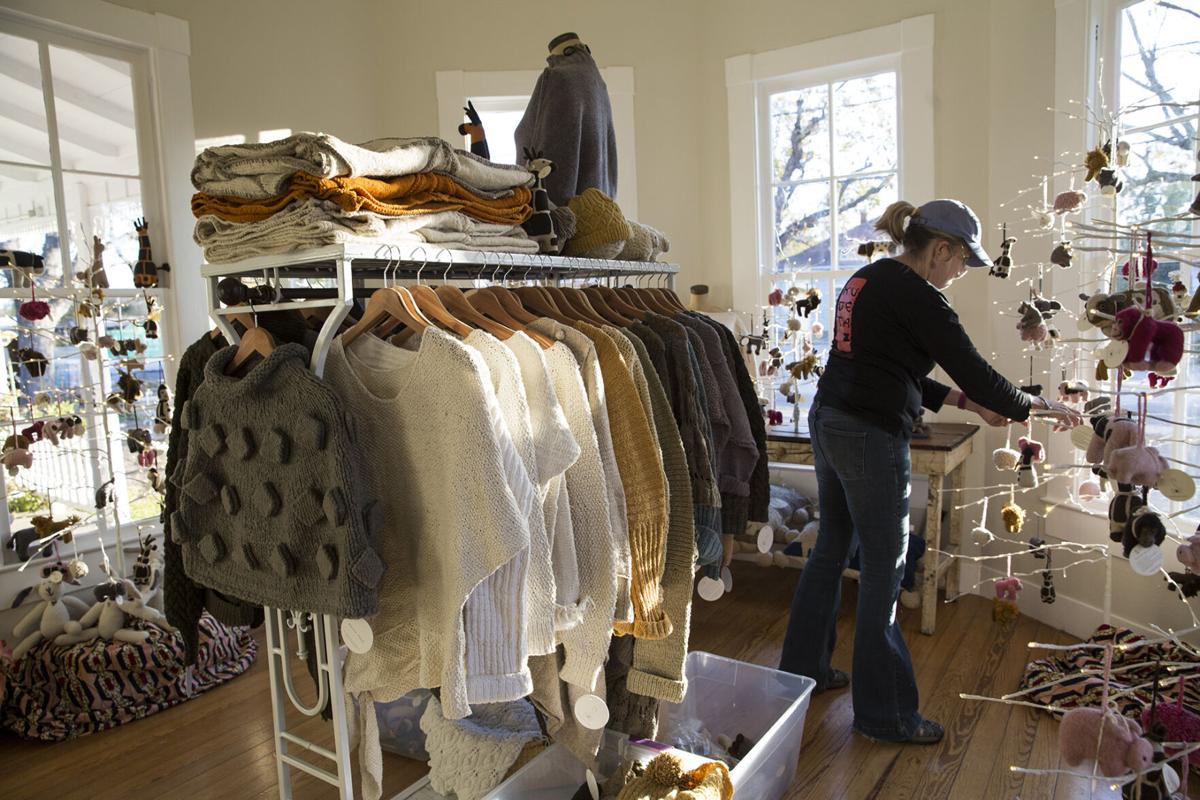 Founder and Executive Director Diana Wiley prepares the storefront for the grand opening of Handspun Hope on Wednesday, Nov. 18, 2020. The Christian nonprofit creates fair-trade jobs for women in Rwanda. The grand opening will be held Nov. 19, 20 and 21 from 9 a.m. - 8 p.m. MIKALA COMPTON | Herald-Zeitung 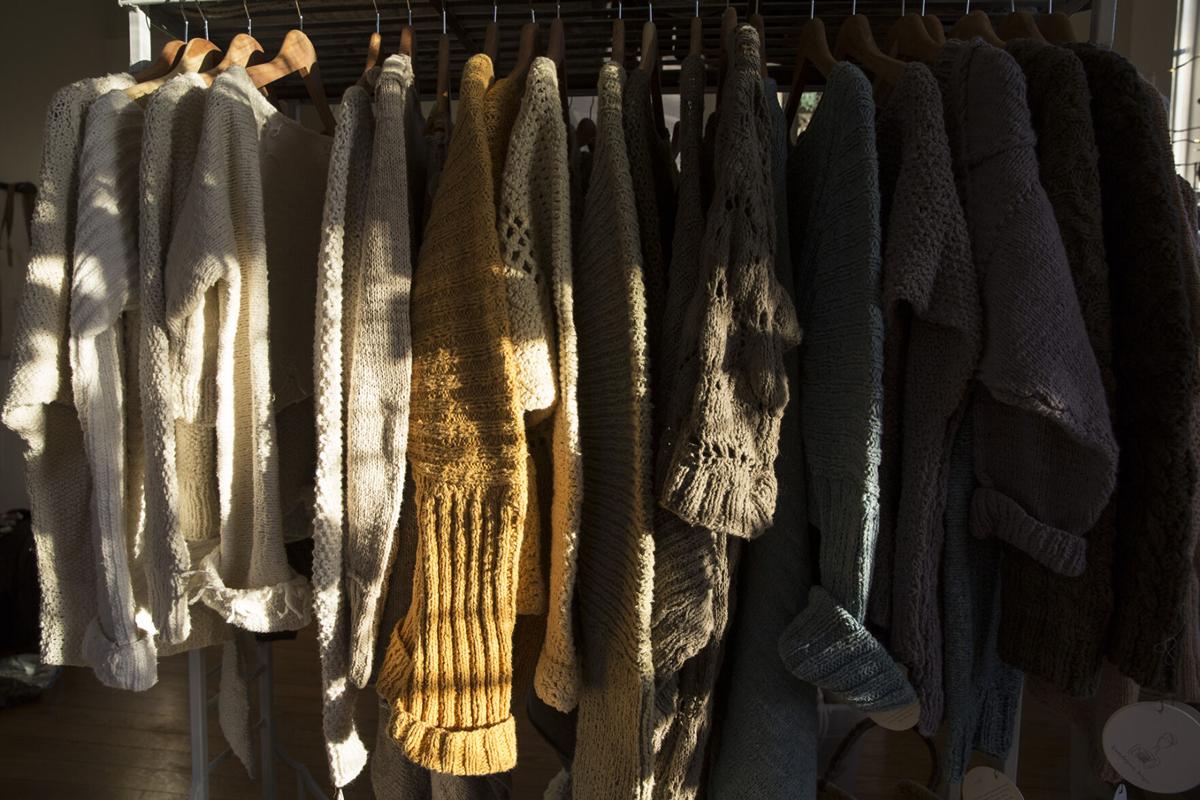 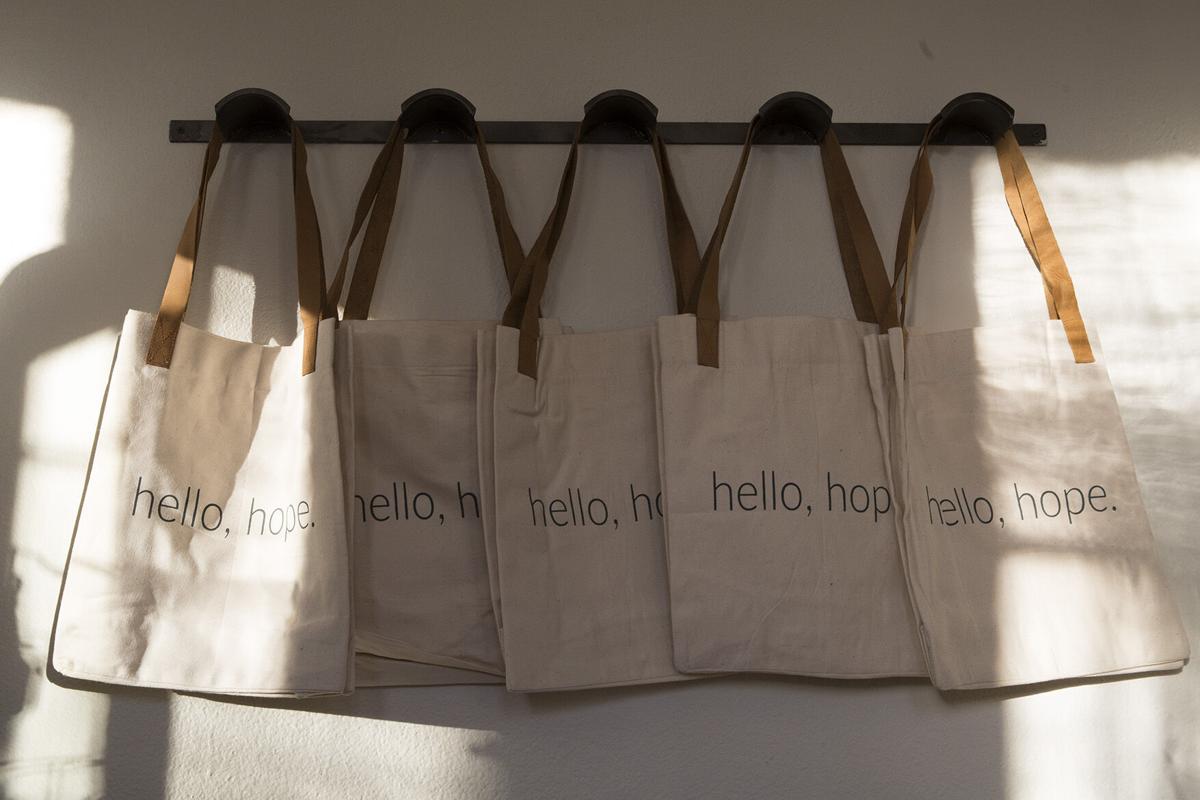 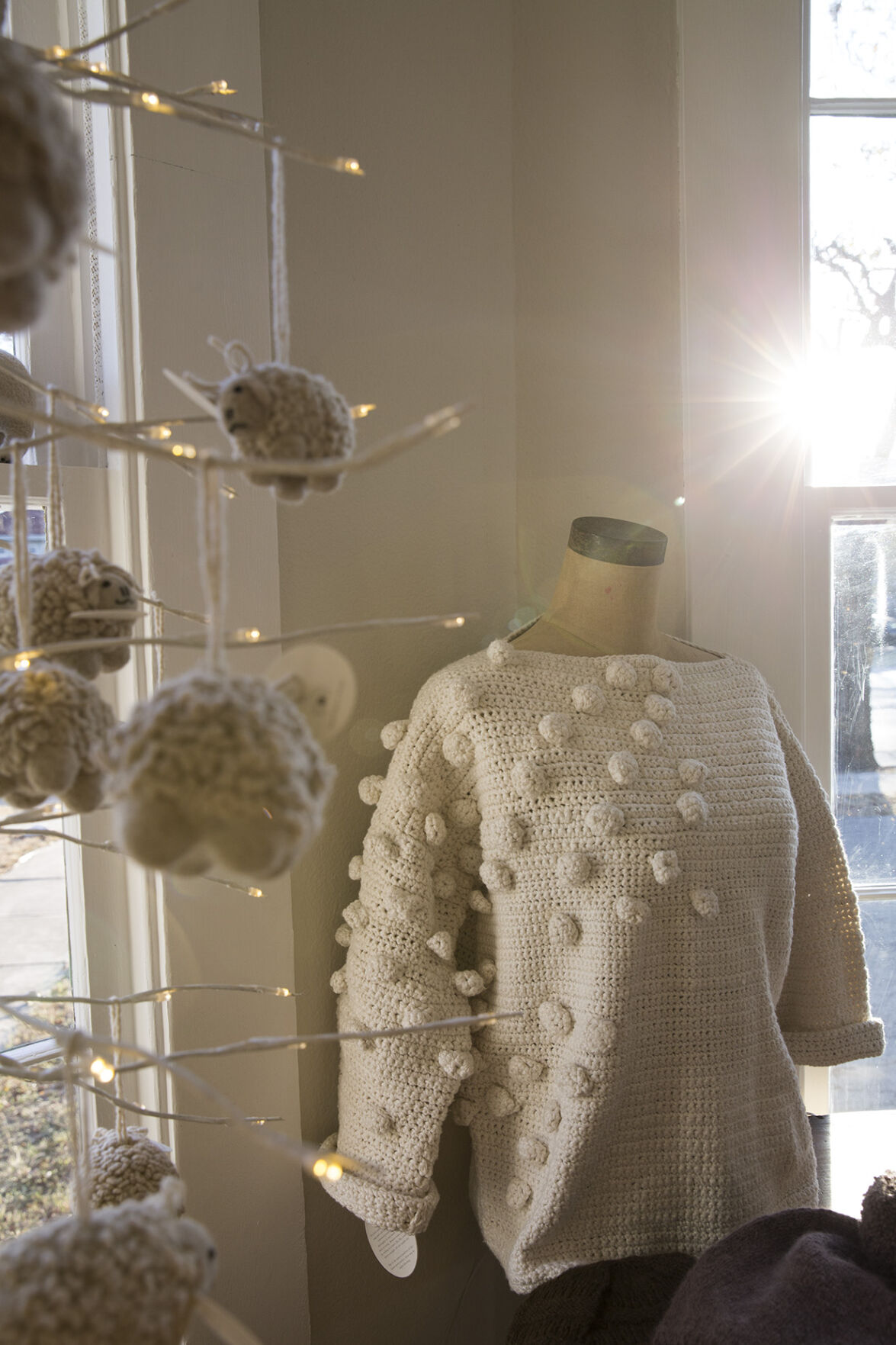 A sweater sits on display next to sheep ornaments at Handspun Hope on Wednesday, Nov. 18, 2020. MIKALA COMPTON | Herald-Zeitung 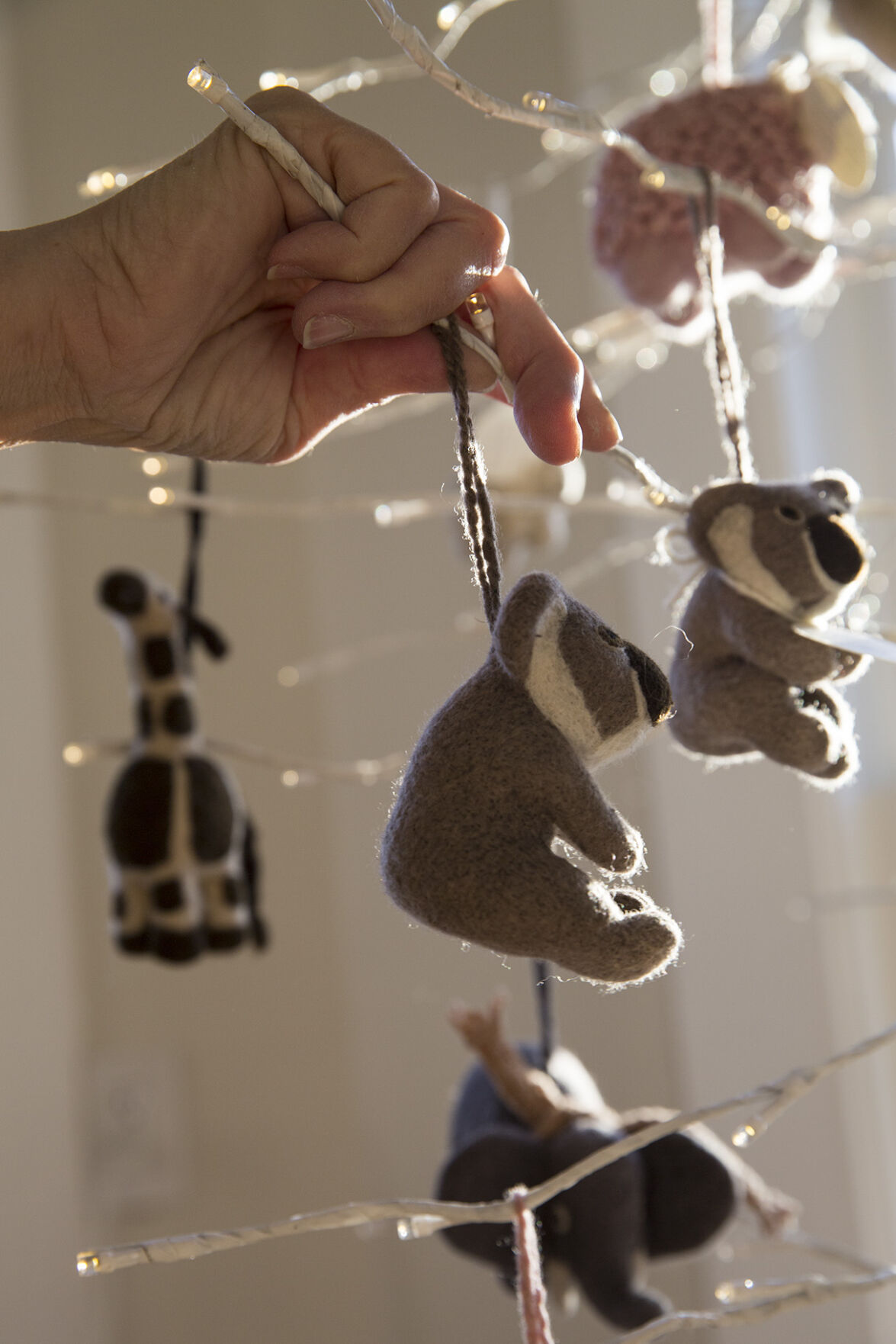 Founder and Executive Director Diana Wiley hangs handmade ornaments in the showroom at Handspun Hope on Wednesday, Nov. 18, 2020. Items in the showroom were created by women in Rwanda. MIKALA COMPTON | Herald-Zeitung 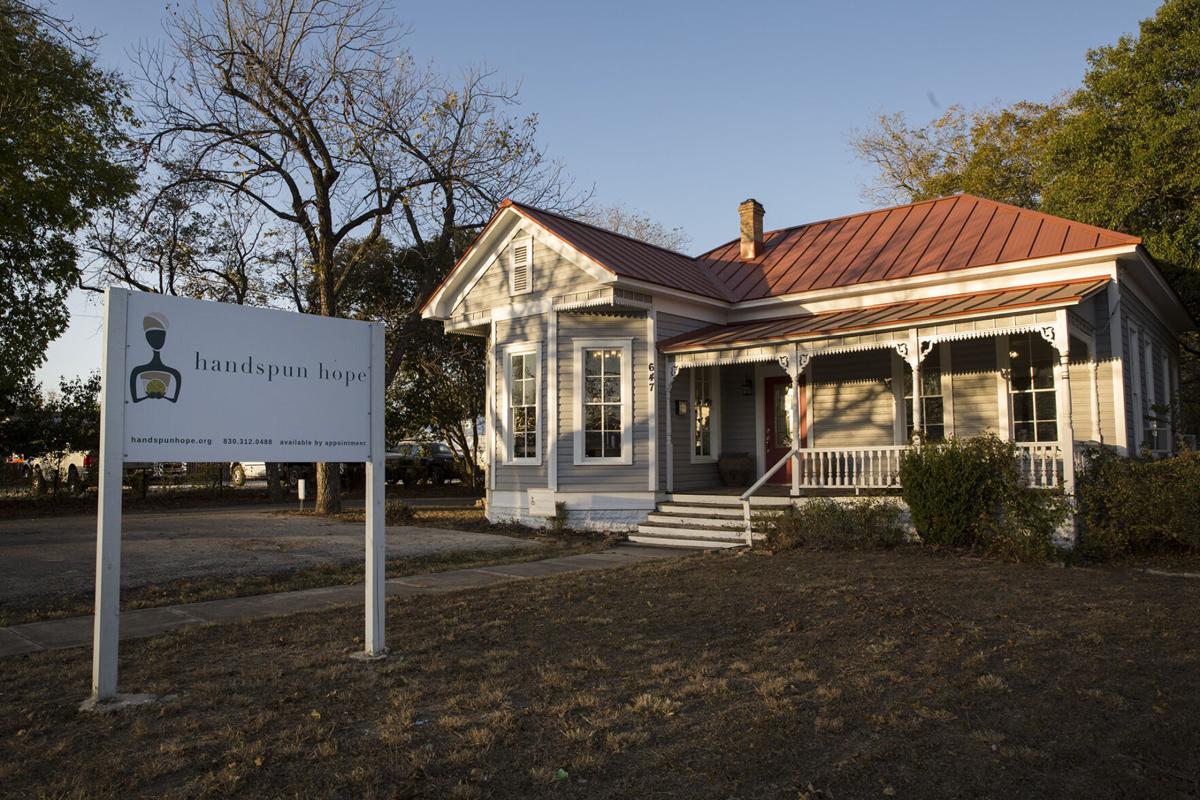 Founder and Executive Director Diana Wiley prepares the storefront for the grand opening of Handspun Hope on Wednesday, Nov. 18, 2020. The Christian nonprofit creates fair-trade jobs for women in Rwanda. The grand opening will be held Nov. 19, 20 and 21 from 9 a.m. - 8 p.m. MIKALA COMPTON | Herald-Zeitung

A sweater sits on display next to sheep ornaments at Handspun Hope on Wednesday, Nov. 18, 2020. MIKALA COMPTON | Herald-Zeitung

Founder and Executive Director Diana Wiley hangs handmade ornaments in the showroom at Handspun Hope on Wednesday, Nov. 18, 2020. Items in the showroom were created by women in Rwanda. MIKALA COMPTON | Herald-Zeitung

Intricately patterned bags and clothing made in Rwanda can be bought just a few blocks away in New Braunfels and for a cause.

Christian nonprofit Handspun Hope will open its showroom and store of high-end bags and apparel Thursday, Friday and Saturday from 9 a.m. to 8 p.m. Formerly in San Marcos, Handspun Hope’s new location is at 647 South Seguin Avenue, in the building that previously housed Lucky Ewe.

The showroom will be open Thursdays through Saturdays until Christmas, and no more than eight people can shop at one time. Shoppers must wear masks and staff will take their temperature. Individually-wrapped snacks and Rwandan coffee will be available.

Handspun Hope helps impoverished Rwandese women who survived the Tutsi genocide or whose family survived it and subsequent conflicts. The nonprofit fully employs and compensates Rwandese women of various ethnicities.

“Our goal is to give them full-time employment because many of the women working with our organization have HIV and the government provides the antiretroviral medication for free for anyone with HIV,” Diana Wiley, Handspun Hope executive director and founder, said. “But in order to take the medication they have to be earning a regular salary to eat regularly because it has adverse effects.”

In northern Rwanda, 123 at-risk women work for Handspun Hope. They are employed by salary, so they receive regular pay that is above the average salary in Rwanda, said past Handspun Hope director of marketing and current donor, Amy Brinkerhoff. Many live with HIV and also live in poverty and have families to take care of.

The nonprofit also has a Rwandese psychologist and a counselor to help the women’s mental health needs.

The women make the yarn from Handspun’s own flocks of imported Merino sheep and German Angora rabbits on its farm in Rwanda. Handspun’s farm staff teaches the women animal husbandry and how to shear the sheep.

The farm is close to the cooperative where they also learn how to spin the yarn and dye it with native Rwandan plants.

Wiley started the initiative after volunteering at a hospital and decided to quit her corporate job. She lives in San Marcos and is now in her 14th year working in Rwanda.

She said Rwanda, specifically the Musanze district where they are, is beautiful and bright, despite misconceptions. She said the government also ensures the streets are free of trash and pollution.

“People remember the genocide so they assume it’s not a safe place,” Wiley said. “It’s very safe and it’s also very beautiful and the cleanest most progressive country in Africa in terms of pollution. We’re working in the mountains and the temperature is beautiful, it’s very green and very lush.”

The nonprofit pays these artists upfront and at full price, and profits made from the products goes back into helping Rwandese women.

“It’s an online store with merchandise from artisans from other parts of Africa not made from the ladies we employ,” Brinkenhoff said. “This could be Ethiopian bags, artisans in Kenya, wood bowls. Jean Paul is a jewelry maker and he makes beautiful jewelry out of cowhorn.”

Handspun Hope and the Hope Artisan Collective are also certified members of the Fair Trade Federation, so their operation practices are heavily vetted and never oppressive.

It took them about a year to be vetted to ensure the women are paid a fair wage according to their country and they are not using slave or child labor.

Handspun Hope also accepts donations on its website. A donation of $10 provides health insurance for one woman and her family for a month, and $15 provides supplemental feed for nine sheep for a month.

Since the COVID-19 pandemic, many shows showcasing products to sell to boutiques have been canceled, Wiley said.

“COVID has been really, really, really hard on the organization,” Wiley said. “We do seasonal shows and everything has been canceled so the number one way to support is through contribution, they can also sponsor a woman.”

Sponsors can sponsor at different levels:

• Level 1 Partnership: $50 per month pays a portion of a woman’s salary

• Level 3 Partnership: $150 per month includes everything needed to employ a woman at Handspun Hope: salary, healthcare, education and counseling services

Belgian colonialism in Rwanda offset the events causing the Tutsi genocide. During colonization, the Belgians favored minority Tutsis over the Hutus. This caused the few to oppress the majority, according to History.com.

The subsequent 1959 Hutu revolution forced about 330,000 Tutsis to flee the country. In 1961, the Hutus forced the Tutsi monarch into exile and declared the country a republic.

Several years before the genocide, the CIA ignored Uganda’s backing of Tutsi exiles — the Rwandan Patriotic Front — which invaded Rwanda and set up camps.

The CIA also hailed the Ugandan president as peacemaker. Subsequent tensions between Tutsi and Hutu boiled over.

About 800,000 Tutsi were slaughtered in 1994, according to current scholarly estimates. The war-ravaged country faced extreme poverty.

Rwanda is a mostly rural country which exports coffee, tea minerals and pyrethrum.