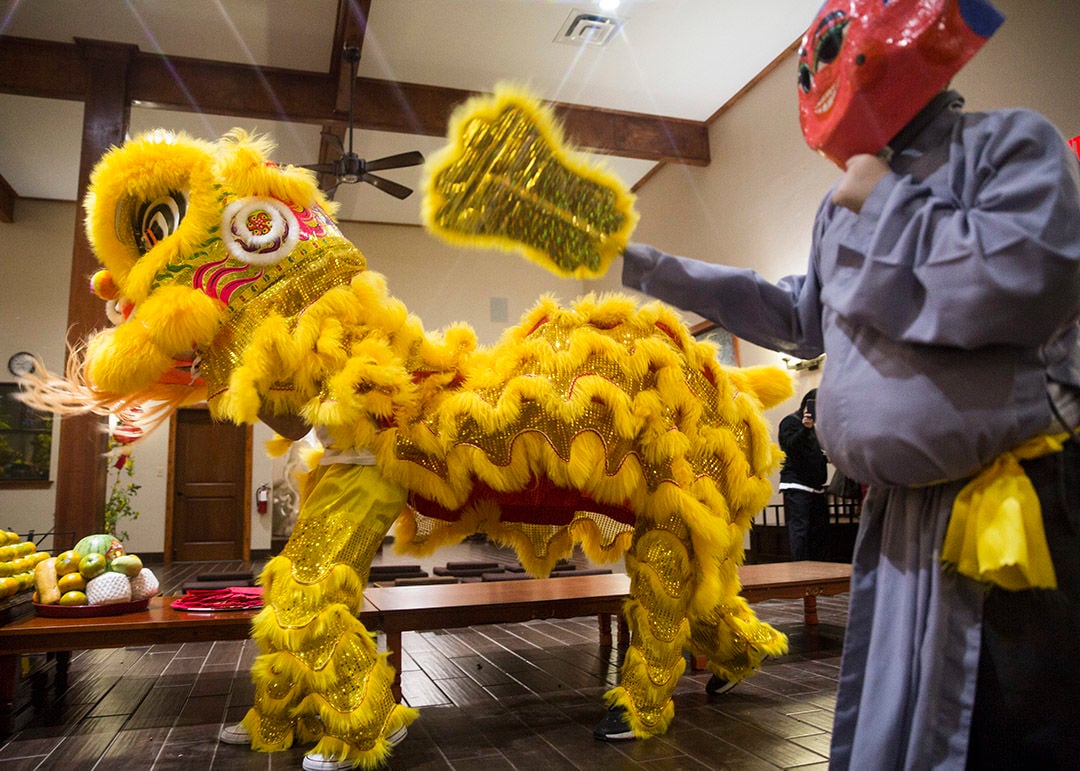 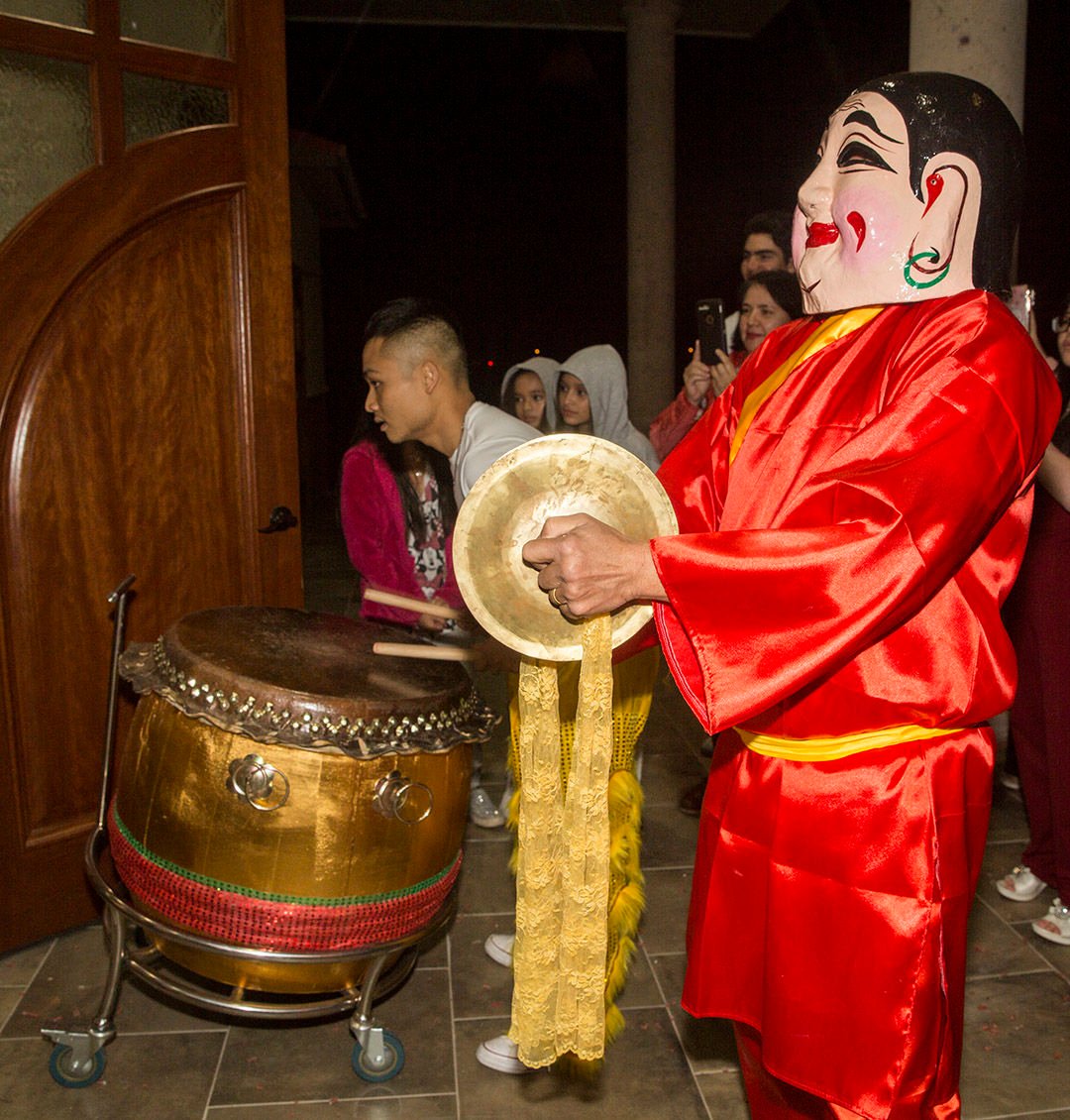 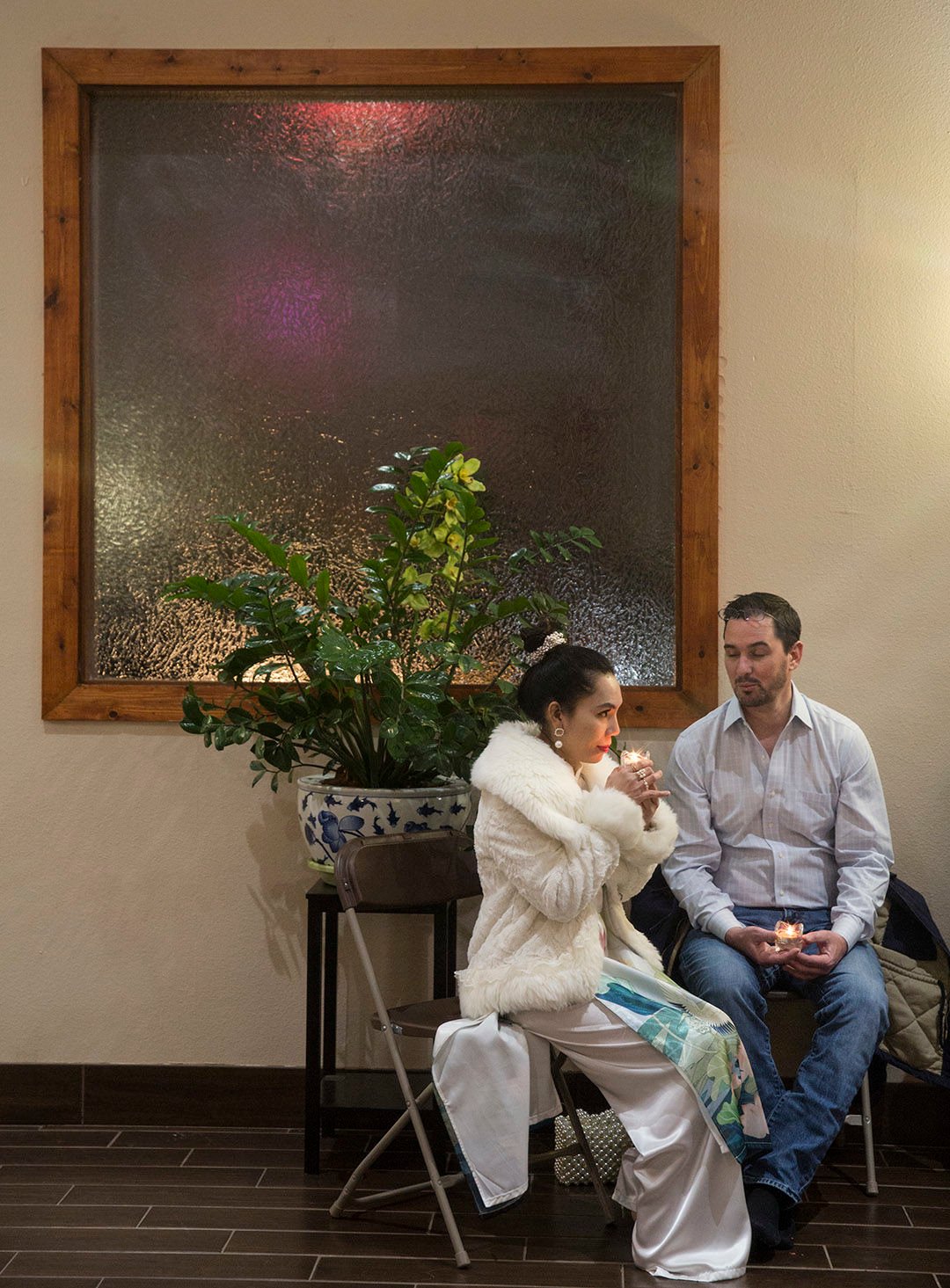 This weekend a local Buddhist temple happily chimed in the Chinese New Year which began Saturday.

On Friday, the temple celebrated with a vibrant dragon dance, lighting prayer candles for Buddha and passing out “lucky” money. 2020 is the Year of the Rat, and in Chinese Culture it symbolizes diligent working and thriftiness.

“They’re very smart,” said Thailai Nguyên, a volunteer event organizer for the temple. “It is the Year of the Rat and there are different animals and last year was the pig.”

Friday’s events left people in high spirits, bringing both regular temple goers and newcomers. The dragon dance was lively as someone dressed in the vibrant and elaborate traditional dragon costume mimicked the mythical creature.

After the dance, people in the temple sat in rows on square pillows. In the middle of the room was a long wooden table with different fruits and water bottles at the end in front of a large Buddha sculpture.

A nun read aloud a parable about a poor woman who asked for two coins from strangers. She was given two coins and bought a candle to offer to the Buddha.

Her candle burned brighter than the other people’s candles because she gave all she had to the Buddha.

After the nun finished the parable, he asked everyone to hold the candle to their forehead and pray, which they did in silence in the dimmed light. People then placed the candles at the center of the table, and the lights turned back up for a more energetic event.

The temple’s Master, in a yellow robe, handed out lucky red envelopes and a small tangerine to each person who lined up.

Inside the bright red envelopes stamped in golden lettering were $2 bills, beckoning good luck and prosperity for the new year.

“Lucky money is put inside and sometimes inside of that they have something like $5,” Nguyên said. “It’s fortune for you, like ‘Here is something for fortune here for you.’ It’s something very traditional but very cool, it’s nice.”

The tangerine represents absorbing good luck the Buddha bestows onto people in return for honoring the Buddha.

After everyone went through the line, energetic music played, including the song “Happy” by Pharell Williams.

People talked to each other, smiled and took a group photo with the temple Master and nuns.

Saturday was a quieter day at the temple, with an hour or so of prayer and traditional chanting of the sutra to the medicine Buddha.

Sutras are canonical scriptures, and Buddhists recite sutras of the medicine Buddha to pray for good health and well being. They also gave out the lucky red envelopes and tangerine for those who missed them the day before.

Some newcomers attended the ceremony on Saturday, and nun Tu Hien said the temple has a good learning environment.

Hien said those who do good are rewarded later.

“If you have less money you can give away less, but give away still,” Hien said. “When you give something away you get something back, not right now but later.”

The Year of the Rat comes every 12 years and Chinese culture says to avoid talking badly about rats or disturbing them in your home if it is their year.

Nguyên said she has a little greenhouse and takes care of various tropical plants. She said one time she suspected rats had invaded the green house.

“One day I go and the water smelled so bad,” Nguyên said. “I said ‘Golly gee, they come in here and pee in here.”

She tends to plants with fruit such as lemons and oranges, and she said the rats were giving her trouble.

“They come and take all my leaves out from the plants and off the branch and all of the leaves on the ground,” Nguyên said. “All of the fruit, lemons, kumquats and oranges were on the ground, they bite but they don’t eat and they pick all the leaves.”

Despite the mischief, Nguyên said she did not disturb the rats because it was their year.

“I said ‘Ok, I have to keep my mouth shut and won’t say anything,” Nguyên said.