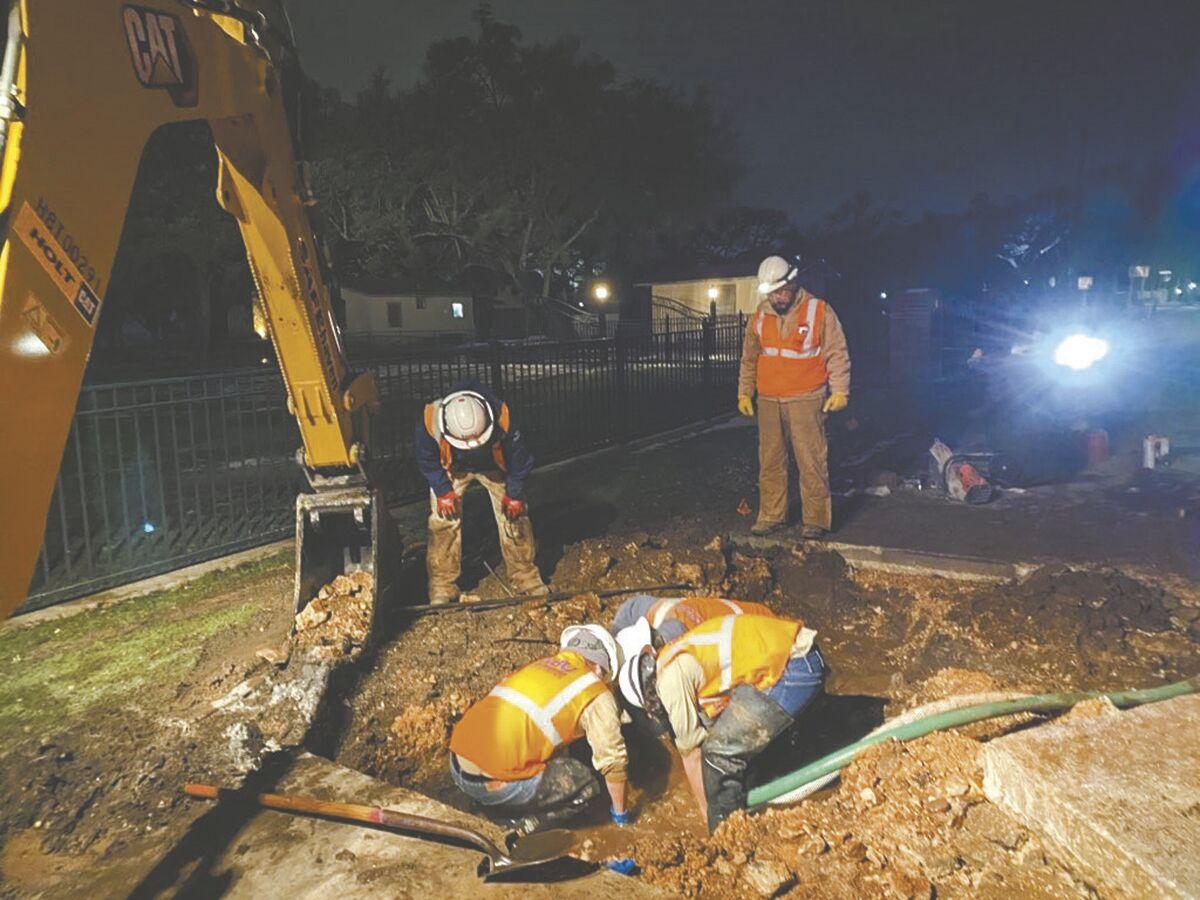 New Braunfels Utilities crews work on fixing main water line breaks on Wednesday, Feb. 17, 2021. On Thursday the utility twice asked the public to help report water line breaks in the area. NBU said breaks at residential and business structures were likely responsible for a water drain that had it pumping at rates far above normal this time of year. 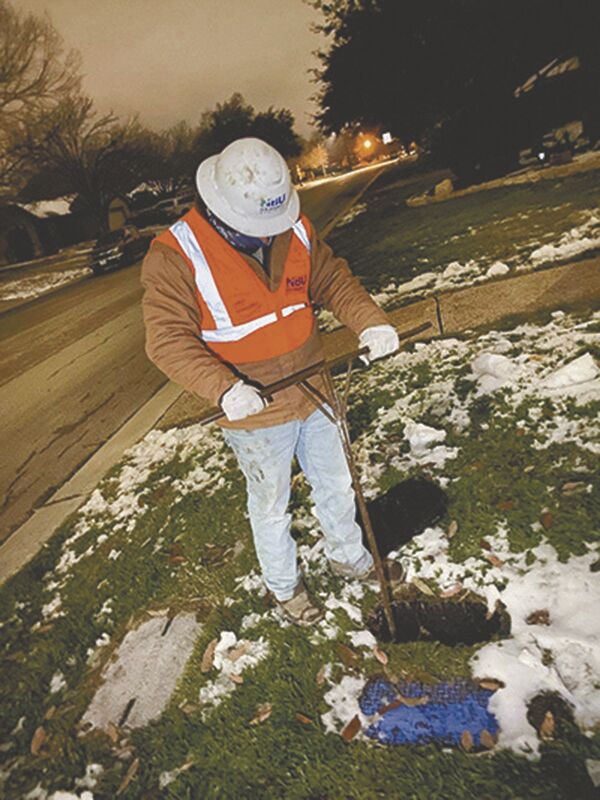 New Braunfels Utilities crews work on fixing main water line breaks on Wednesday, Feb. 17, 2021. On Thursday the utility twice asked the public to help report water line breaks in the area. NBU said breaks at residential and business structures were likely responsible for a water drain that had it pumping at rates far above normal this time of year.

New Braunfels Utilities and the city of New Braunfels setup its first water station for area residents without water in the wake of outages throughout the city on Thursday. Overnight, they announced five additional sites would be opening.

The first is at New Braunfels Civic Center at 375 S. Castell Ave. Residents are advised to enter on the South Castell Avenue side of the building. Cones have been placed to mark the route to follow.

Extreme caution is advised because roads could still be icy.

NBU said customers are under a boil water notice and will need to boil the water provided by the taps from the public water station.

NBU issued pleas on Thursday for its water customers to check their homes for leaks while crews worked to resolve the city’s low pressure and water outage issues. Similar problems have been seen all over the state.

However, NBU’s tanks are still not filling sufficiently to keep up with extreme demand, which indicates the system is losing water from household and business leaks.

NBU also said it has identified 5,000 customers whose meters were showing continuous consumption indicative of a leak.

“These leaks are making it difficult for the system’s water tanks to recover,” the post stated. “Here is where we urgently need your help, please. For customers with water pressure, please search for any plumbing issues causing leaks and turn off your customer shut-off valve; this includes irrigation systems.”

On Thursday morning, NBU kicked off an effort to visit more than 1,000 homes with the highest continuous water consumption.

Because there’s so much topography within the community, NBU said it partitions the water system into pressure zones of common elevation and closes off the zones with valves.

“We transfer water to and from zones with pumps and other equipment,” NBU said. “Currently, certain zones have fewer leaks than others, and those with more leaks are the ones where the tanks are struggling to stay full, and there either is no pressure or little pressure.

NBU said customers have been asking whether the utility is going to shut off the water.

NBU is asking customers to check around the house, including irrigation backflow assemblies, pool equipment, crawl spaces and other areas. Unheated areas, such as attics, garages and crawl spaces, are especially prone to leaks or bursting during a freeze.

Signs of leaks include damp or bulging drywalls, unusual odors or sounds from the plumbing, running or accumulating water and water meter showing usage when all faucets are turned off.

Customers who find a leak are asked to shut off the water at the main valve. People who cannot locate the main valve should call 830-608-8971.

The utility is also asking customers to only drip faucets when the temps are below freezing. It also asks people to visit their places of work to check for leaks or breaks, only if they can get out. NBU also asks people to report any incidences of water running down the street.

NBU has set up a phone bank at 830-608-8971 and an online reporting form, nbutexas.com/winter-storm-resources/ to report water outages.

Lacy Booker and her family of four live in a subdivision off Bretzke Lane. Booker said the family bathed Monday evening, and by Tuesday, their water pressure was depleting. The entire neighborhood has been without water since Tuesday. Booker said she is thankful they haven’t lost power.

“We’ve definitely conserved [electricity.] If we don’t need something on, then we’re not turning it on. We’ve been thankful there.”

It was the same for Deanna Voltin, who lives in Quail Valley with her husband and their dog. She said they experienced low water pressure most of the day Wednesday and then completely out of water that evening. And that was after seeing rolling blackouts for the last few days of one hour on and one hour off.

“We filled a bathtub (Wednesday) to be able to flush toilets if we ran out, then were told we were on a boil notice right about the same time we ran out. So the water we have has to be used for everything. (Thursday) we are collecting snow to melt to flush toilets.”

There’s been a lot of card-playing and book reading, and Voltin said they lit the fireplace for the first time since purchasing the house.

“Now we are down to only a couple logs left and too scared to get out and drive to find more,” she said. “No matter which direction we go to get out of the neighborhood, there is a bridge. My husband and I have zero experience with ice and snow, so we haven’t left.”

Earlier on Thursday, NBU said it was pumping at a rate of around 28 million gallons per day, while normal pumping this time of year is about 10 to 12 million gallons a day. The utility issued the boil notice Wednesday.

To ensure the destruction of all harmful bacteria and other microbes, water for drinking, cooking and ice making should be boiled and cooled before use for drinking water or consumption purposes.

The water should be brought to a vigorous rolling boil and then boiled for two minutes.

People may use bottled water or obtain water from some other suitable source, but NBU officials said they know that won’t be easy with electrical outages and road conditions closing many stores.

“Used properly, gas grills or fireplaces may be interim solutions for boiling water when electricity is not available.”

System officials will notify customers that the water is safe when it is no longer necessary to boil.

“The boil water notice will be in effect until NBU can ensure all drinking water requirements regarding water quality and minimum pressure are achieved,” NBU said on Facebook. “This may last several days depending on the weather, restoration of production and pumping facilities, number of main breaks or leaks and other factors.”

For more information about the boil water notice and steps to take, visit nbutexas.com/winter-storm-resources.

NBU said it had sent 9,882 boil water notice text messages, 13,352 interactive voice response calls are being made and 3,500 continuous consumption alerts are being sent.

Officials with the Electric Reliability Council of Texas, the agency that operates the state’s electrical grid, said they had made significant progress on Thursday restoring customer power.

ERCOT CEO Bill Magness said the state isn’t “out of the woods yet” — but that he thinks “we’re in a glide path.”

“We’re still in very cold conditions, so we’re still seeing much higher than normal winter demand,” he told reporters. “If we do hit a bump and have some generation have to come back off, we may have to ask for outages, but if we do, we believe they’ll be at the level where they could be rotating outages.”

There were no power outages in the NBU service territory as of late Thursday, but ERCOT officials said it is possible that some level of rotating outages may be needed over the next couple of days to keep the grid stable.

“We’re to the point in the load restoration where we are allowing transmission owners to bring back any load they can related to this load shed event,” ERCOT Senior Director of System Operations Dan Woodfin said in a statement. “We will keep working around the clock until every single customer has their power back on.”

According to ERCOT, customers who remain without power likely fall into one of these three categories:

ERCOT officials said a little over 40,000 megawatts of generation remained on forced outage due to the winter weather event.

Of that, 23,500 megawatts is thermal generation, and the rest is wind and solar.

The week has been challenging with the power and water outages, Booker said.

“It’s a challenge either way not having electricity or water, or both,” she said. “I can’t imagine, some of the people I know have lost both, and how hard that is. You definitely take things for granted that you use every day that you don’t realize you use that much.”

She said a good thing among her neighbors is that “even though everyone is going through hard times, whether it be not having electricity or water, or both, people are still trying to come together.”

“If a neighbor has something that someone else needs, they’re giving it,” she said.

“It’s nice to see people are still trying to help when they can.”