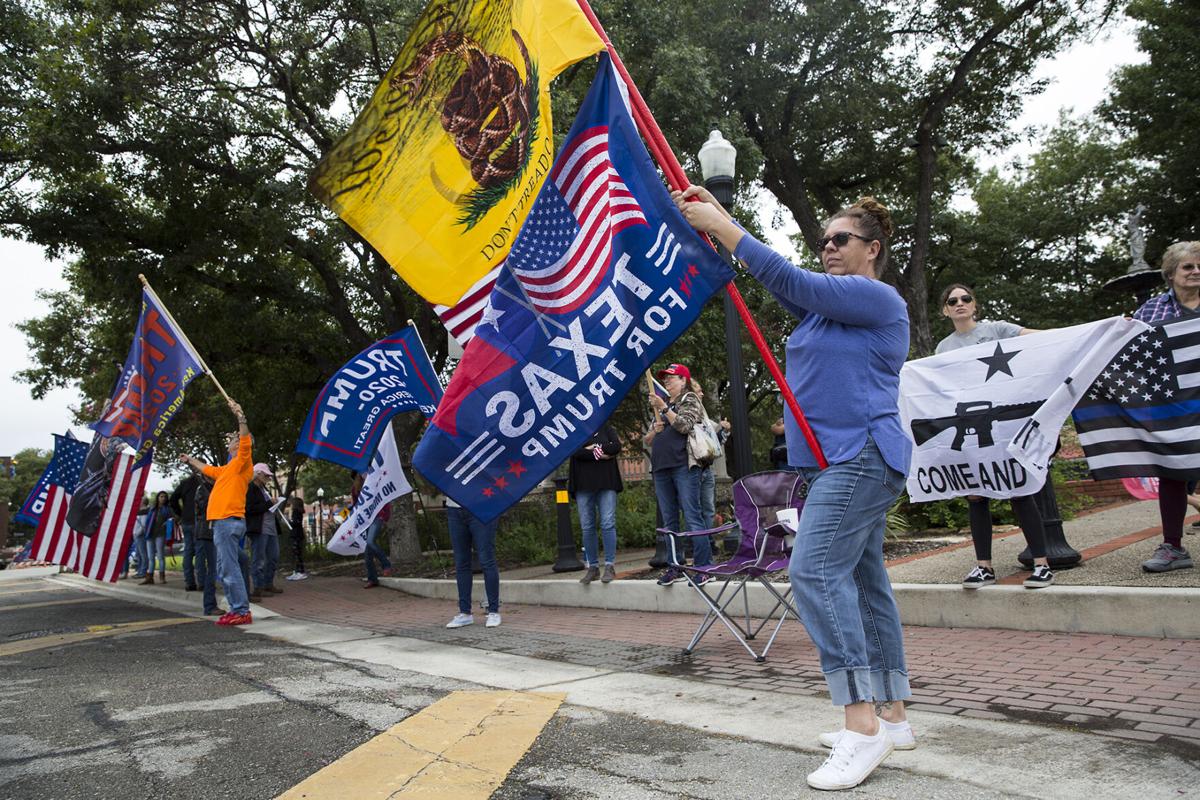 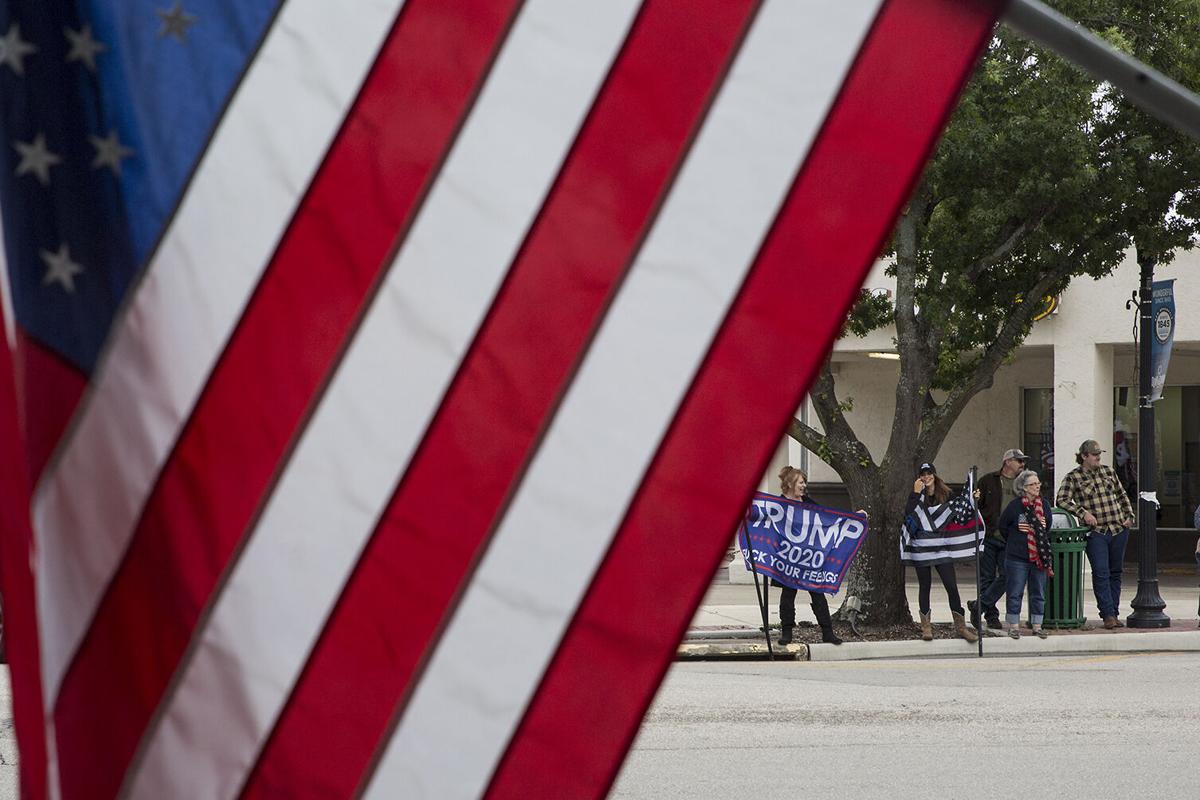 People line up around the Main Plaza to show their support during the Trump rally on Thursday, Sept. 10, 2020. MIKALA COMPTON | Herald-Zeitung 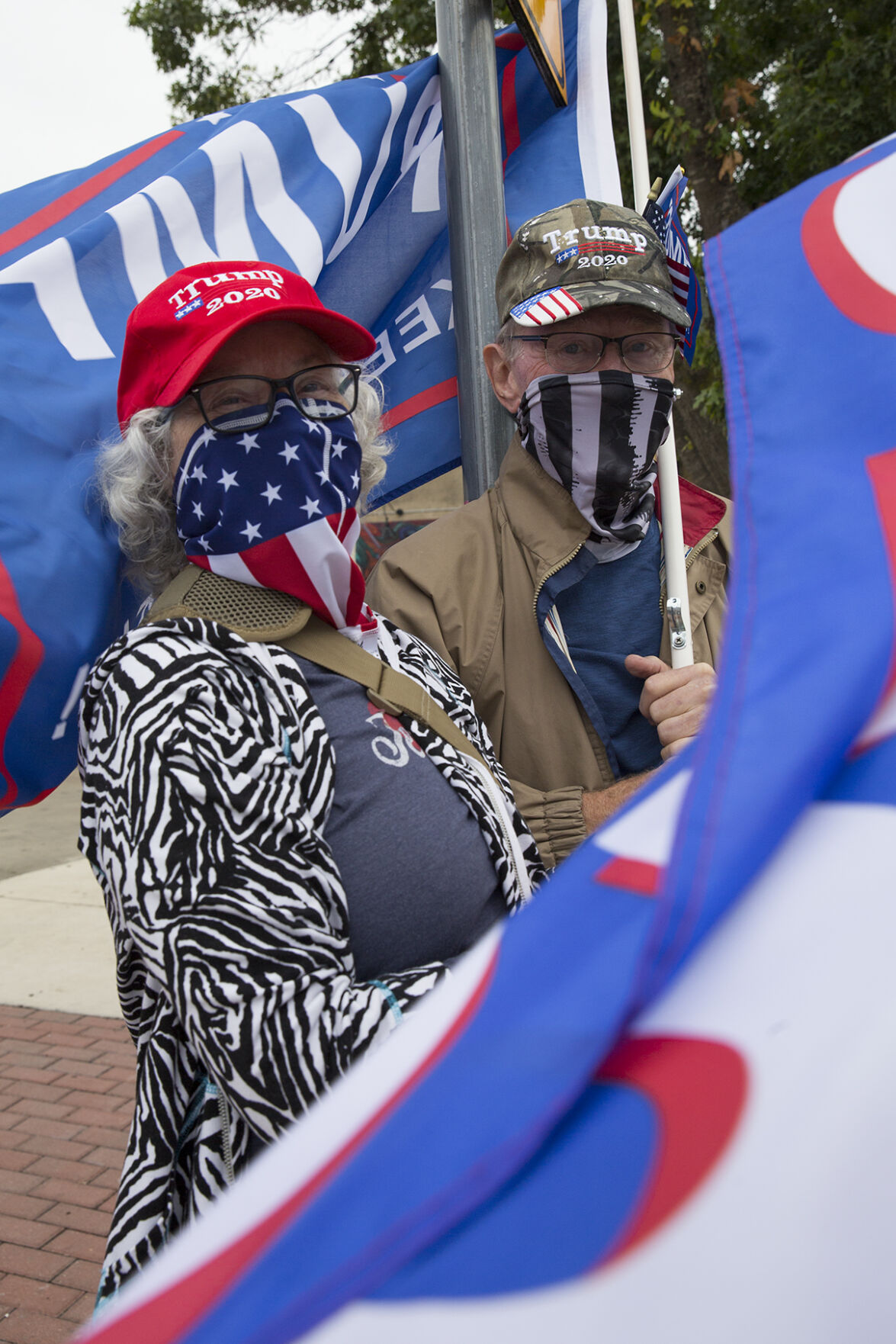 Mary and Jack Zumwalt attend the Trump rally at the Main Plaza on Thursday, Sept. 10, 2020. Mary said she came to show her support for Trump and his reelection. MIKALA COMPTON | Herald-Zeitung 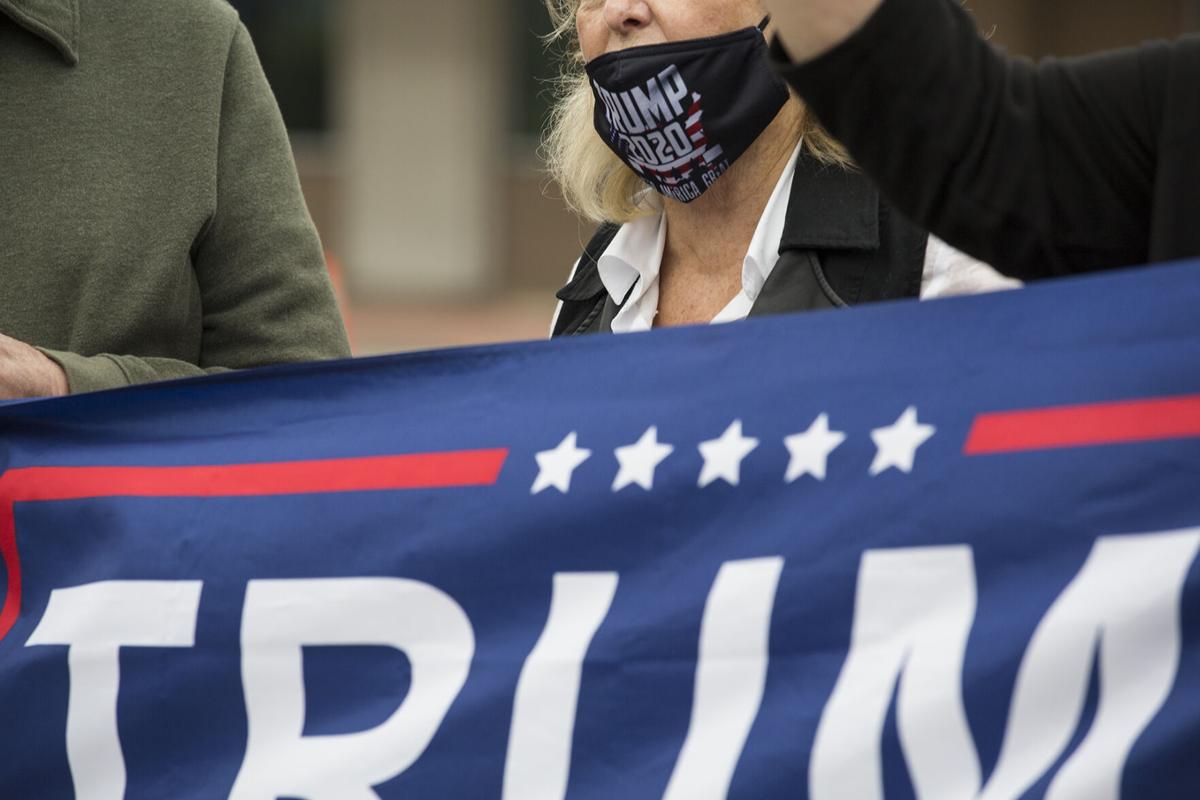 A woman wears a Trump-themed mask as she helps hold a Trump flag during the Trump rally at the Main Plaza on Thursday, Sept. 10, 2020. MIKALA COMPTON | Herald-Zeitung 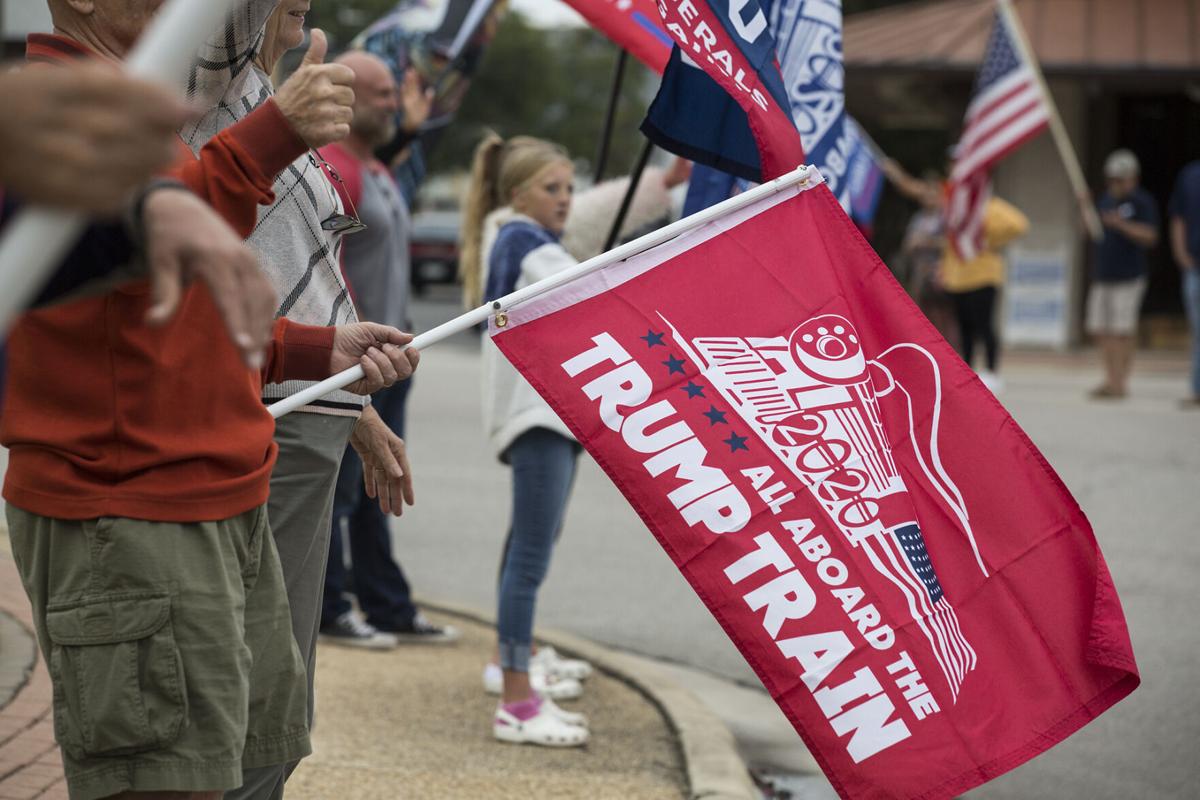 Flags wave in the wind during the Trump rally at the Main Plaza on Thursday, Sept. 10, 2020. MIKALA COMPTON | Herald-Zeitung 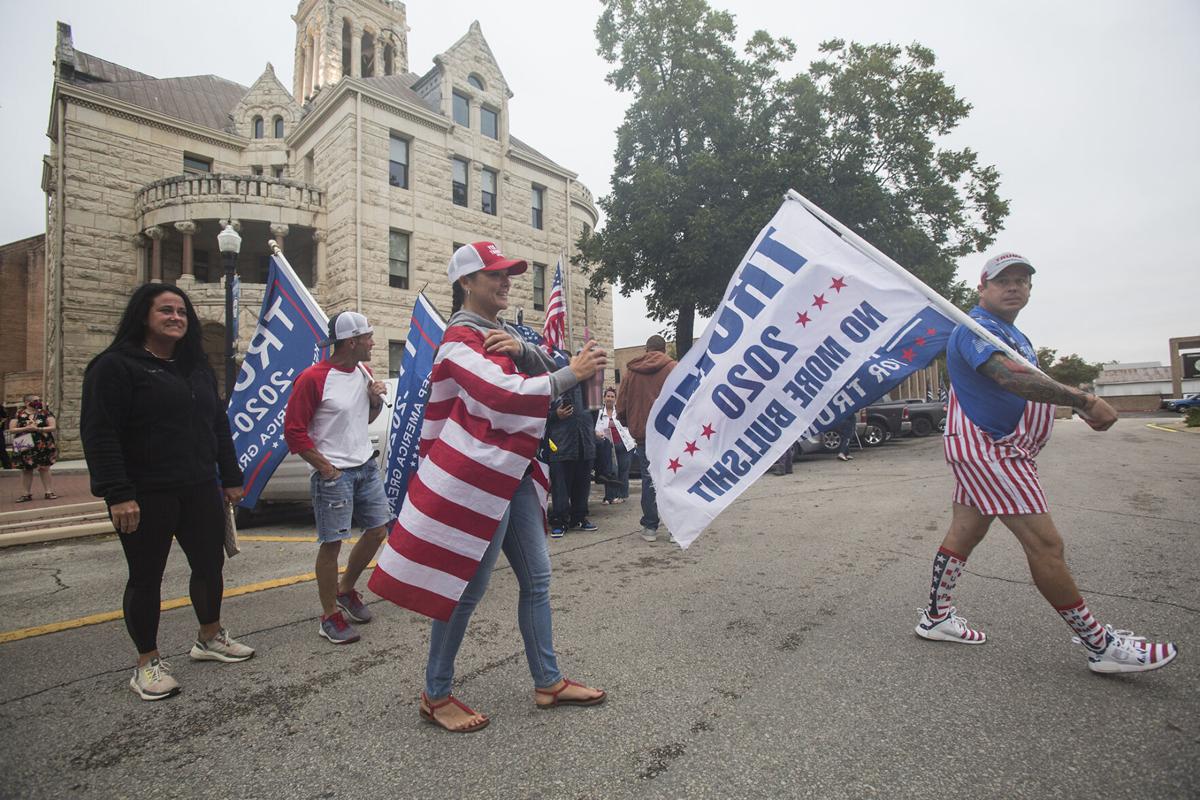 Trump supporters cross the traffic circle as they make their way to the the Main Plaza on Thursday, Sept. 10, 2020. MIKALA COMPTON | Herald-Zeitung 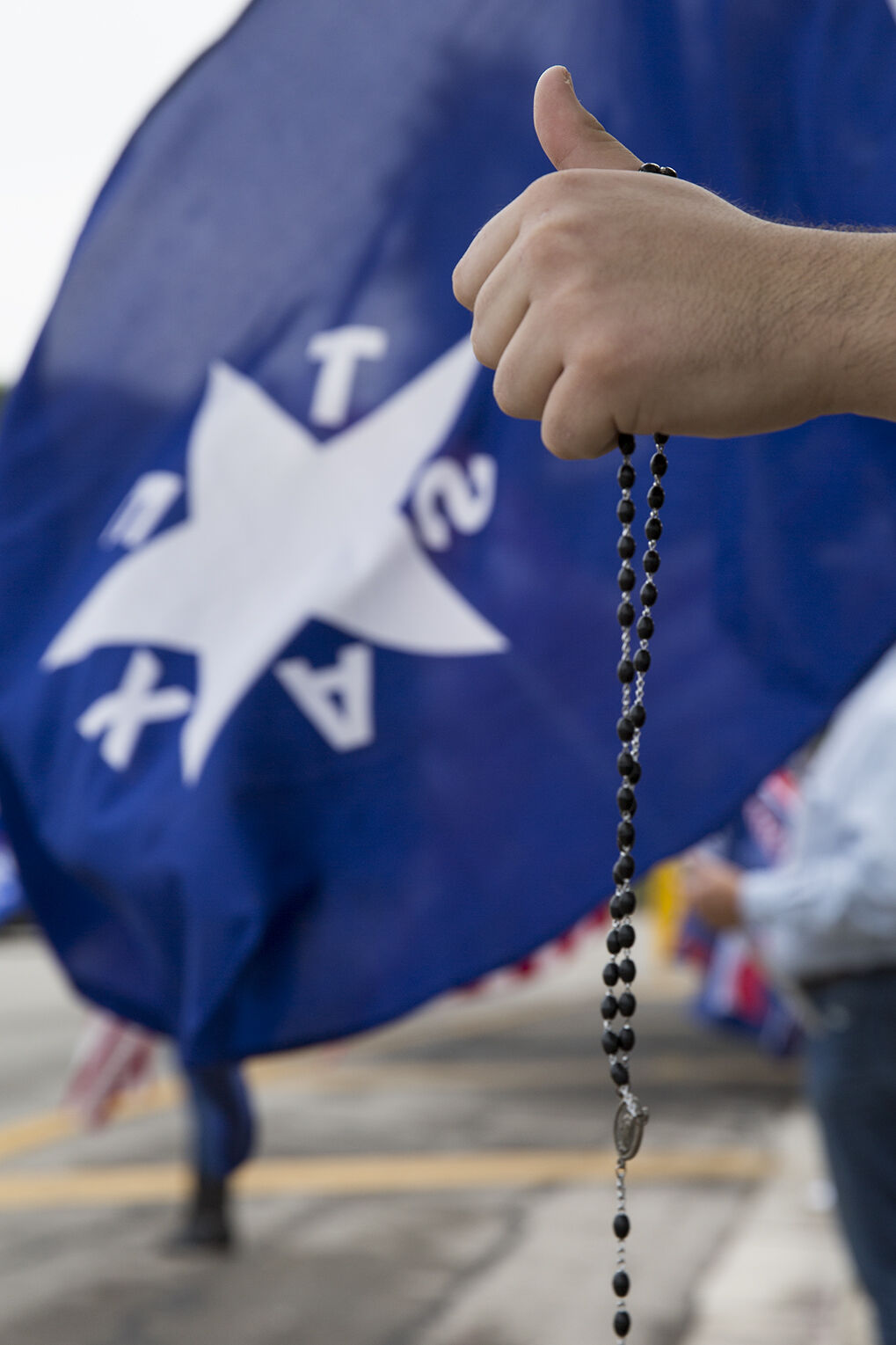 Devan Brandalick holds a rosary along with a flag as he participated in the Trump rally at the Main Plaza on Thursday, Sept. 10, 2020. Brandalick brought the rosary to show he is with the group Catholics for Trump. “I came tonight to bring peace, keep the faith and show people we want to spread peace, love and joy and talk with people,” Brandalick said. MIKALA COMPTON | Herald-Zeitung

People line up around the Main Plaza to show their support during the Trump rally on Thursday, Sept. 10, 2020. MIKALA COMPTON | Herald-Zeitung

Devan Brandalick holds a rosary along with a flag as he participated in the Trump rally at the Main Plaza on Thursday, Sept. 10, 2020. Brandalick brought the rosary to show he is with the group Catholics for Trump. “I came tonight to bring peace, keep the faith and show people we want to spread peace, love and joy and talk with people,” Brandalick said. MIKALA COMPTON | Herald-Zeitung

Trump Train supporters and local law enforcement were in downtown New Braunfels Thursday night at a pair of rallies held only blocks apart.

“That’s one of the reasons why they are not having a Trump Train because we will be honoring (the organizers) at our event tonight,” said Sue Piner, Comal GOP chair, before the event, which included District 25 state Sen. Donna Campbell, District 15 U.S. Rep. Chip Roy and District 73 state Rep. Kyle Biedermann.

“We have one event at the Civic Center and our understanding is the Trump Train is having a drive-through thing going on through Main Plaza,” Reynolds said Thursday afternoon. “It’s more or less being prepared — we hope nothing will be happening, but with everything that’s been going on — and one individual getting attention because of it — we just don’t want anything to happen.”

There were tensions after videos and photos were posted online showing a Black Lives Matter flag being dragged underneath a pickup truck at the Sept. 3 Trump Train rally through New Braunfels.

A subsequent Facebook post by Trump Train backer under the name of Casey Kennedy urged participants to be on the lookout for four black men he thought might be out for revenge. Andrae Blissett saw Kennedy’s post Sunday afternoon. He said when he saw his face among three other black men he didn’t know included in Kennedy’s post, he took it as a death threat.

“It is a threat. In my view this is the same as putting a bounty out on somebody,” the city resident and Air Force veteran said.

Blissett told a TV interviewer that his “head is on a swivel” after reading the post, which added “Everyone needs to keep their eyes open at the next Trump Train. Trust me, it might be best to be strapped … we can’t let guys like this stop any of us.”

Blissett’s attorney, who declined to be identified Thursday, said her client could only figure he was included because he responded to Kennedy’s post. She filed a report with the New Braunfels Police Department, and Wibert confirmed an investigation is underway.

“We did take a criminal complaint from one of the gentlemen who was (among) subjects in the post and we are actively working an investigation,” he said.

On Thursday evening, Blissett said he and Kennedy have since come to a mutual understanding.

“What it boiled down to is differences,” he said. “He feels one way and I feel another way. We don’t see things in the same light, but we also don’t know each other.

“Casey’s and my responses were very respectful,” he added.

“I did make a mistake with only one person in the pic and that was Andrea (sic). I’ve sent him a message of apology. And have ask(ed) a mutual friend to send the message to him as well because I was blocked from his page.

“I will admit if I’m wrong about something. All I wanted to do was let a group of (people) know they could have problems with these guys. That was it. And to watch their six (backs) because these guys were mad about some BS that happened at a Trump train run with a guy that had a BLM sign under his truck.”

“I do apologize for adding you to this. I made that mistake and will admit it.”

Kennedy could not be contacted for comment. Blissett on Thursday said he accepted Kennedy’s apology.

“I love peace and I stand on the side of acceptance, peace and unity,” he said.

Wibert referred to a recent statement from City Manager Robert Camareno, which in part read: “The city of New Braunfels and the New Braunfels Police Department unequivocally condemn any acts of racism or hatred, and want all residents to feel safe in our community.

“These matters are taken very seriously and if any of our citizens feel threatened, we ask they contact the NBPD to file a police report, at www.nbtexas.org/police or calling 830-221-4100.”

“In recent days, New Braunfels has experienced divisiveness. Some members of our community have felt attacked, demoralized, misunderstood and concerned,” Mayor Rusty Brockman said in a statement. “This is not the New Braunfels that I know and love. Our community is known for its caring and supportive personality.Comal GOP chair backing Trump Train Piner said she didn’t know much about the flag-trampling incident until recently.

“The mayor’s statement was a little confusing,” she said. “I’m a Trump Trainer and I think it’s great because of its visibility in the community and shows our spirit for Trump.

“I didn’t realize the BLM flag (under the truck) because you couldn’t even read it,” she said. “I thought it was a Trump flag that had fallen off – the truck had about 10 flags on it; it was unfortunate a BLM flag (was involved).

“I’ve only missed one of the Trump Trains, which I found very patriotic and encouraging,” she said. “There are a few naysayers that have popped up … but the founder in his announcement last week encouraged people not to honk when going (past certain city areas).”

“The plan is to move there, where they will be able to view each truck to make (they carry) nothing inappropriate,” she said.

Efforts to reach Trump Train organizers Steve and Randi Ceh through Piner were unsuccessful Thursday afternoon, as finishing touches were applied ahead of Thursday night’s fundraiser.

“Trey Gowdy will be the star of the show and we’re eager to hear what he has to say,” Piner said. “As a Fox (News Channel) commentator he’s very much in touch with current political happenings. We’ve sold out — even though the virus cut seating from 900 to 490 seats. But we’re ready for a great event.”

Blissett said he wanted everyone to know where he stands.

“We’re all Americans and we all must be for life and love, and that’s what I put out there,” he said.

The Trump train is a loud and eminent catastrophe, already carrying the corpses of 190k Americans