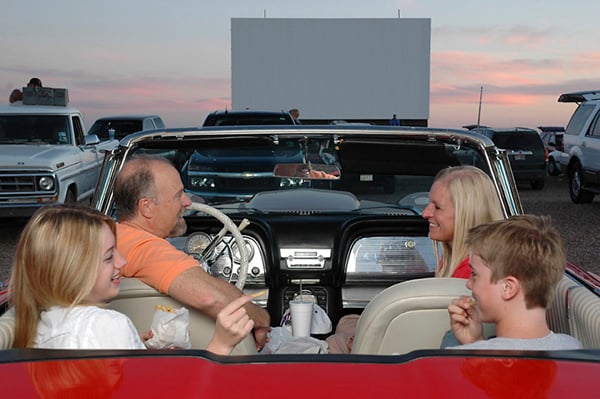 The Stars and Stripes Drive-in Theater, featuring a multi-screen, all-digital experience, is set to make its debut in New Braunfels in the summer of 2014. 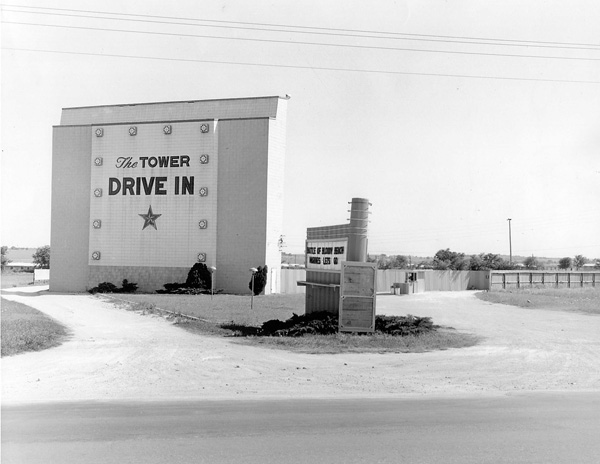 The Tower Drive-In, which once stood on Elliot Knox Boulevard, directly across from where the New Braunfels Ninth Grade Center, was the place to be on a Friday night back in the 1950s in New Braunfels.

The Stars and Stripes Drive-in Theater, featuring a multi-screen, all-digital experience, is set to make its debut in New Braunfels in the summer of 2014.

The Tower Drive-In, which once stood on Elliot Knox Boulevard, directly across from where the New Braunfels Ninth Grade Center, was the place to be on a Friday night back in the 1950s in New Braunfels.

Some remember the drive-in movie ... piling into a car and hooking up a gray speaker box to a car window that was probably rolled up and down with a turn handle. Others have seen the drive-in theater only in movies.

“That’s how my familiarity with the drive-in started. I saw the drive-in on the movie ‘Grease,’” Ryan Smith said.

But that’s not the whole story. Smith comes from a family — that began with his great grandfather — that is in the business of drive-in movie theaters. Smith built the Stars & Stripes Drive-In Theatre in Lubbock with his two sisters in 2003. In 2011, he updated the technology, and the Lubbock drive-in became the first theater in the world to present a multi-screen outdoor experience that was all digital. That was April of 2011.

Now Smith is bringing a second, all-digital Stars & Stripes Drive-In Theatre to New Braunfels. The outdoor movie theater is scheduled to open in the summer of 2014.

The drive-in will be located behind Resolute Health and will offer three screens and the latest movies. The theater will be located at Farm-to-Market 1101 and Kroesche Lane.

Smith said the digital experience will bring back the well-loved family pastime of watching movies on the outdoor screen, while presenting it in the best format possible.

“Part of the problem with the outdoor screen is getting enough light on the screen so that you can see it. Digital has changed that,” Smith said.

The gray boxes are no more, although some drive-ins have kept them around simply for nostalgia’s sake, Smith said.

“The sound is supplied through surround sound and through a radio station frequency, so patrons can listen to the sound from their vehicle’s stereo speakers,” Smith said.

He added that patrons would be able to enjoy movies from the comfort of their cars or lawn chairs.

“His father helped him build it,” Smith said.

Eventually, the theater was sold to a good friend, Sam Kirkland, who has revitalized it. It wasn’t until 2002 when Smith saw a movie at the Sky-Vue.

He left law school and built the Stars & Stripes Drive-In Lubbock. Just like his grandfather, he was 25 at the time.

In 2011, Smith converted the 35 mm movie theater in Lubbock to all-digital technology. It was not an inexpensive feat, as other drive-in theater owners across the country have discovered. According to a press release, there were 4,000 drive-in movie theaters in 1950. Today, there are 370. Smith said he knew he had the support of the public when he converted to all-digital.

“Lubbock is a community that will support a drive-in for years to come,” he said. “We are open year-round and are able to offer a variety of movies on different screens.”

Smith said the same was true of the New Braunfels location.

“There’s no other place in Texas that truly embraces its culture and history like New Braunfels,” Smith said in a press release. “Mix it with the city’s family-centered atmosphere, and it became the right town for a new drive-in theater to call home.”

Smith said movie-goers could expect to see all the newest movies.

“We will offer family, comedy, action movies and more,” he said.

“People aren’t going to wait for months to see a new movie, like they did in the past,” Smith said.

While he didn’t have prices just yet, Smith said the drive-in would offer great values.

Two of the screen towers will measure more than 90 feet wide and will be the largest movie screens in Texas.

In addition, the drive-in theater will offer a 1950s café, patio and playground.

“We also made sure we are offering a fair deal on concession prices,” Smith said.

And just like in the movie ‘Grease,’ kids will be able to swing on the swings while watching a movie.

Smith said there also would be options for special presentations at the drive-in.

“Right now, we are showing the movie ‘Jaws’ in Lubbock because so many people remember watching that movie at the drive-in. And of course, going to the beach was never the same.”

Smith said he knew that nostalgia was a big part of the drive-in movie experience, which is why he is working with The Sophienburg Museum and Archives to gather favorite memories of Tower Drive-In, which once stood on Elliot Knox Boulevard, directly across from where the New Braunfels Ninth Grade Center is now.

“Mike and I had our first date at the Tower Drive-In,” said Linda Dietert, The Sophienburg director, in a press release. “It was the place we hung out on Friday nights — and it holds special memories for us.”

In 1950, during the grand opening day of the Tower Drive-In, each patron got a free pack of Beech-Nut gum, Dietert said.

Smith said he wanted to reclaim the drive-in tradition and share the experience with a new generation.

“It is part of the American and family experience,” he said.